It looks like one woman may be responsible for having the most damning evidence against the Trump Organization in the ongoing Manhattan District Attorney Office’s investigation into the company and how employees’ compensation was handled. Jennifer Weisselberg, the ex-wife of Trump employee Barry Weisselberg, apparently testified and handed over documents that helped prosecutors follow the money trail, according to the Daily Beast. 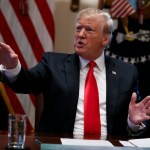 The allegations involve the Trump Organization freely handing out corporate gifts, including private school tuition, luxury rental apartment payments and use of vehicles, instead of raising their employees’ pay. This helped the company avoid paying taxes on those additional funds and allowed the individuals to also do the same, even though the IRS considers this a part of taxable earned income.

While Donald has not been charged by the DA’s office, Jennifer is claiming that the former president is well aware of this financial strategy because he not only signed the checks, but was present at a January 2012 meeting where Jennifer, Barry, and CFO Allen Weisselberg discussed getting her children’s $50,000 private school tuition to Columbia Grammar and Preparatory School paid. Jennifer alleges that Donald assured her, “Don’t worry, I’ve got it covered,” per Daily Beast sources.

The couple’s 2018 divorce also seems to support her claims because Barry discussed how these perks were a part of his compensation package working for the Trump Organization. And this reportedly helped investigators form a case against his father, who will likely not be the only one charged in this case. The investigation remains in the hands of the Manhattan DA, who is leaving no stone unturned at the Trump Organization.

SheKnows reached out to the Trump Organization for comment.