As two singers rising through the close-knit world of Philadelphia’s most acclaimed conservatories, Steven LaBrie and Jarrett Ott knew each other in passing. But on one raucous night in 2009, when Mr. Ott joined the celebration of Mr. LaBrie’s 21st birthday — an evening of tequila, dancing and after-hours pizza — their friendship was sealed.

Both baritones, Mr. LaBrie, now 32, and Mr. Ott, 33, stayed close as their opera careers began to blossom. They and their partners lived near each other in Astoria, Queens, for a time, and Mr. LaBrie and Mr. Ott worked out at the same gym. In 2018, with fellow baritone Tobias Greenhalgh, they released “Remember,” an album of songs by American composers.

That year, their paths split. Mr. Ott started a full-time job in the ensemble at the respected opera house in Stuttgart, Germany. Mr. LaBrie remained based in New York, a freelance artist with a growing reputation.

This divergence made all the difference when the coronavirus hit. With performances canceled around the world, Mr. LaBrie’s income fell to nothing; he hasn’t had health insurance for years. But across the Atlantic, support from the German government meant that Mr. Ott’s position was safe, his pay almost unchanged and his benefits secure.

In separate interviews, they spoke about the impact of the pandemic — and political responses to it — on their lives and future plans. These are edited excerpts from the conversations. 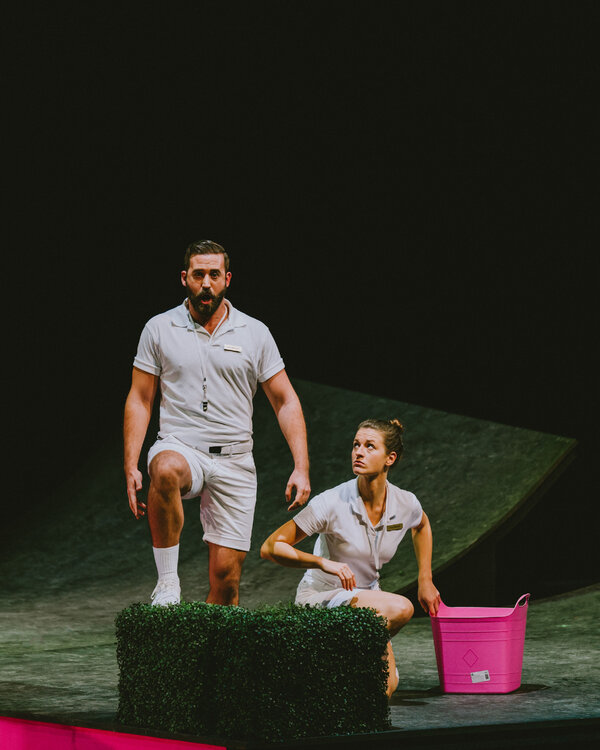 I started when I was a teenager as a mariachi singer. My mother is Mexican, and she encouraged it. We would drive around Dallas to all these restaurants, and there were bands you could go up and sing with. And once I became a professional singer, I loved the lifestyle. I loved traveling; I loved being different places with different colleagues.

A year ago, in December 2019, I was making my European debut. (I had sung in Paris, but on tour with New York City Ballet, so I’m not counting that.) I had gone on a German audition tour, and the head of the Erl Festival in Austria hired me to sing the Hunter and Innkeeper in “Rusalka” at the end of 2019.

At the opening night party, I was immediately rehired for an obscure opera by Offenbach that hadn’t been performed since its premiere in Austria. It was a huge role, a huge thing for me. But since Covid happened, they decided that because of budgetary reasons they were cutting the show. And my hope for my singing career in Europe dwindled away. I was going to make my debut on the main stage at Carnegie Hall, and that flew away, too. A career is built one milestone at a time, so what now? I streamed a video performance, but I found it’s really difficult to get people to commit to watching any self-produced online content.

I’ve been a lucky person in some ways. I have a partner, who’s also a musician but has a steady income as a coach at Juilliard, a pianist on the Met’s music staff and a recitalist. And losing my income — most years I probably made about $50,000 before expenses and paying my manager — wasn’t as much of a blow as some people who have a house they own, or children. I qualified for pandemic relief, and got the $1,200 stimulus.

I don’t feel like the government has ever supported the arts. I pay high taxes, because I’m a self-employed person. That comes with many expenses and it’s difficult to get ahead financially when there are so many people a singer needs to employ to help him succeed. Since the beginning of my career, I’ve been told that the opera industry has been facing hardships and that fees have gone down, which makes me wonder if opera at some point will just be a hobby for people who already have a safety net.

I kept thinking, what can I do with this time? I went straight to the Academy of Vocal Arts after high school; I’ve only ever known singing. What can I do with no degree? What the coronavirus has shown is that we’re not confined to staying put in one location anymore. We can do anything from anywhere in the world. I read a lot about people who made a career transition into tech. And I began looking into software engineering. I started learning a coding language, and did that the entire summer.

Now I’m what they call a “resident” at a software engineering immersive program called Codesmith. It’s an intensive program for three months that takes you up to being hired at a high level, mid to senior.

I’m not leaving singing. I’m preparing myself for having a skill set in an industry with a lot of opportunities and straddling both worlds. This idea people have, that you’re either a singer or not a singer, it’s just not the truth. And now, more than ever, it can’t be the truth.

I really do believe I’m coming out of this feeling so much more empowered. I’m relying on myself to invent my future, as opposed to feeling I’m the victim of a system. I’m not saying I’m always at the computer with glee. I have shed a tear or two for my life and career. But at the same time, you have to keep moving forward. My dream has always been, and will always be, to be a singer. But now I have more than one dream.

The main thing when you’re in an ensemble is to get so many roles under your belt. You can be singing three at the same time. No matter what training you get in the United States, nothing prepares you to be a full-time singer at a single company. A freelancer can hop among companies, but you’re never rehearsing one show in the afternoon, going into another show at night and in the morning a third. One time, someone got to perform in another house, so I was asked to do two Marcellos in the same day in “La Bohème.” It’s not always ideal circumstances, but it’s such a life-changing experience.

It’s a full-time position, salary based. Full health benefits. Singers in Europe can afford to live off this salary, but it’s assumed that you’re also going to have some contracts at other opera houses. But this year, I watched my American engagements go in a dumpster, and I was still able to completely put food on the table and pay my bills. After taxes — about half is taken out — I earn about €2,500 ($3,050) a month.

I did my first performance ever of the Count in Mozart’s “Le Nozze di Figaro” on March 8. Our next performance was going to be the 13th, and we were locked down on the 11th. I didn’t know what to do. I didn’t want to be locked down away from my husband and my dog, in New York City, so I flew there on the 13th and did the initial lockdown there.

I got the call, I think it was in the middle of May: “Would you want to come back and do a recital?” And at that point I was going crazy in a New York apartment, so it was: “Dear God, yes.” I arrived on June 1 and did a very strict 14-day quarantine. June 15 I could leave that, and the recital was June 19, in front of 100 people. It wasn’t even in the opera house; they didn’t have that figured out yet. It was at the Liederhalle, another performance space which the opera sometimes uses for concerts.

Mine was one of the very first recitals. I think three or four other people got to do it, and then they started reducing the audience again slowly. And they did two almost-productions here before another lockdown started in the fall. We thought we might be able to do concert versions of “Madama Butterfly” in December; obviously that went away. We’re hoping to do them in mid-February, but that is also not looking like a possibility right now.

But through this uncertainty, we are all paid — by the opera house, but also by the state. None of our benefits have gone away. For two months, we’re on what’s called “Kurzarbeit” — “short work” — when the government pays about 80 percent of our wages and then the opera makes up a various amount for each individual. I’m making 98 percent even during Kurzarbeit. I canceled my American health insurance in June. I’ve been going to the doctors here whenever I’ve needed. And I don’t have to pay extra for that; there are no co-pays or after bills.

It’s hard to see my colleagues in the United States not have hope for the spring. Here we luckily still do. And a lot of my friends are doing what Steven is: They haven’t jumped shipped completely, but they’re in the tech world right now, while I haven’t had to really re-evaluate my career.

Could I use some extra income? Sure. There was a lot of money lost last year. But I am so incredibly grateful to have this position here. It’s a lot of work, but man, is it worth it.