Rita Rudner’s bio begins with Broadway because that’s where she got her start, in the 1970s. Before she made her name as a comedian, she was a dancer, singer and all-around funny lady in shows like “Promises, Promises,” “Annie” and “So Long, 174th Street.” Also “Follies,” by the way.

In the anodyne new musical comedy “Two’s a Crowd,” at 59E59 Theaters Off Broadway, her stage chops are unmistakable; likewise her spiky-soft charisma paired with immaculate timing. There comes a playfully sexy moment, too, when you glimpse a shadow of the young Ms. Rudner who was cast as a bathing beauty in “Mack and Mabel,” 45 years ago. It’s hard not to think: What if she had stuck with acting?

“Two’s a Crowd,” which has a book by Ms. Rudner and her husband, Martin Bergman, and music and lyrics by Jason Feddy, is lesser material than she deserves. That it makes, on balance, an innocuously pleasant evening is in large part a credit to her skill as a performer.

Good-natured though it is, this show, directed by Mr. Bergman, has a throwback aura. There’s even a Dom Pérignon/Dom DeLuise joke, which got a healthy laugh at the performance I saw. Target audience: the nostalgia demographic.

The setting is a Las Vegas hotel, where Wendy (Ms. Rudner), a 60-something Cleveland wedding planner whose own marriage is a freshly smoldering ruin, arrives to discover that the room she reserved — a relic of midmarket, midcentury modern glam (the set is by Tessa Ann Bookwalter) — has been double booked. 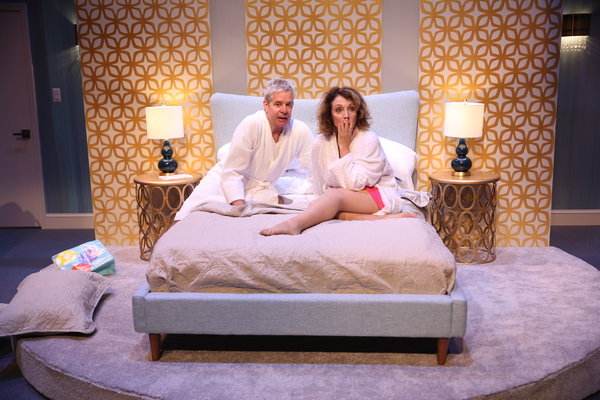 The primly combative, tastefully put-together Wendy can either catch the next flight home or share the room with Tom (Robert Yacko), “a poker-playing, dirt-biking electrician-philosopher” whose aesthetic is suburban sloppy. She stays, though their mutual fondness for flinging stale personal insults makes the first couple of scenes rough going.

But this is a meet-cute. Underneath the baggy Batman T-shirt and the attitude, Tom is age-appropriate with his own broken heart, and bunking together starts to seem not such a hardship. That’s when we glimpse the stage ingénue Ms. Rudner once was, as Wendy enlists her bathing-beauty legs to wordlessly, amusingly signal her desire.

The title page of the script calls “Two’s a Crowd” not a musical comedy but a comedy musical, and that’s about right. You could also just call it a sitcom with songs, which come in a grab bag of styles: country, folk-rock, rock and show tune. Led by Mr. Feddy, a guitarist with a rumpled charm, the three-piece band has, somehow, an analog sound that whisks the audience right back into the ’70s — in a good way.

The plot is silly and the fast-paced dialogue doesn’t aim much higher than variety-show sketch quality. Yet “Two’s a Crowd,” whose cast also includes Kelly Holden Bashar and Brian Lohmann in multiple supporting roles, has a soothing sense of fun as it takes the long-haul view of life and love.

As for the long-haul view of Ms. Rudner’s career, there are more and better roles for women onstage and onscreen than there were just a short time ago. It might be a fine thing for all of us if some of those went her way.

When you purchase a ticket for an independently reviewed play or musical through our site, we earn an affiliate commission.