When I learned I’d be sidelined by surgery for six weeks, I thought I would use the time to catch up on some of the things you miss when television is your occupation — movies, books, sunshine. But who was I kidding? It was the perfect excuse to watch even more TV.

With additional time to binge (like a normal person), I had the pleasure of discovering or catching up on things that otherwise would have slipped past. Here are some highlights from my convalescent viewing: current or recent shows I wouldn’t have gotten around to writing about if I’d been on my feet. 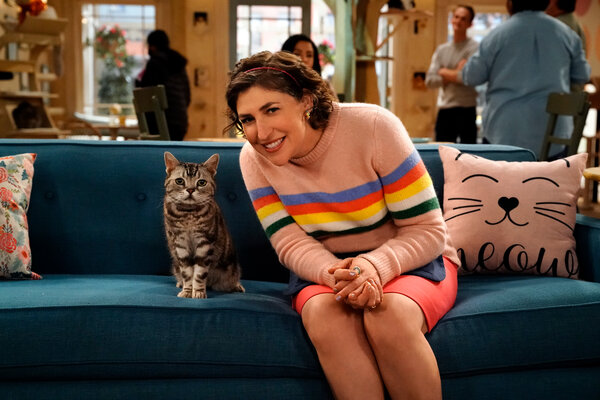 Mayim Bialik’s new sitcom, which recently finished its first season, is a remake of the British show “Miranda,” with Bialik playing a less acerbic and more grounded-in-reality version of the loopy shop owner played by Miranda Hart in the original. Some things have changed — the shop is now a cat cafe rather than a novelty gift store — and some, unfortunately, have stayed the same, like the icky gimmick whereby the cast breaks character to mug and wave to the camera during each episode’s closing credits.

That’s close to a deal-breaker, but I found myself coming back to “Call Me Kat,” a show that doesn’t break any ground but occasionally locates some wiggle room for genuine feeling amid the sitcom formulas. (It has that in common with Chuck Lorre’s “Bob Hearts Abishola” on CBS.) Bialik, better cast here than she was in “The Big Bang Theory,” is charming and funny as Kat, who’s an equal mix of effervescence and insecurity; she has a trouper’s facility with the punch lines and a smart habit of underplaying the zaniness. In the season finale, Bialik’s obvious, bashful delight in her show and her fellow cast members even redeemed the credits dance.

This new drama about an independent and idealistic lawyer in Charlotte, N.C., fills the prime-time soap opera vacancy left when “Greenleaf” ended its five-season run on OWN last year. And it keeps everything in the family: Like “Greenleaf,” which traced the intrigues at an enormous Memphis church, “Delilah,” currently halfway through its first season, was created by the writer and producer Craig Wright.

The virtues of the series have to do with solid construction and credible plotting and characters, with satisfaction rather than excitement — it gets the job done without insulting your intelligence. Maahra Hill, in her first shot as a series regular, let alone star, brings an appealing tartness and determination to the title character. She also works well with Jill Marie Jones, who plays a best friend and opposing lawyer reminiscent of Yvonne Orji’s Molly in “Insecure.” And despite what look like the constraints of budget and pandemic shooting, the first-season arc involving a cover-up of defective military equipment has been fairly tense.

The Covid-19 pandemic showed up as a plot point in a lot of shows this season, but most paid it lip service, having characters ostentatiously don masks on the way to procedural business as usual. “For Life,” on the other hand, took a thoughtful, tough-minded approach, sending its hero, the one-time jailhouse lawyer Aaron Wallace (Nicholas Pinnock), back into his former prison to investigate a coronavirus outbreak among the inmates. Titled “354,” it was the best pandemic-themed episode I saw.

In its recently concluded second season, the moving and nuanced “For Life” was again among the handful of distinctive dramas on network TV, a group that includes CBS’s “Evil,” the CW’s “Black Lightning” and NBC’s Canadian import “Transplant.” An abbreviated 10-episode run was an advantage, but what really helped in Season 2 was Aaron Wallace’s release from prison, the life-changing victory toward which the first season had built. The show could have lost momentum; instead it opened up and gained depth, physically free of the claustrophobic jailhouse confines but still tightly linked to them in psychological and thematic terms.

In shows like “Con Man” and “Powerless,” the versatile actor Alan Tudyk has made a particularly fine art out of frustration — specifically, the agony of the man who feels that the lesser beings around him are not paying him the proper respect. Tudyk is at it again, except that this time he’s playing a towering, pompous alien scornful of the humans he’s been sent to exterminate.

The premise of “Resident Alien,” which was created by the “Family Guy” writer and producer Chris Sheridan, is pretty irresistible. Tudyk’s space traveler crashes in the Colorado mountains, stranding himself on earth and losing his humanity-destroying gizmo under the snowpack. To fit in while he searches for it, he kills and assumes the shape of the first human he finds; now named Harry, he learns human behavior and the English language from marathon viewings of “Law & Order” and takes his place as the town’s decidedly prickly new doctor. Tudyk deftly dispenses both deadpan stares and comic apoplexy, and through the first half of its initial season, the show was consistently clever and astringently funny. Some schmaltz started to creep in at midseason; there’s a lot riding on Wednesday night’s finale.

Set in Los Angeles in the mid-1980s, “Snowfall” takes inspiration from stories of C.I.A. involvement in the birth of the crack cocaine epidemic, but it isn’t interested in arguing about the historical record. Across its four seasons — the fourth has three episodes remaining — it has been a bleak and bracing morality tale, tracing the mutually beneficial but increasingly soul-destroying relationship between the precocious drug dealer Franklin (Damson Idris) and the sleepy-eyed C.I.A. agent Teddy (Carter Hudson), who is idealistic one moment and toxically cynical the next.

Counting John Singleton and the “Justified” writer Dave Andron among its creators and producers (and the great crime novelist Walter Mosley among its writers), “Snowfall” is, when it’s on its game, one of the most engrossing shows on TV. It tends to seesaw, sometimes losing its grip on its intertwining story lines; watching the sitcom veteran Suzy Nakamura get to stretch out this season as a hard-case investigative reporter has been fun, but the plot built around her doesn’t make a lot of sense. The show is on firm ground, though, when it focuses on Franklin and Teddy and on the small band of dreamers and bitter realists they trust, played by a stellar cast including Sergio Peris-Mencheta, Michael Hyatt, Amin Joseph and Isaiah John.