Draped over a bare wooden floor with one leg bent behind and the other extended to the side, the dancer Bettie de Jong slowly rotates, opening an arm and then a knee as if her limbs — long and luxurious — were pages in a book. She spirals up, balanced on one foot while the other leg unfurls high to the side. Her arms lift radiantly but without force. Finally, she descends back to where she started and performs the sequence again. And again.

In the mesmerizing film “9 Variations on a Dance Theme” (1966), the filmmaker Hilary Harris trains his lens on Ms. de Jong, a longtime muse of the choreographer Paul Taylor. Ms. de Jong repeats the variation, but as the film progresses it becomes less a straightforward dance than an intimate, cinematic exploration of the moving body. Shot in hazy black and white, “9 Variations” is a classic; it’s also newly relevant, as dance artists experiment with ways to present their art form on screens.

That’s not the only reason it feels so current: In her isolated state, Ms. de Jong, with her enigmatic, angelic face, cuts a lonely figure. It seems as though she’s dancing in a room by herself — who can’t relate? — yet her partner is Mr. Harris’s camera. It dances with her, gliding over her knitted unitard, closing in on her quivering muscles and following the motion of her graceful fingers while dissecting her body from above and below. But even as the camera has its way, distorting and blurring Ms. de Jong’s statuesque form to render her anonymous, nothing can diminish her ghostly aura.

Recently two Taylor dancers — Michael Trusnovec, who retired from the company but is now the director of worldwide licensing for the Paul Taylor Dance Foundation, as well as a répétiteur of Taylor’s dances — and Kristin Draucker, a current company member, decided to pay homage to Ms. de Jong by creating a new film.

“I remember watching it one morning and just crying on the floor of my living room,” Ms. Draucker said of seeing the original during the early days of the shutdown. “It made me feel connected to dance again. I didn’t feel sad that I wasn’t onstage. I was just really moved by her dancing.” 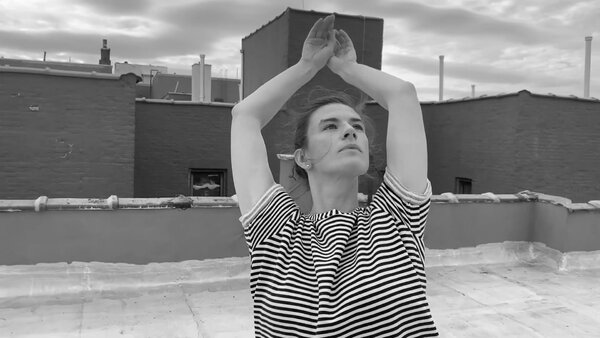 While these dancers largely filmed themselves quickly on smartphones, Ms. de Jong, who is now 87 and a rehearsal director with the Taylor company, said the making of the original unfolded over years. “He started it in ’63,” she said. “It took forever. I hated every moment of it.”

The characteristically blunt Ms. de Jong, speaking in a Zoom conversation that also included Mr. Trusnovec, performed the 45-second variation repeatedly; she danced to silence — music was added later — in sessions that lasted from 10 a.m. until noon. After, she would rehearse with Taylor.

“It practically killed me,” she said. “I tried to get rid of it so badly because for me it was not dancing. No. I had no music, nothing to look at.”

Why did she do it? “It was just money, I guess. And food. My tuna fish and my hamburgers.” She paused. “But it didn’t pay very well.”

Ms. de Jong did appreciate something about it. “He wanted to make a film that the camera made rather than the dancer,” she said. “So he wanted minimal movement. I never prepared myself. I guess I had so much preparation in my wanting to dance that it was just like eating breakfast. Once I lay down on the floor with my arm across, it was very easy to get in the mood.”

Ms. de Jong said that Mr. Harris tried out another dancer, but the combination she created didn’t suit his purpose. For hers, Ms. de Jong got advice from a fellow company member, Dan Wagoner, who recommended that she use the start of her solo in Taylor’s “Scudorama” (1963).

“The beginning is from ‘Scudorama’ but then it goes into something that he liked,” Ms. de Jong said of Mr. Harris. “The leg lift and then going back down to the floor of ‘Scudorama.’ And then I had knitted a warm-up thing, and he said, ‘Can you knit something like that in beige?’”

Concerned about her sewing skills, Ms. de Jong turned to a professional. “I’m not going to go to knit anything that goes on the camera!” she said. “I found this little Hungarian lady who said, ‘Oh, sure, I can knit that,’ and she did.”

Mr. Harris, who died in 1999, didn’t tell Ms. de Jong that his experiment had more to do with the camera than her dancing until he was done filming. Even now, she has a hard time watching it; for one thing, he made her lift a leg she didn’t want to lift. “My right leg,” she said, “goes up higher.”

To get herself through it, she started to relate it to the repetition of a daily barre warm-up. “It’s boring!” she said. “Tendus are boring! So I took it as that: It was an exercise that I had to do. But it was excruciating. And maybe that’s why I can’t watch it. It wasn’t pleasurable. To dance that way without music is so boring and so hard.”

But she still appreciates the affect of his angles, the way his camera is guiding the action. “That I love to watch because it’s very clear that the camera is doing it,” she said. “That is the art of the camera. I could feel him following me.”

For the meditative “Nine New Variations,” Mr. Trusnovec felt that the dancers responded to the camera, but more than that, they were reacting to Ms. de Jong and “to what she was doing,” he said. “They caught that purity, the elegance that she brings to every single time she does it. It’s just so stunning. There’s such simplicity, but it’s so rich.”

Ms. de Jong, who danced for Taylor from 1962 to 1985, said the choreographer’s response to the film wasn’t exactly positive. “Oh, Paul hated it in the beginning,” she said. “And then just recently when I got the Dance Magazine Award, he said, ‘Why don’t you show your movie, Hilary’s movie?’ That was the first time he ever mentioned that movie. He must have liked it anyway.”

Why did she think he hadn’t? “We all have very physical ways of letting you know,” she said. “He was a man of very few words and I knew that he hated it. Probably more jealousy than anything else. That he hadn’t made it.”

She met Taylor at the Martha Graham studios where Ms. de Jong, who was born in Indonesia and later moved to the Netherlands with her family, was a scholarship student. She heard that Taylor was holding an audition; even though it was invitation-only, he allowed her to attend.

After it, she asked Mr. Wagoner if he knew what Taylor had thought of her dancing. “He said, ‘He never thought of taking a tall dancer,’ and I said, ‘Oh, OK. That’s fine, that’s fine.’

But the next day, after taking a morning Graham class, she returned home. She said: “At 1 o’clock the telephone rang and this voice said: ‘Where are you? We’re rehearsing!’ That was it.”

Mr. Trusnovec laughed. “That’s Paul,” he said. “I’ll bet that you got there as quick as you could.”

Ms. de Jong nodded. “I, even without money, took a cab,” she said. “I’m old now, but I feel like I had a very rich life being allowed to dance Paul’s work. I loved all of his dances. I never sliced myself in little pieces. I just was in heaven dancing for that man.”