Wilhelmina Cole Holladay, who used her social connections, organizational acumen and personal collection of hundreds of works by female painters to establish the country’s first museum dedicated to women in the arts, died on Saturday at her home in Washington. She was 98.

Her death was confirmed by the National Museum of Women in the Arts, which she opened in 1987 and had continued to guide as chairwoman until recently, holding weekly meetings with the museum’s director at her home in Georgetown.

Ms. Holladay, known to her friends as Billie, was a skillful Washington networker, someone who understood how to use party invitations and seats on nonprofit boards to press an agenda. But where others might have used those talents to lobby for clients or accumulate power for its own sake, she had a different goal in mind: inserting women into art history, which she believed had too long ignored their contributions.

A patrician with impeccable taste and sense of decorum, she rubbed shoulders with first ladies, lunched with Mellons and Gettys, and drew on those associations and others in Washington’s cultural establishment over the six years it took to open the museum, housed in a former Masonic temple three blocks from the White House.

Under Ms. Holladay’s guidance, the museum grew to include more than 5,500 works by more than 1,000 artists, with an endowment of $66 million and a network of supporting committees in 13 states and 10 countries.

“No player in the art scene has a deeper understanding of power and of money and of how our system works,” wrote Paul Richard, a critic for The Washington Post, when the museum opened. “Despite her white-glove graciousness, hard-working Billie Holladay is a warrior and a winner.” 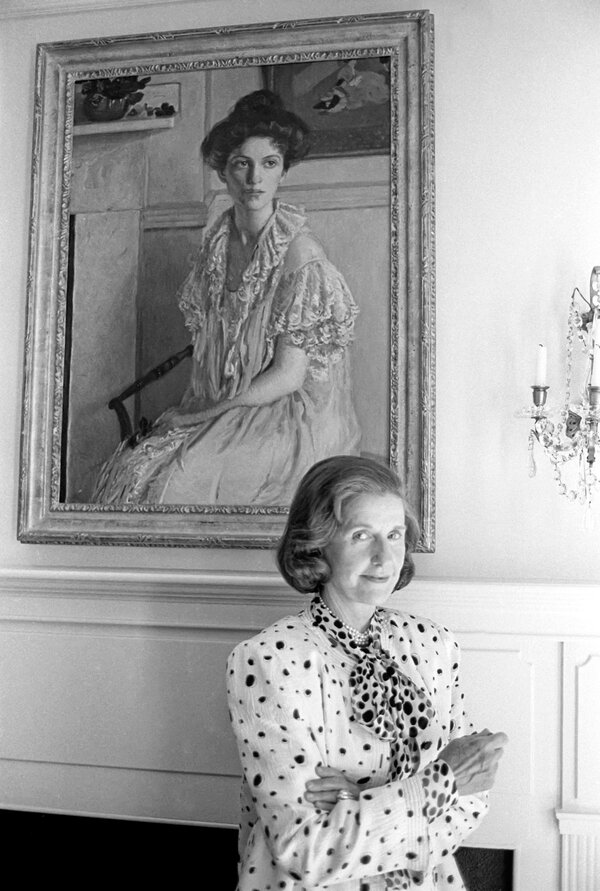 Wilhelmina Cole was born on Oct. 2, 1922, in Elmira, in upstate New York. Her father, Chauncey Cole, was a businessman; her mother, Claire Elisabeth (Strong) Cole, was a homemaker. She was especially close to her maternal grandmother, who lived across the street and owned a print by the French artist Rosa Bonheur.

She moved to Washington soon after graduating from Elmira College in 1944. She got a job as a social secretary for the Chinese Embassy; for a time she worked for Madame Chiang Kai-shek, China’s first lady, who had temporarily relocated to the United States to lobby for international support against the Chinese Communists.

In 1945 she married Wallace F. Holladay, an architect and real estate developer. He died in 2012. Ms. Holladay is survived by her son Wallace Jr., four grandchildren and nine great-grandchildren. Another son, Scott, died in 1979.

Ms. Holladay left the embassy after Wallace Jr. was born and just before the Chinese government fell. The family moved to suburban McLean, Va., and later to Georgetown.

She worked at the National Gallery for a time and later joined several museum and nonprofit boards. She and her husband also began collecting art: Their first work was a painting they bought for $100 at a high school art fair.

On a trip through Europe in the 1970s, the Holladays were struck by a 17th-century still life by the Flemish artist Clara Peeters, which they encountered at the Kunsthistorisches Museum in Vienna. They saw another Peeters work in Madrid, at the Museo del Prado. But back home they could find no mention of her in their many volumes of art history.

“If Peeters was sufficient to hang in two of the world’s great museums, how was it we did not know of her?” Ms. Holladay wrote in her memoir, “A Museum of Their Own” (2008).

She and her husband began to focus their collecting on female artists, eventually amassing 500 works by 150 painters and sculptors. But buying the works was one thing; what bothered Ms. Holladay was a general lack of awareness of female artists.

At dinner parties she would ask if anyone could name five female artists since the Renaissance. She would hear the names Frida Kahlo and Georgia O’Keeffe. Someone might mention Helen Frankenthaler. No one ever got to five.

Ms. Holladay had planned to donate her collection to a museum. But one day over lunch, her friend Nancy Hanks, the first woman to run the National Endowment for the Arts, suggested that she go further. Not everyone had the skills and connections to open her own museum, Ms. Hanks said. But Ms. Holladay did.

She proved adept — and lucky — at fund-raising. Her next-door neighbor was a granddaughter of J. Paul Getty; she gave $1 million. Ms. Holladay’s first gala, in 1983, was headlined by the philanthropist Rachel Lambert Mellon, known as Bunny, and the fashion designer Hubert de Givenchy. While she was working to save money to buy a building, she opened her home and her collection to visitors, with her family and friends acting as docents.

“She was the master of the possible,” said Winton Holladay, her daughter-in-law, who is vice chairwoman of the museum. “She just had this incredible confidence, and her confidence permeated to everyone else.”

For the museum’s location, Ms. Holladay chose the former national headquarters of the Masons, a looming neoclassical building on New York Avenue. The neighborhood was rundown; an adult bookstore sat next door. But she reveled in the irony: A “bastion of a male secret society,” she said of the Masons, would now be used to promote women in the arts.

The museum opened on April 7, 1987, with Barbara Bush, then the second lady, in attendance. Despite the outpouring of support from the Washington establishment, the institution immediately faced criticism from all sides: Feminists claimed it was ghettoizing female artists, while conservatives claimed the museum was politicizing art.

Ms. Holladay was unmoved. When she was fund-raising for the museum, she would point out that just 2 percent of the art acquired by major museums were by women. By the mid-2010s, that number had improved only slightly, to 11 percent. And as the museum’s collection expanded, the criticism died down.

“She had the courage of her convictions and she knew what she wanted to do,” said Susan Fisher Sterling, the museum’s longtime executive director. “She would say to people: ‘You’re absolutely right. It would be wonderful if women artists were treated equally. But they’re not.’”