HUNTINGTON, N.Y. — In the early decades of the 20th-century, things happened in the New York art world when painters like Walt Kuhn, Florine Stettheimer and Wood Gaylor took matters into their own hands. They established clubs and professional organizations and mounted exhibitions — including the 1913 Armory Show, which jump-started American modernism with heady exposure to the European kind.

They met weekly to draw from the model and founded schools, most notably the National Academy of Design. They collaborated on public art, costume balls and performances. They held banquets to honor visiting artists and auctions to raise money for their organizations, frequently buying one another’s work. They found — and collected — new sources of inspiration, including 19th-century American folk art, its simple forms and strong colors inspiring them with homegrown precedents for some of modernism’s signal experiments. 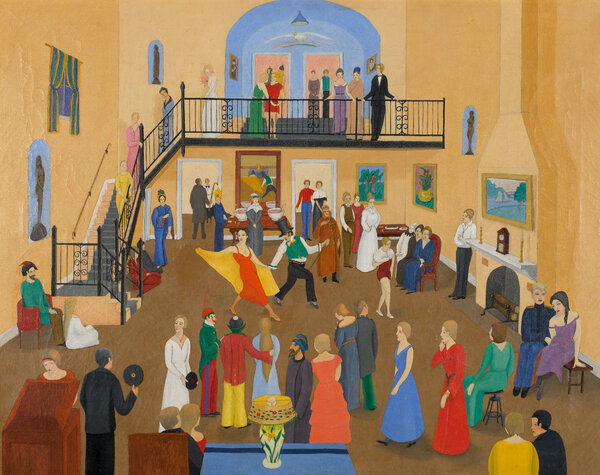 Gaylor, a little-known American painter (1883-1957) who is only now finding his place in art history, participated in all these developments and he recorded many of them in bright, antic faux-naïve oil paintings of carefully outlined figures and settings. Roughly a century after they were made, these ebullient, densely populated scenes — a hybrid of folk art, modern art and documentary — form the beating heart of the artist’s first retrospective at the Heckscher Museum of Art here.

And at Bernard Goldberg Fine Arts in Manhattan, a second Gaylor show rounds out his subject matter with a portrait of the boxer Jack Johnson in a red robe, views of a 14th Street movie theater and cabarets, as well as large pencil drawings with which he plotted his paintings, exactly and at actual size. And don’t miss the noirish 1934 painting “Evidence” here, in which a suspicious wife, accompanied by her mother and a lawyer, catches her philandering husband in the act. Much of this show can also be seen online in the Goldberg booth at the Winter Show, beginning Jan. 22.

A genial man with a talent for organizing things, Gaylor worked well with others and didn’t mind toiling behind the scenes. He was born Samuel Wood Gaylor in Stamford, Conn., and survived a somewhat rocky childhood. His father was a saloonkeeper who tended not to keep his saloons; the family frequently changed cities or addresses. Gaylor commemorated one of the happiest periods of his childhood — when he was 5 and his parents ran a hotel and bar on Stevens Point in Darien, Conn. — in the 1929 painting “Stevens Point” at Goldberg. It shows a big busy barroom whose varied inhabitants (including the young artist, holding a dead duck) all seem fixed on us: a big puddle at the bottom of the picture suggests that someone has just been blown indoors by a storm.

In 1901, when he was 17, Gaylor left home and found work as a designer for New York’s pattern companies — starting with Butterick. Like the composer Charles Ives and the poet Wallace Stevens, he kept his day job most of his life.

But his evenings and weekends were free for art and from the early 1910s to the mid-1930s, he had a finger in many pots. A decisive event occurred in 1912, when, while studying at the National Academy of Design, he serendipitously met Kuhn, the American artist and impresario (1877-1949), who was in the throes of organizing the Armory Show. Gaylor submitted his then-Impressionist-style paintings and two were accepted. He and the other Kuhn acolytes helped their mentor with its installation. Gaylor became a lifelong friend and facilitator for the more volatile Kuhn — who seems to have liked live performance as much as painting — and helped him spearhead the Penguin, an artists’ group that remained active into the early 1920s.

At the Heckscher, Gaylor’s teeming, gregarious portrayals of life in and around the Penguin capture 11 of the artists sketching close by a wood-burning stove (in a lively little 1917 gouache), elaborate panoramas of costume balls and auctions in oil on canvas. We glimpse one ambitious event in “Arts Ball 1918” for which the Penguin members donned hobby horses designed by Kuhn or dressed up as Pierrot. In the excellent 1920 “Posters,” he captured members of the group collaborating on a series of enormous painted posters for a Red Cross bond drive in 1918. The scene is a colorful jumble: the big images of heads dwarf the artists.

In between, a banner of a real penguin hangs over the fireplace. Kuhn, wearing a hat, seems very much in charge. Gaylor and two other men lift one of the posters. Kuhn also keeps his hat on in “Dancing Lesson With Walt Kuhn” (around 1919) while overseeing the footwork of a line of scantily clad women. He appears to be teaching them an insouciant move that Twyla Tharp might envy.

While progressive as artists, the Penguin men lived up to the misogynist standards of their time: There were no female members, although women sometimes exhibited in their shows, and anyone who bought a ticket could attend an arts ball. But the women in the more raucous images, like “Bob’s Party, Number 1” (1918), tend to be models. A wonderful exception is “K.H.M.’s Birthday Party” (1933), which shows a gaily dressed couple dancing (it would seem) the tango at the center of a big buttercream yellow room. The label identifies the dancers as the painters Isabel Bishop and Reginald Marsh.

Gaylor’s flat figures reflect his attention to the styles of Europeans like Gauguin and Puvis de Chavannes, and to folk art, which he collected while summering in Maine during the 1920s. His work also has much in common with the art of Florine Stettheimer, his better-known faux-naïve contemporary. Both distilled their styles from academic approaches, but there are revealing differences. Most obviously there is Gaylor’s love of line and design encouraged by his work with patterns opposed to Stettheimer’s more intuitive way of painting. Stettheimer’s color is jazzy, unconventional and stirred up by her juicy surfaces and sinuous forms. Gaylor’s surfaces are matte and smooth, his figures exude a cartoonish classicism, and his from-the-tube saturated palette of reds, greens and singing blues evoke Renaissance painting. Most important, while Stettheimer was interested in personalities, her images are only loosely tethered to reality. Gaylor was focused on actual events.

Gaylor has had a relatively long obscurity. He was neither part of the Alfred Stieglitz group nor the soignée salon of Stettheimer and her sisters. It may not have helped that in 1934, he and his wife, Adelaide Lawson Gaylor, also an artist, moved with their three children to Glenwood Landing on Long Island, or that in the early 1940s he stopped painting for a decade. There was a posthumous solo exhibition in Manhattan at the Zabriskie Gallery in 1963, when Pop and Minimal art were ascendant, and unsurprisingly, it did not take.

Fast forward through more than a half-century of near invisibility, to 2020, when the Goldberg gallery showed two Gaylors at the Winter Show. By then the Heckscher exhibition was underway. The original show was organized by Andrea P. Rosen, of the Fleming Museum of Art at the University of Vermont in Burlington (where it originated last February with help from the art historian Christine Isabelle Oaklander). The Heckscher Museum’s curator, Karli Wurzelbacher, expanded the exhibition to include 16 artworks by Gaylor’s peers.

Ours seems like a much better time for Wood Gaylor’s quietly dazzling achievement to finally sink in.

Through May 23, Heckscher Museum of Art, 2 Prime Avenue, Huntington, N.Y. ; (631) 380-3230, heckscher.org. Timed tickets are required. The show will travel to the Ogunquit Museum of American Art, Ogunquit, Me.