The virtual event will certainly be unlike we’ve ever seen before.

While the 2020 Emmy Awards aren’t the first award show to go down during the pandemic, they’re certainly the biggest so far.

This year’s event will be hosted by Jimmy Kimmel, who will be at the Staples Center for most of the evening. As for the celebrity presenters, nominees and winners, they’ll almost all be appearing from the comfort of their own homes. The Television Academy hooked all the nominees up with camera kits, sending out 130 cameras to 10 different countries and 120 different cities around the world.

And while we’re used to seeing celebrities dressed to the nines on the red carpet, there isn’t one this year — and the stars involved weren’t given any sort of dress code for the event. That means we could get a good mix of traditional glam mixed with loungewear and pajamas throughout the evening. The Academy is even sending people in hazmat suits around Los Angeles to hand out trophies to some of the winners.

Going into the event, HBO’s “Watchmen” picked up the most nominations of any project — with 26  total. Close behind was “Marvelous Mrs. Maisel” with 20, “Succession” and “Ozark” with 18 apiece and “The Mandalorian” with 15. “Schitt’s Creek” also did really for its final season, picking up 15 nominations as well.

Stay tuned for the night’s most viral moments below.

Jimmy Kimmel hit the stage as host, welcomed by a totally packed and uproarious audience, filled with stars. That, of course, was all a lie. The audience reactions were all made up of file footage from previous ceremonies. It waited until the very end of his monologue for that big reveal.

“Why are we having an award show in the middle of a pandemic? And what the hell am I doing here?” he then asked. “This is the year they decide they have to have a host?”

After saying it’s been a year of “division, injustice, disease, Zoom school, disaster and death,” Kimmel brought up how television was the friend we all needed in quarantine.  The world may be terrible, but TV has never been better.”

“Watchmen is a superhero show, but it also feels very real. It’s a very realistic show, except for the part where anyone in Oklahoma is wearing a mask,” he then cracked. “Isn’t Watchmen what Jerry Falwell Jr. was into?”

Then, the lights in the Staples Center came up, finally showing the empty stands.

“Of course I’m here all alone, of course we don’t have an audience,” he said. “This isn’t a MAGA rally, it’s the Emmys.” As he showed some of the seats had cardboard cutouts in them, nominee Jason Bateman proved he was actually in the house. After being told he had to laugh at all of Kimmel’s jokes if he stayed, he left the building. Jimmy then orchestrated his own standing ovation from the “crowd.”

“The Morning Show” star and nominee Jennifer Aniston was the first presenter of the evening, actually appearing in-person at the Staples Center to join Kimmel on stage.

Before naming the nominees, the two decided “burning all the germs” off the envelope was the way to go — so they covered it in Lysol and lit it on fire, leaving Aniston to put it out with a fire extinguisher. People were impressed. 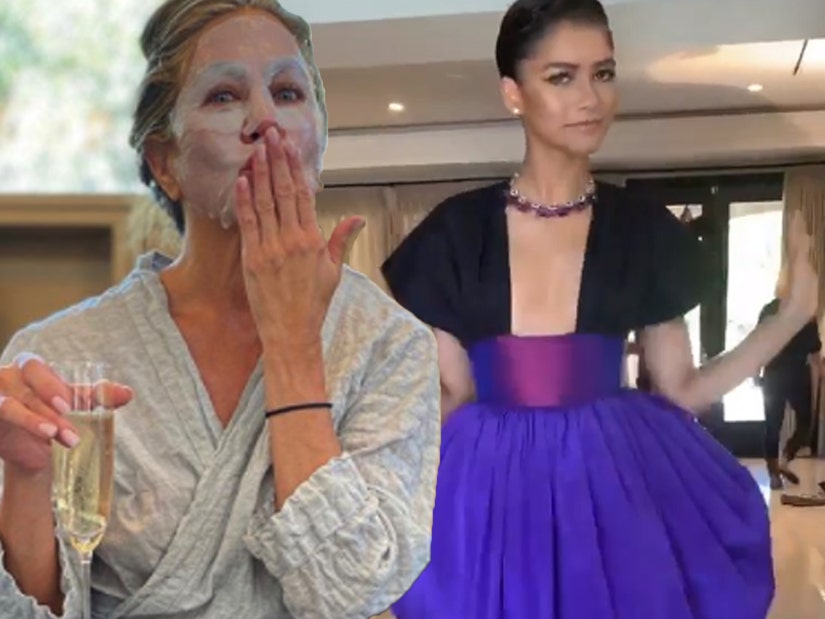 Tags: 2020, awards, Emmy, Most, THE, Vir
Recent Posts
We and our partners use cookies on this site to improve our service, perform analytics, personalize advertising, measure advertising performance, and remember website preferences.Ok