Anthony Albanese will position himself as a leader for the future by promising a Labor government would tap into the energy and ideas of young Australians to accelerate the creation of new businesses and jobs.

The Opposition Leader will use his traditional budget reply speech on Thursday evening to launch “Startup Year”, a policy that would offer 2000 students mentoring by universities and private-sector incubators to get their business ideas off the ground. 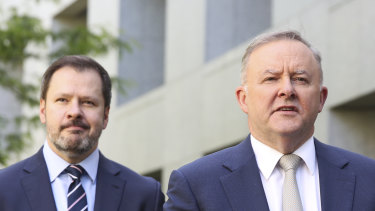 Australia is home to some of the world’s most successful start-ups, with advocates estimating they have the potential to contribute $109 billion, or 4 per cent of gross domestic product, to the economy.

Among them is high-flying Sydney-based design software start-up Canva, which last month cemented its status as Australia’s most-hyped private company after raising a fresh round of funding that valued its operations at $US15 billion ($19 billion).

Mr Albanese said Startup Year would be designed to keep the next generation of innovators, risk­takers and wealth creators in Australia while bolstering Labor’s strategy for sustainable growth and quality future jobs.

“It is Australian start-ups in areas like manufacturing, medicine, IT and clean energy that will build the Australian industries of tomorrow whilst also solving some of our toughest domestic and global challenges,” he said.

The program will look to support the emergence of start-ups with founders from diverse backgrounds as well as regionally based enterprises, and aims to strengthen relationships between industry and the tertiary sector.

Department of Industry data shows new firms create more net new jobs than established ones, with those up to three years old creating 1.44 million jobs over the six years to 2011 compared with a net loss of 400,000 jobs from established companies over the same period.

Australia has fallen four places to 23 since 2013 on the Global Innovation Index and dropped from ninth in 2015 to 14th in 2019 for digital readiness in IMD World Competitiveness Centre rankings.

Former prime minister Malcolm Turnbull launched a comprehensive set of 24 policy reforms in his 2016 National Innovation and Science Agenda, which fell flat among many of his colleagues and was accused of frightening voters during his disastrous 2016 campaign.

But Opposition industry and innovation spokesman Ed Husic said the goal of Startup Year was to increase the number and scale of high-growth firms that were creating economic growth, innovation and good quality jobs.

“This program will bring together the most innovative young entrepreneurs, universities and other industry leaders to work in concert to increase the success of Australia’s start-up sector,” Mr Husic said. “Not only do start-ups play a key role in creating new industries and bringing new products to market; they also play a critical role in job creation.”

Australia’s science and business sectors welcomed the federal government’s “patent box” announcement in Tuesday’s budget, which offers targeted tax concessions aimed at spurring much-needed investment in the medtech and biotech industries. Under the $206.4 million scheme, income earned from new patents developed in Australia will be taxed at a concessional 17 per cent rate, nearly half the rate paid by large companies.