Nationals MP Barnaby Joyce has hit back at the government’s plan to change the superannuation laws and hand the Treasurer the power to intervene on funds’ spending, saying it threatens to leave future governments with the ability to block investments on moral grounds.

Mr Joyce criticised the proposed Your Future, Your Super Bill in the House of Representatives on Wednesday, saying while Parliament can be “tribal” he understood rival Labor’s concerns about the additional power the legislation would hand future Treasurers to intervene in the spending decisions of the $3.1 trillion superannuation sector. 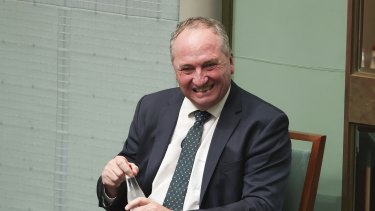 The government has already faced criticism from the crossbench over the inclusion of these powers, including MPs Bob Katter and former Liberal Craig Kelly, while Labor has been pushing for amendments.

“Obviously we believe that the intent of our side is always right but this issue about [these powers] is not going without question,” Mr Joyce said, adding he would meet with the government to discuss his concerns.

“The discretion by a third party to determine where … [funds] should be invested and where they shouldn’t, we have a real problem with,” he said.

He pointed out the Nationals are “pro-coal” and this can be “politically incorrect” and even “despised” to the point where future governments might wish to block super investments in the sector.

“This is not how it works. I can understand implicitly if someone is invested in something that is losing money hand over fist then of course you have a duty of stewardship as you do in corporate law to try and get the best returns for your shareholders,” he said.

“But you don’t have a duty of moralising where you think they should and shouldn’t invest. If they’ve found an investment and it’s legal then that should be where it finishes.”

He said if an investment was legal, prudent and makes money then it’s a “good investment”. But he declined to say how he and other Nationals MPs would vote on the legislation, noting he’d been looking through the bill and “how to decipher it”.

“We are looking for better comfort brought forward by the minister as to why this [power] cannot be exploited. We’re very aware of the fact that when the time comes we’re not in government and someone else is we can hardly argue against something the other side does when you brought in the laws for them to do it,” he said.

“But if you start saying ‘well I don’t like coal, I don’t like gas [and] fracking, I don’t like the live cattle trade’ and all this as inevitably would [happen] because the Greens would put pressure on Labor … then we’re in trouble,” he said.

The legislation also faces a battle over its stapling measures, which attaches workers to their super accounts when they change jobs unless they choose to switch, as some MPs are concerned employees might be stuck to an underperforming fund. The legislation was introduced in last year’s budget in a bid to improve fund performance and reduce the number of unnecessary multiple funds eroding balances through excess fees.

Superannuation Minister Jane Hume has previously said the additional powers provided to the Treasurer would be used when there are “grey areas” that leave the regulator unable to intervene. Labor superannuation spokesman Stephen Jones, who is supported by the super industry, has criticised the powers as an “overreach” and previously wrote to Colition MPs warning them of its potential use by future governments.