MINSK, Belarus — More workers in Belarus joined a widening strike Tuesday as they press for the resignation of authoritarian President Alexander Lukashenko, who has extended his 26-year rule in an election the opposition says was rigged.

Lukashenko has bluntly rejected the demands to step down following a harsh police crackdown on peaceful protesters in the days after the Aug. 9 vote. In a move intended to secure the loyalty of law enforcement agencies amid the swelling demonstrations and strikes, he signed a decree honoring over 300 police officers for their service.

The opposition denounced the awards as a national insult following the suppression of protests with rubber bullets, stun grenades and clubs. Nearly 7,000 people were detained, hundreds were injured and at least two people died.

The Interior Ministry that oversees police insisted the awards weren’t linked to the crackdown that has galvanized public anger and drawn international criticism.

Lukashenko’s actions prompted thousands — including workers at state-controlled factories and plants, actors and broadcasters — to walk off the job.

The prospect of a massive nationwide shutdown was an unprecedented challenge to Lukashenko, who has relied on blue-collar workers as the core of his supporters. During Monday’s visit to a factory in Minsk he was heckled and jeered by workers shouting “Go away!”

“The authorities should understand that they are losing control,” head of an independent miners’ union Yuri Zakharov told The Associated Press on Tuesday. “Only Lukashenko’s resignation and punishment of those in charge of rigging and beatings can calm us down. “The strike will continue and grow until he steps down.”

The labor action that began Monday quickly grew to several major industrial plants, including a huge factory that accounts for a fifth of the world’s potash fertilizer output.

In the city of Soligorsk, home to the giant Belaruskali potash factory, strike organizer Anatoly Bokun said workers at all potash mines have halted work. The factory, which employs 16,000, is Belarus’ major cash earner.

“They are putting pressure on us and threatening us with mass dismissals, but we will not return to work until Lukashenko steps down,” Bokun said as thousands of workers joined a protest rally.

“They have stolen our choice,” said one striking worker, 32-year-old Gleb Sandros. “What else can we do to stop the authorities’ arbitrary and lawless action?”

Belarus’ ambassador to Slovakia, Igor Leshchenya, became the first government official to challenge Lukashenko on Saturday when he posted a video in support of the protests before handing in his resignation.

He was joined Tuesday by Belarus’ ambassador to Spain, Pavel Pustavy. In a statement posted on Facebook, he urged authorities to recount the vote and prosecute those who beat peaceful protesters.

Workers at state-controlled television and the nation’s most prominent theater also have joined protests.

Nearly 1,000 people gathered in front of the Janka Kupala National Theater in Minsk to support members of its troupe who gave notice en masse after its director, Pavel Latushko, was fired for siding with the protesters.

Culture Minister Yuri Bondar visited the theater to try to assuage concerns. The actors demanded he reinstate Latushko, a former diplomat and a former culture minister himself, but Bondar refused. He left after being heckled and jeered by the performers, who threw a stack of resignation letters at his feet.

“It’s important to speak out, important not to stay silent,” prominent actor Kristina Drobysh told supporters outside the theater. “We’ve overcome our fear, our society has overcome its fear. Belarusians have changed — which means Belarus will change, too.”

Several hundred demonstrators also gathered in front of a detention center in Minsk where the husband of Lukashenko’s top challenger in the vote, Sviatlana Tsikhanouskaya, was being held to cheer him on his 42nd birthday. Tsikhanouskaya joined the race after the jailing of her husband, Sergei, a popular opposition blogger who had wanted to run for president.

Last week, Tsikhanouskaya left the country for Lithuania in a move her campaign said was made under duress. On Monday she declared her readiness to act as a national leader to facilitate a new election. Her top associate, Maria Kolesnikova, said that members of an opposition “coordination council” being formed to negotiate the transition of power would meet Tuesday.

“Our goal is to unite society, all of Belarus, so that the Belarusian society has a legitimate institution to negotiate and make demands,” Kolesnikova told the AP. 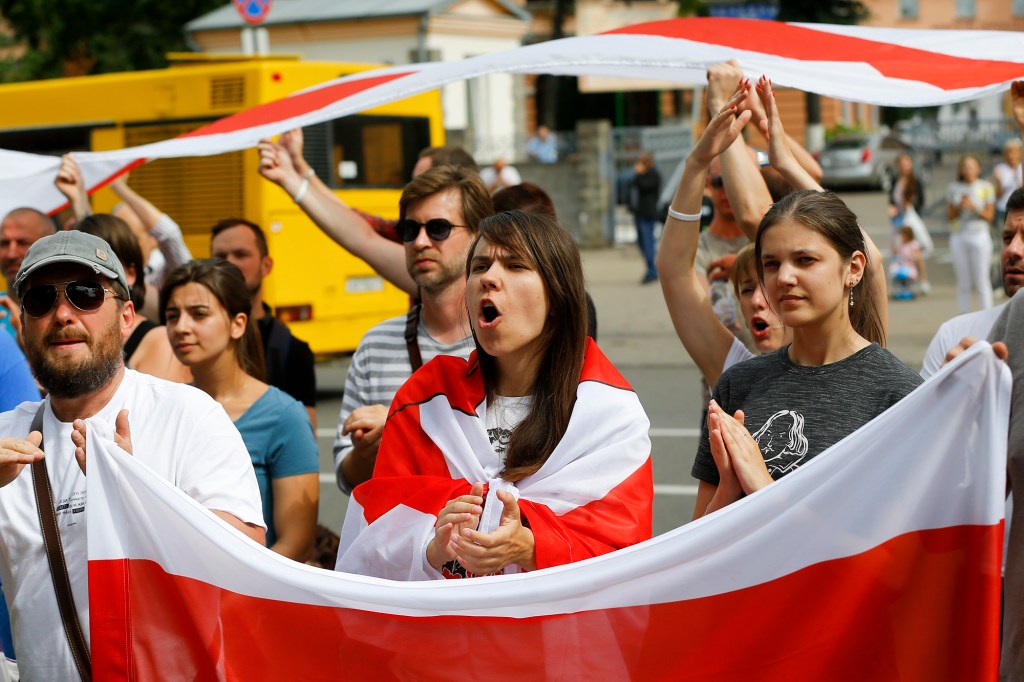 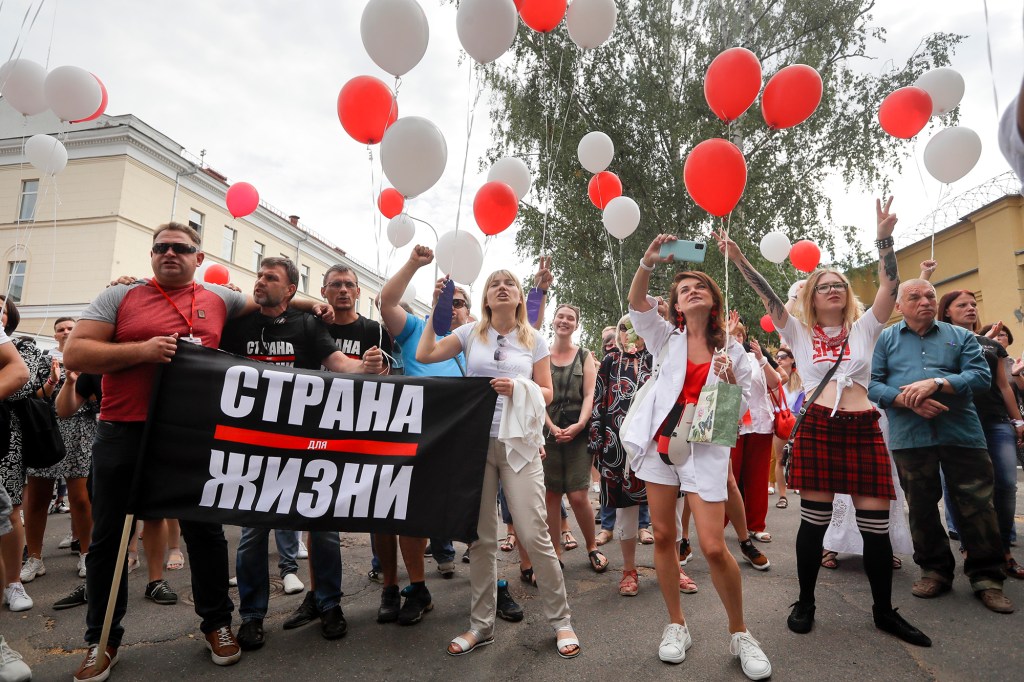 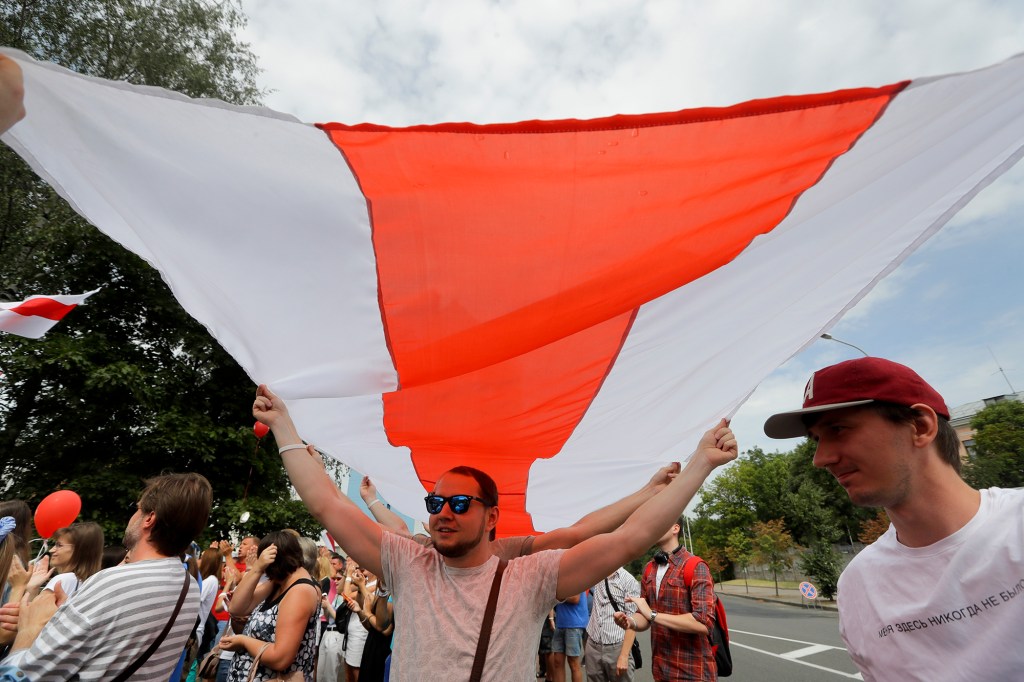 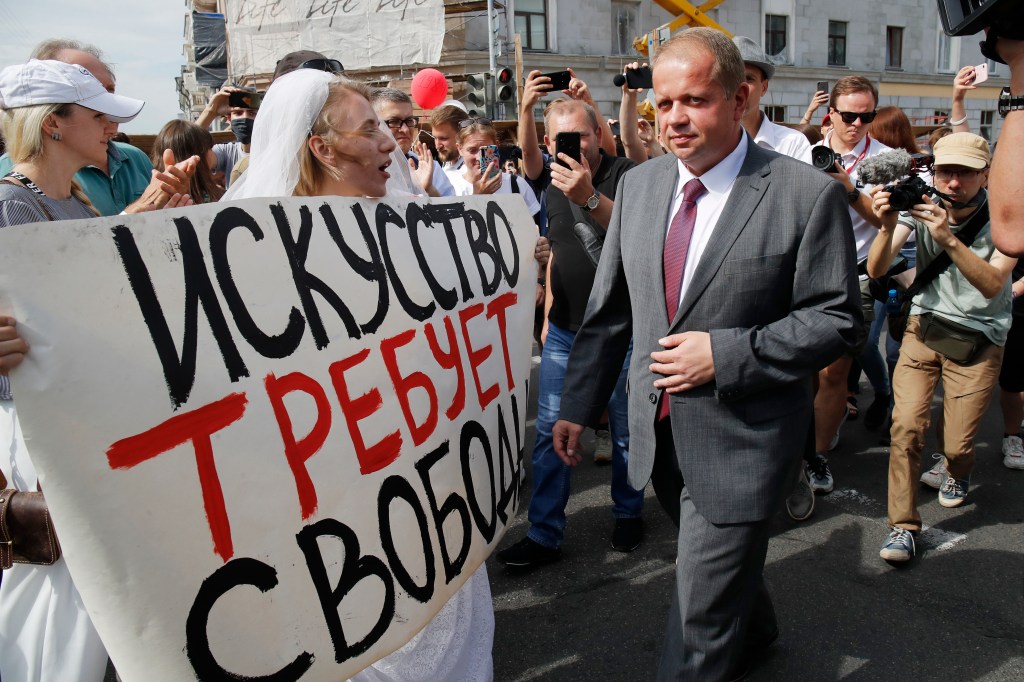 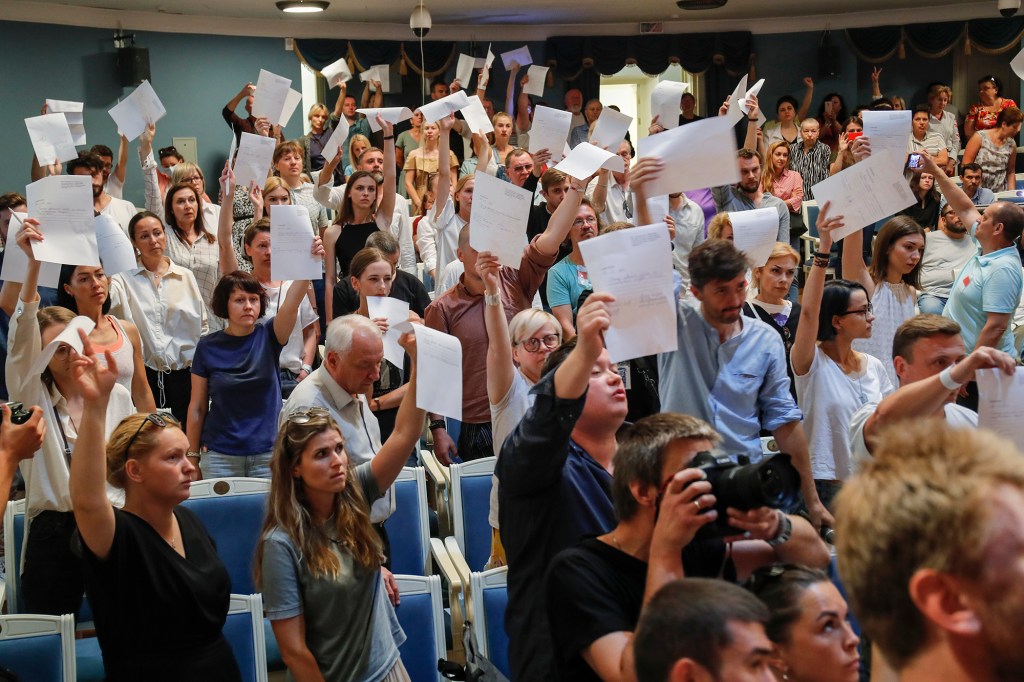