Chinese-Australian billionaire and prolific political donor Chau Chak Wing told the Federal Bureau of Investigation in 2016 that $200,000 his company wired to an allegedly corrupt United Nations chief was a donation to “alleviate poverty”, Parliament has heard.

FBI documents tabled in Federal Parliament on Tuesday afternoon reveal how the US domestic intelligence service used emails and financial records to trace $200,000 sent by Mr Chau’s company, Kingold Investments, to a personal bank account set up by John Ashe, the now deceased former president of the UN General Assembly. 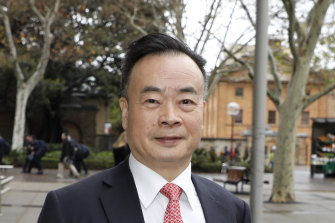 Chau Chak Wing outside the Federal Court in 2018.Credit:AAP

The tabling of the FBI case file by Liberal MP Tim Wilson with the backing of Labor MP Julian Hill is the second time Australian politicians have used parliamentary privilege to accuse Mr Chau of involvement in a bribery scandal and the Chinese Communist Party’s overseas influence activities.

Allegations that “security agencies regard Mr Chau as a part of the Chinese Communist Party’s overseas influence campaign” were also aired under privilege in Federal Parliament.

The FBI documents tabled in Parliament state Mr Ashe gave a speech in his official capacity as a UN official at a conference attended by former and serving Chinese and international political leaders in return for the $200,000 payment. 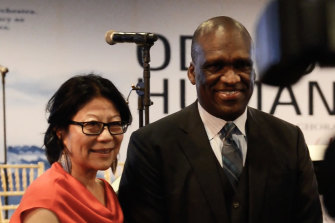 She ultimately pleaded guilty to a number of offences, but never agreed that the funds paid by Mr Chau’s company were a bribe.

The FBI case file also reveals that the agency gathered information about a 2011 conference hosted by Mr Chau involving senior Australian and Chinese leaders. According to the FBI documents, that conference was also hosted by the Chinese Communist Party’s foreign affairs organisation, the Chinese People’s Association for Friendship with Foreign Countries.

Controversy has long surrounded Mr Chau’s connection to the United Nations bribery scandal given his role as a major political donor to both major parties in Australia.

Mr Chau has denied any wrongdoing and successfully sued journalists who reported on the FBI probe into the payment from his firm Kingold to Mr Ashe’s personal bank account. 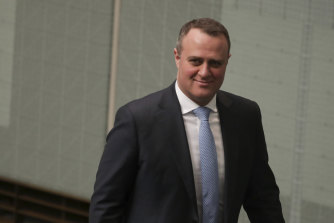 Mr Chau was never charged by the FBI.

In 2018 Liberal MP Andrew Hastie named Mr Chau in Parliament as the source of the alleged bribe funds and claimed Australia’s defamation laws were being used to suppress information in the national interest.

Mr Hastie said at the time that Mr Chau had given more than $4 million since 2004 to the Liberal and Labor parties and also donated $45 million to universities in Australia.

Mr Wilson said in Parliament on Tuesday that: “Mr Chau’s role in providing funds [to Mr Ashe] has been obscured by defamation cases”. He also repeated the allegations aired by Mr Hastie that security agencies regarded Mr Chau to be part of Beijing’s efforts to influence overseas governments.

“It reveals the FBI regarded this payment as a quid quo pro in an arrangement to get Mr Ashe to speak at Mr Chau’s 2013 conference.”

“It reveals that in February 2016, FBI agents questioned Mr Chau about these payments. It reveals he told the FBI it was in his mind merely a donation to alleviate poverty. Meanwhile, the US authorities charged Mr Chau’s contact Sheri Yan with bribery over the same payment.”

Mr Wilson said his intention in tabling the documents was “to let the light in”, adding “the best antidote against those who seek to influence our political system or our universities … is sunshine”.

On Tuesday, Mr Chau had another legal victory in a Federal Court defamation case he lodged in connection to a 2017 Four Corners story detailing the payment to Mr Ashe and the FBI case.

The ABC and Nine were ordered to pay Mr Chau $590,000 in damages after a Federal Court judge found the media outlets defamed him by suggesting he bribed John Ashe and that he bribed Australian politicians in the form of political donations.

However, Federal Court judge Steven Rares found the program did not convey two of the more serious allegations that Mr Chau had claimed.

The media outlets said they were “deeply disappointed” by the judgment and urged state and territory legislators to take urgent steps to pass reforms to defamation laws that have been agreed upon by a national working group.

The tabling of the FBI case file in Parliament is significant because it provides fresh information about the law enforcement agency’s investigations into Mr Chau. Mr Chau has never been charged with any criminal offence and there is no suggestion that he has engaged in any criminal conduct.

Both Mr Chau and Yan maintain that the $200,000 payment from Mr Chau’s company to Mr Ashe was not a bribe.

The tabled FBI files include a summary of information gathered by investigators and which states: “Ultimately, CCW [Chau Chak Wing] paid a bank account controlled by UN general assembly president ASHE $200,000, and in return, ASHE travelled to and spoke at an event being hosted at CCW’s ‘Imperial Springs’ property.”

The FBI files detail emails and conversations between Ashe, Yan and Yan’s offsider Heidi Park, in which Ashe said he would attend the 2013 conference but only if he was paid money into an account he had set up to finance his campaign to remain president of the UN General Assembly. The FBI documents refer to Mr Chau using his mandarin name Zhou Zerong.

“ASHE had told YAN and PARK to keep their promise to help his PGA fund, and they asked ZHOU [Chau Chak Wing] to donate money to ASHE. ZHOU [Chau Chak Wing] made a $200,000 payment to ASHE directly into his PGA account in November 2013,” states one of the FBI documents tabled in parliament.

Mr Chau told investigators he had known Yan for five or six years. He also told the FBI that he only got involved in transactions of more than $10 million and therefore “didn’t pay much attention” to the $200,000 payment from Kingold to Ashe beyond telling an associate to “go ahead and do it.” Mr Chau said in the interview he was told the $200,000 was a donation to fight poverty but he never received a donation report or any receipt.

The FBI account of its interview states: “Chau reiterated that the order of events was he spoke with Yan and she mentioned the United Nations wanted to send Ashe to the summit, he referred Yan to [redacted] and shortly after he approved a donation to Ashe in the amount of $200,000 for the alleviation of poverty.”

Yan was arrested by the FBI in October 2015 for a number of alleged bribery offences, including using the Chau company funds to bribe Mr Ashe to attend Mr Chau’s summit. She later pleaded guilty to an unrelated charge of bribing Mr Ashe and was jailed.