A major reset of Australia’s COVID-19 vaccination program will allow people over 50 to get a dose from their doctor or a state-run mass vaccination hub as Prime Minister Scott Morrison calls for a sprint to immunise the bulk of the nation by Christmas.

GPs will continue to be the main focus of the vaccine rollout but state and territory leaders have agreed in principle to bring forward the vaccinations of people aged 50 to 70 with additional help from state hubs using the country’s stock of AstraZeneca vaccines. 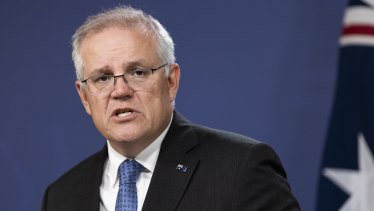 National cabinet has agreed in principle to bring forward vaccinations for those aged over 50.Credit:Brook Mitchell

“There are strong, strong arguments for the bringing forward of over-50s with the AstraZeneca vaccine,” Prime Minister Scott Morrison said before a national cabinet meeting on Monday afternoon.

The first of the new biweekly national cabinet meetings set the stage for a “big reset” of the country’s vaccine rollout, which has fallen far behind early targets and led to tension between some state governments and the Commonwealth.

The initial plan relied on 50 million locally produced doses of the AstraZeneca vaccine to be the workhorse of the country’s rollout. But a change in expert medical advice earlier this month, recommending Pfizer as the preferred vaccine for people under the age of 50, meant that plan had to be scrapped.

AstraZeneca is still recommended for those aged over 50 by the Australian Technical Advisory Group on Immunisation (ATAGI) and CSL is producing about 800,000 doses a week at its Melbourne facility.

Pfizer has been delivering roughly 130,000 doses a week and while the company has committed to ramping up shipments, the bulk of those 40 million doses will not arrive until the fourth quarter of the year.

Before the meeting, Mr Morrison said he hoped to get the bulk of under-50s immunised in the last three months of the year with the help of mass vaccination hubs.

“There’s a lot of work to be done given that would be effectively, if we wished, a 12-week sprint,” he said. “To be able to do that safely and effectively … there’d need to be plenty of planning to achieve that.”

The Prime Minister first signalled his interest in bringing forward immunisations for the over-50s on Sunday.

Adults over the age of 50 are in phase 2a of the rollout, which was originally set to start in the middle of the year. No new vaccination start date for this group has been set.

National cabinet agreed vaccinating the vulnerable people in phases 1a and 1b remained the priority and the Commonwealth would continue to focus on vaccinating aged care residents.

Queensland Premier Annastacia Palaszczuk said the country’s leaders were keen to work together.

“I think it’s a big reset on the vaccine rollout,” she said following the meeting. “Everyone went into that room very positive, everyone wants the same outcome.”

Prior to the national cabinet meeting, both the NSW and Victorian leaders said the vaccine rollout must be sped up and they were willing to open more mass vaccination centres as long as the Commonwealth provided the supplies.

NSW Premier Gladys Berejiklian said the country needed to be “far less rigid” with the rollout.

“We really need to crank on with it,“ she said on Monday morning.

Acting Victorian Premier James Merlino said the state was ready and able to do more in terms of mass vaccination, subject to supply.

Potential changes to quarantine arrangements were not discussed on Monday, despite the Prime Minister previously suggested he would like to see home quarantine for vaccinated Australians who travel overseas on essential business introduced in the second half of the year.