The threatened expulsion of small town Bury from the English Football League – which could happen if the owner, Steve Dale, does not conclude a sale of the club by 5pm on Tuesday – has been a touch more emotional for me than many of the football traumas I have investigated as a journalist over the past 20 years. I grew up in north Manchester, five miles down the road, and went to school in Bury. Twice a day I used to pass the club’s Gigg Lane ground and wonder at it from the top of the 35 bus: a proper football home, bedded in with all its history behind a pleasing line of trees.

In these crisis-stricken months for Bury, a club founded in 1885, many people have rightly pointed with bewilderment to English football’s violent inequalities; to Manchester City and United 10 miles away, owned by overseas billionaires, making multimillionaires of their players and managers. Supporters have despaired at the gaping holes in football’s governance, its painfully limited “fit and proper persons test” for owners, so long campaigned for but that still fails to protect beloved clubs from needless ruination.

But the details of Bury’s crumbling expose an alarming, knacker’s-yard wreckage that is more broadly worrying for the economies of Britain’s old industrial places at this time of imminent national shock. Football, the national sport, has always reflected the country and its times. When Bury, Bolton, Blackburn, Preston and other north-west and Midlands towns formed the late-Victorian professional clubs, they were powerhouses of mills and manufacturing. The former public schoolboys who founded the Football Association in London in 1863 remained amateurs and opposed professionalism for years – partly because they did not need the money to compensate them for time off to train and play.

Today, the ruins of Bury FC expose the wider vulnerability of its surrounding town and many places like it around the country on the brink of Brexit: a disruption engineered by politicians who never took the bus to school, apparently incubating extreme ideologies for a country from which they were always kept detached.

Bury’s financial instability was evident for five years under the previous owner, Stewart Day, a Blackburn-based property developer specialising in accommodation blocks for students. In 2014 his company borrowed money secured on Gigg Lane at 10% interest a month, which compounded into 138% annual interest. That, sadly, did not clang enough alarm bells and Day continued building his flats, and loading borrowings on to Bury, until it all collapsed. 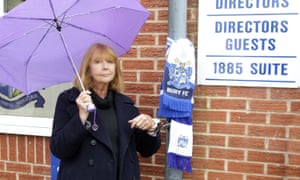 When he announced in December that he had sold the club to Dale, for £1, Day said he wanted to spend more time with his family, while Dale spoke of it as a philanthropic venture. Day’s financial difficulties were laid bare within weeks, as his companies fell into insolvency and administration.

Some people involved in new or expanding universities in northern former mill towns have described their growth as economic regeneration, but it has always seemed shaky to base a recovery on government-backed loans taken out by young people facing uncertain futures. Day’s property ventures were not even supported by banks; he had borrowed heavily from Lendy, a model based on attracting money from thousands of individual investors, which has itself collapsed and is now subject to a Financial Conduct Authority investigation. Day also pre-sold individual flats, promising guaranteed returns from students’ rent payments, and many investors are now distraught at seeing life savings lost.

At Bury itself, loans now up to £3.7m, secured on Gigg Lane, were taken from an outfit called Capital Bridging Finance Solutions, based in Crosby, with 40% commissions paid to still-unnamed third parties as introduction fees. The publicly filed documents state that Capital in turn mortgaged Bury’s ground to a company registered in Malta, whose own lenders for the deal were eight companies domiciled in the offshore tax haven of the British Virgin Islands. Perhaps you have to know and have been to Gigg Lane, a football haven amid terraced streets just off Manchester Road, to feel in your guts the ludicrous nature of such house-of-cards economics.

A further look at Dale’s business record revealed a trader in insolvent companies that had mostly been dissolved or liquidated. Any philanthropic intentions were overtaken by his voluble complaining at the financial hole vacated by Day. On the way to Bury’s own insolvency Dale laid off hardworking staff and failed to pay £4m of creditors including £1.1m to HMRC, as well as players who are still owed substantial back wages.

Bury’s council leader, David Jones, told the Guardian last week that losing the club would be a “nail in the coffin” for the town. Since David Cameron and Nick Clegg formed their coalition government in 2010, the council has suffered cuts of £85m, 61% of its annual budget, he said. Boris Johnson is now presenting a no-deal Brexit as easy to cope with, when the government’s own assessment is that the north-west’s already patchy and unequal economy will suffer a -12% hit.

That is the broader context of the Bury collapse and its defining image: the former director Joy Hart, chaining herself to a drainpipe outside the club’s closed offices, pleading for salvation.

• David Conn is a Guardian writer