The development of a domestic security force in East Timor was a matter of "fundamental importance" to Australia's strategic interests, newly declassified documents released for the first time on Friday reveal.

Cabinet papers from 2000 outlined post-independence security scenarios in documents marked AUSTEO – "for Australian Eyes Only" – which were considered by the Howard government's national security committee in August of that year. 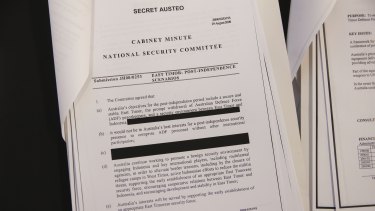 Cabinet papers from 2000 have been released by the National Archives of Australia.Credit:Alex Ellinghausen

The passage of East Timor to independent statehood had formally begun a year earlier when the United Nations took over the territory's administration from Indonesia.

Heavily redacted on the grounds it could damage Australia's standing with foreign governments to this year, the submission from Alexander Downer, then Foreign Minister, revealed the government wanted a "substantial strategic relationship" with its northern neighbour.

"An important part of this will be a defence relationship and the future shape of the East Timorese defence force is therefore a key issue for us," he told his cabinet colleagues in documents today released by the National Archives.

"We also need to remain open-minded about East Timor's future security and not assume that the UN will hand over a stable and secure country to self-government."

Cabinet, the papers show, wanted a "modest and affordable" domestic security force which was "disciplined", operated within the rule of law and was subordinate to civil power. It would have between 1000-1500 personnel and lightly armed.

Later that year, John Moore, the Defence Minister, recommended – and cabinet agreed – that 300 M16 rifles with ammunition be supplied to enable the East Timor Defence Force to begin basic training.

Australia's preferred option was a police-based security model but the papers acknowledged this "may not command East Timorese support".

It stipulated that it must promote "constructive relations with Indonesia".

Cabinet endorsed Mr Downer's view that Australia wanted a secure and stable East Timor, but not one requiring an ADF presence. Should one prove necessary, it should only happen with other international participation.

The contentious Timor Gap negotiations, for joint petroleum exploration of the Timor Sea by the two countries, are among a number of cabinet papers from 2000 concerning foreign affairs that remain closed on the grounds they contain information which could affect relations with the current government of a foreign country.

The issue would erupt in scandal years later, when the Australian Secret Intelligence Service clandestinely planted covert listening devices in a room adjacent to the Prime Minister's Office at Dili, to obtain information in order to ensure Australia held the upper hand in negotiations over the rich oil and gas fields.

A legal case involving an intelligence officer who allegedly revealed details of the bugging is expected to continue in the ACT Supreme Court this year.

In June 2000, Chief of the Defence Force, Admiral Chris Barrie, briefed cabinet's national security committee that serious armed attacks had occurred on a handful of occasions against the ADF personnel serving in operations under the United Nations.

During an attack on June 21 several ADF personnel "had been in grave danger of being killed", notes of the briefing show, and they "appeared to be the work of a small group of pro-integrationist insurgents operating without support from any Indonesian government entity".

The committee agreed to provide more support, including a plan to allow ADF helicopters which were assigned to security to the Sydney Olympic Games to be used if there was no serious detriment to Games security.