That is made clear by the sobering State of the Climate report from the Bureau of Meteorology and CSIRO, released every two years.

It draws on the latest climate data and projections to provide scientifically rigorous analysis of climate change in Australia.

While COVID-19 lockdowns and economic downturns helped reduce global emissions in 2020, this has not been enough to make a discernible impact on carbon dioxide levels in the atmosphere, it finds.

“[It's like] you have been eating junk food for 10 years and you jump on the scales for one day … this is about a very long change,” said Dr Jaci Brown, director of the climate science centre at CSIRO Oceans and Atmosphere. “The big challenge for our children and grandchildren is how to flatten this curve.”

Measurements taken at the Cape Grim air pollution station in Tasmania show carbon dioxide levels in the atmosphere have been increasing since pre-industrial times, driven by fossil fuel emissions. Around 85 per cent of global CO2 emissions in the decade from 2009 to 2018 were from fossil fuel sources. 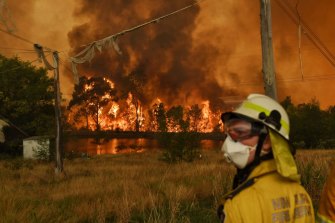 Climate change is predicted to cause more bushfires.Credit:Nick Moir

Despite years of protracted drought in Australia, a La Nina weather event under way in the Pacific will mean above average rain across most of Australia this summer. Dr Karl Braganza, the BOM’s manager of climate environment prediction, said all of the country should be alert for flooding, except the south-west of Western Australia.

Despite predicted heavier rainfall, Dr Braganza said the bureau was also preparing for an extended fire season. “Australia is fire prone, and southern Australia is fire prone in any given summer, [but] sometimes rainfall shifts the way those fires occur. We tend to have more grass fires than forest fires.”

Global sea levels have risen 25 centimetres since 1880, and the world's oceans are increasingly acidic, the report finds. The rate of sea level rise is increasing, and is at 3.5 centimetres per decade.

In south-east Australia, there has been a significant drop in rainfall during autumn and winter since the 1990s, meaning a 60 per cent reduction in stream flow. But in northern Australia, monsoonal rainfall is more extreme during the wet season.

Professor Andy Pitman, director of the ARC Centre of Excellence for Climate Extremes at UNSW, said the findings were consistent with 30 years of scientific predictions, and concerns of the scientific community about global warming had only increased with time.

Professor Pitman said it was no longer possible to limit global warming to 1.5 degrees, but it may be possible to contain it to two degrees, the absolute upper limit permitted under the Paris climate agreement.

Professor Pitman said reaching net zero by 2050 would not be enough to stop global warming reaching two degrees, and even getting to net zero would be "hugely challenging".

Tags: Already, Change, Climate, Here, is
Recent Posts
We and our partners use cookies on this site to improve our service, perform analytics, personalize advertising, measure advertising performance, and remember website preferences.Ok