“Are you ready for the pop?”

Sickening video has emerged from a Colorado police station where officers laughed about breaking the arm of a 73-year-old dementia patient.

Karen Garner was violently arrested on June 26 of last year after wandering out of a Walmart with $13 worth of items she forgot to pay for.

As body cam footage shows, she was happily picking wildflowers by the side of the road when officers caught up with her. Within seconds they have her arm wrenched behind her back, thrown to the ground and in cuffs. 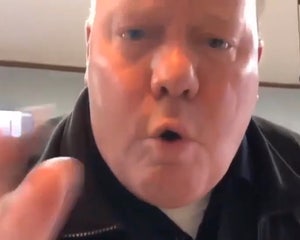 As the tiny, terrified and bloodied septuagenarian begs to be allowed to go home, they laugh at her, hogtie her and throw her in the back of the police car.

The disturbing arrest made national headlines after the family filed a civil lawsuit earlier this month; but on Monday their attorneys released footage arguably even more disturbing, showing the arresting officers Austin Hopp and Daria Jalali laughing, mocking and even fist-bumping about the arrest, as the severely injured grandmother sat with her broken arm handcuffed behind her, alone in a cell just feet away, for six hours without medical attention.

The family hired a sound engineer to enhance the audio on the police station camera footage; it shows the two officers boasting and congratulating each other on how they managed to restrain the elderly lady between them.

At one point Hopp can be heard excitedly telling another officer how he got to use his hobble for the first time, a police rope restraint used for tying up prisoners’ legs.

“It was the first time I got to use it, I was very proud, I was like [gasps!] I was super excited,” he gushed.

“We fought a little bit,” he boasted to a colleague. “I was like ‘Alright let’s wrestle girl! Let’s wreck it!”

But the most unsettling part of the footage comes when three of the officers crowd around a screen to watch their body cam footage, as they laugh about the exact moment they snapped Garner’s shoulder out of its socket.

“Ready for the pop?” Hopp boasts. “Here comes the pop.”

Meanwhile a camera inside Garner’s holding room shows her sitting there, still untreated, while the laughter and sounds of her violent arrest echo around her cell.

“This is utterly disgusting,” Garner’s attorney, Sarah Schielke said. “These videos cannot be unseen or unheard. I am sorry to have to share them with the public. This will be traumatic and deeply upsetting for everyone to see.”

“But as it often goes with bad police departments, it seems this is the only way to make them change. They have to be exposed. If I didn’t release this, the Loveland Police’s toxic culture of arrogance and entitlement, along with their abuse of the vulnerable and powerless, would carry on, business as usual.”

Schielke claims that when they first complained to Loveland PD, they said it was the “first they heard of the incident”; yet at several points the police mention on camera the incident was being reported to Blue Team, a computer-based reporting system that covers use of force in arrests — and is reviewed at each level of supervision.

“Loveland knew. They’ve known all along,” Schielke continued. “They failed Karen Garner. They failed the community. And they did it all on camera. Do you realize how horrifying that is? That means they were used to getting away with it. That the comfortable norm in Loveland is one of zero accountability.”

“That this is not just some ‘isolated incident.’ It is not just one single ‘problem.’ It is widespread, sociopathic criminality. And to attempt to shift the burden to Karen, or a bystander, or her family, or counsel, to report this? Shame on you, Loveland. You took an oath to protect and serve. This is a disgrace.”

Schielke said Garner has still not received an apology from the city.

Garner’s “crime” was leaving Walmart without paying for a candy bar, a can of Pepsi and a t-shirt totaling $13.38; Walmart later confirmed it had recovered the items, so it didn’t suffer the monetary loss.