Unions and employers are both arguing for the federal government to provide direct wage subsidies for workers hit by the coronavirus lockdown, with one retail executive saying other forms of stimulus are pointless until the worst is over.

The calls come as unions and employer groups struck another deal which will see conditions and pay rules changed for more than a million administrative workers, allowing about 10 per cent of the entire Australian workforce to drop their number of hours to keep their jobs and help businesses stay afloat. 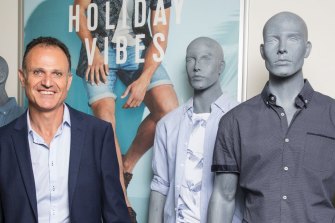 After days of high-stakes negotiations, the national chamber of commerce, ACTU, services union and Australian Industry Group, agreed to the deal on Thursday in the latest example of collaboration between unions and industry groups.

Meanwhile, Gary Novis, the chief executive of Retail Apparel Group (RAG), which operates brands such as Tarocash and YD, called for wage subsidies to be paid to businesses to prevent workers from having to “queue up at Centrelink”.

“What they’re doing in New Zealand, it’s simple and it’s smart,” he told The Age and The Sydney Morning Herald.

Mr Novis, who will shut his company's 500 stores across Australia on Friday afternoon and stand down more than 3000 staff, said other forms of stimulus such as a cash handout, would be pointless because you cannot stimulate the economy during a lockdown.

“That stimulus needs to happen when we’re all back at work to kick start the economy and create some of that demand for goods and services,” he said. 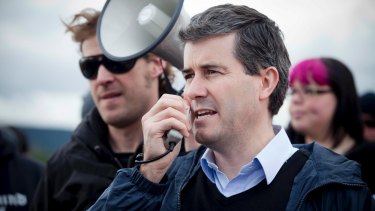 Tim Kennedy is pushing for a jobs guarantee and universal incomeCredit:Arsineh Houspian

United Workers Union national secretary Tim Kennedy said in a position paper that there was an urgent need for the federal government to intervene “and play an active role in guaranteeing and providing social and economic security during this time”.

Mr Kennedy said there should be an “income guarantee” paid at the full-time minimum wage of $740 a week until at least the end of 2020, and he is also pushing for a “jobs guarantee” that would mean no workers could be dismissed or retrenched during the pandemic crisis, with the government guaranteeing the wages of affected workers.

“Every single worker should have a right to return to their jobs at the end of this crisis. Every single job must be guaranteed,” he wrote, including gig workers, casual employees and those in labour hire and the self-employed.

ACTU secretary Sally McManus has warned two million people could be out of work in the coming weeks and wrote to Prime Minister Scott Morrison calling for UK-style wage subsidies of up to $5200 a month for each worker.

General Pants chief executive Sacha Laing also backed wage subsidies for workers, saying it was about making sure his business could re-hire all its staff at the end of the virus.

“We want to maintain continuity of employment with our team, we want them back on board when we reopen our stores,” he said. “But we need them to not only have certainty over the time period we’re dealing with but to also be able to access government assistance without having to completely resign from their roles.”

The government has rejected the push and Industrial Relations Minister Christian Porter said Treasury was strongly opposed to wage subsidies.

“The lessons that Treasury and the governments learned during the GFC is that if you step outside the normal realms of delivery mechanisms, you run into all sorts of problems.”

The new deal struck yesterday for administrative workers allows employees vote on decreasing their hours and pay by up to 25 per cent, and to give employers the power to ask their staff to take twice their annual leave at half their pay rate. It also allows employees to work from home and use their time out of work to train themselves.

Another deal struck on Thursday covered 3000 DHL workers and includes provisions for 10 days paid special leave if they have to go into coronavirus quarantine and lets them work from other offices if their usual base is closed.

Mr Porter said, “I would hope that in the coming weeks we see more such agreements across a wider range of industry sectors”.

Do you know more? Send us a confidential and encrypted message on Journotips or email at [email protected]