The great mince pie taste test! FEMAIL tries out 24 supermarket pastries in search of the best festive treat for 2020 – and a surprising variety came out on top

With a cold chill in the air and Mariah Carey blasting on the radio, the countdown to the festive season has fully begun.

And as a result supermarket shelves are overflowing with festive products from Christmas pudding to turkey crowns.

While you may need to wait until December 25 for the full festive feast, many will be munching on mince pies long before the big day.

From ultra luxury all-butter pies, to the quirky alternatives made with apple or speculoos, how can you tell the tastiest pies from the festive flops?

This year, Femail has tasted 24 of the pastries on offer from Britain’s most popular supermarkets in a taste test – with reporters describing the sweet treats as everything from ‘ taste like baby food’ to ‘the perfect balance of flavour with nothing to improve’.

So can you guess which pack was demolished in a day and which one left a bitter taste in the mouth?

M&S Made Without 4 Mince Pies

Despite my preconceptions about gluten free food, I found these were extremely tasty. The shortbread crust was delicious and very addictive, and the filling was fresh and tangy. – Jessica Rach 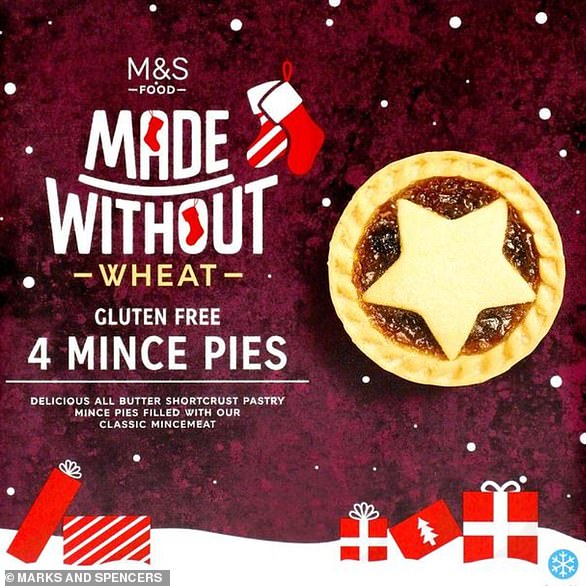 Simply delicious! Whether you enjoy one with your mid-morning cuppa or save it for after dinner, these mince pies from Iceland are truly scrumptious.

Perfect balance of flavour, filling and pastry, there is nothing to improve – Stephanie Bridger- Linning 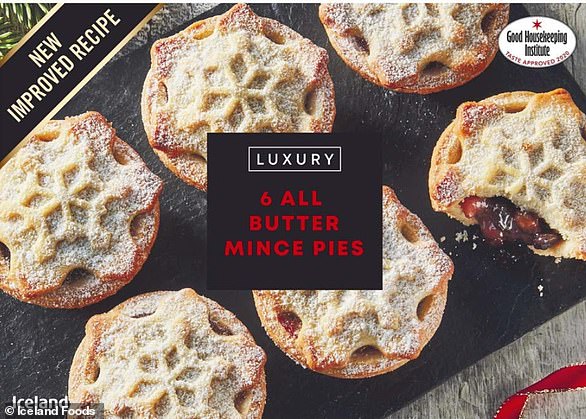 Stephanie thought the luxury all-butter mince pies from Iceland, which she thought would go great with a cuppa

Sometimes tinkering with the classic formula just piles in more unnecessary sweetness, but at first bite I could tell these ginger versions had pulled it off.

The spice cuts through the sweetness and made for a delicious jammy filling.

I loved the fact there were stars on top rather than a full pastry lid because it means they’re a bit less heavy, and they would look pretty on a plate if you’re entertaining.

The pastry is probably not as luxurious as some other brands, but the filling was so delicious that it’s definitely not a downside – Siofra Brennan 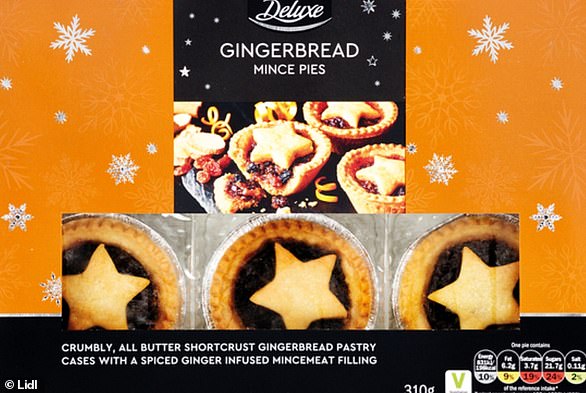 These mince pies were superb. They were delicious, with just the right amount of gin – not too strong, but definitely not too weak.

The fruit mixture was lovely and full of taste and the almonds on top gave it the right amount of crunch.

The pastry was beautiful and once you start you can’t stop eating them (a box was demolished within a day by two people). It was a light treat with a bit of crunch. Simply perfection – Jessica Green 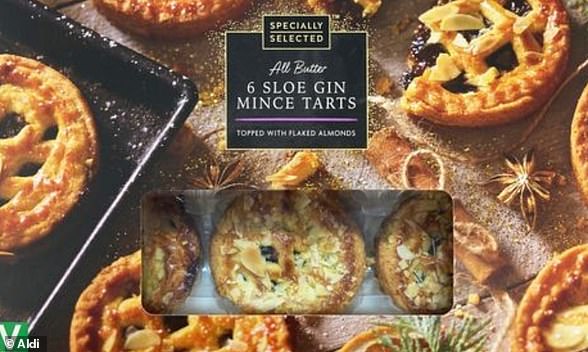 People who like mince pies but are looking for gluten or milk free alternatives with a twist need look no further than these beauties. The maple taste is unreal and compliments the mince pies beautifully.

They should be an all-year-round treat! The only reason they’re not getting a top score is because they are not traditional mince pies. – Claire Toureille 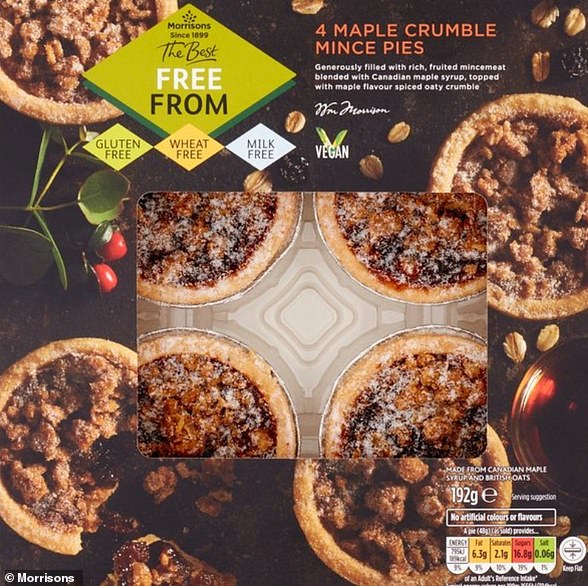 The filling is generous enough to make these an indulgent treat.

The caramel taste is slightly more subtle than I would have liked, but overall, this is a nice twist on the traditional mince pies. –  Claire Toureille 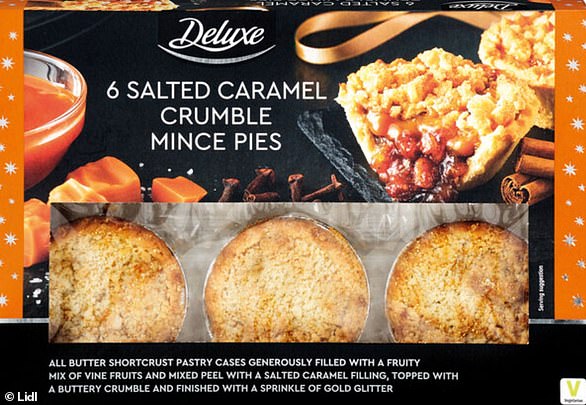 Waitrose No 1 All Butter Mince Pies

Apricot and cherries really came through in this mincemeat, and it’s definitely fruitier than most.

You can really taste that the crust is high quality too, I’d happily pay a bit extra for these. Plus they look really pretty so would look great on a serving plate. – Bridie Pearson-Jones 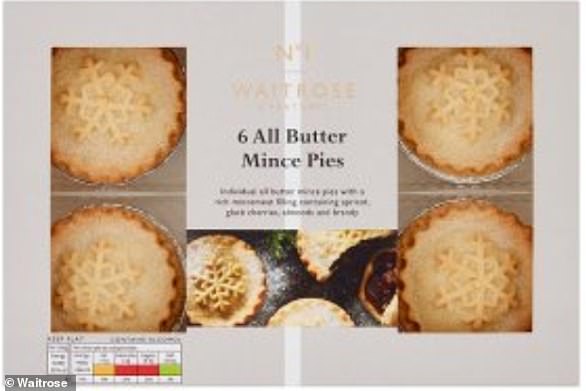 ‘Big and indulgent, these are among the best traditional mince pies I’ve had this year.

‘The deep filling is a delight and the pastry is thick enough to snap under the tooth, but thin enough that it doesn’t turn into a dry paste in the mouth. – Claire Toureille 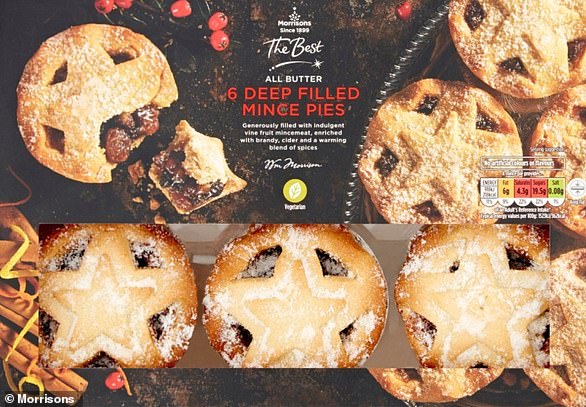 Claire loved these treats, calling the deep filling ‘a delight’ and saying the pastry is thick enough to snap under the tooth, but thin enough that it doesn’t turn into a dry paste in the mouth’

I enjoyed the dusting of icing sugar on these pies, and the subtle hint of booze from the brandy in the mincemeat, which took away some of the sickly sweetness.

The pastry had a pleasant light, crumbly texture, and was a bit thinner than usual shop bought pies, which I prefer. They looked attractive; I’d be tempted to serve them out of their silver trays on a platter for added elegance.  – Hayley Richardson 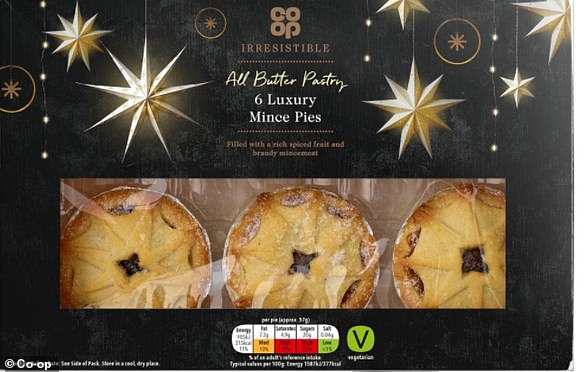 Hayley said  she enjoyed the icing sugar on these pies, and the subtle hint of booze from the brandy in the mincemeat

What a treat! These ‘crumble’ mince pies don’t feel like the most festive of treats, with their chocolatey topping and cherry-flavoured mince meat, however as a Christmas snack they go down an absolute storm.

They miss out on a total of five stars because of the lack of traditional Christmas flavour, but I’d still reach for one from the buffet table. – Harriet Johnston 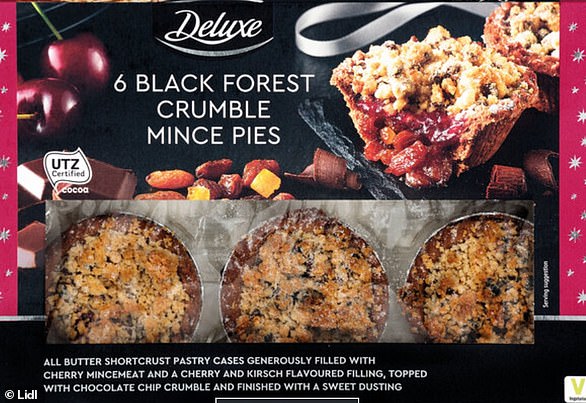 An excellent effort from Lidl, I would not have known these are gluten free. A top treat for the festive season.

The pastry is crumbly and the ratio of mince meat to crust is perfect for a mince pie lover.

The filling is fruity with slight earthy tones. I think if you ate the whole pack the crust would start to clump a little, but all in all a cracking pastry. – Bridie Pearson-Jones 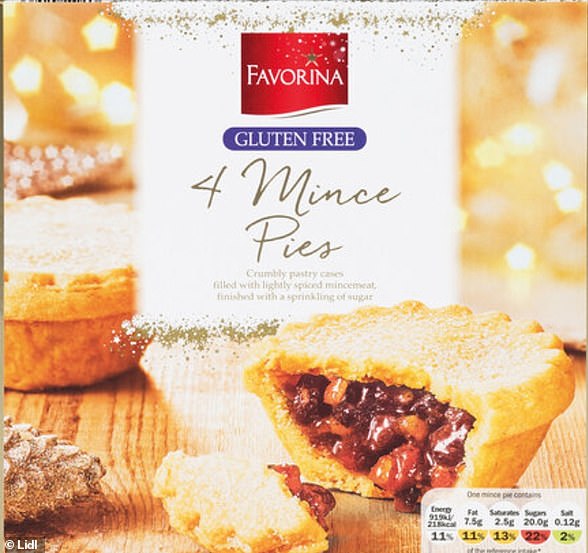 With a pretty star on the top, these mince pies are a vegan treat. The delicous shortcrust is better than the average non-vegan version and the mincemeat is the same used in all M&S pies.

Neither too sweet nor too crumbly (as can often the the case with vegan pastry) this is a perfect treat. – Bridie Pearson-Jones

I’m not actually the biggest fan of mincemeat, so I always love an alternative mince pie and this did the job for me.

The apple was the right side of spicy with gorgeous cinnamon richness with the clementines making it taste like mulled wine in a cup. – Bridie Pearson-Jones 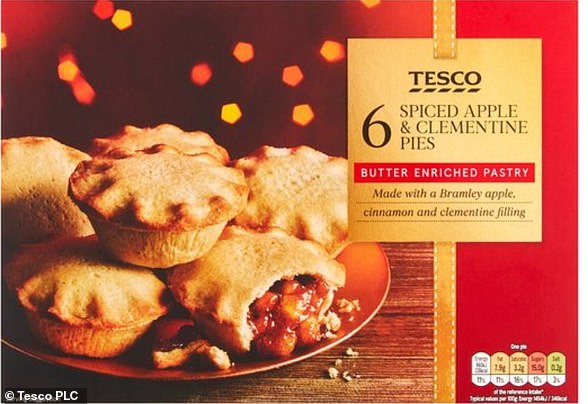 These looked and tasted pretty basic. The pastry was thick and quite stodgy, almost like a stale biscuit.

The filling was ok, but nothing to write home about; essentially currants in a thick syrup that lacked spice. They looked as bland as they tasted, with a light crystal sugar dusting that did little for their visual appeal.

All in all, a disappointing pie – definitely worth paying a bit more for the luxury version! – Hayley Richardson 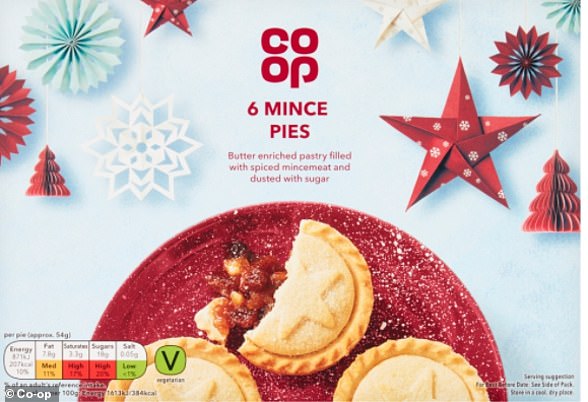 The orange taste is not defined enough to make it noticeable, and the pastry was a crumbling mess, which disintegrated in my fingers after just one bite.

The filling to pastry ratio was also disappointing, and in 2020, we can’t deal with disappointing fillings. – Claire Toureille 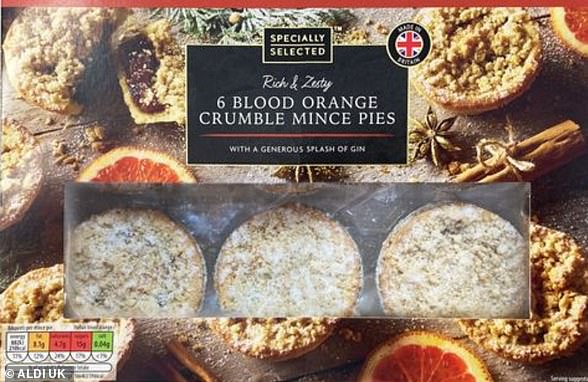 This has way too much pastry, and it was very crumbly. The ratio was way off and it flaked off just to touch. And the  filling wasn’t much better.

Very sickly and sweet like baby food, and not depth of complexity of flavour. Is it too much to ask for a sprinkle of cinnamon?

Maybe a nice treat for kids, but I wouldn’t be munching this in front of the Strictly Christmas Special.  – Bridie Pearson-Jones 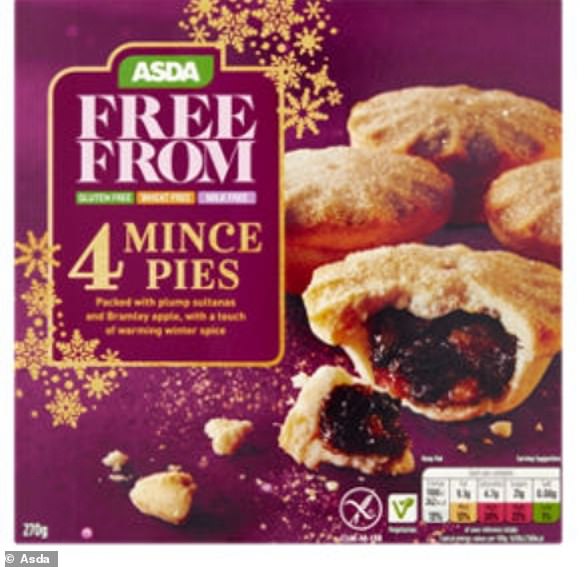 A boozy treat! I’m not sure if it’s just because of my lack of going to the pub in lockdown, but you could really taste the brandy and port in this mince pie.

I was slightly disappointed by the ratio of crust to filling, but munch enough of these and you won’t care!

They also are very pretty with a cute snowflake design, so very instagrammable for anyone doing a festive tablescape! – Bridie Pearson-Jones 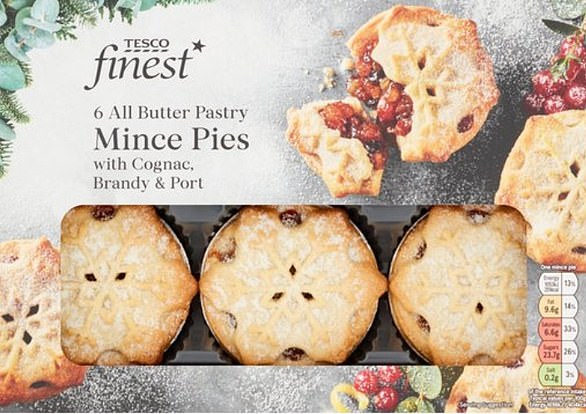 Bridie thought the taste of the mince pies were average, but that they had a very look for a festive tablescape

From its lattice top to its sweet almond flavour, Lidl has taken serious creative license with the traditional mince pie recipe to create this festive treat.

Packed with flavour, the almond definitely comes through but it is so sugary you won’t be able to manage more than one. Not one for the mince pie purists – Stephanie Bridger -Linning 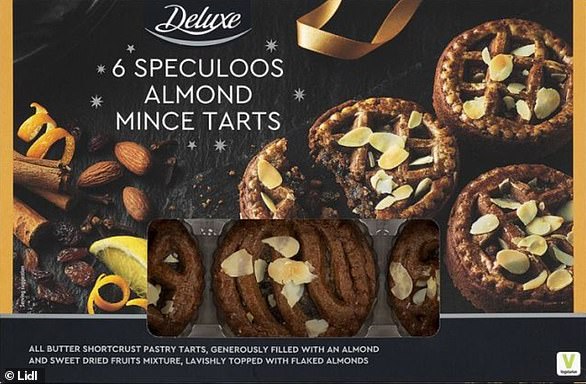 Steph thought these mince pies were packed with flavour, but not one for traditionalists

Not having a massively sweet tooth for mince pies, these mini versions were the perfect choice when you want a festive treat without going for anything too heavy, and even got the thumbs up from my fellow tester who doesn’t like mince pies at all.

The pastry was nice and crumbly, and the filling ticked the boxes for taste but was a little on the meagre side.

This led to them tasting a bit dry, so you’d still probably want some cream on the side to liven them up. – Siofra Brennan 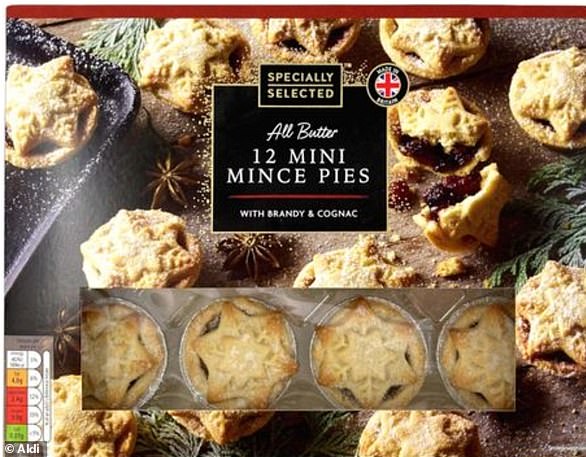 A perfectly good mince pie, with a buttery pastry case and a nice kick of brandy in the mincemeat. By no means a standout though – so a bit of a let-down for a premium product. – Rory Tingle 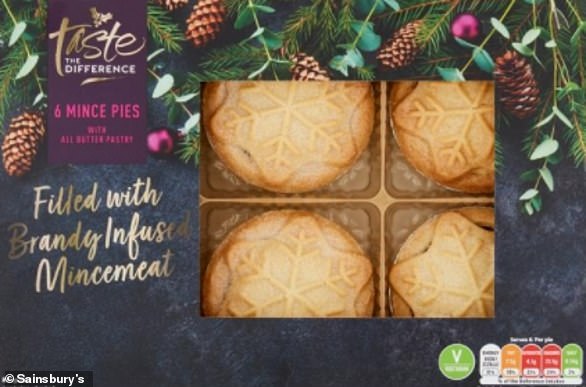 A classic mince pie. Not mind-blowing but not bad either. The filling was sweet and not overpowering, a great pick up for that mid-afternoon slump.

I would say it’s the teeniest bit dry – so one to have with a cuppa (or gin). – Bridie Pearson-Jones 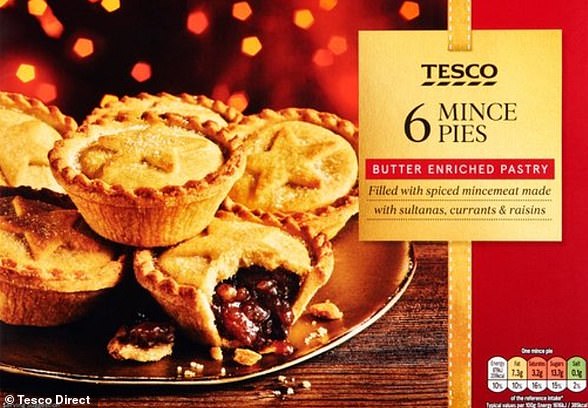 Bridie said the budger offering from Tesco wasn’t mindblowing, but wasn’t bad either

I’d happily munch on one of these at a village carol service, but probably wouldn’t buy a pack myself.

Asda hypes up a ‘luxury’ mincer packed with festive spices and ‘splashes’ of port and brandy. It was quite nice.

I couldn’t really taste the alcohol. Serving suggestion: with a large glass of port or brandy. – Jack Elsom 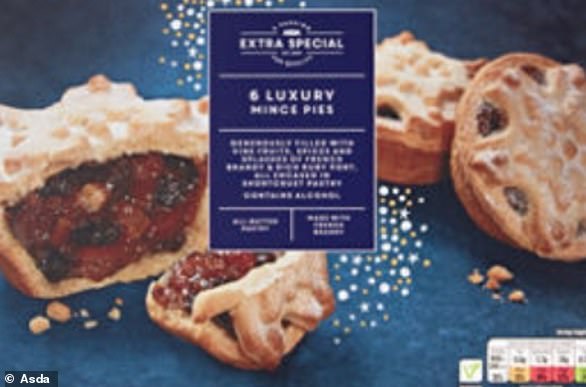 Jack said that he’d happily munch on these at a carol service, but couldn’t taste the alcohol

This pie has an incredibly crumbly crust which isn’t quite to my taste. It’s so crumbly that it completely falls apart in my hand, and I prefer my festive treats with a little bit of crunch and bite.

That being said, the flavour of the mince itself is delicious, with hints of cinnamon and a tangy after taste.

The dusting of icing sugar adds a little something extra to the soft pastry. – Harriet Johnston 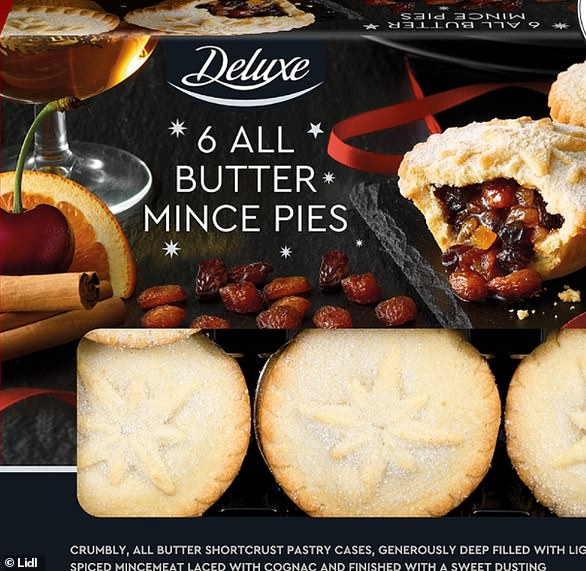 These were absolutely delicious and very buttery and the cognac gave them an extra festive kick.

My only gripe was that they were very crumbly and I didn’t manage to get any out of their foil in one piece! – Jessica Rach 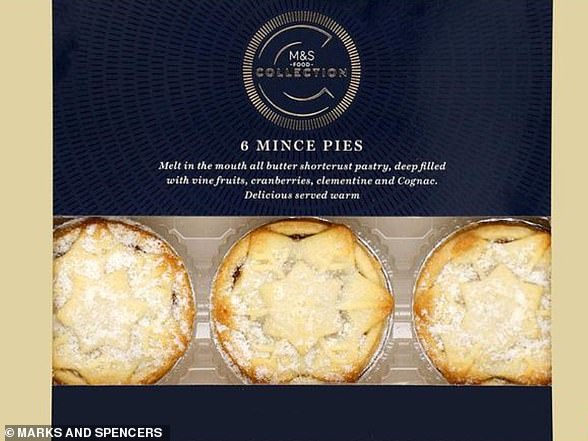