A family of five from Texas faces multiple charges for participating in the January 6 riot at the U.S. Capitol. The FBI said it received information from a tipster that led to the charges against Kristi Munn, Thomas “Tom” Munn, Dawn Munn, Joshua “Josh” Munn and Kayli Munn, according to court documents.

The court filing includes social media messages, photos and images from security video that officials say show the family, who traveled from Borger, Texas, to Washington, D.C. along with a child, who is not charged, inside the Capitol building with the mob.

The tipster initially told the FBI that Kristi Munn entered the U.S. Capitol, and later said Munn had traveled to Washington with her family. The tipster provided two screenshots of Kristi Munn’s Facebook account and six screenshots of her Snapchat account, according to the FBI’s statement of facts in the case. 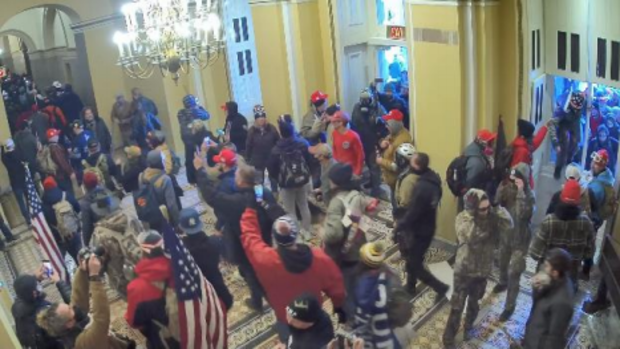 “The tipster is a relative of Kristi Munn’s fiancé. The tipster has personally met Kristi Munn and spent time with her during the 2020 Christmas holiday season, which was less than a month before January 6, 2021,” the FBI investigator stated.

One of the Facebook screenshots provided by the tipster was a photograph of Kristi and her family members, whom she tagged. “Washington D.C. here we come… #StopTheSteal #TrumpIsMyPresident,” the post read. 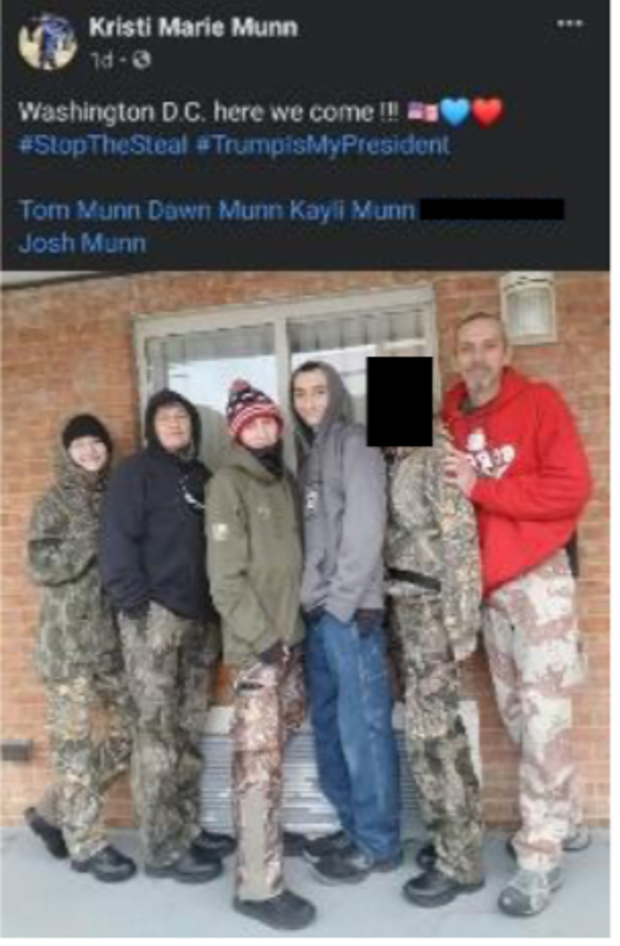 Another Facebook screenshot provided by the tipster shows a photo of Kristi, which appears to be taken outside with other protesters. “January 6th 2021… God Bless The USA,” the caption says. The Snapchat screenshots appear to show various angles of the U.S. Capitol, both inside and outside, as protesters swarmed the building.

The FBI reviewed the social media accounts of other Munn family members and found more evidence outlined in the court documents.

In a another conversation with Kelsi Munn that day, Dawn Munn wrote, “We stormed in….went in and out broken window!!” according to the filing.

The FBI spoke with Kristi Munn on the phone on January 26 and said she “admitted to going to the U.S. Capitol to see President Trump speak and to express her First Amendment rights to object to the electoral college results, but denied going inside the Capitol or participating in any violence, vandalism, or any other criminal activity at the Capitol.”

However, the FBI said it located multiple videos showing some or all of the members of the Munn family inside the U.S. Capitol on January 6, including video of the Munns inside the Capitol posted to the social media platform Parler.

In one piece of security footage from the Senate Wing Door, investigators said the Munns can be seen exiting the Capitol building by crawling through a window at approximately 3:17 p.m.

Tom Munn posted several photos from their travels to Washington, D.C. In one post that appears to show him and five individuals outside the Capitol, he wrote: “Made it back to the hotel about an hour ago . . . Have lots of pics and video to follow . .  . the DC police opened up on a small group climbing the scaffolding, with gas grenades . . . The  only damage to the capital building was several windows and sets of doors. Nothing inside the  capital was damaged. I can tell you, patriots NEVER made it to the chamber. There was no violence in the capital building, the crowd was NOT out of control . . . they were ANGRY!!!”

On Tuesday, four members of the family — Kristi, Tom, Dawn and Kayli Munn — were arrested in Borger, Texas, and Joshua Munn was arrested in Melrose, Wisconsin.

All five have been charged with:

The Department of Justice said last week that six months after the attack, more than 535 defendants had been arrested, and the FBI said they have yet to identify more than 300 individuals believed to have committed violent acts on the Capitol grounds, including over 200 who assaulted police officers.

Dozens of Capitol riot suspects have been reported to authorities by their own close personal contacts. According to court documents, the FBI has arrested many based on tips from family members, work colleagues, childhood friends and ex-lovers who called authorities after watching their acquaintances participate in the siege on TV or, in some cases, on the rioters’ own social media accounts.