Just 10 miles off the coast of Los Angeles lurks an environmental disaster over 70 years in the making, which few have ever heard about. That is, until now, thanks to the research of a University of California marine scientist named David Valentine.

Working with little more than rumors and a hunch, curiosity guided him 3,000 feet below the ocean’s surface. A few hours of research time and an autonomous robotic submersible unearthed what had been hidden since the 1940s: countless barrels of toxic waste, laced with DDT, littering the ocean floor in between Long Beach and Catalina Island. 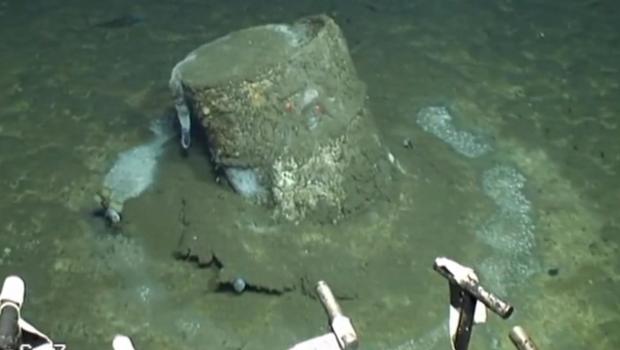 The fact that his underwater camera spotted dozens of decaying barrels immediately in what is otherwise a barren, desert-like sea floor, Valentine says, is evidence that the number of barrels is likely immense. Although the exact number is still unknown, a historical account estimates it may be as many as a half a million.

After 70-plus years of inaction, Valentine’s research has finally helped initiate a huge research effort to reveal the extent of the contamination.

But this offshore dump site is only a part of the story of environmental damage from years of DDT discharge along the coast of Southern California — a story which likely won’t be closed for decades to come because of its ongoing impact, including a recently discovered alarming and unprecedented rate of cancer in the state’s sea lion population, with 1 in every 4 adult sea lions plagued with the disease.

The history of DDT dumping

The chemical DDT was invented in 1939 and used during World War II as a pesticide helping to protect troops from insect-borne diseases like Malaria. After the war, production of the chemical ramped up and it became routinely used in the spraying of crops, and even over crowded beaches, to eliminate pests like mosquitos. 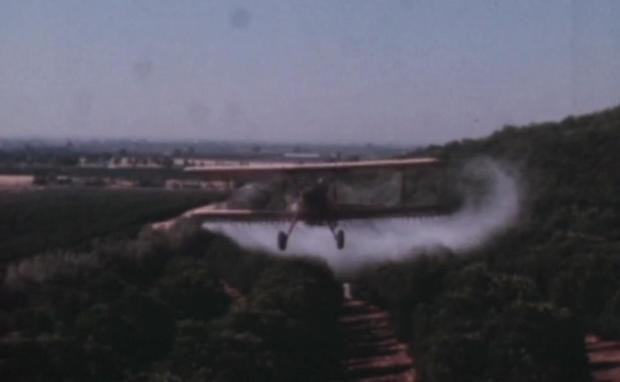 But in the 1960s, DDT was discovered to be toxic. Over time, eating food laced with DDT builds up inside the tissues of animals and even humans, resulting in harmful side effects. The EPA now calls it a “probable human carcinogen.” In 1972, when the U.S. government started taking environmental pollution seriously with legislation like the Clean Air Act, DDT was banned in the United States.

The largest DDT manufacturer in the U.S., Montrose Chemical Corporation, was located along the Southern California coast in the city of Torrance. From 1947 through 1982, Montrose manufactured and distributed DDT worldwide. In doing so, a byproduct mix of toxic sludge made up of petrochemicals, DDT and PCBs was produced.

For decades, that hazardous waste was disposed of in two ways. Some of the toxic pollution was dumped into storm drains and the sewer system, which was then pumped out to sea through outflow pipes, two miles offshore of the city of Rancho Palos Verdes.

The rest of the waste was disposed of in barrels which were loaded onto barges and floated 10 to 15 miles offshore to waste dumping sites off Catalina Island and then jettisoned into the ocean. 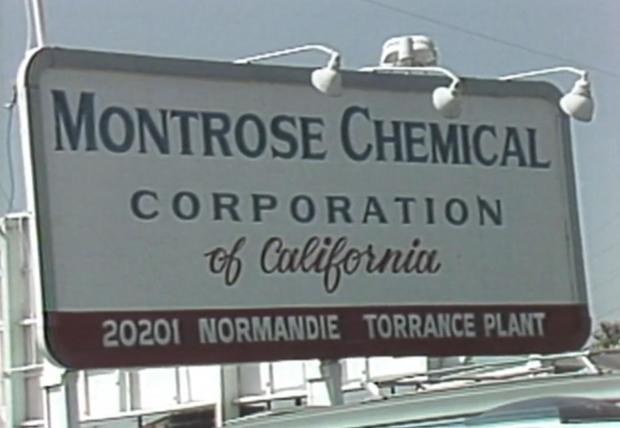 While it may seem hard to believe, at least part of the dumping was legally permitted. Back then, Valentine says, the prevailing thought was the ocean’s were so huge that they could never be compromised. The mantra was “dilution is the solution to pollution” — in hindsight a naïve notion.

But while the designated dumping site was very deep — in 3,000 feet of water — Valentine says shortcuts were taken, with barrels being dumped much closer to shore. And, in an effort to get the barrels to sink, there is evidence that many were slashed, allowing poison to leak, as they were dropped into the ocean.

For decades, the existence of these toxic barrels was surmised only by a very small group of scientists and regulators. That’s despite a startling report produced in the 1980s by a California Regional Water Quality Control Board scientist named Allan Chartrand, which asserted there may be as many as 500,000 barrels laced with DDT sitting on the ocean floor.

The report was largely ignored. But after nearly 30 years, Valentine dusted it off as he began his quest to see if these barrels existed.

Unlike the deep water dumping sites, the shallower toxic site — called the Palos Verdes Shelf — two miles off the beaches of Rancho Palos Verdes was well-known and documented. In 1996, this zone was declared a Superfund clean-up site by the EPA, now comprising a 34-square-mile area. Montrose was sued and after a protracted legal battle ending in late 2000 the companies involved, including Montrose, settled for $140 million. 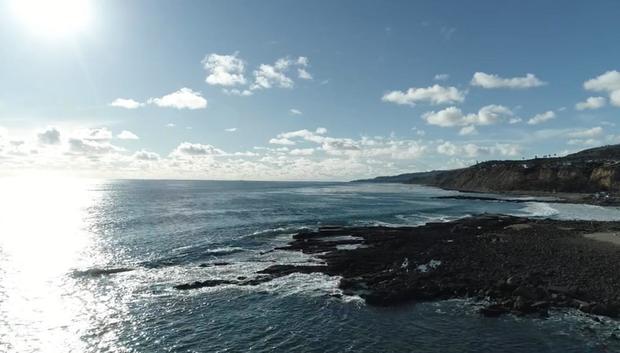 Over the past two decades, most of the money has been used by a program called the Montrose Settlements Restoration Program (MSRP) to try to restore the contaminated sites. Half of the funds were allocated to the EPA and National Oceanic and Atmospheric Administration (NOAA) to rehabilitate ecosystems impacted by the poison.

DDT gets into the food chain when it is consumed from the contaminated ocean bottom by tiny marine creatures, which are then eaten by small fish, which are then consumed by larger fish and marine mammals, like sea lions. Over time DDT builds up in the tissues and blubber of marine animals, a process called bioaccumulation. To this day, signs all along the Southern California coast warn fishermen not to eat certain fish. Despite this, you cannot get DDT contamination from swimming in the water.

Scientists say the contamination at this shallower water site is the most likely food chain route which leads to DDT building up in sea lion blubber. That’s because there is a much greater amount of marine life living in shallower water. But that does not rule out contamination from the much deeper site as well.

To try to remedy these pollution problems, NOAA has used its share of the funds to manage almost 20 restoration projects off the L.A. coast, like restoring kelp forest habitat, helping migratory seabirds and restoring 500 acres of critical coastal marsh habitat in Huntington Beach.

The last project of the effort — just completed — was the commissioning of an artificial reef just off the beaches of Rancho Palos Verdes. To accomplish this, NOAA hired a team of scientists from the Southern California Marine Science Institute and Vantuna Research Group at Occidental College to design and deploy the reef.

The reef building effort was led by Jonathan Williams, a marine biologist from Occidental College. The project involved strategically placing more than 70,000 tons of quarry rock on the ocean bottom just off the beach. Williams says that the reef was an immediate success, with thousands of fish flocking to the rocks. 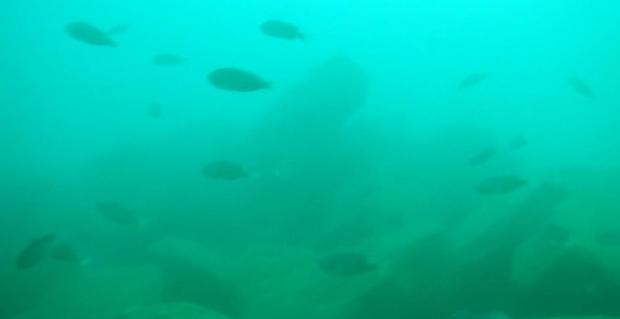 This reef site is much closer to shore than the contamination site, which is two miles from land. That’s by design. Williams says the idea is to construct new habitat for fish and kelp in uncontaminated areas to build up healthy populations of fish. This helps limit the amount of toxins, like DDT, which enters the food chain.

As predators at the top of the food chain, DDT in fish is also a danger to people. Williams says this is especially true of underserved communities who are mostly likely to subsistence fish, eating what they catch. In this way, NOAA’s project addresses environmental justice by attempting to make fish more safe to eat.

Two miles offshore, Williams says that after years of measuring high levels of DDT on the Palos Verdes Shelf, levels have started to drop precipitously, a sign that some of the DDT may finally be starting to break down.

Despite the fact that the toxic barrels were dumped in the 1940s, 50s and 60s, their existence just became common knowledge this past fall when the Los Angeles Times published a feature on Valentine’s work. But his discovery dates all the way back to 2011 when he first decided to see if the rumors of the barrels were true. In 2013 he made another short trip to the site. But his research was not published until March of 2019.

In all, his time-limited work yielded visuals of 60 barrels. Besides bringing back video of the leaking barrels, his team was also able to collect samples from the ocean floor. One of them registered a contamination 40 times greater than the highest contamination at the Superfund site, indicating that the toxins down deep are still very concentrated.

Armed with this compelling evidence, Valentine said that he “beat the drum” for years, speaking to various government agencies, trying to get some interest, but to no avail. However, when the L.A. Times story came out, interest finally followed as public outcry grew.

I was shocked when I heard that a company was allowed to dump thousands of barrels of DDT waste off the coast of California decades ago. Even more concerning is these barrels of toxic waste were ignored for so long when they pose a threat to ocean wildlife and human health. https://t.co/3gf3BvrNCy

But before his discovery in 2011, Valentine placed part of the blame for the lack of knowledge about the barrels on the lack of technology to find it. It’s only in the past couple of decades that the technology became available to make this deep water research feasible. 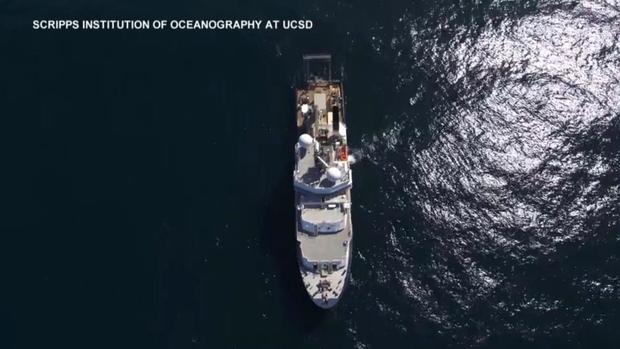 Employing a large research vessel called the Sally Ride, 31 scientists and crew members, and two high-tech autonomous robots they call Roombas, the team used sophisticated sonar to map the ocean bottom and assess how many barrels there are. 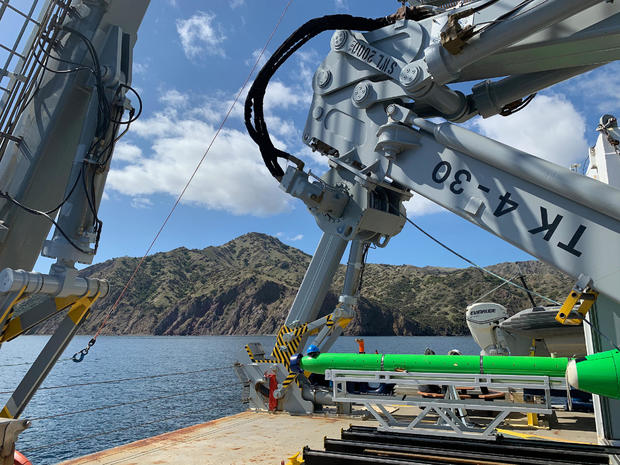 As of our last conversation with Eric Terrill, the team leader, the final number had still not been tallied. But even as early as a week into the research mission, Terrill described detecting tens of thousands of targets and said the number of barrels seemed “overwhelming.”

The two-week mission is now complete, but the team is still putting together the pieces. They expect to have a final report published at the end of April.

Located right near the Golden Gate Bridge, the mission of the Marine Mammal Center in Sausalito, California is to rescue marine mammals in distress. Since 1975, the organization says they have rescued 24,000.

In December, the team published a 30-year study on sea lions, finding an alarming statistic: 25% of adult sea lions have cancer.

CBS News interviewed the lead veterinarian Dr. Cara Field. She called the number of sea lions with cancer both “extremely alarming” and “unprecedented in wildlife.” Last year the Marine Mammal Center had to euthanize 29 sea lions because of cancer. 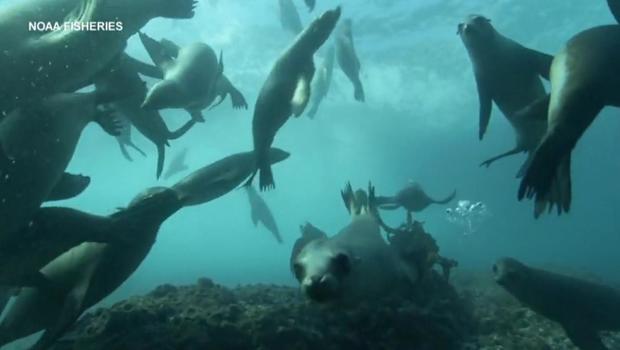 In the report, the research team pointed to a combination of herpesvirus and contaminants like DDT and PCBs as the cause of cancer. In all cases of cancer, sea lions had elevated levels of DDT and PCBs in their blubber. The theory goes that the contaminants weaken the body’s immune system, making the virus more effective.

Because sea lions travel up and down the California coast yearly, scientists believe they may pick up the contaminants when they are near their breeding site on the Channel Islands off the coast of Southern California.

And while it seems logical that the sea lion contamination is coming from polluted sites in shallow water, scientists do not yet know how much of the DDT from barrels in deeper water may be entering the food chain. This, they say, will require more research.

While there are still many unanswered questions, one lesson from this story of DDT contamination is clear: When humans callously pollute the environment it can have consequences for generations to come. One current example is human-caused climate change. The question is, how much of a burden will our children and grandchildren have to bear as result of our choices?