The pandemic wrecked havoc on the mental health of the nation as working lives changed, fragmented, paused or intensified.

Certain industries went through mass redundancy while, on the other end of the scale, some experienced an unprecedented demand for services that worked people to the bone.

All of this upheaval had knock-on effects on finances and working patterns.

It’s a lot to bear mentally, all through a pandemic.

The driving industry is no exception – from cab drivers, to public transport drivers to delivery drivers, the last 18 months have been no easy feat.

‘I used to work five to six days a week, then the pandemic came and everything got turned upside down,’ she says. ‘There was no demand for me anymore.

‘It was quite stressful, going from earning maybe £80 to £90 a day to all of a sudden nothing, and yet the bills kept coming in,’ 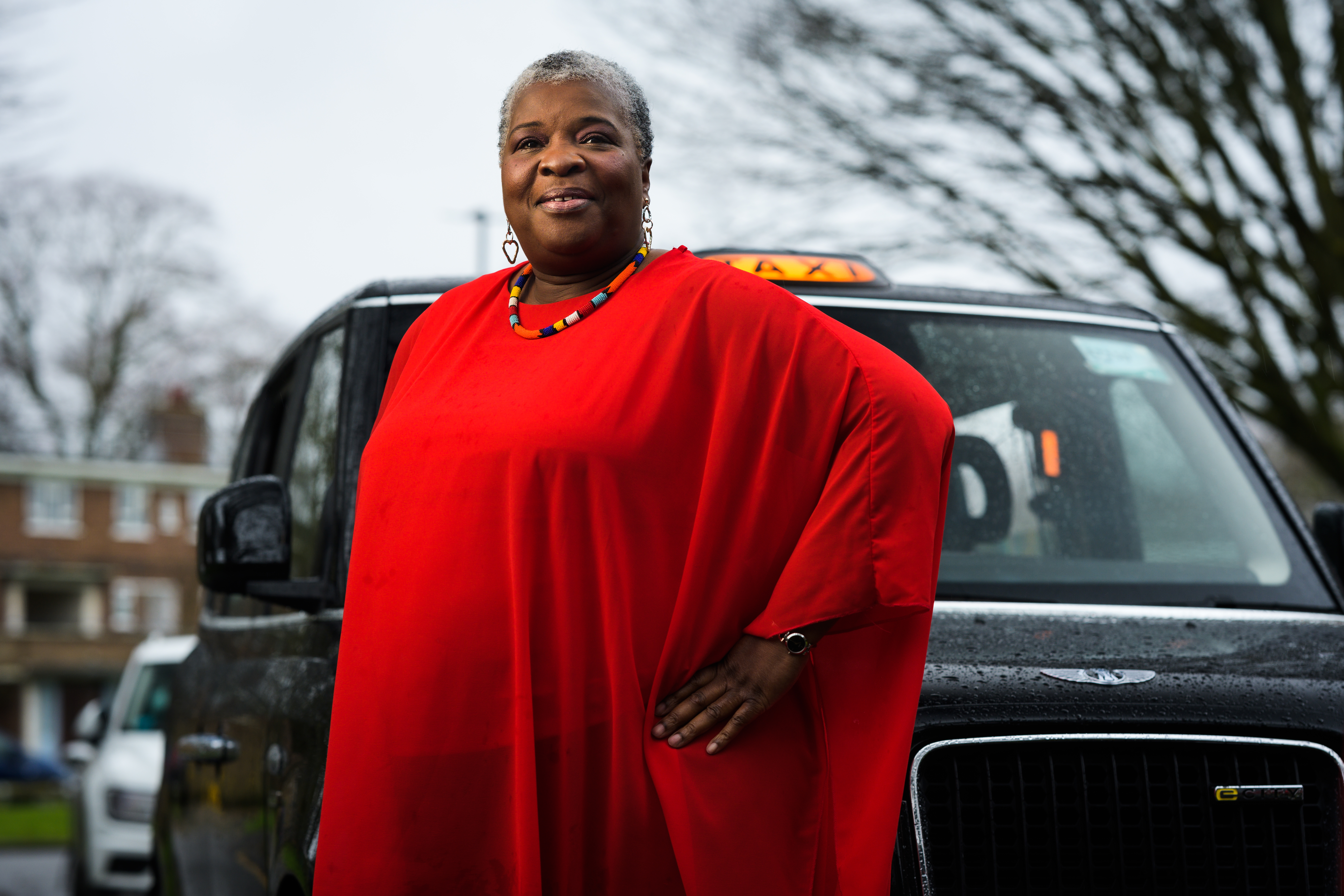 The year before, Mencie had invested in an electric cab, for which she was still making payments.

To make ends meet she tried to look for other work, without success, while her daughter – who she credits with ‘keeping me sane’ – gave her money each month to live on.

‘My routine was crushed and it did my mental health in,’ says Mencie, ‘but because I was alive and well, I was just thankful that I was still here.

‘There were a lot of cab drivers who had died.

‘There were two brothers who died within four weeks of each other and in the first half of the pandemic I must have had six or seven funerals I couldn’t attend. As cab drivers we just had the cabs outside the cemetery and lined up to show respect for the drivers who had passed away. It was hard and you’d think: it could be any one of us.’

The stress of a public-facing role intensified the anxiety that came with the pandemic, but in the summer of 2020 when restrictions eased a little, Mencie felt she had to push to get as many fares as possible.

Having previously been a night driver, she switched to day shifts due to London having no night life.

‘It was dog eat dog out there, everyone’s competing for the same people,’ she explains, adding that she used to stay out later if a call for a cab happened even on her way home, due to the need for money.

As cab drivers we just had the cabs outside the cemetery and lined up to show respect for the drivers who had passed away.

Elsewhere in the industry, delivery drivers have experienced the opposite problem, as workloads increased so much that they have been left mentally drained and exhausted.

Charlie, who lives in Scotland, took up delivery driving in November 2020 after struggling to find work as a sports instructor due to the pandemic. He’s self-employed and has driven for companies such as Amazon and DPD.

Despite being self-employed, he says the work is guaranteed due to the demand for delivery drivers, given our boosted need for online shopping.

However, the fallback to working this way is that the ‘workload is high’ with an increasing number of parcel drops expected in a day.

‘I don’t know any drivers that take a lunch break,’ he says, ‘toilet breaks are very difficult to do and finish your day at a reasonable time because any break you take is all just added onto the end of your day. There’s no allowance for that.’

The pandemic has made the logistics of even finding a toilet to use harder. Charlie Charlie says that often he and his colleagues use empty bottles and plastic bags while en route.

Earning roughly £85 a day, which Charlie says is industry standard, he tells us: ‘The expectation is pretty much you just stay out until you’ve delivered everything.’

Being self-employed heightens this pressure due to the fear of losing future work if targets aren’t met.

This is despite only being legally allowed to drive each day for a certain number of hours. Charlie has a tracker in his work van to monitor this driving limit, but he is concerned whether it works properly.

‘There’s a really high turnover in the companies because people reach a point where they’ve had enough,’ Charlie say. ‘I get to the end of the week just absolutely shattered, mentally and physically exhausted because it’s constant work and constant stress.’

On his days off he often stays in ‘recovering’, so work still eats up time in his personal life.

Then there are drivers in the public service industry. Tariq*, a 56-year-old bus driver in Bradford, has spent 34 years in the role and tells us that he ‘loves’ his job – but that passion has been tested over the pandemic.

‘There has been a massive change the industry – all our working conditions changed,’ Tariq tells us. ‘We were put on 44 hours a week – which we’d normally do in six days – we were asked to do that in five days.

Tariq says there was a lot of fear at the start of the pandemic, when no one really knew much about the virus and masks weren’t compulsory.

He feels that protective measures for drivers came in far too late.

Along with colleagues, he approached his company to see if cash could be banned on his company buses to limit the risk of transmission that way.

Tariq and his colleagues weren’t helped here, as, he says: ‘Unfortunately the government agreement that was in place did have a clause that said all passengers should have the opportunity of cash payments.’

‘It was only after the wave of brutalities due to coronavirus in the London region that a lot of employers then started taking notice of our safety,’ he adds. ‘I think the whole industry was let down by the government.’

The lack of support caused anxiety, both in himself and in work friends. He says ‘we’re all feeling the hangover of it’ still, with each attack on public service workers making the industry workers ‘angry, uncertain and scared’.

Having to deal with belligerent members of the public on transport is a frequent occurrence, and Tariq tells us that particularly during the pandemic workers are fearful ‘of getting in confrontation with passengers’ due to the risk of Covid-19.

There’s been anxiety about making family members ill and people ‘taking work home with them’ due to the intensely long shifts.

He does feel his company has done more to promote its mental health support offerings as a result, but notes that it has taken the events of the last year for those provisions to be taken seriously and advertised more widely.

While online shopping continues to reign and public life isn’t operating as normal, the mental health of those in the driving industry will continue to suffer.

Unite the Union officer Bobby Morton tells us: ‘Drivers have been on the frontline since the beginning of the pandemic and have risked their lives to keep the UK moving.

‘Given the demands and the risks it is not surprising that this the pandemic has had a severe effect on the mental health of drivers and it is essential that companyies are aware of this and take the necessary steps to help drivers during this time.’

Life may be well on its way to getting back to ‘normal’, but by no means is the pandemic over. For drivers, working conditions continued to be ravaged by the virus.

*Name has been changed to protect their identity.

To chat about mental health in an open, non-judgmental space, join our Mentally Yours Facebook group.