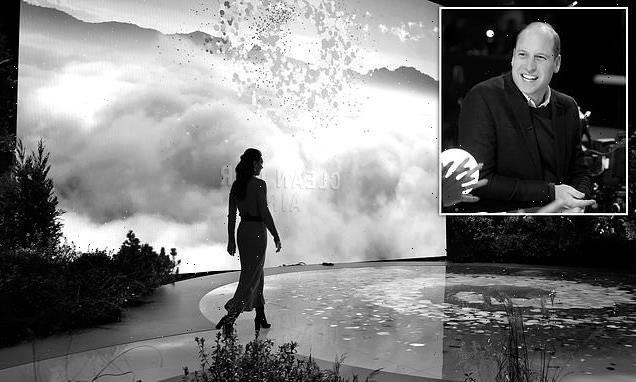 Vegan makeup, BURLAP decor… and recycled outfits for the royal hosts: Inside Prince William and Kate’s VERY eco-friendly plans for glitzy Earthshot Prize gala – as they share behind-the-scenes glimpse at their prep for the star-studded event

It has been hailed as Prince William’s ‘Super Bowl’ moment – and the royal seems determined to ensure that his glitzy, eco-friendly Earthshot Prize gala tonight is nothing short of a triumphant touchdown.

On the surface, the star-studded event has all the trappings of a glamorous Hollywood awards show, from its very well-publicized build-up to its list of celebrity guests, which includes the likes of Billie Eilish, Annie Lennox and Rami Malek.

But while William and Kate are no doubt hoping that the A-list crowd will help to draw positive attention to their event – which is taking place under the shadow of Buckingham Palace’s race row and in the wake of Prince Harry and Meghan’s bombshell Netflix trailer drop – they are also very eager to ensure that not a single foot is put out of line as far as the gala’s eco-friendly theme is concerned.

To that end, the couple – who today amplified the hype surrounding the event by releasing a series of artsy black-and-white images of themselves preparing for it – has implemented a host of very ‘green’ measures for the evening’s soiree, from wearing ‘recycled’ outfits on the red carpet to using burlap decor and a re-used green carpet. 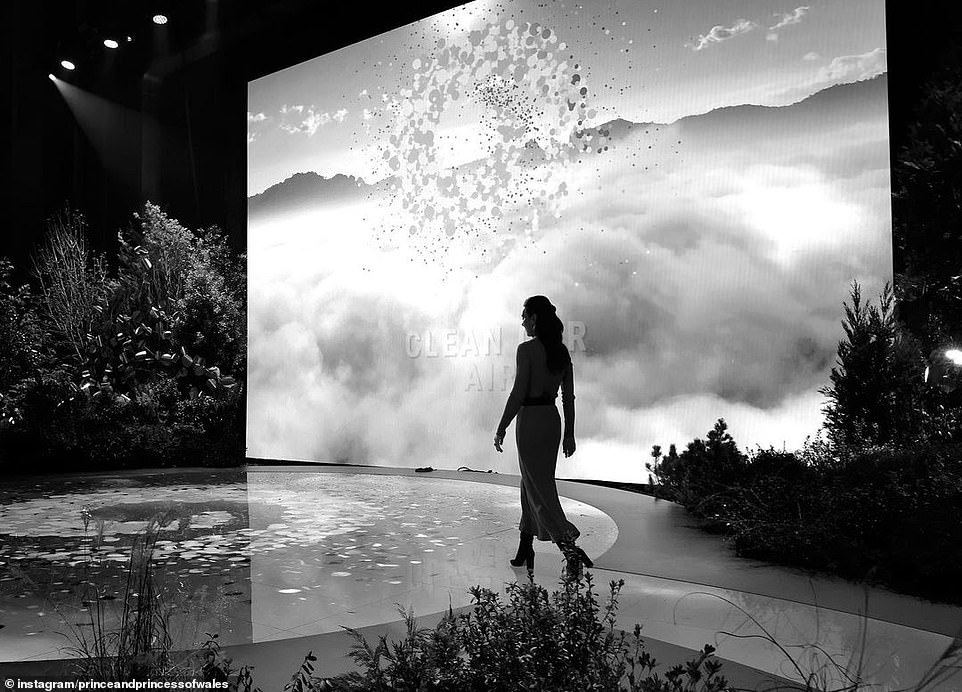 Prince William and Kate Middleton are due to host their glitzy, eco-friendly Earthshot Prize gala in Boston this evening – and the couple shared a glimpse at some of their last-minute preparations on Instagram today 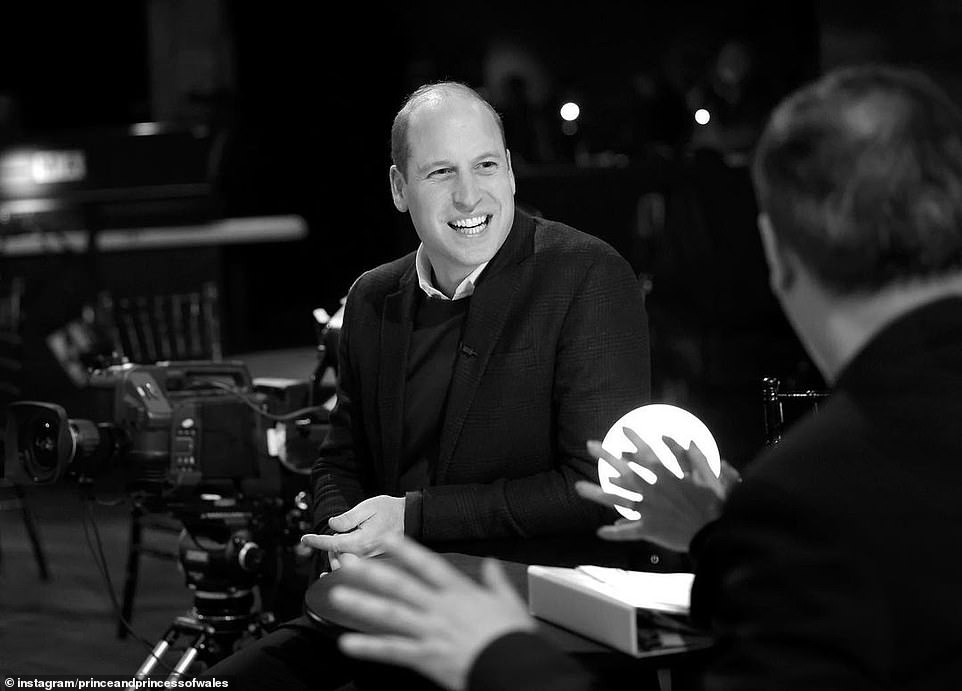 In the artsy black-and-white photos, the Princess of Wales is seen strutting across a lit-up stage surrounded by greenery, while her husband is pictured chatting with organizers

In short, the Earthshot Prize – and its accompanying TV broadcast – is set to be one of the greenest televised events in history.

Even before the guests arrive at the gala they will have been given a very green dose of eco-friendly advice and rules to follow, with attendees encouraged to ‘consider their clothing’ for the occasion and opt for ensembles that can be re-used, or have already been purchased second-hand.

Travel plans for guests have also been given environmental updates: all transportation being used with Boston is electric or hybrid and any ‘unavoidable’ flights that were taken have been ‘recorded and the CO2e impacts were calculated and balanced’.

Even William and Kate jetted into the US on a commercial British Airways flight – no doubt hoping to avoid the controversy that has plagued the Sussexes over their repeated use of private jets, despite the couple professing themselves to be environmentalists.

Then, upon their arrival at the event, guests will be treated to a host of ecologically-minded measures, from the plant-focused decor to the vegan and vegetarian-only catering options.

Instead of a red carpet for the stars to walk down, last year’s green carpet is being re-used – and it will be recycled afterwards.

All the flowers are also grown locally within a 100 mile radius of the MGM Music Hall in Boston. Most are ‘root ball’ plants, wrapped in burlap, to stay as green as possible and will be donated to local community-based organization after the show.

BBC Studios, who are staging the event and won a BAFTA for last year’s show, have flown over just 10 members of staff out of a crew of 150, hiring local firms instead.

No gas lighting will be used with all fixtures being LED battery-operated and charged locally in Massachusetts. 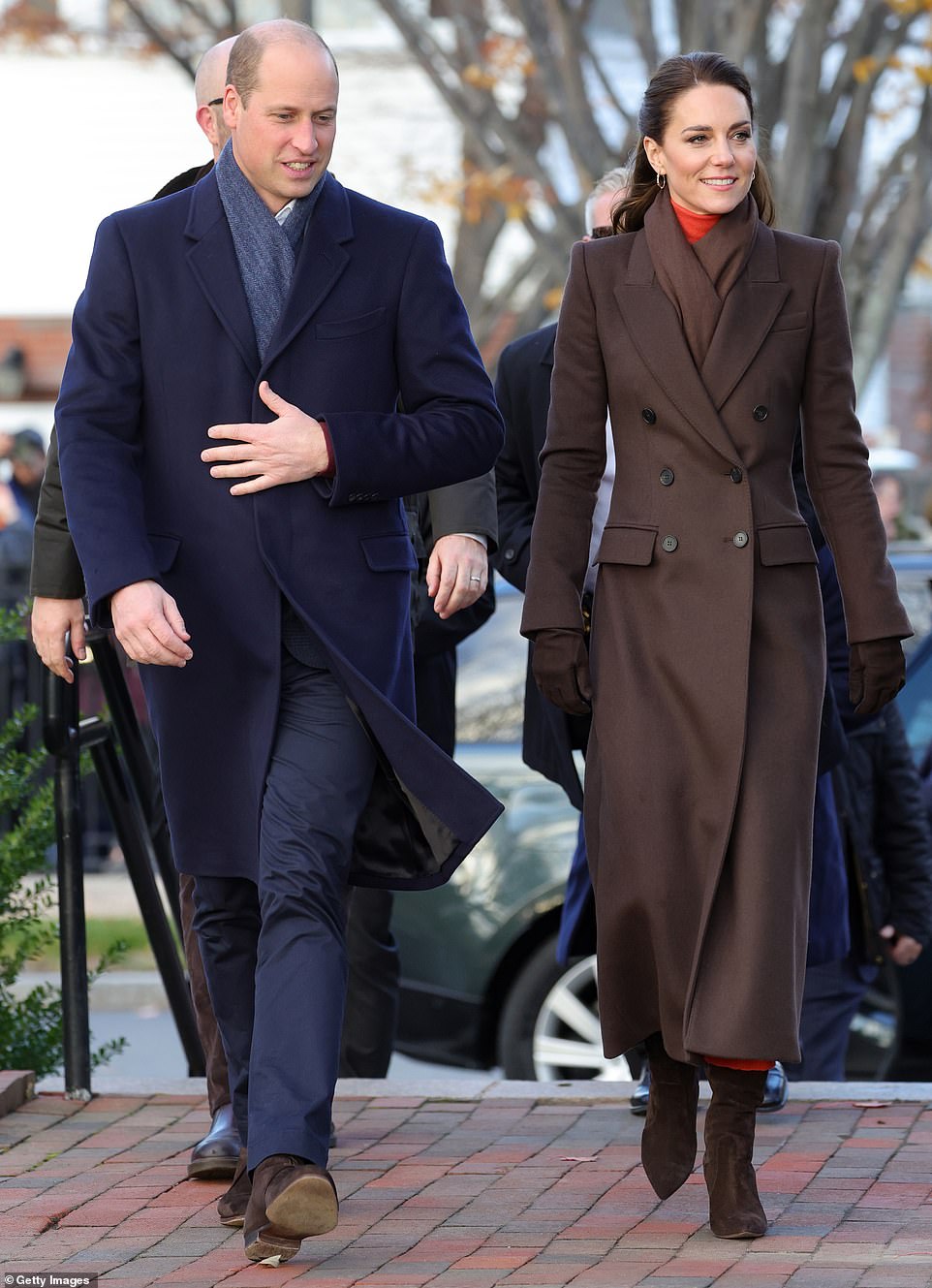 Needless to say, William and Kate need this evening’s event to go off without a hitch. While much pressure was already being placed on the gala – which has been described as the Prince’s ‘Super Bowl moment’ – that weight increased tenfold in the wake of the controversies that have overshadowed the couple’s US tour 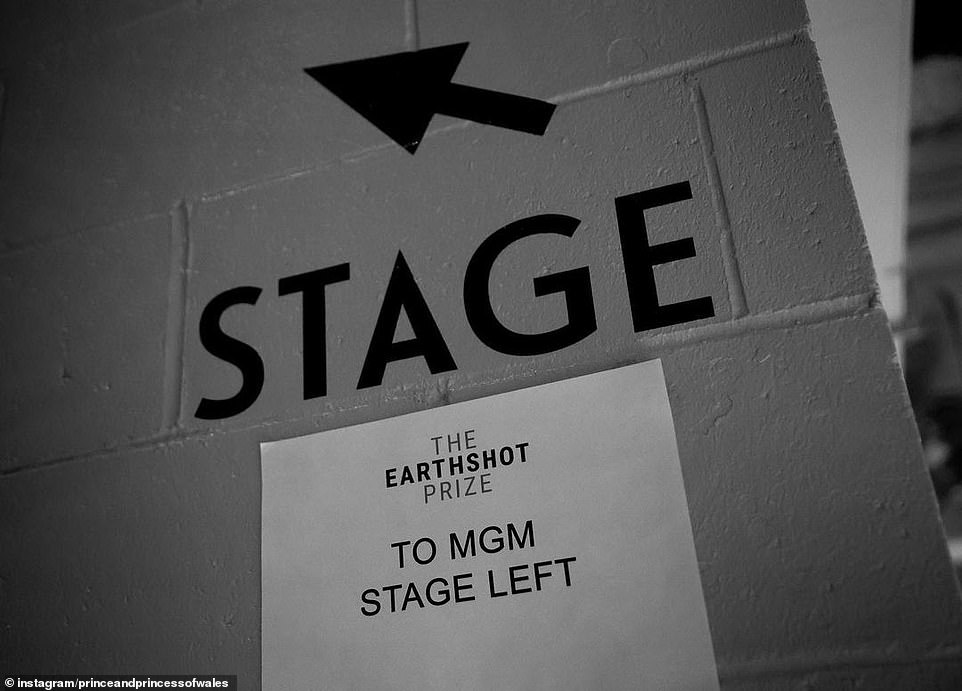 The stars’ hotel is walking distance from the venue and everyone is being encouraged to either use the tram or take a fleet of electrically-powered and hybrid taxis.

Even the make-up being used is largely vegan and certified cruelty-free, while the food being served to stars and crew is plant-based – and there is a ban on single-used plastics. 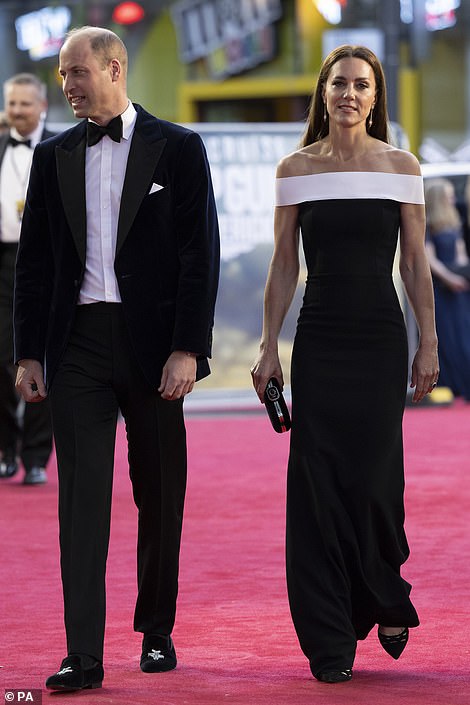 Guests at the event are being encouraged to wear re-used, vintage, or second-hand clothing – and it is expected that William and Kate (seen at a red carpet event in May) will follow that guidance

‘We are encouraging everyone that is coming to the awards to take the lowest carbon impact option possible. What isn’t will be offset.’

Needless to say, William and Kate need this evening’s event to go off without a hitch. While much pressure was already being placed on the gala – which has been described as the Prince’s ‘Super Bowl moment’ – that weight increased tenfold in the wake of the controversies that have overshadowed the couple’s US tour.

While the Prince and Princess of Wales have not faltered in their engagements thus far, remaining cool, calm and collected, at least on the surface, behind-the-scenes, the Monarchy is grappling with two large scandals, both of which have unfolded during the couple’s first US trip in eight years.

On Tuesday night, hours before William and Kate touched down at Boston Logan International Airport, the Prince’s own godmother, Lady Susan Hussey, sparked a furious race row when she was accused of making racist comments to black domestic abuse campaigner Ngozi Fulani at a Buckingham Palace event.

As William and Kate were mid-flight, their Kensington Palace spokesperson issued a statement condemning the ‘unacceptable’ comments made by Lady Hussey – who resigned from her role in the royal household – however the controversy has already cast a bleak shadow over what was meant to be a ‘Super Bowl’ moment for the Prince.

Then, on Wednesday morning – the first full day of engagements for the pair – Prince Harry and Meghan Markle dropped the trailer for their bombshell Netflix documentary in a move that has been described as a ‘declaration of war’ by Palace insiders.

The teaser trailer dispelled any hopes that the Sussexes are willing to work towards a ceasefire in their acrimonious battle with the Royal Family.

As well as including dozens of supposedly private pictures from their family album, the footage includes a voiceover from Harry saying gravely, ‘no-one sees what’s happening behind closed doors’ over a black and white picture of his wife on an armchair, apparently crying.

The film then immediately cuts away to a shot focusing on a pinched-looking William and Kate at the 2019 Commonwealth Service in London, with the Sussexes sitting meekly behind them.

The message, say royal sources, is unmistakable. ‘I don’t see how anyone could view it as anything other than a declaration of war,’ said one. 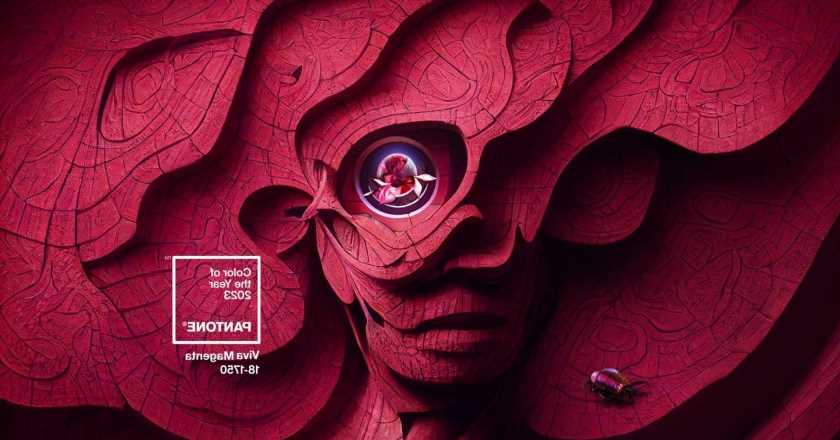 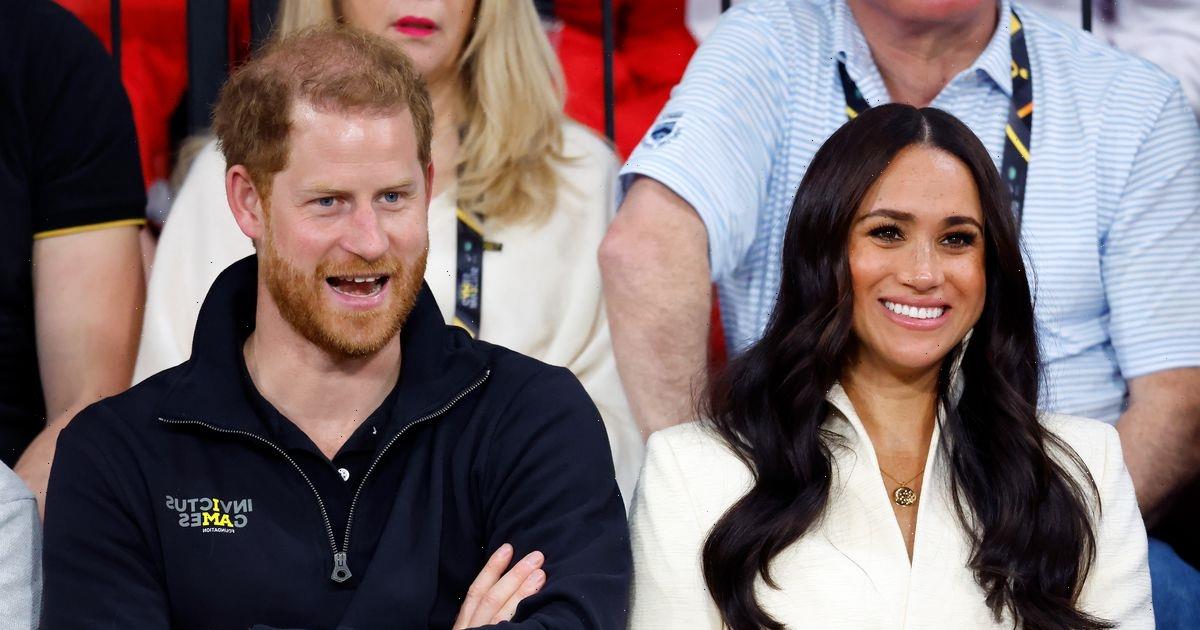