Viewers of BBC2’s new Rupert Murdoch documentary were struck by a scene in which Kate Garraway’s husband Derek Draper is seen healthy and ‘in his prime’ at Tony Blair’s 1997 election victory celebration.

Political advisor Mr Draper, who is currently in hospital recovering from Covid-19, was filmed standing next to Labour grandees including Neil Kinnock, John Prescott and Peter Mandelson at the celebration at London’s Royal Festival Hall on the night Mr Blair was elected Prime Minister for the first time.

Footage of the event was shown on Tuesday night’s premiere of BBC2’s The Rise of the Murdoch Dynasty, which explores how Rupert, now 89 and married to fourth wife Jerry Hall, 64, became one of the world’s most powerful figures, owning huge chunks of the global media industry.

Several viewers were struck by seeing Mr Draper ‘in his prime’ and noted the poignancy of the song being played at the event: D:ream’s Things Can Only Get Better. 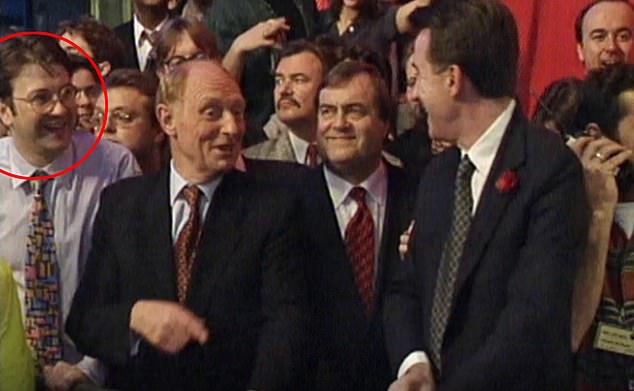 Derek Draper, circled, who is in hospital recovering from Covid-19, was filmed standing next to Labour grandees including Neil Kinnock, John Prescott and Peter Mandelson at the celebration at London’s Royal Festival Hall on the night Mr Blair was elected Prime Minister for the first time. The footage (pictured) was featured in BBC2’s The Rise of the Murdoch Dynasty 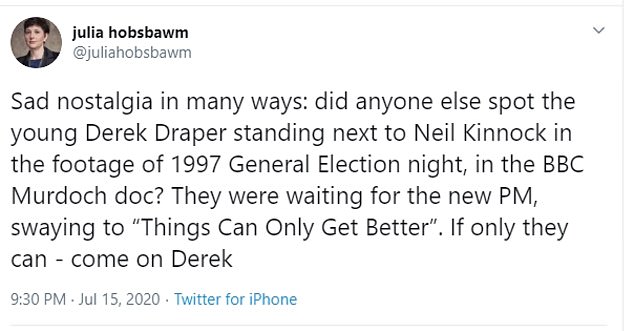 Several viewers were struck by seeing Mr Draper ‘in his prime’ and noted the poignancy of the song being played at the event: D:ream’s Things Can Only Get Better

One tweeted: ‘Sad nostalgia in many ways: did anyone else spot the young Derek Draper standing next to Neil Kinnock in the footage of 1997 General Election night, in the BBC Murdoch doc?

‘They were waiting for the new PM, swaying to “Things Can Only Get Better”. If only they can – come on Derek.’

Others were quick to agree, including columnist Iain Martin who wrote: ‘Yes – had exactly the same thought.’

Another Twitter user added: ‘Yes, it’s quite a clip. Best wishes to him, his wife and family.’

The documentary, the first episode of which aired on Tuesday, details how children Elisabeth, now 51, Lachlan, now 48, and James, now 47, fiercely fought for control of the Murdoch conglomerate in the late 90s, before their father’s shock decision to remain head of the empire.

Viewers tuning in took to social media to remark on the obvious similarities between the documentary and the HBO series Succession, which follows the lives of the Roy family – who come to blows over the inheritance of an entertainment empire owned by their ageing father, Logan (Brian Cox).

Part of the episode examined Murdoch’s role as a ‘kingmaker’, focusing on how his all-out support for Blair shaped the outcome of the 1997 election. 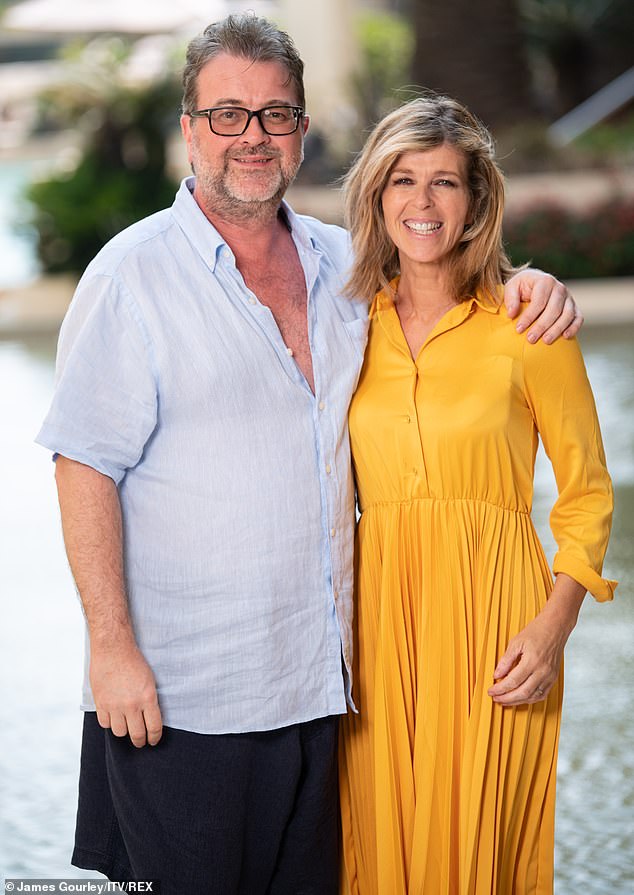 Mr Draper, who shares two children with his TV presenter wife Kate, was recently brought out of a coma after a life-threatening battle with coronavirus. Pictured, the couple in December

Derek, who was an advisor to Blair’s government, is best-known for his career as a former lobbyist who suffered a fall from grace when he was embroiled in two scandals: 1998’s Lobbygate and in 2009 a scandal surrounding LabourList, the website he edited.

In 1998 he was caught in a sting by an undercover Observer reporter, bragging about his access to government ministers.

A timeline of Derek’s coronavirus battle

Kate revealed she and Prince Charles had got ‘relatively close’ at the Prince’s Trust Awards on March 11 – Charles was diagnosed with coronavirus in mid-March.

‘He said he had a headache, numbness in his right hand, and was struggling to breathe,

‘I rang Dr Hilary (Jones) and tried to get through, he talked to Derek. He said put me back on, I think you need to call an ambulance’

Derek, 52, was taken into hospital on March 30 and remained in an unresponsive condition.

Kate and her children isolated at home after she displayed ‘mild symptoms’.

‘I’m afraid he is still in a deeply critical condition, but he is still here, which means there is hope.’

Kate said: ‘The journey for me and my family seems to be far from over as every day my heart sinks as I learn new and devastating ways this virus has more battles for Derek to fight.

That month, Kate and her family took part in the final clap for carers

She said: ‘I’ll never give up on that because Derek’s the love of my life but at the same time I have absolute uncertainty’

On June 5, Kate revealed Derek is now free from coronavirus but continues to fight against the damage inflicted on his body

On July 5, Kate revealed Derek has woken from his coma but he remains in a serious yet critical condition.

On July 8, she announced she would be returning to GMB, after being urged by doctors to ‘get on with life’ during Derek’s recovery.

She added that Derek had ‘opened his eyes’ after waking from his coma, but has been told his recovery could take years.

On July 13, Kate returned to GMB for the first time since Derek was hospitalised.

The Lobbygate scandal led to his Daily Express column being axed, the loss of his lobbying job and his firing from his role as editor of New Labour Magazine Progress.

Mr Draper, who shares two children with his TV presenter wife Kate, was recently brought out of a coma after a life-threatening battle with coronavirus.

Kate, who has spoken publicly of her husband’s health battle revealed he had ‘almost died six times,’ during his battle with Covid-19 and remains in hospital as he recovers.

Now that Derek has been declared COVID-free, Kate admitted she fears for the long-term damage the virus may have done, and whether that will affect Derek in his recovery.

She said on GMB: ‘When he went into hospital, I got some texts saying ”oh I’m definitely not gonna die, tell the children I’m doing great,” but there was a feeling of terror because he had COVID and suddenly it escalated.

‘And then suddenly it became everything, and each stage has been sort of a new terror and just when I thought we were moving forward suddenly it can now affect your body everywhere.

‘There’s a huge post-viral syndrome, damage done in ways we didn’t know. I was sitting with Dr Hilary and he said it’s the lungs, it’s respiratory you’re fearing from COVID.’

Kate also reiterated that doctors had urged her to ‘get on with life’ while Derek continues to recover, insisting she had to be present for their two children Darcey, 14, and Billy, 10.

‘The doctors are saying to me now, ”You’ve got to get on, you’ve got to get on with life”. For Darcey and Billy effectively right now, they’ve lost their dad, they haven’t, he’s there.. he’s not a presence as he should be in their lives.’

Kate’s husband has been in hospital since March, and while Kate sparked hope earlier this month by revealing he has awoken from a coma, the star has been told his recovery could take years.

She told Hello! ‘The doctors have been urging me not to put my life on pause. They’ve told me that I need to go back to work and create a routine in our lives again.

‘The children and Derek are all I’ve thought about and they’re the most important people in my life, but I must create structure and normality for the children, to clean the bath, put the plates in the dishwasher and tidy the house.

‘I also need to get back to work so that I can provide for the children and we can do things together, to make them feel that the light hasn’t gone out of their lives, that there’s hope for the future.’

Kate made her return to GMB on Monday alongside Ben Shephard after taking a break from the show while Derek was hospitalised.

Derek has previously credited Kate for saving him from depression which started during his career as a political advisor and led to a nervous breakdown and a stint in The Priory in the late 1990s.