The Electrical Trades Union has taken aim at the solar industry for its treatment of construction workers, saying the industry's employment and safety practices lag undermine its progressive reputation.

At one massive solar farm under construction in western New South Wales, a union official was taken to the police station after he raised safety issues with wiring, water supply and amenities. 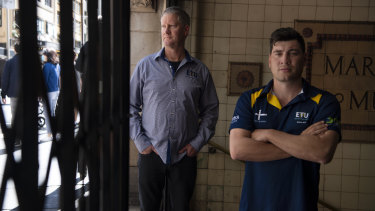 Justin Page, NSW secretary of the Electrical Trades Union, and Nick Bligh, a union official who has been organising workers at the Wellington solar farm.Credit:Louise Kennerley

The union's concerns with the solar industry dovetail with fears elsewhere in Labor that pushing for a rapid take up of renewable energy is a vote-loser in some parts of the country.

ETU organiser Nick Bligh spent last week at the Wellington Solar Farm near Dubbo in western NSW where about 560 workers are rapidly building a solar farm that will power up to 70,000 homes on 316 hectares of farmland.

He found facilities on the site did not have properly safety-tested electrical wiring, disposal of waste water and enough room for workers to store protective equipment. Safe Work NSW, the regulator, agreed, issuing three notices telling the company building the farm, Sterling & Wilson, to improve.

The solar industry requires large workforces to build its farms but each provides very few ongoing jobs. "To give you an example, my family is in coal mining in the Mudgee region, there's no way they're gonna go to renewables because one, its [jobs are] only there for a period of 12 months in the construction phase and then where are you gonna go?" Mr Bligh said.

Australian Bureau of Statistics data showed there were 26,850 full-time equivalent jobs in renewable energy in 2018-19, a record level and up more than a quarter from the previous year but still lower than the number of people working in coal mining.

The ETU sent Mr Bligh to the Wellington site, which is the first in Australia being built by the Indian-based Sterling & Wilson, after reports a bore drilling machine had almost hit high voltage power lines.

After inspecting the site on Monday, September 14, Mr Bligh was denied entry the next day and allowed onto site briefly on Wednesday afternoon. Afterwards, he was taken by a site manager to the Wellington police station against his will when he tried to raise more safety concerns, he said, but later dropped back at the solar farm by police.

Sources close to the company disputed Mr Bligh's version of events, saying he was driven to the station from the site because he stepped outside the bounds allowed by his union permit.

"We ensure all safety measures are taken to protect our employees, customers and business partners and we are committed to the safe delivery of our projects," a company spokesman said.

Large solar farms need cheap land and access to transmission lines to take their power to consumers, so many are built in remote areas. Combined with its short term workforces, which the ETU's NSW state secretary Justin Page said were often hired through contractors and comprised mainly of backpackers, that makes it hard for unions to recruit members or bargain for higher wages.

Australian Workers' Union national secretary Daniel Walton lashed Anthony Albanese's federal opposition this week for "continuing to impotently hedge" on gas and being "suckered" by the extreme left and right on climate policy.

Mr Page said he supported renewables but wanted a proper transition for workers and enough baseload supply to ensure the state's manufacturers can prosper.

"I think [gas] is part of the transition myself," Mr Page said. "But is it the long term future? I think we can be better."

The debate over gas in Labor also led veteran frontbencher Mark Dreyfus to call Hunter MP Mr Fitzgibbon “the idiot for Hunter” at a private meeting on Monday.

"In my experience if Mark Dreyfus is criticising you, you are probably on the right track," Mr Fitzgibbon told 2GB.

Tags: a, fault, Labour, Line, standards
Recent Posts
We and our partners use cookies on this site to improve our service, perform analytics, personalize advertising, measure advertising performance, and remember website preferences.Ok