Pieces are falling into place for the Australia Post chief executive gig.

Former Virgin boss Paul Scurrah is one of four names on the shortlist compiled by headhunters Egon Zehnder. Scurrah didn’t just trick everyone into thinking he had nothing to do with Virgin going broke. He is also pitching his experience running ports business DP World.

He was on the AusPost board for a year in 2018 before quitting, but he might be a bit too Queensland ALP for the government. Former SBS chief executive Michael Ebeid is also in the frame and it’s no secret Communications Minister Paul Fletcher is a big fan. Huge. So adroit was Ebeid at handling Senate estimates hearings that they turned into little more than a love-in about SBS’s Eurovision Song Contest coverage. Senators even posed for photos. Ebeid is also eyeing off the top job at Nine Entertainment Co (owner of this masthead) made vacant by Hugh Marks. Always good to spread your bets.

But will it be enough to compete with the man tipped as most likely?

Step forward Michael Byrne, the recently departed Toll managing director. The federal government appointed him in April to head a $110 million program to kick-start the freight industry after the COVID-19 shutdown. It even gave him the title of co-ordinator-general of the International Freight Assistance Mechanism. The fact he is a former AusPost board member helps his chances too.

The final name is a bit of a mystery, but the optics suggest it has to be a woman. Perhaps the post office’s former international business boss Annette Carey will make an appearance on the list. Carey departed Australia Post in April. Later that month, she was hired to take on the chief executive’s role at Linfox Armaguard, where she remains. Staff have their fingers crossed.

Up, up and away

Now that borders are opening up and there is increasing confidence in dealing with the coronavirus, the states have gone back to doing what they do best: throwing money at corporations in desperate attempts to get them to relocate.

And nothing is more prized at the moment than the Qantas property review. Up for grabs is the location of not just the Qantas and Jetstar corporate headquarters but maintenance facilities and flight training as well.

It has turned into quite the beauty parade. Western Sydney Airport’s bid is regarded as very impressive, in contrast with Sydney Airport, near the airline’s current headquarters in Mascot, which is nowhere.

And so far Queensland, which flung $200 million at Virgin to retain its headquarters, has failed to match Victoria’s enthusiasm on display this week. 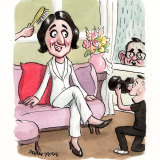 From pork barrels to make-up studios and soft lighting.Credit:John Shakespeare

Joyce will also be meeting governments in Queensland and NSW, where presumably NSW Premier Gladys Berejiklian will be on a high thanks to her forthcoming appearance in Vogue, where she stars in an upmarket listicle on the 20 people who made 2020 and the NSW Premier is in good company alongside primatologist Jane Goodall and introverted comedian Hannah Gadsby.

Meanwhile, South Australian Premier Steven Marshall has attempted to outmanoeuvre his rivals. He sent across a personal video plea. We don’t rate his chances.

Right then, I'm off

There has been a parting of the ways at Melbourne Town Hall. Chief of staff Giulia Baggio has left the employ of lord mayor Sally Capp, and has even made it LinkedIn official.

The former ABC journalist, who has previously worked for the ACTU, the Climate Institute and Mark Dreyfus, split just after Capp’s election victory was declared. What extremely odd timing. CBD hopes there wasn’t a row.

Apparently not, as Capp has sent Baggio off with gushing praise. "I’m sad to say farewell to my Chief of Staff Giulia Baggio who has been by my side the whole way and led the Lord Mayor’s Office with great dedication and loyalty,” she said.

Who says politicians aren’t down to earth? The Parliament Friends of Soil are having an end-of-year bash. The Canberra friendship group was set up to promote awareness of soil health around the country. It is headed jointly by Nationals leader Michael McCormack and Labor MP Linda Burney and this year will mark the end of the year with a World Soil Day celebration over breakfast next Thursday.

It’s an upscale "do". The event will take place at Old Parliament House’s Hoi Polloi restaurant. And it might be a morning event but there’s a special guest: National Soils Advocate Penelope Wensley, who will deliver a headline address. Wensley, a former governor of Queensland, was appointed to the role in August to succeed former governor-general Michael Jeffery.

Most Viewed in National

Tags: AusPost, For, Looking, stamp, THE
Recent Posts
We and our partners use cookies on this site to improve our service, perform analytics, personalize advertising, measure advertising performance, and remember website preferences.Ok