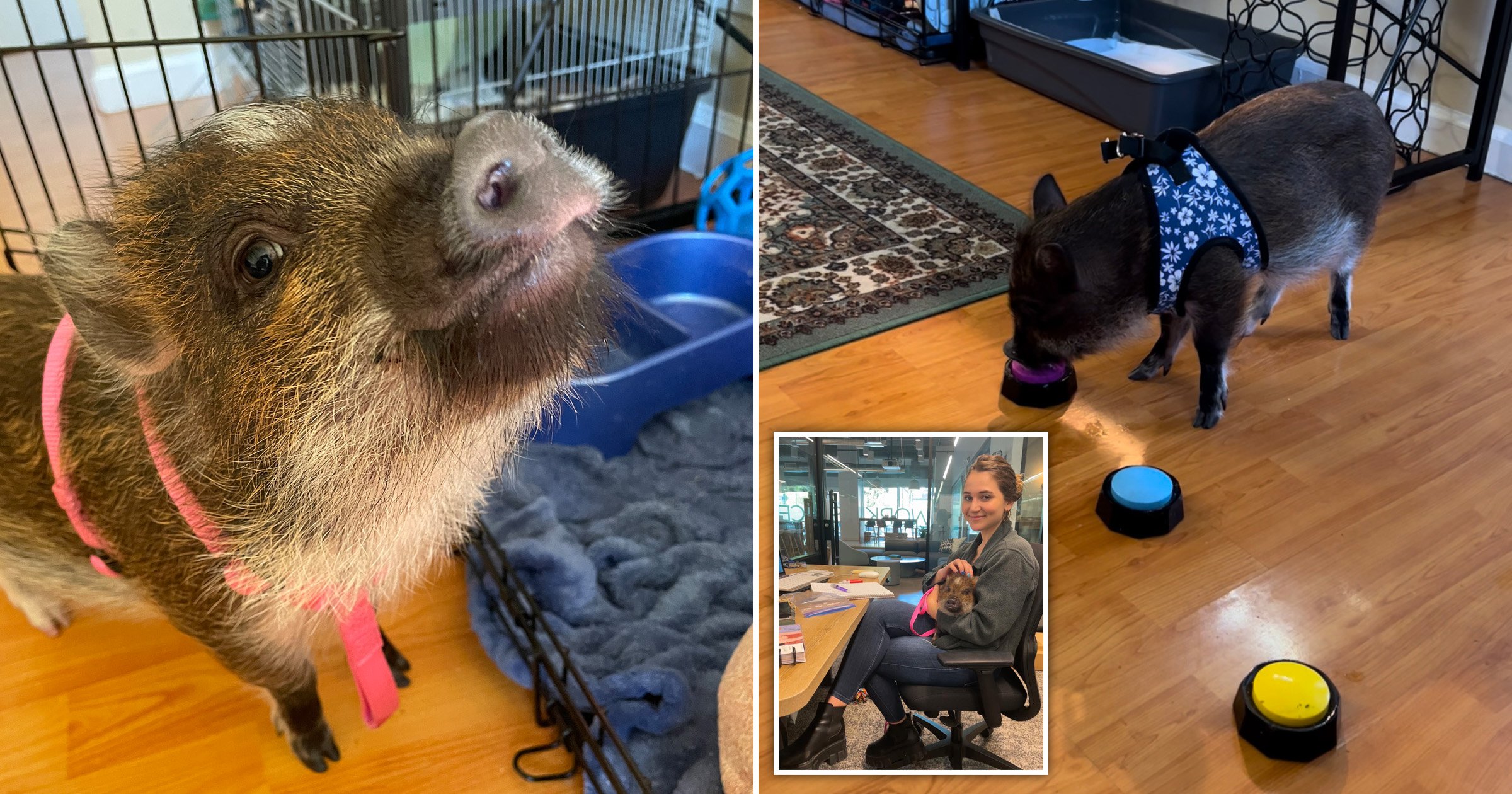 An extremely intelligent pet pig is becoming a TikTok celeb after learning to communicate using buttons.

Fans have hailed the now eight-month-old mini Vietnamese potbelly pig, called Merlin, the ‘world’s smartest pig’ as he is potty trained and can also differentiate between colours.

Mina Alaai, 25, bought Merlin for £350 in March this year and soon after began teaching him how to use a cat’s litter box and how to ask for food and walks.

The social media manager, from San Jose, California, began posting videos of her 25lb pig over on her TikTok account, @mina.alali, and quickly grew in popularity as animal lovers from across the world fell in love with Merlin.

Mina said: ‘Everyone always comments that he is the world’s smartest pig.

‘It’s something I never expected, but he has learned everything so quickly.

‘I just wanted him to have good manners and be house-trained, but it’s been so surprising just how clever he is.

‘Merlin is the most intelligent, adorable, dramatic and stubborn little pig.’

Mina, a self-proclaimed animal lover, welcomed Merlin into her home, where he quickly became best friends with her two rats, Millie and Miracle, both aged one, and her bearded dragon Mochi, who sadly passed away last month.

Mina had dreamed of owning a pet pig since she was little, and those dreams became a reality earlier this year.

She had been putting off adopting a pig for years, but after seeing a video of a hog online, she decided she was financially ready to take the leap.

‘I have always wanted a pig,’ she said. ‘The way people react when they see cute dogs is how I have always felt about pigs.

‘As a kid, I used to go to the petting zoo just to see the pigs.

‘They are so smart and so cute, and I knew I would adopt one day.’

Mina fell in love with Merlin the second she laid eyes on him and brought him back home, where she had treats, toys, and a bed waiting for him.

‘He was a little bigger and older than all the other pigs, and he had been there the longest. So I decided to take him home,’ Mina added.

Merlin immediately felt at home in his new surroundings

The extremely smart pig soon learned how to sit on command, and while he knows how to use a litter box, he prefers to go out for walks on his leash.

Mina has also been teaching Merlin his colours. Her most recent video shows her calling for Merlin to walk to different green-coloured items – which he does without hesitation.

‘He was incredibly easy to train. Any new trick never took more than a day,’ Mina said.

In order to train Merlin to talk and communicate, Mina bought some buttons online that can be programmed with pre-recorded sounds and messages.

Each button is differently coloured and has a different message to allow Merlin to communicate his needs and desires with Mina.

These include asking for food or water, for a walk and even for her to sing and dance with him.

Mina motivated Merlin to learn each new trick with lots of treats and kisses after he successfully completed one.

Mina added: ‘If he did something, I would just repeat the words over and over again.

‘He has a button where he clicks it when he’s hungry. Or when he’s thirsty, and if he presses outside, we’ll go outside.

‘He knows music and dance, so I will start singing or pick him up and twirl.’

Merlin often gets confused for a dog when they are out on walks – that is until they hear him ‘oinking’- because he loves playing with other animals, running about and wagging his tail.

‘For the first week, I felt like a famous person because everyone was stopping me for pictures or to pet him,’ Mina said.

‘He’s very social, and he loves being a pet.’

Merlin also loves playing with his rat siblings and often carries them on his back for tours around their house.

‘Merlin is very gentle with the rats, so when I bring them out for playtime, he will take them on piggybacks,’ Mina explained.

‘I’m confident he would be good friends with any animals. I want to get a dog one day, and I think they’ll warm up to each other and become besties.’

Mina’s videos showing off their adventures have amassed hundreds of millions of views across TikTok and Instagram, with viewers writing to Mina to say they have given up bacon after watching videos of Merlin.

Mina had previously shared videos of her bearded dragon Mochi, who she also trained, which inspired her to train Merlin when she first adopted him.

Most recently, Mina got a tattoo to honour the late Mochi.

She added: ‘I just want to make the cutest and most wholesome videos I can.’

You can see more of Merlin’s life with Mina on Instagram @merlinthepig or on TikTok @mina.alali 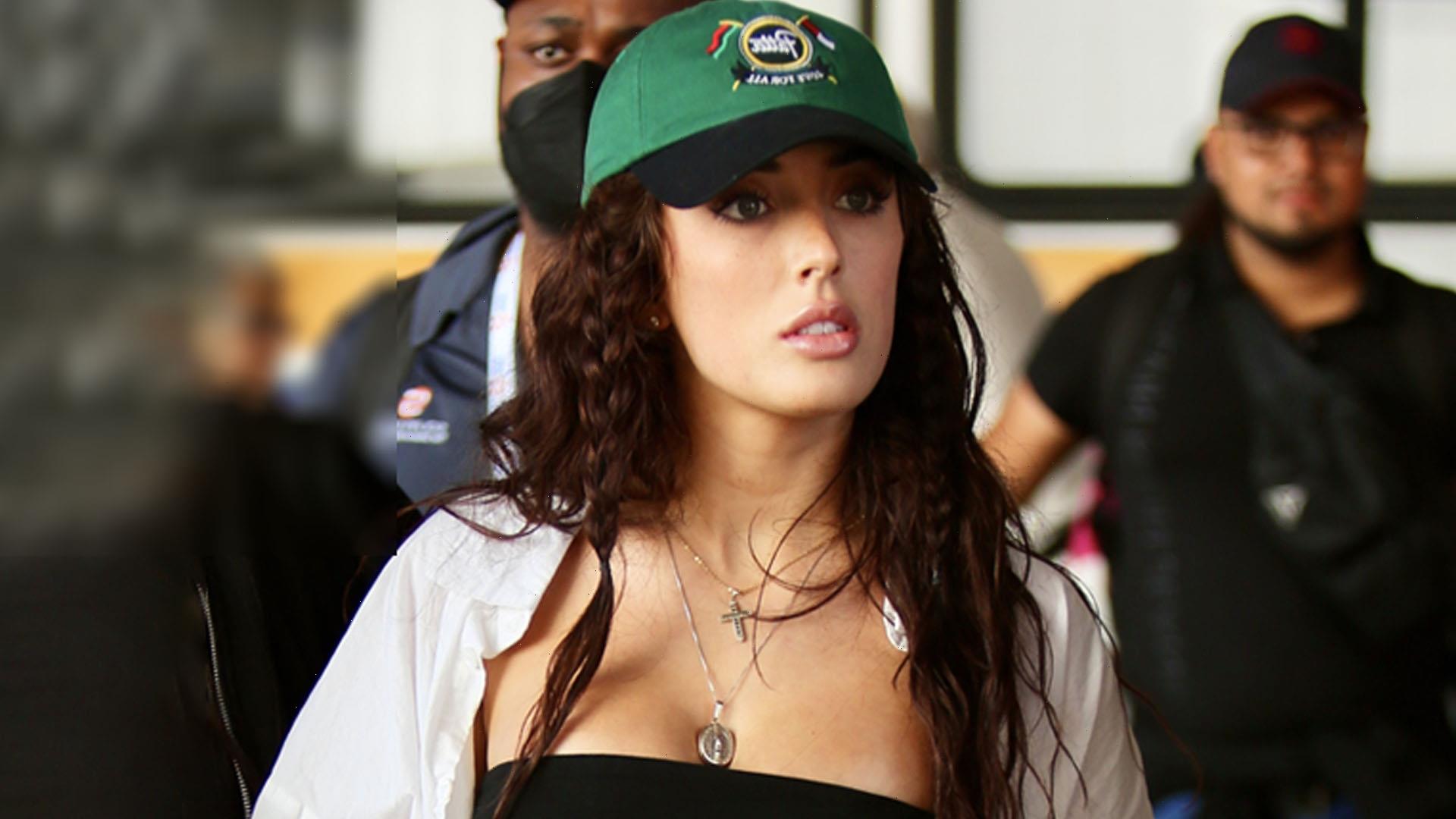 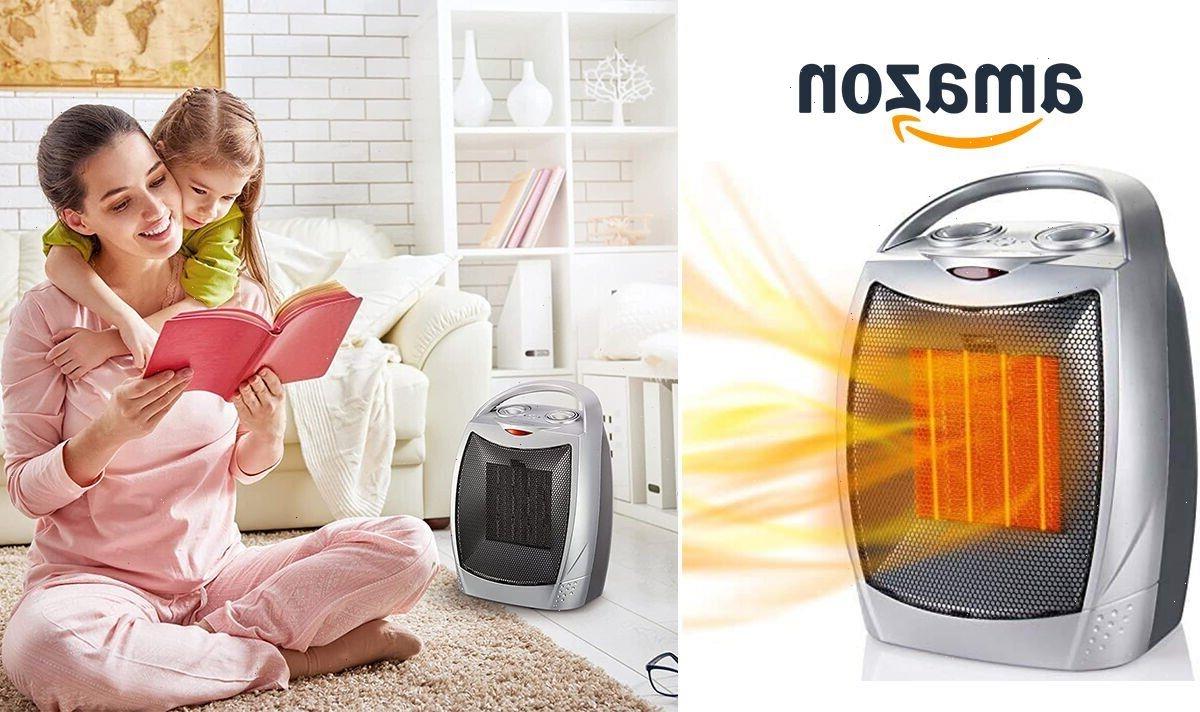