Home-building hotspots in Melbourne’s outer suburbs accounted for the bulk of Victoria’s 72,000 rooftop solar installations last year as a record 362,734 systems were hooked up around the country.

CSIRO senior experimental scientist Michael Ambrose, who leads a team tracking rooftop solar installations, said installations were concentrated in about five Melbourne postcodes while in Sydney they were evenly spread. 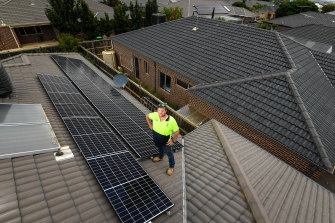 “In NSW, we don’t see that nexus between where homes are built and where photovoltaics [rooftop solar panels] are installed – which is a bit surprising,” Mr Ambrose said. “In Victoria, it’s really dominated by about five postcodes that take up the vast majority of installations.”

The top postcode in Victoria was 3977 – including Cranbourne and Sandhurst south-east of Melbourne’s CBD – which recorded 2036 solar installations last year. The next highest installations were in postcodes 3064 to the city’s north, 3029 to the west, 3030 to the south-west and 3978 to the south-east.

The CSIRO compiled its data based on installations under the Small-scale Renewable Energy Scheme and construction data.

Mr Ambrose said construction data showed new housing in Victoria was dominated by free-standing dwellings while NSW had a mix of homes and apartment buildings, which would skew the figures towards new-home installations in Victoria.

Rooftop solar installations nationwide rose 28 per cent in 2020 from 2019. Mr Ambrose said 2021 could potentially deliver another record-breaking year, based on early data.

Australia has the highest take-up of solar globally, generating eight times the global average volume of rooftop solar power per person. Data from the Commonwealth’s Clean Energy Regulator shows 2.7 million rooftop solar power systems had been installed in Australia by the end of 2020, which means about one in four homes have rooftop solar panels.

Regulators require new homes to achieve at least a six-star energy efficiency rating and “that gets pushed as the maximum benchmark by the building industry”, Mr Ambrose said.

But he said seven or eight-star systems could be quite affordable, suggesting consumers choose reputable installation companies and investigate options beyond those put forward by their building contractor.

“There are a lot of cheap panels and inverters, it’s a case of you get what you pay for,” he said.

The federal Energy Department forecasts rooftop solar power could eclipse coal in a decade. It is forecast to generate 32 gigawatts by 2030, compared to coal’s current 25 gigawatts, which is projected to shrink to 19 gigawatts over the next decade.

The transition towards renewable energy poses a growing challenge to grid operators, which have to balance the intermittent supply of solar and wind with baseload output from coal and gas plants to maintain reliability and stability. The network needs to have sufficient dispatchable power in reserve from energy sources such as gas, hydro and batteries to balance out periods when there is a natural lull in solar and wind generation.