Edith Cowan’s drive for equality in her short but significant parliamentary career culminated with a successful private member’s bill that lifted the barriers for women entering the legal profession.

During the debate for what became the Women’s Legal Status Act of 1923, fellow MP Charles Latham interjected: “Surely you do not want to bring women down to the level of men?” 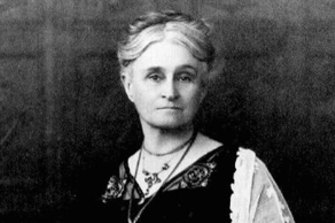 At the age of 59, Edith Cowan became the first woman to be elected to an Australian parliament – the legislative assembly in Western Australia.

Cowan replied: “No, I want to raise men to the level of women.”

“Women are very desirous of their being placed on absolutely equal terms with men,” she said. “We ask for neither more nor less than that.”

Cowan is nowadays perhaps better known to the great unwashed as the woman who graces the $50 note. But a century ago today, at the age of 59, she became the first woman to be elected to an Australian parliament – the legislative assembly in Western Australia.

Her election platform included such measures as child endowment payments to mothers and day nurseries for working women. Cowan’s surprise victory, as an endorsed candidate for the Nationalists – the conservative party of the day – was by just 46 votes.

“In so many ways, Edith Cowan changed the game for women in politics,” Conrad Liveris, a labour market economist, said. “She opened the door to the hundreds of women who have followed her. We have a moment in time today to reflect about what women have contributed to parliament but also what is next.”

While there are more women in Federal Parliament today than ever before, the culture has come under sharp scrutiny in the past month after former staffer Brittany Higgins alleged she was raped by a colleague in a ministerial office in 2019. Sex Discrimination Commissioner Kate Jenkins was appointed last week to lead a review of workplace culture at Parliament House.

Federal Minister for Women Marise Payne used a recent International Women’s Day event to say the culture “must change” and parliamentarians needed to “own the problems, own the failings, and make the necessary changes ourselves”.

Australia was one of the first countries in the world to give full political rights to women but one of the last Western countries to elect women to its Federal Parliament.

Between 1903 and 1943, only 26 women nominated for election for either house. No woman was endorsed by a major party as a candidate for the Senate before the beginning of the Second World War. As of September 2020, there are 46 women in the House of Representatives and 39 of the 76 senators are women.

To mark the centenary of Australia’s first female MP’s election, Liveris has launched In Her Seat – a non-partisan, national, volunteer passion project to honour Cowan and the women who have followed.

Anne Aly, the first Muslim woman to be elected to Federal Parliament, holds the Perth-based seat named in Cowan’s honour.

“To me, gender equality means that women and men not only have equal opportunities but that the structures that currently exist preventing women from achieving in leadership roles are dismantled to ensure that there is also an equal focus on equality of outcomes,” she told In Her Seat.

“Until all women can participate equally at all levels of political, economic and social life, we have not achieved gender equality.”

Jane Hume, the federal Minister for Superannuation, Financial Services and the Digital Economy, says great government, policy and politics depend on women being at the table.

“We have come a long way, but there is still much more to be done,” says Hume, who lists Dame Margaret Guilfoyle – the first woman with a portfolio in a federal cabinet – as her inspiration.

“Collectively, we have a responsibility to break down barriers which prevent women taking the plunge into politics, and encourage more to put their hand up. I will always reach down and offer my hand to the women who will come after, as was done to me.”

But Hume remains an optimist, pointing to the record number of women in federal politics.

“It has never been a better time to be a woman, whether you’re in politics or out,” she says. “So long as we avoid complacency and continue to level the playing field, it will only improve.”

As a member of the education board before entering politics, Cowan advocated for state schooling and the inclusion of sex education in the curriculum.

“She was known for her severe pragmatism, her skill, intellect, tact, untiring energy and indomitable courage,” Wright, a professor of history at La Trobe University, writes in Cowen’s entry into the Australian Women and Leadership Encyclopaedia.

“It is poignant that the woman who most successfully pioneered women’s political representation in Australia carried a demeanour so unlike the modern woman dancing across the public imagination on the cinema screens of the 1920s: loose, carefree, uninhibited, liberated. Cowan’s face never showed a glimmer of lightness or humour. She remained reserved, stern and stoic, and even her own five children found her cold and aloof.”

Greens senator Larissa Waters, first elected in 2011, lays claim to being the first federal MP to breastfeed in parliament.

She hopes normalising women with families in positions of power is something to which she has contributed.

“We need not just more women in politics, but more women of colour, women from different backgrounds, and young women, so parliament starts to look like the community,” Waters says. “To make politics a more attractive career path for women, we need to challenge the unfair stereotypes, expectations and judgements that we place on women.”

Tags: Be, Done, Edith, More, Much, to
Recent Posts