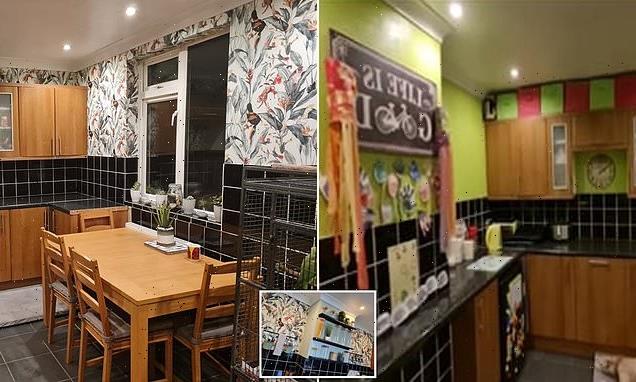 Mum transforms her unsightly bright green kitchen for just £80 in one DAY by putting up wallpaper herself and using bargain items from IKEA, B&M and Facebook

A mum who was tired of her bright green kitchen has revealed how she transformed it for just £80 in one day using bargains from Facebook Marketplace, IKEA and B&M.

Sarah Ellis, 32, from Leigh, Lancashire, was inspired to redecorate her kitchen after seeing other people do their own DIY projects during the pandemic.

Time was of the essence for the mother-of-one, who spends all her time working as a caregiver, and she managed to complete the project in just one day. 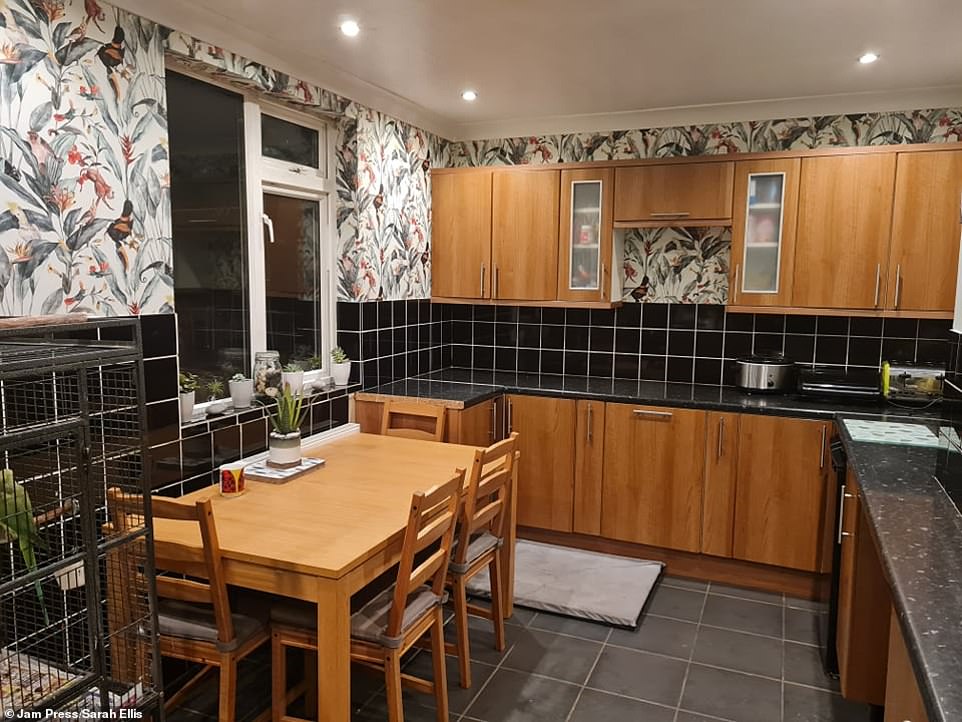 Sarah Ellis, 32, from Leigh, Lancashire, was inspired to redecorate her kitchen after seeing other people do their own DIY projects during the pandemic and completed the makeover in just one day, for £80 (pictured now) 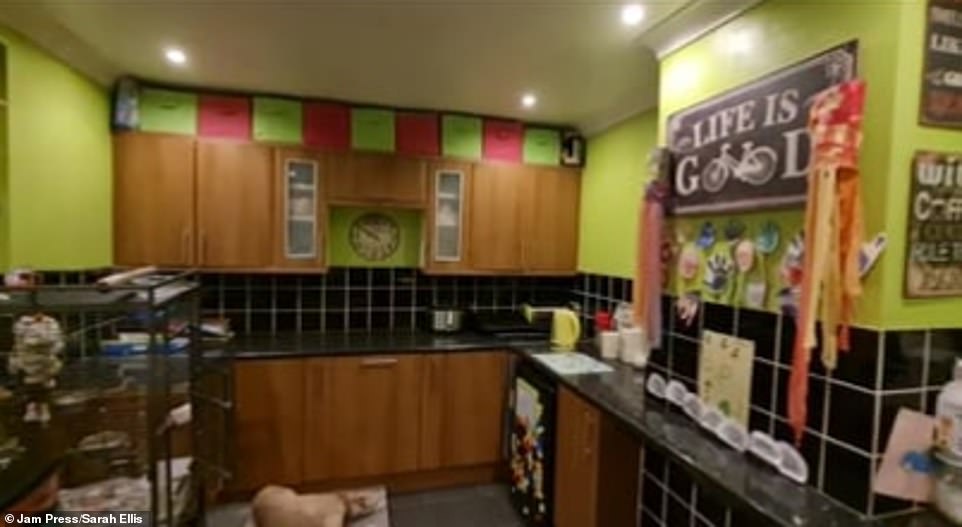 The mother-of-one explained she used to work as a childminder, and didn’t mind her bright kitchen then, pictured before

‘Prior to lockdown I worked part-time as a childminder so the bright and colourful kitchen suited that job, but when the pandemic hit I had to stop,’ Sarah said.

‘Amazingly, the other place where I worked as a caregiver took me on full-time but as a frontline worker, I didn’t have a moment to spare.

‘I haven’t had a chance to update my house from “childminder” and it was really stressing me out. I just wanted my house to be somewhere I could relax.’

Sarah, who lives with husband Glyn, 36, and their son, also called Glyn, six, decided to take matters into her own hands and started decorating on Saturday 2 October. 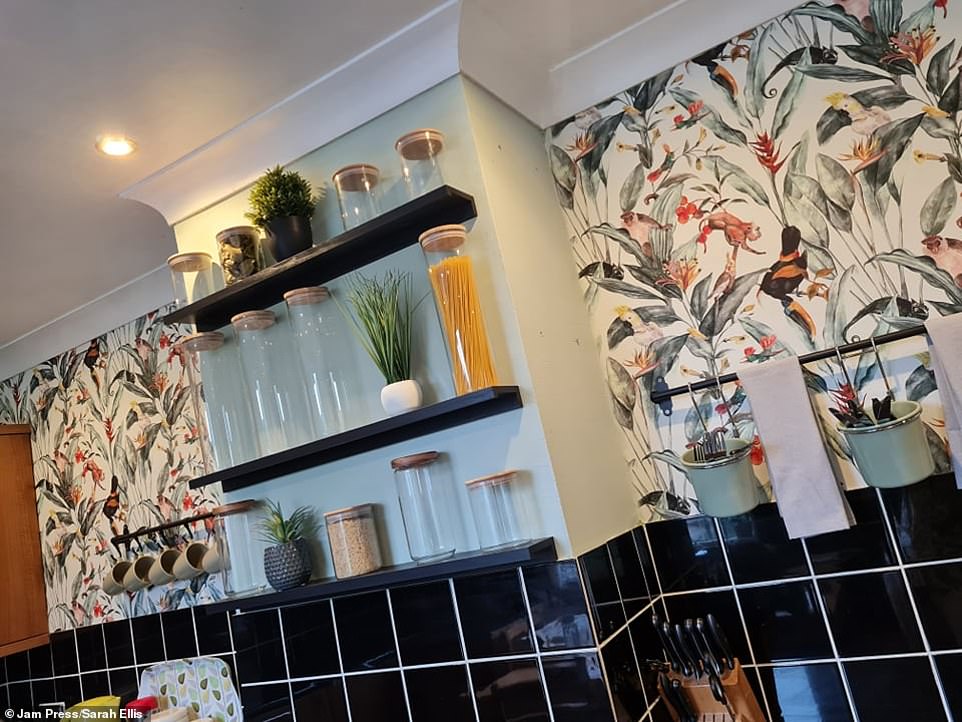 She said: ‘I already had the wallpaper, which I bought from Facebook Marketplace for £15, and began working at 11am.

‘I had to take a break from about 4pm to 7pm to eat, feed Glyn and have a well-deserved cup of tea, but then carried on working until 2 am.

‘All the papering was done by 9pm but I had to sort out the room and paint the wall so it was pretty late by the time I went to bed. 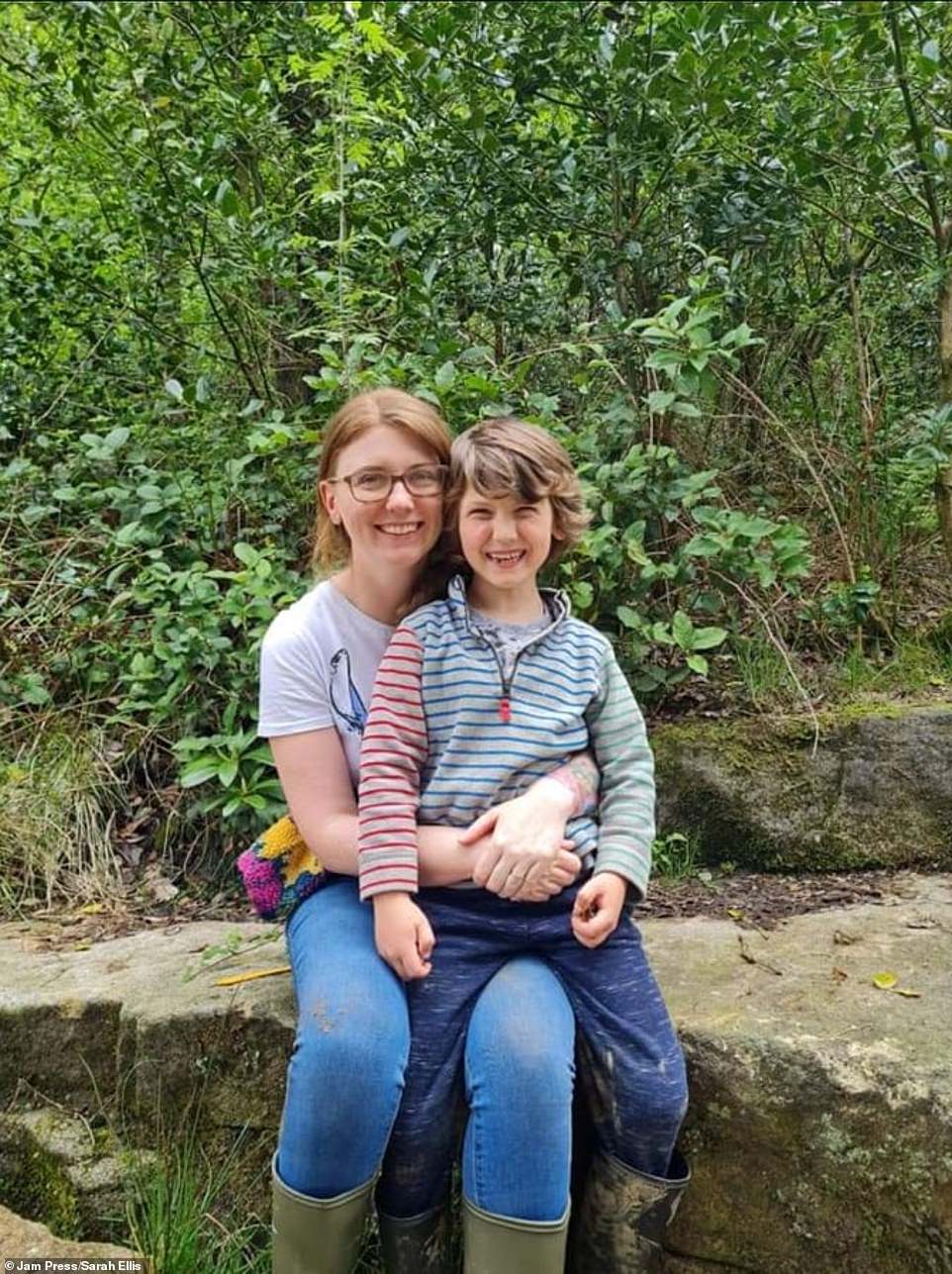 Sarah is the proud mother of Glyn, six, pictured, who now does his homework in the kitchen, where the family hang out most of the time

‘The next day I did rope my husband into putting up a few shelves for me but I did all the wallpapering myself.

‘There wasn’t a straight wall in the kitchen and with two windows, two-door frames and a chimney breast to go around I was almost ready to give up.’

Although she had some experience with wallpapering, she admits that the kitchen was a massive challenge. 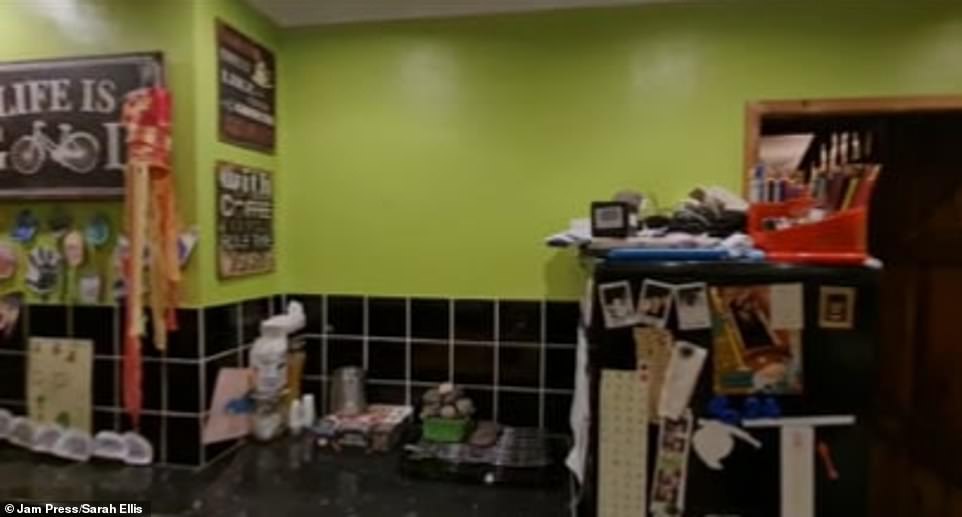 The DIY whiz wanted to get rid of the bright green painted walls in her kitchen, pictured, but had little time to do so, due to her demanding job as a caregiver 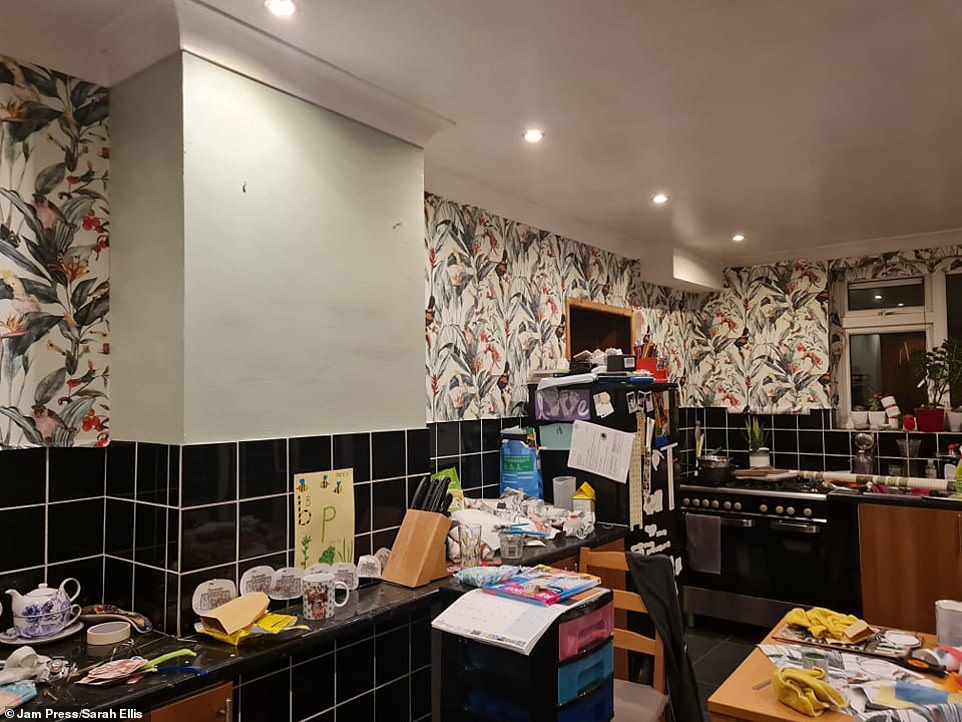 Sarah put up the wallpaper herself, which she said was a challenge, because there was not a straight wall in the room (pictured) 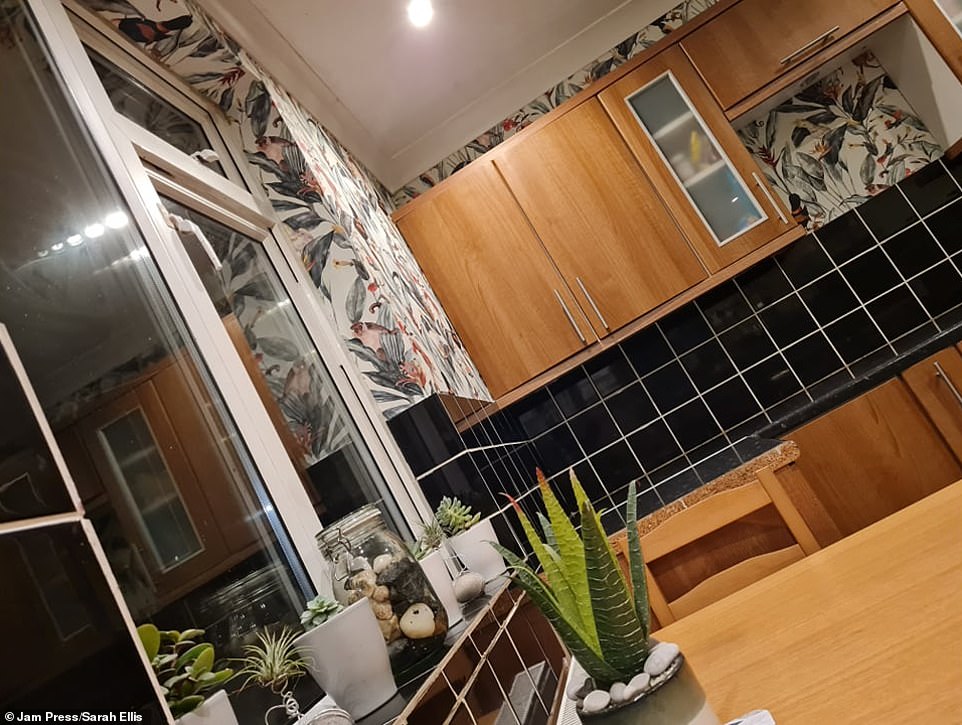 The mother-of-one picked all her accessories and décor from bargain shops and online. All the plants, pictured, came from other rooms to create a botanical feel 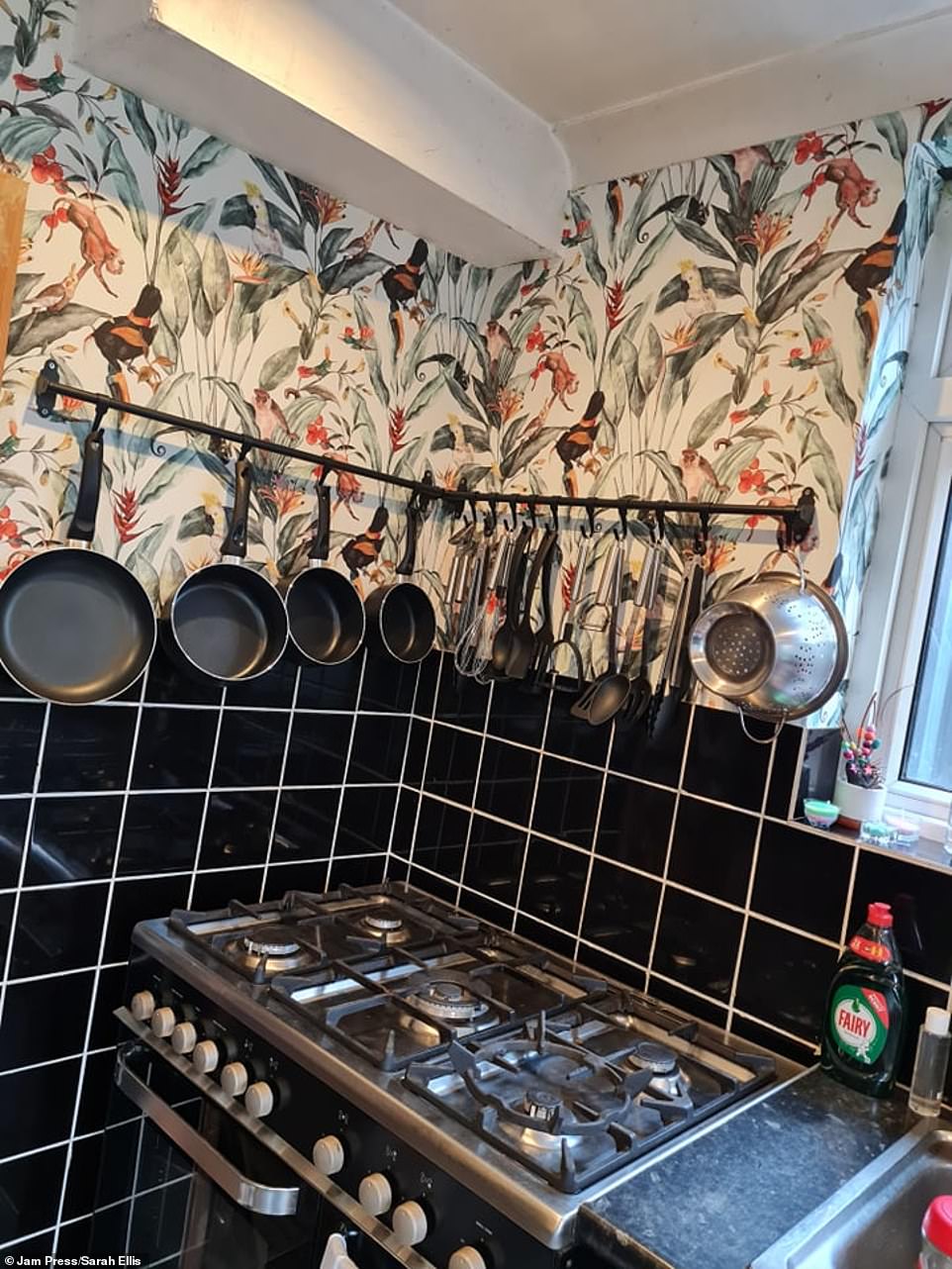 Sarah and her husband Glyn installed rails from IKEA to hang their cooking equipment on to maximise their space in the stove’s corner,  pictured 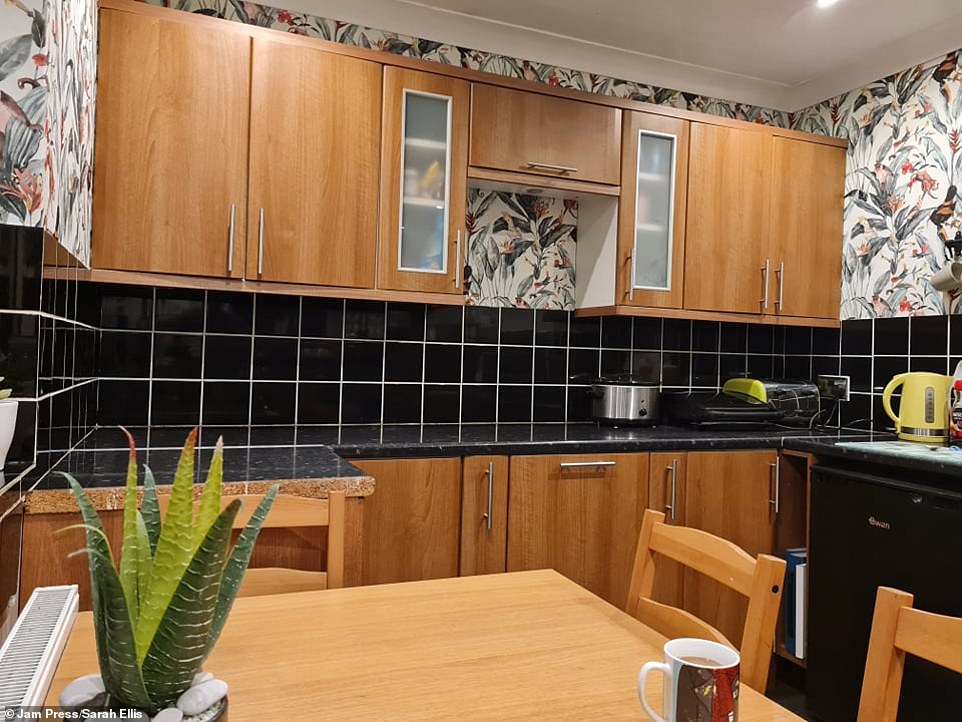 Sarah snatched her new kitchen table, pictured, for free on Facebook Marketplace, and bought the rest of the item cheaply from budget retailers

Total cost of the kitchen makeover

4 x pack of storage hangers for the rails from IKEA, £16

All the accessories such as plants were taken from other rooms, FREE

She said: ‘I’d done wallpapering before but never that size or those fiddly angles.

‘It was actually a nightmare and I don’t want to do it again but I’m glad I did.’

Next she, put up the rails and hooks bought from IKEA to give the kitchen more storage, and added some shelves and picture rails.

Sarah estimates that in total she’s spent around £80 updating the kitchen and is delighted with the results, especially as it’s now where the family mostly hang out and little Glyn does his school work.

She said: ‘It sounds silly but it has actually made a huge difference to my mental health having a room I love.

‘We spend most of our time in the kitchen when we are at home and as Glyn is home-schooled it’s the perfect place to teach.’

Since sharing the end results on Facebook, Sarah was inundated with compliments from followers and over 400 likes.

A third said: ‘That looks amazing! What a difference.’

Someone else wrote: ‘Looks beautiful & so much bigger too.’ 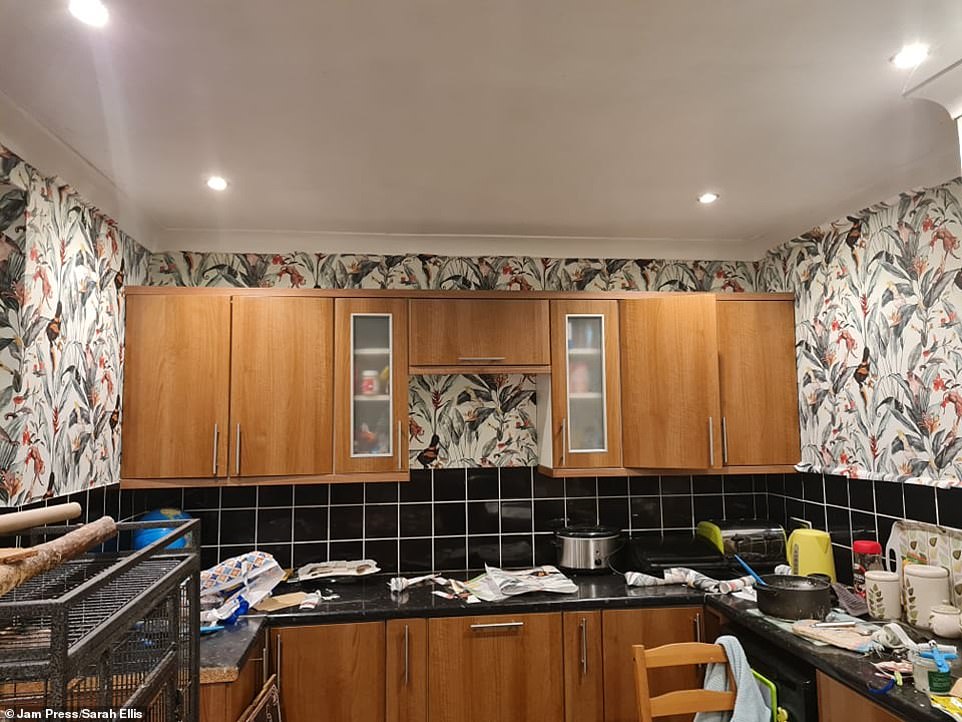 Work in progress! Sarah did all the wallpaper herself and said she’d tried it before, but didn’t have the experience with tricky angles and was ‘ready to give up’ at one point 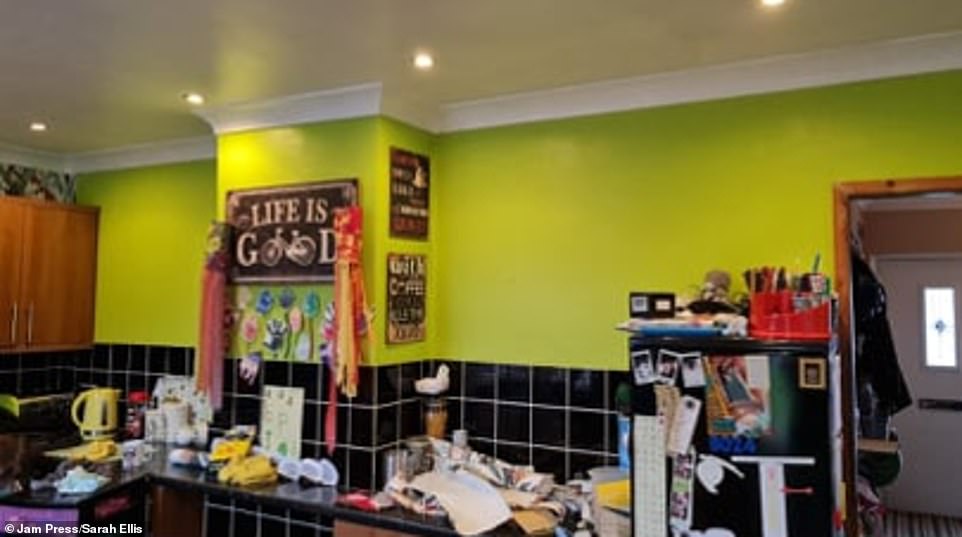 Sarah admitted applying the wallpaper to cover her green walls, pictured before, has been very fiddly because of the chimney breast 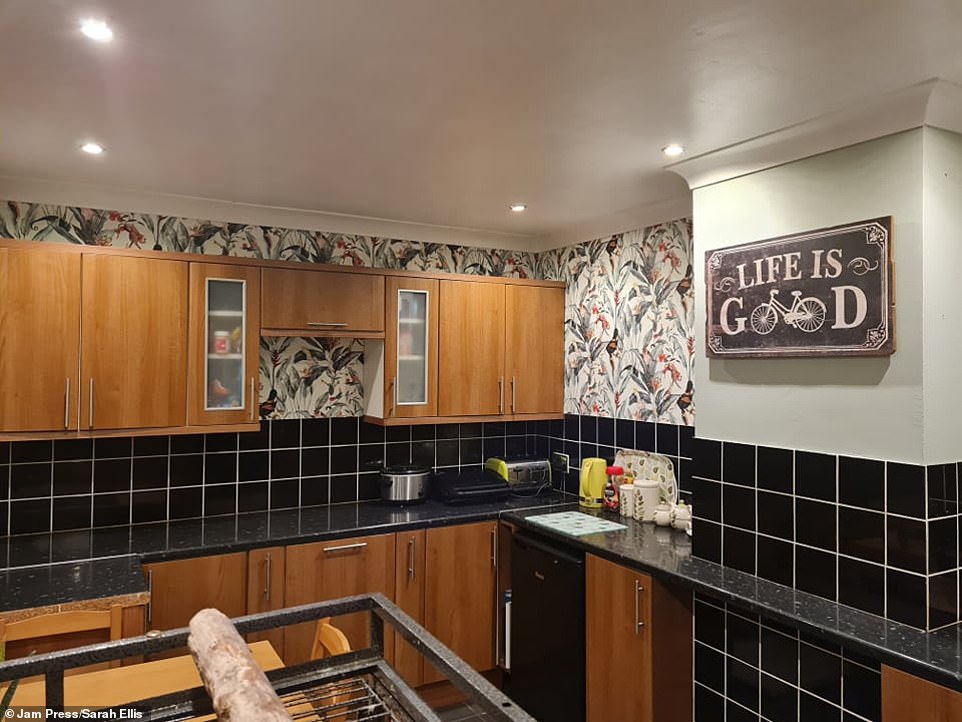 Sarah, wanted to transform her kitchen, pictured after, so that her house could be a place where she could relax 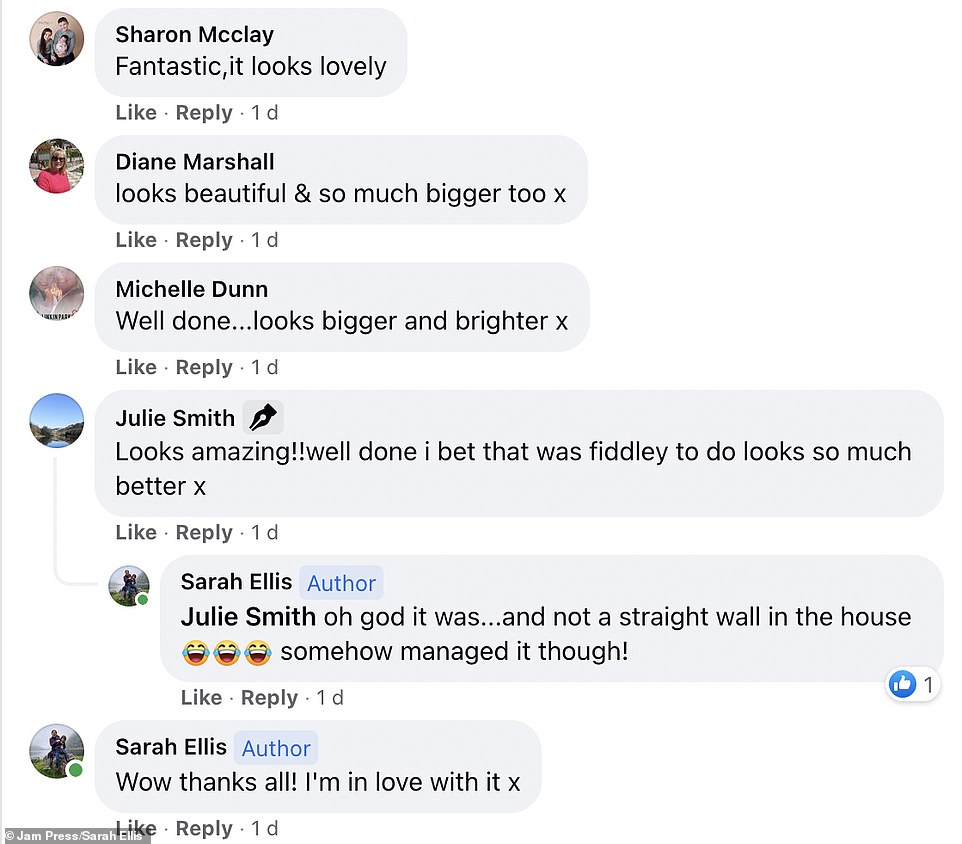 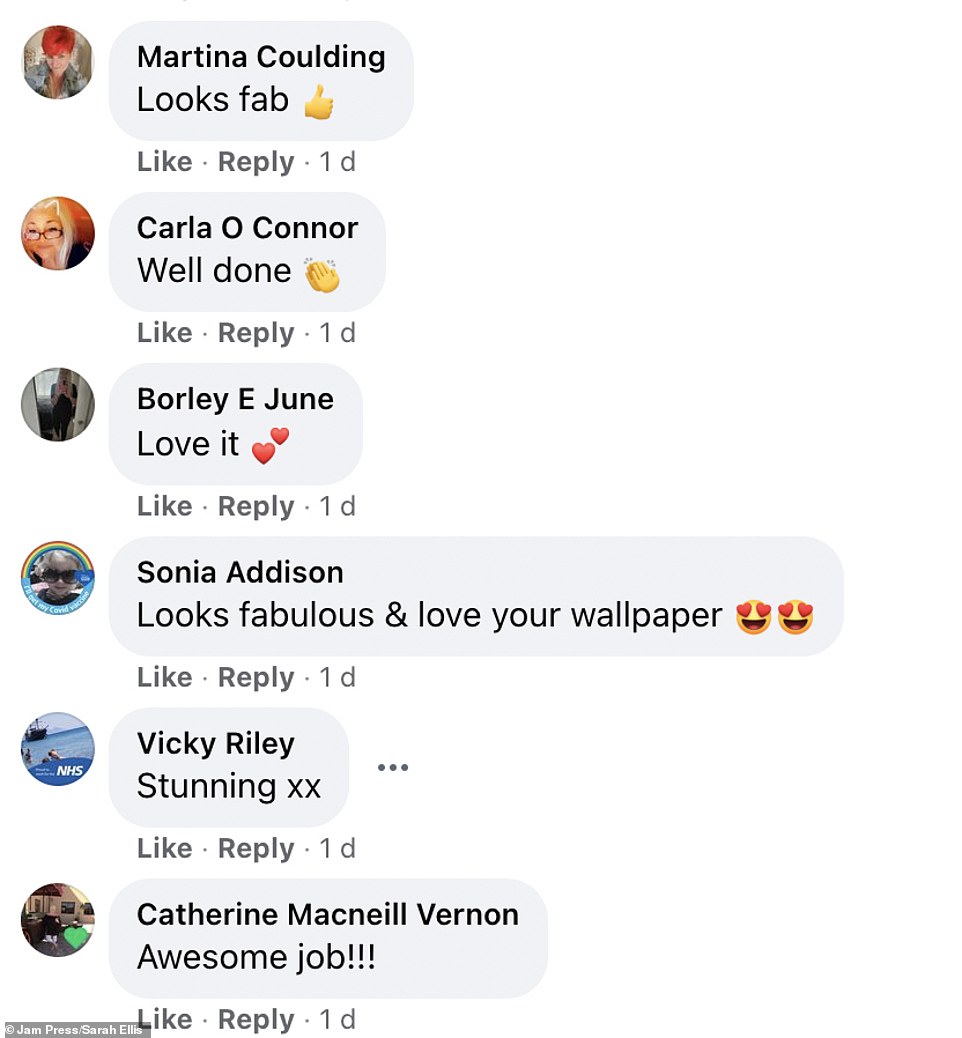 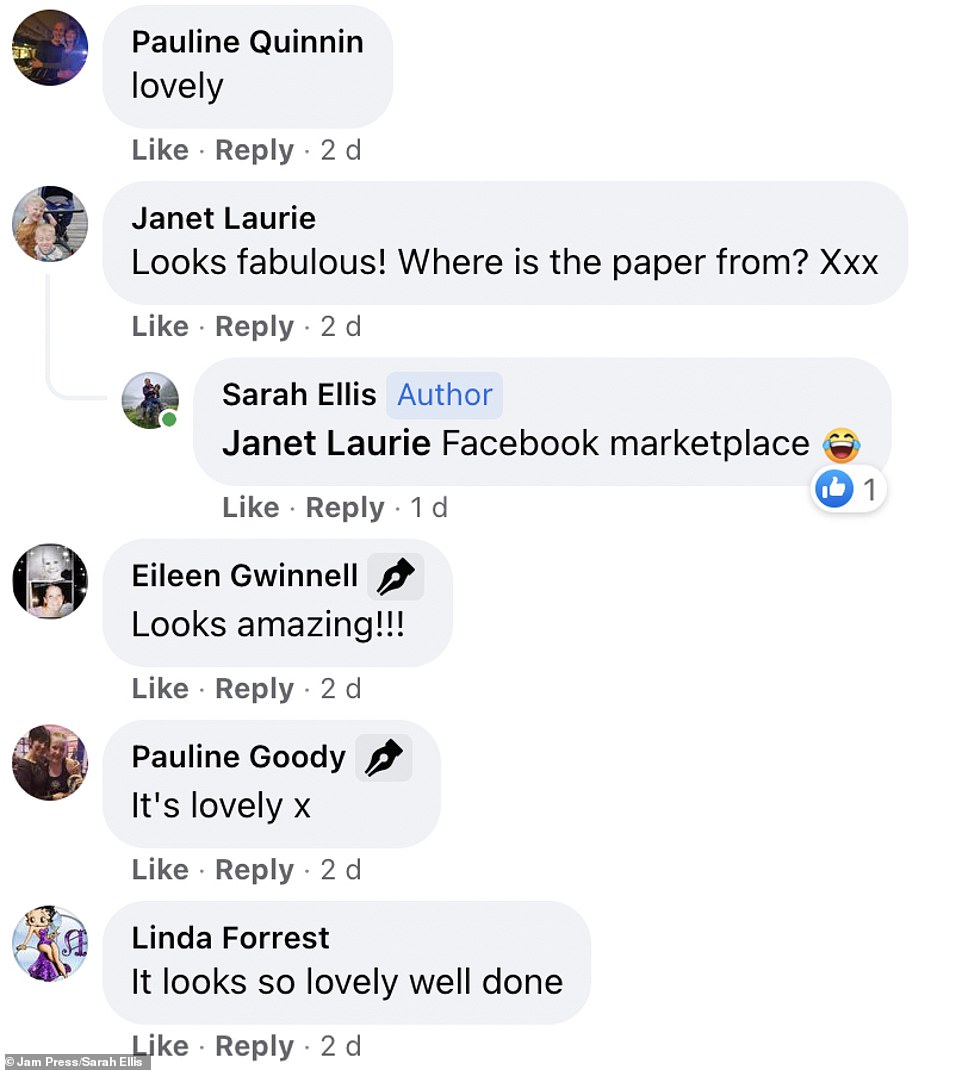 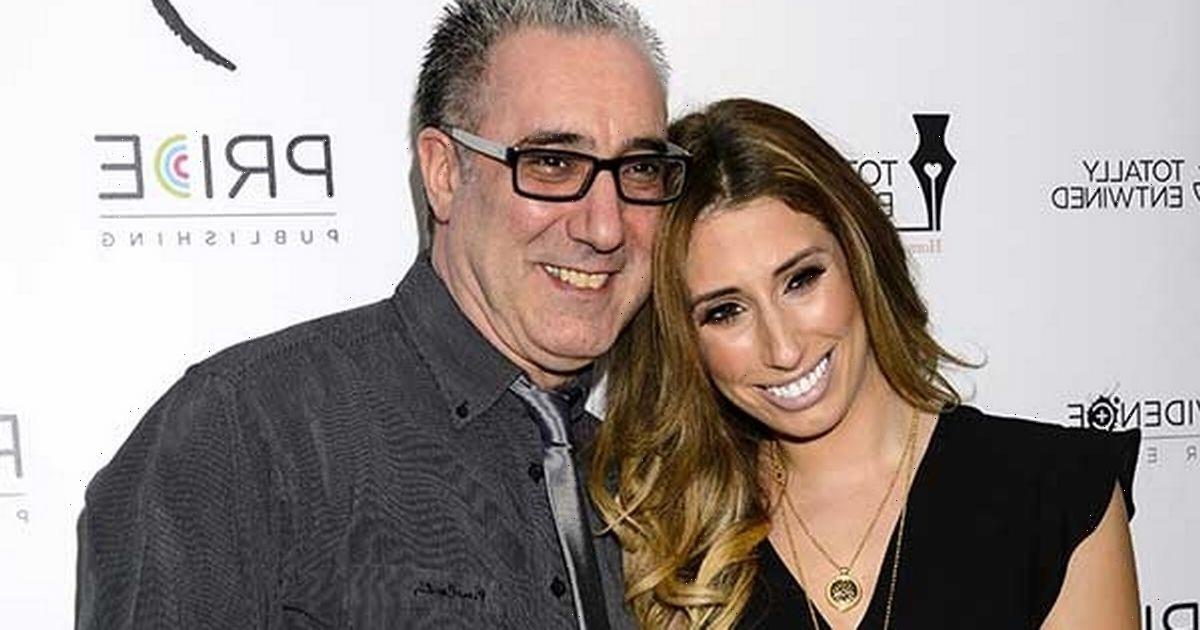 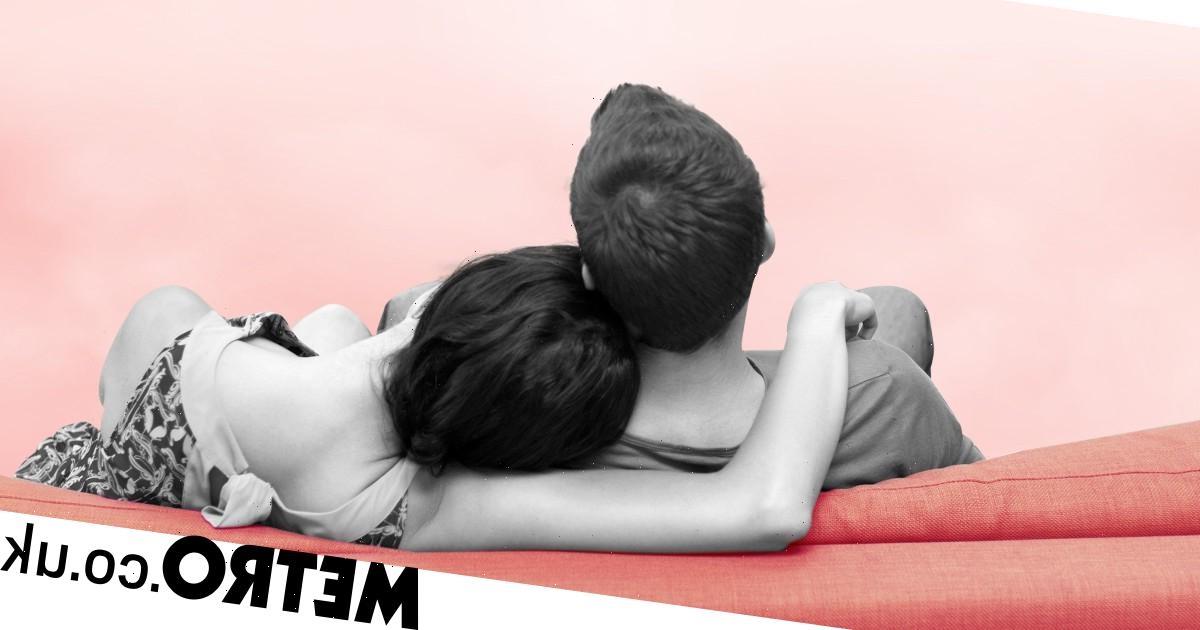