When Australian Robert Floyd began his career as a biological scientist, he had no aspirations of heading a United Nations body charged with policing the world for any signs of nuclear tests. He did not foresee a life of negotiating with the world’s major powers to ban all testing of nuclear weapons.

But that is exactly what is in store for him after last week being elected as the first Australian executive secretary of the Comprehensive Nuclear-Test-Ban Treaty Organisation. 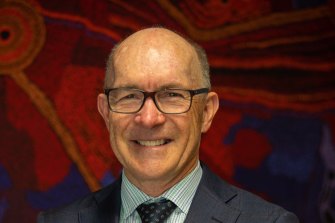 Australian Robert Floyd will begin his role heading the UN body in August.

Floyd has his work cut out for him. The world is about to enter a new age of great power competition – particularly between the United States and China – making it even more difficult to convince states to rid themselves of weapons of mass destruction.

Floyd says his election to the role is a good reminder to never let your dreams and aspirations be the ceiling for what you want to do in life.

“It wasn’t in my wildest dreams,” Floyd, 63, tells The Sydney Morning Herald and The Age.

“For me it’s one of the wonders of life. I started out wanting to be a biological scientist and had a vision as to what that might look like. I wanted to work with CSIRO and I did.

It wasn’t an easy task. The Canberra-based Floyd headed to Vienna, where the UN body is headquartered, in August last year to campaign for his candidacy. After a first round of voting last year he secured 91 votes, just one vote short of the two-thirds majority he needed. With the other contender – incumbent Lassina Zerbo, who was running for an unprecedented third term – refusing to pull out, the voting process had to start again. After finally securing victory last week, Floyd travelled back to Australia and is now in quarantine.

He will take up his position in Vienna in August, after 10 years as the Director-General of the Australian Safeguards and Non-Proliferation Office, which implements Australia’s treaty obligations on weapons of mass destruction. Before that, he headed the Department of Prime Minister and Cabinet’s science and technology unit for counter-terrorism and was in charge of all security-related research at CSIRO.

The CTBTO is the organisation charged with policing the Comprehensive Nuclear-Test-Ban Treaty, which was adopted by the United Nations General Assembly in 1996 and seeks to ban all nuclear tests.

But the treaty is not legally binding because eight nuclear-armed countries have held off on ratifying it: the US, China, North Korea, India, Pakistan, Iran, Israel and Egypt.

Floyd concedes it is unlikely that he will convince all eight countries to ratify the treaty, but he is going to try to get some of them across the line before his four-year term is up.

“If you think about India and Pakistan, or US and China, none of them are going to move unless the other one moves. Or even Iran and Israel. So you have lots of dependencies there,” he says. “It’s a very tricky dance to see the circumstances to be such that a number of these would start to ratify the treaty. But it’s an opening conversation that I want to be continuing with those various states.”

But convincing nations to comply with the treaty is not the only job of the organisation.

The CTBTO has an arsenal of more than 300 monitoring stations that can pick up seismic vibrations or radioactive particles in the air, ocean or atmosphere. Floyd says this allows it to detect a nuclear explosion “anywhere, anytime”.

“That network produces data that no country can have by themselves. So everyone sees value in the treaty,” he says.

“I think that’s one of the reasons why a treaty that is 25 years old and not yet entered into force has got really strong support – because there’s value in it for every country.

“The interesting thing is that although it’s not legally binding, many of the great powers have agreed to a self-imposed moratorium on testing.

“So the only breach to nuclear testing in recent times has been North Korea. None of the others have been doing nuclear explosions for weapons development.”

Floyd says it was important to note that the Pacific – including Australia, French Polynesia and Marshall Islands – has been the site of various nuclear tests in the past. “And to me it’s a solemn honour to be the first head of the CTBTO coming from this part of the world.”

Nuclear disarmament is a complex field, and there are no easy answers. Many academics and national security experts argue that a world without nuclear weapons would be less stable as they actually act as a deterrent to countries fighting each other because nuclear weapons deter conventional war. In fact, no nuclear state has ever gone to war with another nuclear state.

Asked how he grappled with these questions, Floyd says there are a “variety of views around strategic stability and the role of nuclear weapons”.

“Is the holding of weapons by a few a better and more stable world? I think that we would broadly be much better off if nobody had nuclear weapons, because is there really stability where it’s only a few that are holding these weapons?

“But I know there are scholars and other proponents who hold diverse positions. My desire and goal would be to see a world without nuclear weapons. If that was possible and we were able to move towards that then that would be removing one existential threat to life on this planet.”

Unlike other nuclear treaties, the CTBT is not about nuclear getting states to rid themselves of nuclear weapons; it is focused on convincing them not to test them. In that sense, it very much deals with the world as it is.

Floyd says he always tried to work “in the current reality”, always towards “some visionary outcome”.

“I would prefer to face the challenges in this world and this life with optimism towards making a difference wherever possible for the world to be a better place as a result of my being in it and my efforts, in whatever humble way that may be,” Floyd says.

Our Morning Edition newsletter is a curated guide to the most important and interesting stories, analysis and insights. Get it delivered to your inbox.