Medical experts say Australia’s public hospitals got nothing in the federal budget, despite state health ministers urging the federal government to increase funding for the overrun system.

Ministers from both sides of the political divide have also called on the Commonwealth to fix assessment delays for aged care and the National Disability Insurance Scheme that regularly leave the elderly and people with disabilities stuck in hospitals for too long. 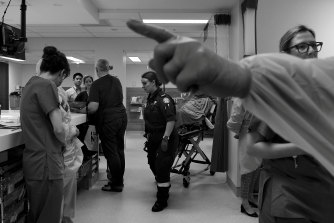 Hospitals around the country are overrun. Experts say the government has not provided enough money in the federal budget for the sector.Credit:Kate Geraghty

“There was nothing in Scott Morrison’s budget for our public hospitals,” he said.

“The Morrison government needs to work with the states and find a solution to the overrun public hospitals.”

Australian Medical Association president Dr Omar Khorshid agreed there was “nothing” in the budget for public hospitals.

“Although, yes, the government is spending 45 per cent of the cost of running public hospitals, and they seem to think that absolves them of any responsibility for how they’re run, every state and territory has public hospitals in crisis,” he said.

“So regardless of whose fault that is, the only solution is a national solution.”

But a Department of Health spokeswoman said figures published in the budget papers showed the Commonwealth was continuing its record investment in the public hospital sector.

Funding for the national health reform agreement and the national partnership on COVID-19 was included in those figures, which showed funding had increased from $13.3 billion in 2012-2013 to a projected $30 billion in 2024-2025.

“This is equivalent to an additional $32.4 billion compared with the previous five years, or growth of 31.4 per cent,” the spokeswoman said.

An Australian government spokeswoman said hospital funding had been increased by $6 billion in this year’s budget over the next four years.

Dr Stephen Duckett, director of the Grattan Institute’s health program and a former federal Department of Health secretary, said the funding amount was less important than what that the money had achieved.

He pointed to examples of patients spending 100 days in hospital due to a lack of space in aged care facilities or care through the National Disability Insurance Scheme as a failure of both the federal and state systems.

“It’s all very well to pump more and more money into the hospitals, but if more and more patients are being kept in hospitals, because they can’t get out because of the inadequacies in those other systems, that’s just wasted money,” he said.

The AMA commissioned research last month which found the federal government could save more than $21 billion over the next four years if it reduced unnecessary hospitalisations and emergency department presentations by improving access to doctors and nurses across the aged care system. The medical body also wants to see the Commonwealth’s share of funding lift from 45 per cent to 50.

West Australian Health Minister Roger Cook raised the issues at the national meeting of health ministers last month. That’s when the states realised they were facing the same crisis.

“They all said they were being completely overrun,” Mr Cook said last week. “We’re quite frankly being smashed.”

Mr Duckett said the government has capped the amount it will inject into public hospitals at 6.5 per cent, no matter the costs or activity.

The public hospital issues will be discussed at the next national cabinet meeting on June 4.

Our Morning Edition newsletter is a curated guide to the most important and interesting stories, analysis and insights. Get it delivered to your inbox.

Tags: ‘Nothing’, budget, For, In, pu, THE
Recent Posts