Premier Gladys Berejiklian has issued a reminder to organisations such as non-government schools that they need to be adhering to their COVID-safe plans after five of the 14 new cases announced on Monday were linked to an independent Catholic school.

Five of the new cases were linked to Tangara School for Girls at Cherrybrook in Sydney's north-west, including four students and a household contact.

In Victoria, 19 people have died of COVID-19 in the past day as the state recorded 322 new cases. It's Australia's deadliest day of the pandemic, taking the national death toll to 314. 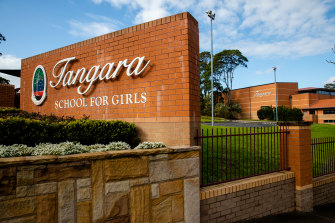 Tangara Girls School in Cherrybrook is closed due to two COVID-19 infections.Credit:Edwina Pickles

On Monday morning, an additional teacher and student at Tangara have tested positive for the virus, and they will be counted in Tuesday's numbers. That brings the cluster size to nine people including six students. The original source of the cluster is unknown.

Tangara's secondary school will be closed until August 24. The junior school campus will reopen on Wednesday for students who cannot learn from home.

The Catholic school, administered by the Opus Dei-run Parents for Education Foundation, is known for having a number of larger families enrolled.

A second student has also tested positive at Our Lady of Mercy College at Parramatta, which is closed for cleaning today. She will also be counted in tomorrow's numbers.

Ms Berejiklian issued a specific reminder to organisations such as non-government schools that they needed to be adhering to their COVID-safe plans.

"Everybody who manages an organisation or managers a non-government school or any other entity that large gatherings or mixing between organisations or between schools, is something which is not allowable under the covered under the COVID rules," she said.

Three cases in today's numbers are linked to the Bankstown funeral cluster, bringing the size of that cluster to 63.

In addition to these school cases, one of the 14 new cases was in a returned traveller, one was acquired in Victoria and one was locally acquired with no links to other cases at this point.

The new cases bring the total number of cases in the state since the start of the pandemic to 3686.

Prime Minister Scott Morrison extended his "sincere condolences to families of 19 Australians in Victoria who have passed away because of the COVID infection".

But the Prime Minister said he had received briefings over the weekend that led him to be "more hopeful than I was" about the improvement in the numbers of cases in Victoria.

Get our Coronavirus Update newsletter for the day’s crucial developments and the numbers you need to know. Sign up to The Sydney Morning Herald’s newsletter here and The Age’s here.

Tags: 14, as, cases, New, NSW, records, Sy
Recent Posts
We and our partners use cookies on this site to improve our service, perform analytics, personalize advertising, measure advertising performance, and remember website preferences.Ok