The cast of ‘Outer Banks’ is back to their foolery, as they’ve returned to North Carolina to film. Chase Stokes teased what’s next for John B and the gang to HL!

Can you believe it has been almost a year since Outer Banks graced our TV screens for us to mindlessly binge at the start of quarantine?! We can’t either! Now, the whole gang is back in North Carolina filming the beloved series, and John B himself reported back to HollywoodLife.com, EXCLUSIVELY, what we can expect from the upcoming season. “I can’t really say a lot. What I can say is that, you know, it is, it’s an incredibly exciting story,” Chase Stokes dished to HL. “Like, if you took season one, it’s sort of like when you have that lover in high school, and you’re like, ‘Oh, I have a crush on her,’ and she goes away for the summer, and she comes back and looks like a completely different person. And you’re like, ‘Wow, that’s awesome’ — that’s how I feel about season two.” Riveting stuff, guys.

“I just think performance wise, everything is nuanced. Everybody did such an incredible job of bringing their A game this year,” he continued. “We’ve had phenomenal people behind the camera who have heightened the visual representation of the show, as well this season. I think personally, season two is is my favorite of the two seasons.” 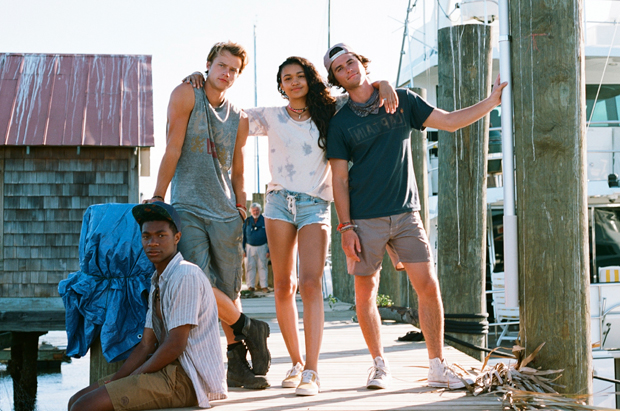 Chase, who is joined in the cast by Madelyn Cline, Rudy Pankow, Madison Bailey, Jonathan Daviss and more talent, revealed that because they’re such a tight-knit group, the show is able to thrive. “It’s just been a riot. It’s one of those things that helps the show so much. It’s like, you work with your family members and the best people on planet earth and we have so much fun outside of the show, and then we bring that back into the show,” he gushed. “I’m just super thankful that I have a group of people that I just absolutely adore and get to spend a ton of time with and make this magical show. I’m just eternally thankful for it.”

One of those people includes Chase’s girlfriend, Madelyn, which is one of the reasons the actor teamed up with Sweet Earths Foods to discuss their recent survey that explored perceptions of eating and relationships within modern dating, across the spectrum of plant-based dieters and the Gen-Z/Millennial generations prior to Valentine’s Day.

“Maddie is vegan and I’m not, so finding a way for me to implement these different dietary restrictions into my life made me into a flexitarian,” Chase explained. “So I sort of adapted a lot of plant based options into my diet because of my relationship, as well as trying things like pescatarian dishes and vegetarian dishes…Working with Sweet Earths Foods has been my way of showing people who are meat-based eaters that there is an easy way to transition into other diets and to not be scared of trying something different.”

Chase is hosting a Virtual Veggie Lovers Event, Feb. 10 from 6-7pm EST to discuss dating and “how food can be the ultimate connector.”