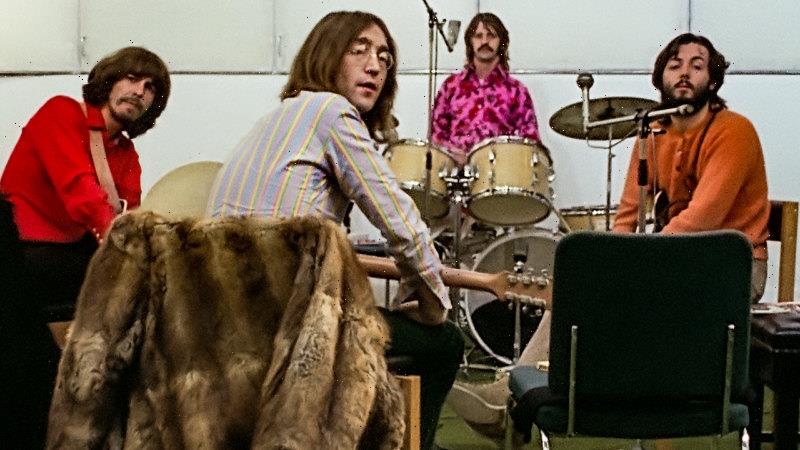 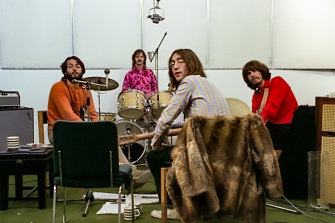 The Beatles in the recording studio during the making of their 1970 album Let It Be.Credit:Apple Corps Lrd

Peter Jackson was nine when the Beatles’ final movie came out. Let It Be was no box office smash in 1970, so he didn’t see it until well into the VHS ’80s. But he knew it was bad news. Its reputation as a grainy, muted, depressing document of a band in decay was part of rock lore: a sad end to a fantastic adventure.

How sad? So sad that the key to the sacred vault — 57 hours of rushes, 130 hours of audio — felt more like a poisoned chalice when it passed into the hands of the lifelong Beatles fan four years ago.

“Dreading it, is the word,” Jackson says from his editing suite in Wellington, where he’s been working on that material ever since. “I remember the day I got out of the taxi and walked into the Apple [Corps] offices in London to look at this footage and my feet were heavy. I had a knot in my stomach.

“I believed everything I’d read in the books about how horrible it was for them. I thought, ‘God, if Let It Be was what they allowed to be shown, what am I going to get that they didn’t want us to see?’ And I didn’t want to see the Beatles in this way.”

What he found, as reels unseen for 50 years devoured a week of eight-hour days, was a revelation. The “warts and all” footage of the Beatles at work could be painstaking but it was also funny, exciting and joyful. Moreover, the filmmaker says, hallelujah hands aloft, “I finally understood it.” 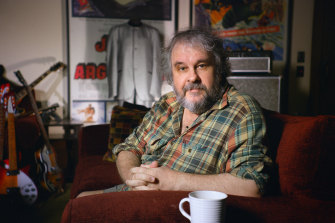 What Peter Jackson found, in reels unseen for 50 years devoured a week of eight-hour days, was a revelation. Credit:Apple Corps Ltd

He understood how, with their brand new “white album” sitting at number one around the world, the world’s biggest rock band came to be freezing on some desolate sound stage in Twickenham for much of January 1969. He understood how director Michael Lindsay-Hogg’s original cut was hamstrung by politics, delays, technical limitations and promotional obligations.

Most of all, he understood why the world — the Beatles bizarrely included — came to believe that Let It Be captured something that wasn’t actually there. “This film doesn’t show a band breaking up,” Jackson says of his new six-hour cut, which restores the film’s original working title: Get Back.

Indeed, it was shot eight months before their split was even mooted in private, by a discontented John Lennon at a band meeting that September. The fact that Paul McCartney chose to make it public shortly before the film’s eventual release naturally coloured audiences’ perceptions.

“I’ve come to realise that a lot of Paul’s and Ringo’s memories of January ’69 are really the memory of the Let It Be movie, which didn’t come out until May 1970, and that was at the time that they were breaking up and it was a very stressful time for them; a very unhappy time.

“None of them went to the premiere. The film was orphaned at that stage, and they’ve come to look at Let It Be like the rest of the world, that it was a document of their breaking up and therefore they don’t like it. 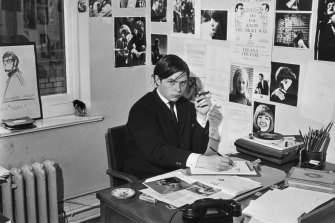 Let it Be director Michael Lindsay-Hogg, pictured in 1965, was hamstrung by politics, delays, technical limitations and promotional obligations. Credit:Getty

“But this movie, in a lot of ways, is tougher than Let It Be,” Jackson says. “It shows the Beatles trying to work out who they are and what they are in January 1969. I mean, what is there left to do? That’s the bittersweet thing: they changed the world, a bit like Frodo in The Lord of the Rings . . . only to find that it didn’t have a place for them any more.”

It’s a narrative that could only emerge with hindsight. At the time, Hogg was simply making a cinema verité document of the latest phase in the band’s restless evolution. Their idea was to write a new album from scratch: an “honest” album recorded with none of the multi-tracking artifice they’d perfected with Sgt Pepper two years earlier. It was to culminate in a recording: a live album of their first concert performance in three years.

‘The Beatles changed the world, a bit like Frodo in The Lord of the Rings … only to find that it didn’t have a place for them any more,’

With George Harrison, in particular, cold on that part of the plan, the concert devolved into the iconic Apple Corps rooftop bash, which Jackson has restored to its near 45-minute splendour for Get Back. To his own surprise, it’s the sequence that flips the wintry gloom of the Let It Be legend on its head.

“I’ve never liked the rooftop thing,” he says. “I’ve been aware of how historic it is . . . but I’ve always seen it through that filter of May 1970. It’s always looked grainy, it’s always looked dull, ” partly due to problems at the time with blowing up 16mm to 35mm film, he explains. “It looks cold and miserable; they don’t want to be there . . .

“The big surprise was when we sat down with the rushes; 10 cameras rolling with thousand-foot loads… I just saw this joy. I saw them performing in a way that I’d never seen before. As soon as I saw the rushes for that, I said to Apple, ’Whatever we do, we’ve got to have the entire rooftop concert.’ ” 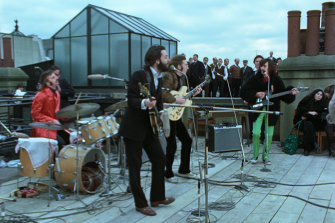 “I just saw this joy. I saw them performing in a way that I’d never seen before,” says Jackson of the rooftop concert. Credit:Apple Corps Ltd

McCartney was dubious. But he quickly came on board when he saw the cut, Jackson says. “It’s my favourite footage of the Beatles performing. I mean, it’s unbelievable. This is handheld cameras, right up in their faces, singing, hands on guitars . . . You see the joy. They’re not the mop-tops from Shea Stadium [on their final tour of 1966] . . . you see the memories of Hamburg and the Cavern Club just flooding back. They are becoming that band again. I think they surprise themselves at how great they are.”

The joy is set to escalate for fans, as it did for Jackson when he saw the rest of that day’s rushes. “When they’ve finished, they run downstairs and they immediately listen to the whole thing back. We’ve got footage of them doing that and their faces are red, they’re flushed . . . they’re just so jazzed up. I mean, if you’d said to them, ‘Go out and perform another 10 songs,’ they would have. They’re so in the zone, they’re so adrenalised.”

In that moment, says Jackson, “there’s this realisation that they did genuinely achieve what they set out to achieve with this whole project, which is to get back to that [live band chemistry], and you see it happening song by song on the roof”.

Not that everything the director unearthed was rosy cheeks and youthful enthusiasm. Again, with time on his side, he’s able to show some of the more contentious developments that the Beatles censored from Hogg’s film.

“He filmed George leaving the band. You read about it in all the books, that George walked out at Twickenham and didn’t come back for three or four days [until they moved to the cosier Apple Corps HQ in Savile Row]. Michael actually filmed it all. It’s there, we see it . . . but they didn’t want that to be part of his film.

“Fifty years have healed a lot of wounds. People are a lot more relaxed now,” Jackson says. In fact, his final cut of Get Back was passed by famously formidable gatekeepers McCartney, Starr, Olivia Harrison and Sean Lennon without a single note.

“I got the understanding that the emotion and the awareness of their image, both individually and as a band, would have been really heightened in 1970 . . . But that’s so long in the past now [that] they’ve looked on this footage as a very important historical record of their work. And so they’ve left me alone.”

Alone with history. It’s hardly new territory for Peter Jackson, whether working with the sacred books of J.R.R Tolkien, the cinematic nostalgia of King Kong, or restoring footage and recollections of World War One for his stunning 2018 documentary, They Shall Not Grow Old. It was largely his acute sense of responsibility to the historical record, he says, that blew the original single-film remit for Get Back into its six-hour form. 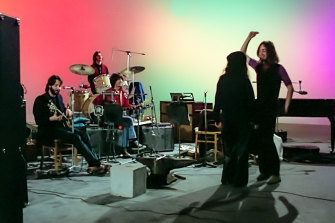 “What I find most entertaining is just watching them work.” John and Oko relax with a dance. Credit:Apple Corps Ltd

“The first time we cut it together we tended to put the entertaining stuff, and then the narrative stuff; things that told the story,” he says. “And then I suddenly realised, for me, what I find most entertaining is just watching them work.

“It’s not anything that’s got great significance in the overall story, not anything that’s meaningful, but just watching them try to figure out the structure of [a song]: Is it verse, verse, solo, chorus, what? They have all these debates and then they get totally muddled up and have to write it down on paper . . .

“That’s not what you gravitate to in storytelling but that is the Beatles at work. And this is the only chance we’ll ever get, the only footage that we have of them doing this, so I can’t be responsible for making this film and leaving that out.” 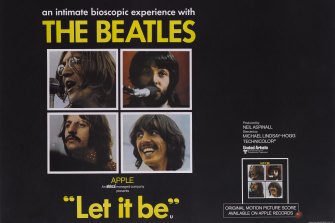 A promotional poster for Let it Be.Credit:Getty

So far, so “honest”. But in a modern creative realm defined more by CGI deep fakery than grainy cinema verité, the question needs to be asked. In his epic process of restoration and reassembly from a 22-day patchwork of sometimes coinciding, sometimes disconnected sound and vision, how much bending of The Truth did Jackson allow for the purposes of a good story?

“I’ve been thinking about this a lot over the last four years,” he responds. “I don’t describe this as a true story. There’s a certain truth in the 57 hours of footage and the 130 hours of audio . . . but you can’t even call that the truth because there were conversations that would have happened that weren’t being recorded; meetings upstairs, meetings at Ringo’s house on the weekend. The truth only existed in January 1969 and if you weren’t there, you’re never going to know it.

“But you know, I was grateful as a fan to get an understanding, finally, of what this was all about. Seeing it all in order . ..  I saw the story I had to tell. Here was the narrative, the story of what happened in January 1969, and I’m going to tell it as accurately as I can tell it with the material I have.”

‘I was grateful as a fan to get an understanding, finally, of what this was all about. Seeing it all … I saw the story I had to tell.’

In the final analysis, the relative expense of film versus audio tape means that the Get Back story is “mostly in the voices,” he says, so the cunning craft of stealing vision to support audio without distracting the viewer is the only real act of “cheating” the process entailed.

“I’ve always been very aware of my responsibility as a documentarian,” Jackson says. “You know, I keep beating myself up because during this whole editing time I’ve been thinking, ‘Well, this footage has been in a vault for 50 years. And whatever we don’t put in this movie might not be seen for another 50 years. It’s history. Music history.’ So, I want to make sure this presents as full a picture as I can.”

TV, movies, Find out the next TV, streaming series and movies to add to your must-sees. Get The Watchlist delivered every Thursday. 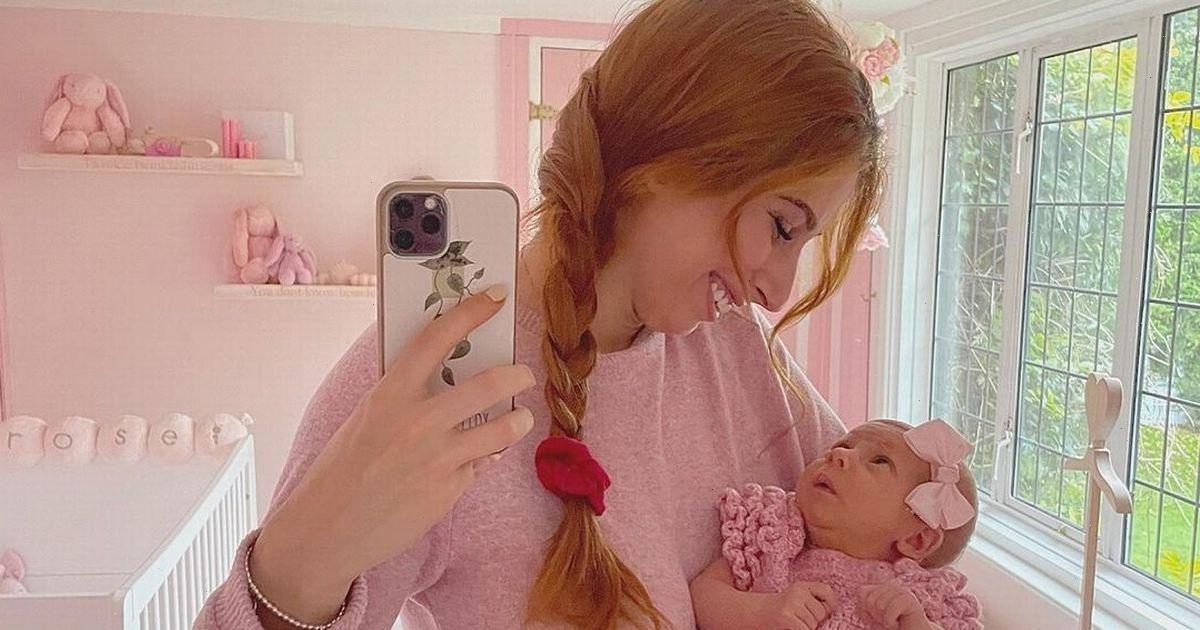