PARIS — The French capital may be empty of visitors, but the jewelers on Place Vendôme bustled with activity during couture week, polishing up collections to show in intimate settings, present on a screen and — most importantly — send to Asia.

Traditional calendars have been upended by the pandemic and jewelry shown over the week was the result of efforts that were highly complicated by the crisis. Work may have been more difficult behind the scenes, but this did not take away from the luster on display. Jewelry houses are betting on a strong return of business when things begin to clear up and traveling resumes, and are gearing up for recovery times — in the meantime, offering a shot of glamour to offset the current gloom.

Boucheron, Chanel, Van Cleef & Arpels were among the handful of houses showing full collections, while Dior and Chaumet have plans to show high jewelry in March. The new chief executive officer of De Beers, Céline Assimon took to the screen to introduce the diamond specialist’s first collection under her direction, and Fred joined in with its first major high jewelry launch under the direction of CEO Charles Leung. 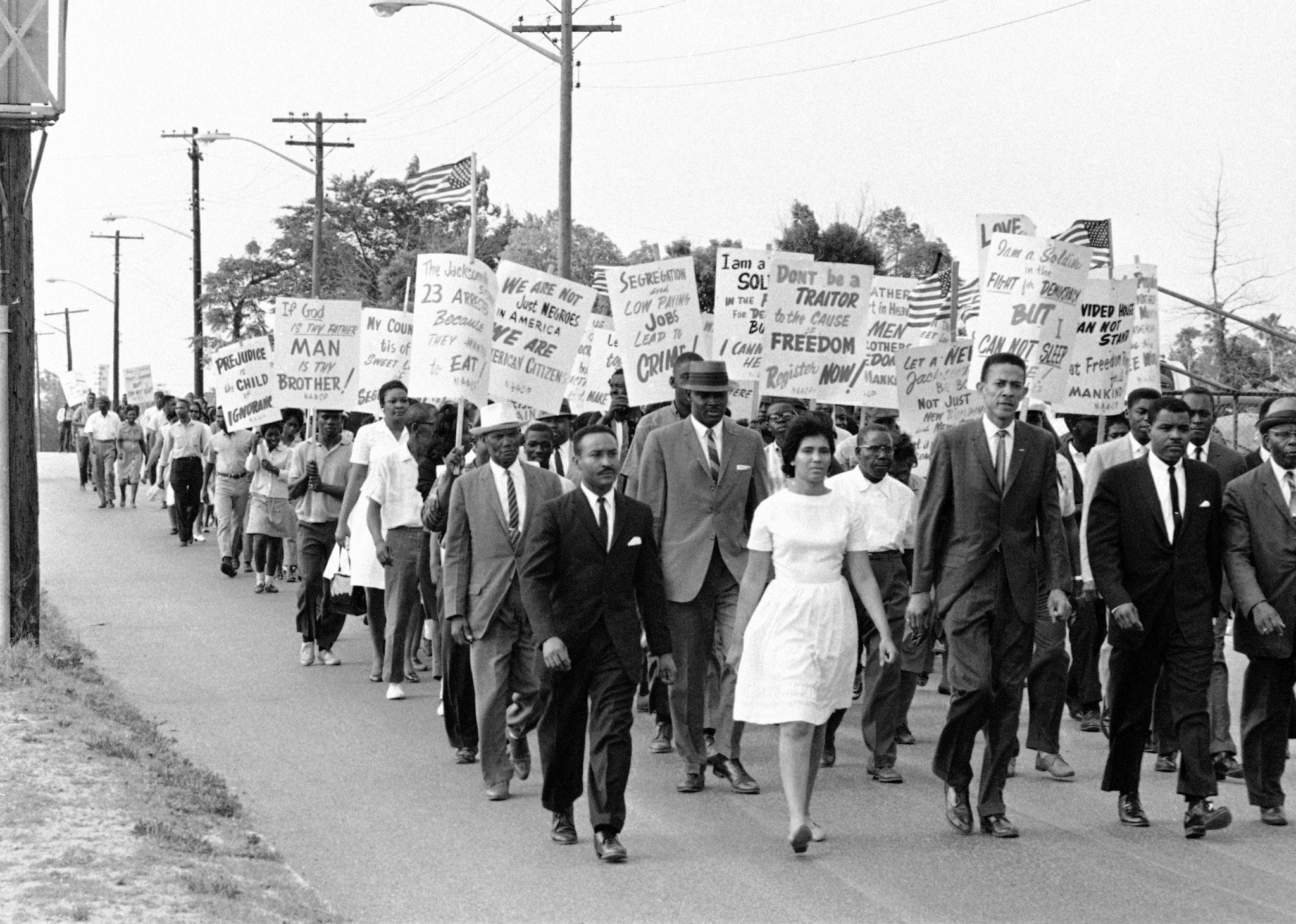 A History of Fashion in the Black Civil Rights Movement

Van Cleef & Arpels welcomed journalists to the plush first floor of its freshly refurbished flagship, where 80 pieces of the 140-strong collection were on display.

“We wanted to show it, even if we couldn’t do so with a more immersive or flamboyant manner — there will be other occasions. What counts is that the pieces were made — and that they’re here,” said CEO Nicolas Bos, gesturing to a row of trays that sat in front of an arched window overlooking the spiraled column of Place Vendôme.

The space-inspired theme was called “Sous les étoiles,” drawing on literary references from the past, as well as current science — executives met with astrophysicist Isabelle Grenier, who shared images showing the rich colors seen in space.

“It’s an homage to the stars, the constellations, galaxies, celestial bodies — a play on the color and forms — or how they were imagined and dreamt of by writers and poets over the centuries,” Bos said.

Asked about how the pandemic has affected the house’s strategy, he pointed to the juggling involved to target the right markets at the right time.

“For sure, this has been an unusual — and quite complicated — year and it’s been necessary to take measures to preserve the teams, the workshops, the activity, there has been rebalancing — with markets closing and opening,” he said.

“We had some good momentum that returned in Asia, in China, in domestic markets of South Korea, in Japan,” he continued, nothing that business was tougher in the U.S, the Middle East and Europe.

The house was singled out by its owner, Compagnie Financière Richemont, for helping the group’s jewelry division perform strongly at the end of the last year, posting growth in all regions but Europe. Richemont does not provide a breakdown of performance by brand.

“We’ve had to focus our activities — our stocks, the jewelry pieces, the investments — in the markets where we can and where it makes sense, while countries that are a bit more in retreat, like European countries, we’ve reduced activity, because there are restrictions, while continuing to preserve what will be needed in the future. Obviously we wouldn’t close a store like Place Vendôme, we won’t closet the ateliers, we have to guarantee this continuity,” he said.

The executive stressed the importance of digital channels.

“We had online sales and e-commerce, but it was considered more of a service that we were offering clients, in some countries it worked well but it wasn’t something we really highlighted, and now we’ve realized, during this period, that it is really important to have this,” he said, noting the acceleration.

“It’s something we knew would develop, but we had a real acceleration and we think that in the coming years, we’ll be even more invested in this combination of traditional distribution networks — I believe that stores and physical meetings between salespeople, experts, clients is absolutely essential to our activity,” he added.

Highlights of the collection included the reversible Antennae necklace made with 154 pink and purple sapphires, that move from pale pink to a deep violet, representing the collision of two galaxies that started around 500 million years ago.

The Ciel de Minuit necklace is made from sculpted plates of lapis lazuli set with diamonds and sprinkled with pyrite flakes for added dazzle.

Chanel also showed an elaborate necklace made of lapis lazuli. The constellation astrale necklace features a central star with a 4.47-carat yellow sapphire. 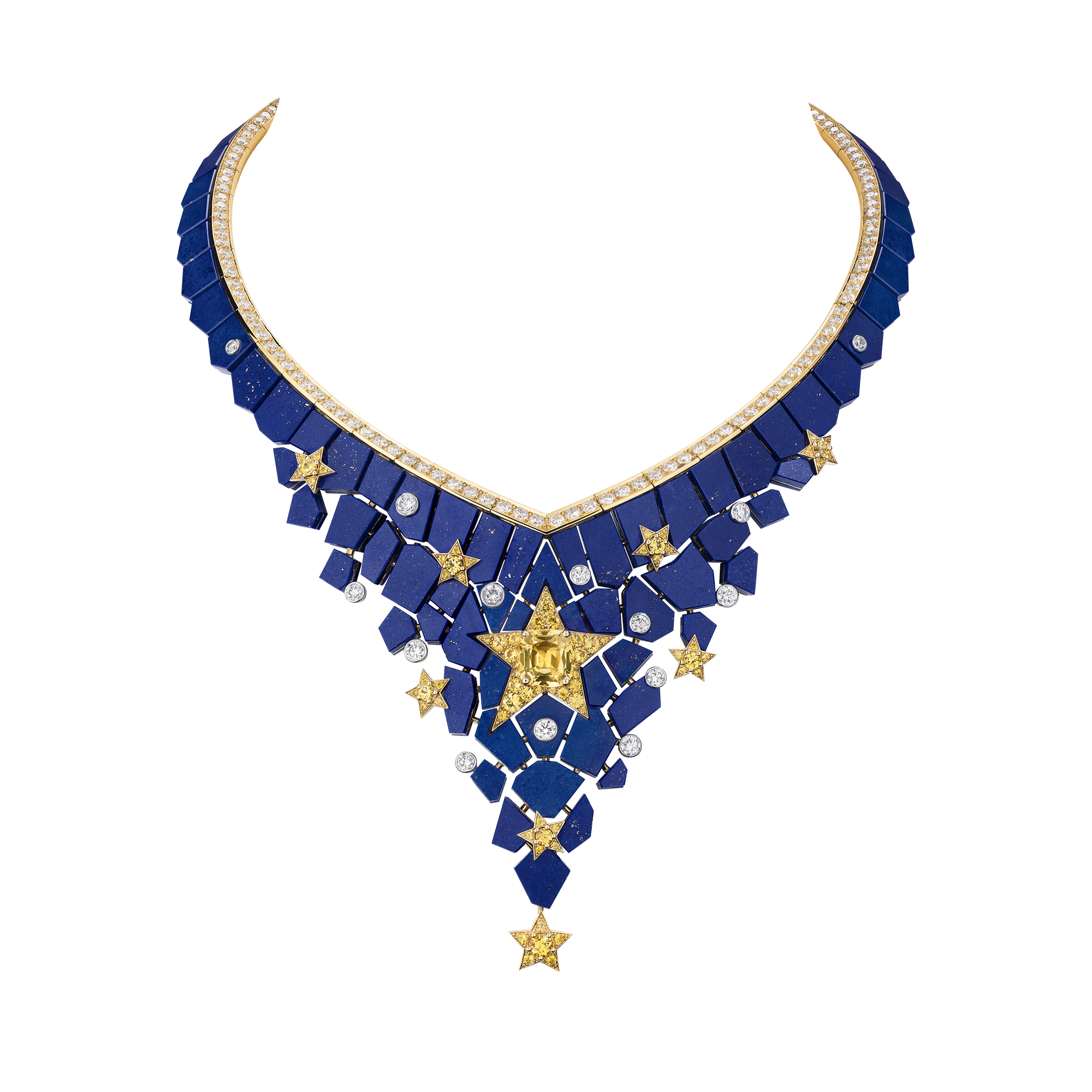 The house covered the first floor windows overlooking the Place Vendôme with faint images of water scenes from Venice — as if the space sat on a canal. A screen showed flashes of light on water at the end of the room, and a few mooring poles were set up as props.

Stones were worked into elaborate pieces featuring spiraled poles, hats with ribbons floating off of them and powerful lion figures. The Sérénissime set draws on architecture, with onyx and diamond squares structured around a 27.09-carat oval mandarin sapphire. 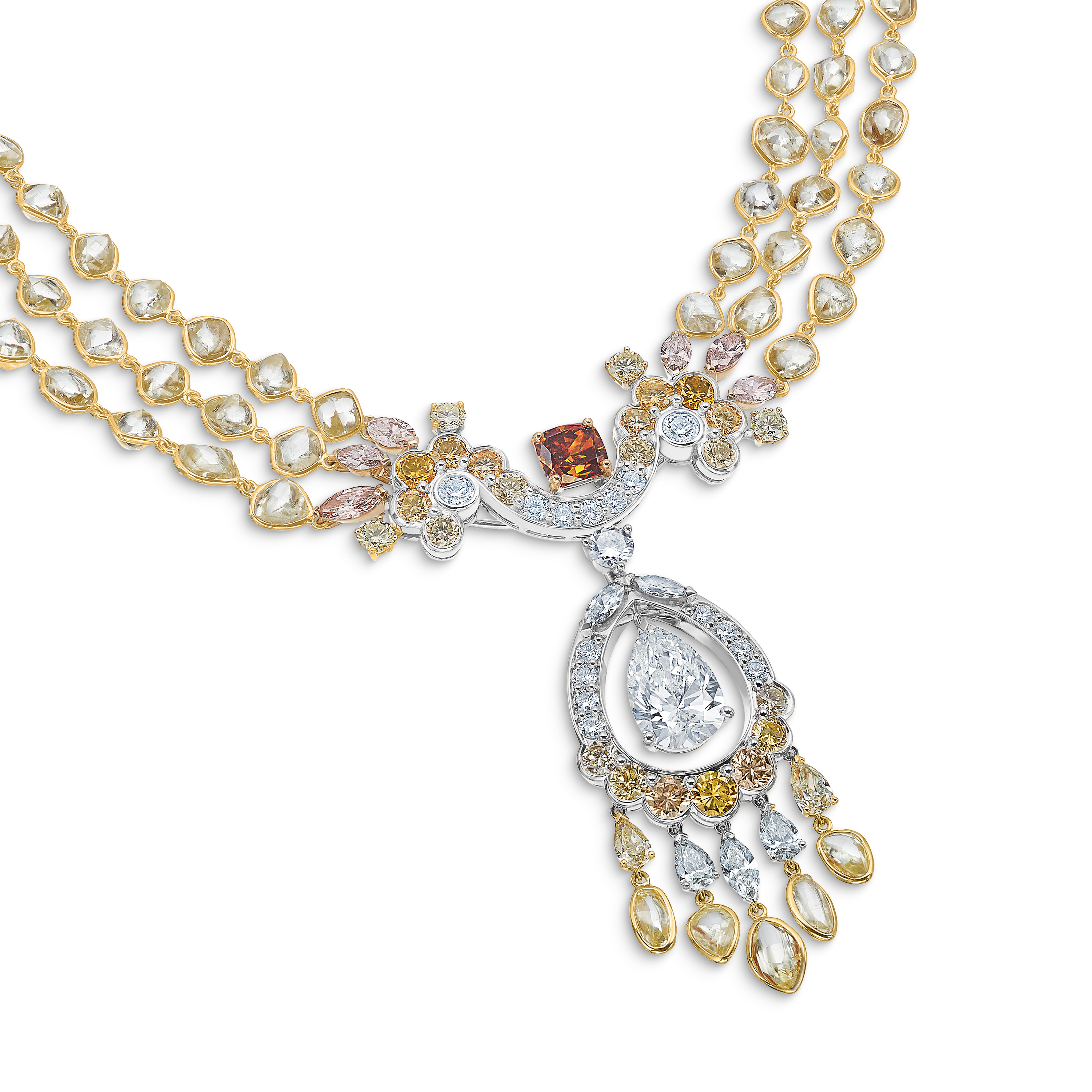 At De Beers Diamonds, Assimon introduced herself through an on-screen presentation, noting it was under unusual circumstances that she had moved to London to take up her new position, during a pandemic. Noting the brand had pioneered the use of rough diamonds in high jewelry, Assimon said plans were to pursue collaborations in the future.

“We have an all female design studio, they are brilliant, they are bursting with ideas, and my role is to empower them,” she said, predicting bolder collections in the next five years, citing oversize earrings, rings, ear cuffs, asymmetrical looks and versatile pieces.

Assimon showed pieces from the “Reflections of Nature” collection, inspired by striking landscapes in far-flung regions — an isolated island in Northern Canada, a canyon in South Africa, and the Namibian desert. The Namibian Wonders necklace is meant to reflect the grooves in the sand dunes, and features a fringe of rough diamonds set in a minimalist, spectacle setting. 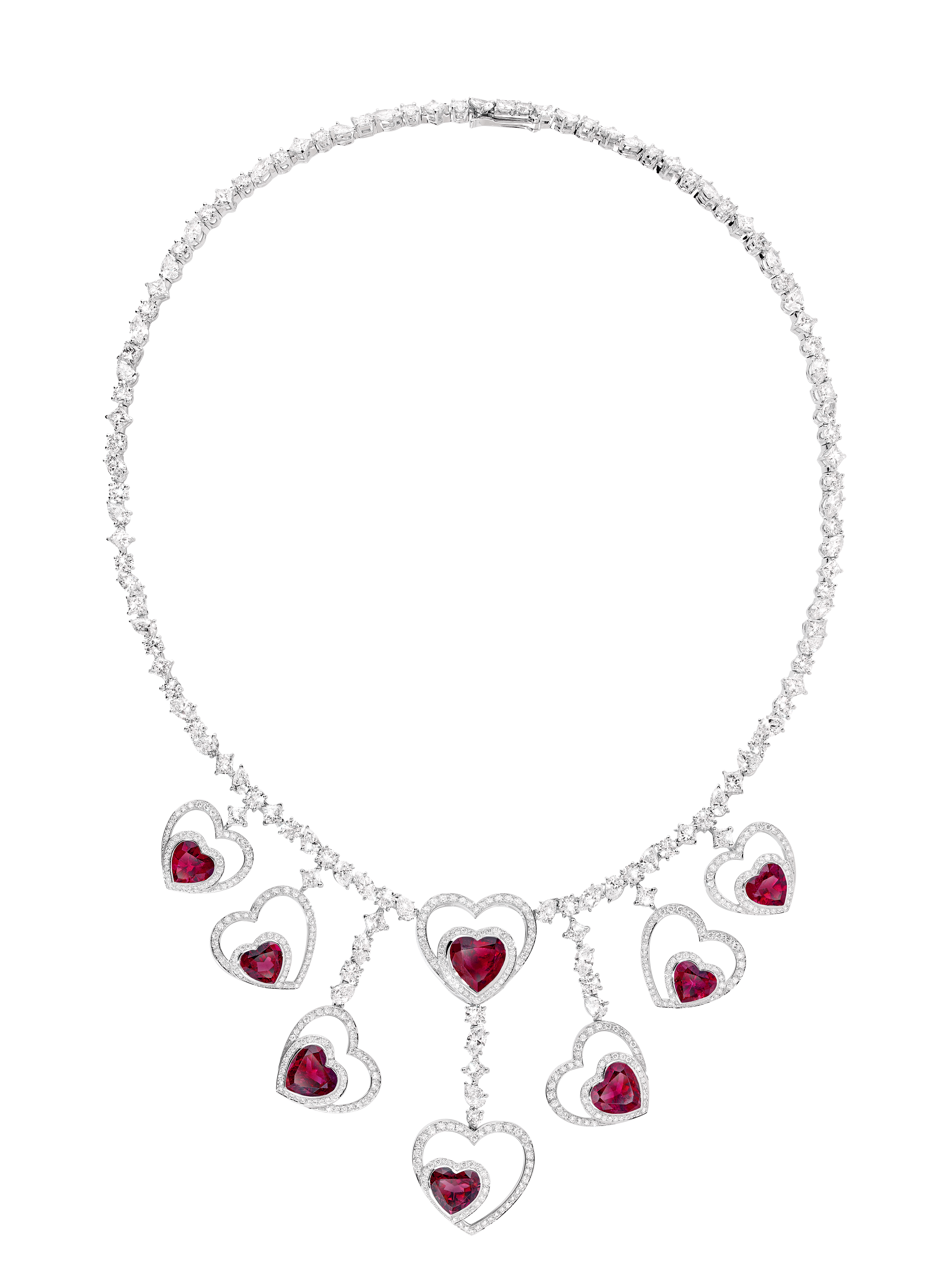 Fred’s Pretty Woman necklace, based on the classic film. Courtesy of Fred

LVMH Moët Hennessy Louis Vuitton-owned Fred is staking out territory with the launch of its new “Pretty Woman” collection, based on the theme of love, with elaborate diamond and rubellite necklaces with dangling hearts. The Audacious necklace features 554 diamonds — a total of 20 carats — and is transformable, turning into earrings, a brooch and a sautoire. The brand’s campaign features Emma Roberts, the niece of “Pretty Woman” star Julia Roberts.

Chaumet, which plans to launch a new high jewelry collection in March, showed the latest additions to its liens collections.

Dior is preparing a 54-piece high jewelry collection to be presented on March 2 in Paris, and March 18 in Shanghai. A decade after Le Bal des Roses collection, Victoire de Castellane will be returning to the rose theme with Rose Dior, featuring stylized flowers, inspired by Christian Dior’s garden, featuring colored stones on petals, thorns and stems. 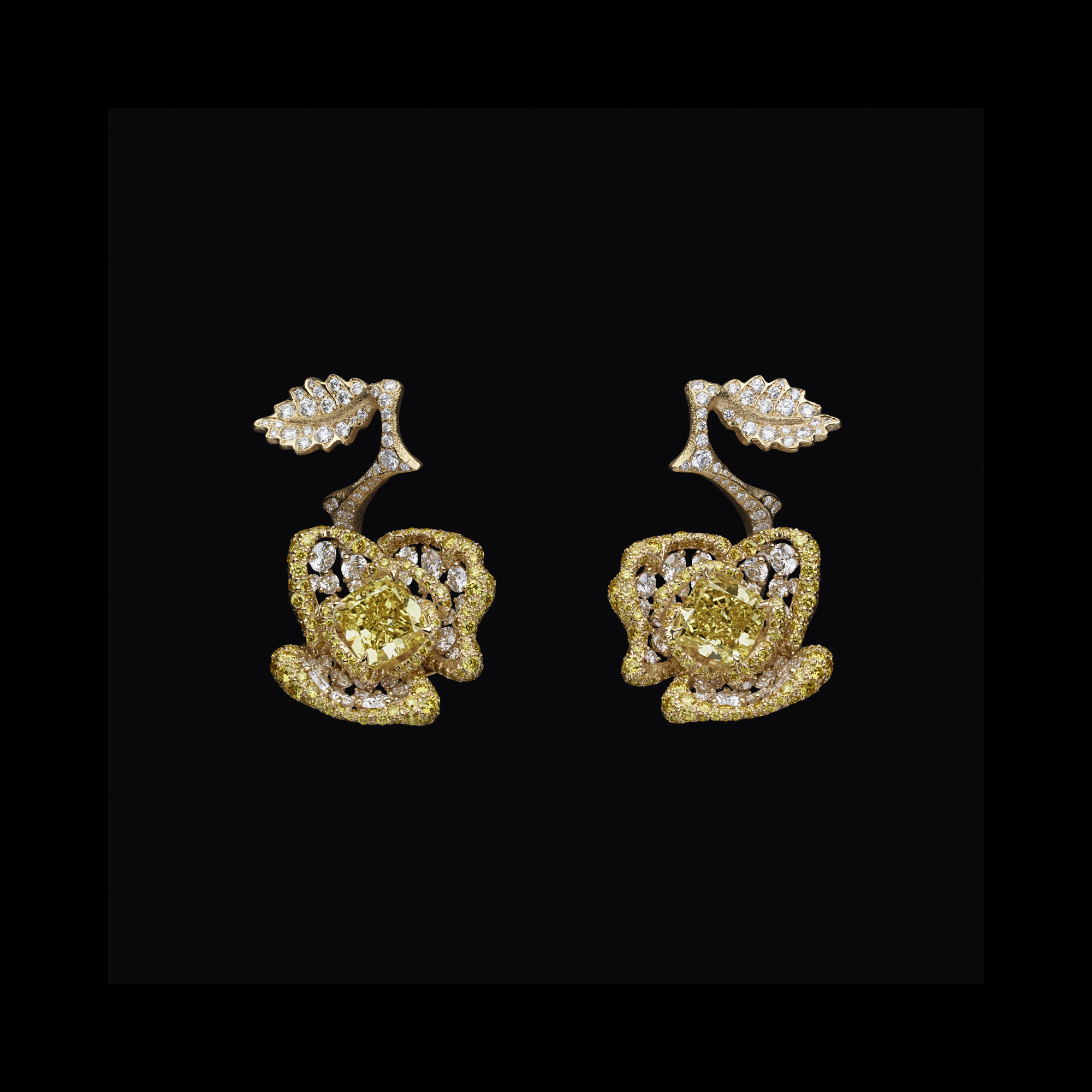 LVMH watches and jewelry division, home to Fred, Chaumet and Dior, saw annual sales decline 24 percent last year, to 3.36 billion euros, with improvement in the second half, thanks to a strong recovery in China in the second half.