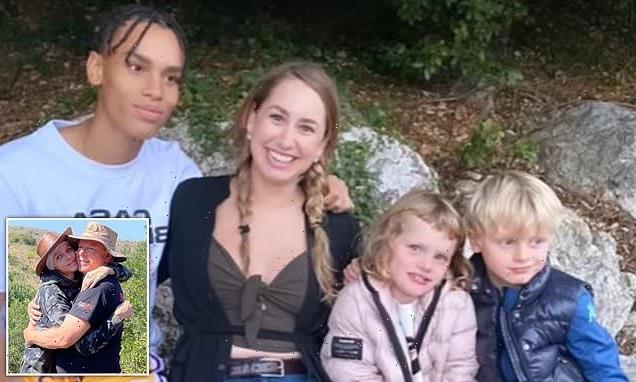 All four of Prince Albert’s children have posed together for the first in a picture shared by Jazmin Grimaldi.

Jazmin, 29, the prince’s illegitimate daughter with Tamara Rotolo shared a year in review round-up  showing several photos from through the year.

It included a shot where she poses with her half-siblings on a bench.

Dressed down in jeans and crop top, with her hair in pigtails, the California-based royal wraps her hair around half-brother Alexandre Grimaldi-Coste, 18, Albert’s son with flight attendant Nicole Coste. 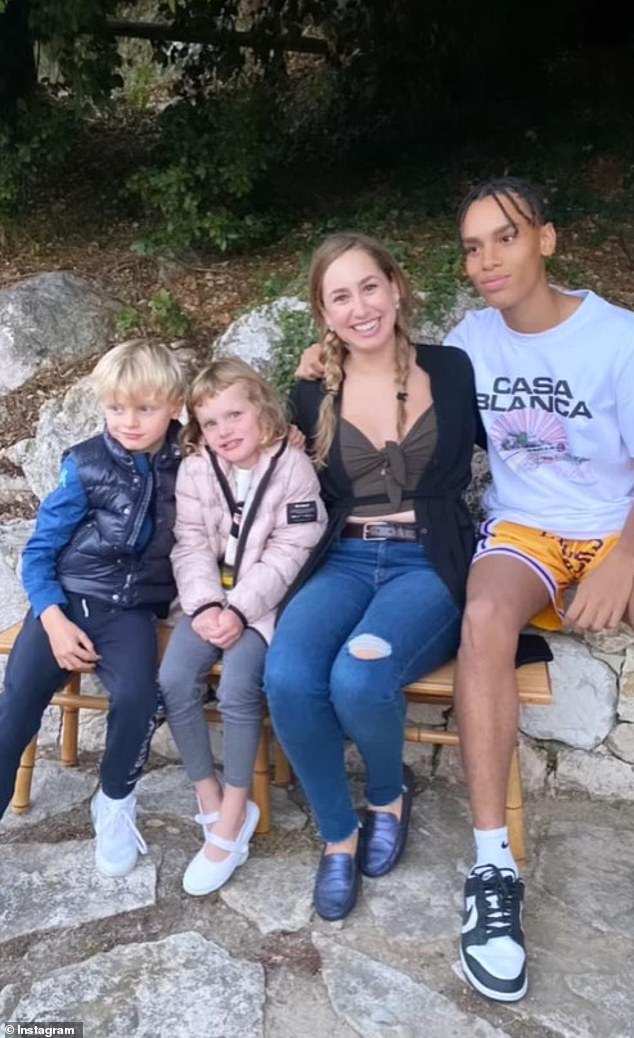 Jazmin share the snap with an array of pictures from her glamourous jet-setter life, which showed her dancing, attending Formula 1 races, relaxing on the beach, baking and walking her dog.

In August, Jazmin revealed her close relationship with Albert’s second love child Alexandre Grimaldi-Coste as she marked his 18th birthday in a sweet Instagram post.

She shared a series of Instagram posts from her half-brother’s birthday party on Saturday, writing: ‘It’s a celebration. Happy birthday my little brother Alexandre!’

Who are Prince Albert’s four children?

Jazmin Grace Grimaldi, born 1992, is Prince Albert’s first child. The actress, now 29, who lives in California,  is the daughter of Tamara Rotolo.

Tamara had been working as a waitress when she met Prince Albert. Albert confirmed he was her father in 2006 following a DNA test, Jazmin did not meet him until she was 11.

Since accepting her, Albert has  provided support and extended an invitation for her to study and live in Monaco – although giving her a substantial pay-off to not be in the line-of-succession.

Alexandre Grimaldi-Coste, born in 2003, is Albert’s second-born and first son. His mother is Nicole Coste, a Togolese flight attendant who had an affair with Prince Albert.

Coste said she became pregnant only after a visit to Monaco celebrate her 31st birthday turned into a tryst.

Albert provided for her  and visited mother and child after confirming paternity. As his parents never married, he is not in the line of succession.

Prince Jacques and Princess Gabriella, born 2014, are the Prince’s only legitimate children with his wife, Princess Charlene.

The twins were born three years after their parents marriage in 2011 and are heir and second in line to the throne.

The 29-year-old is a trained opera singer and the little-known daughter of Prince Albert, 63, and American real estate agent Tamara Rotolo.

Albert confirmed he was the biological father of Alexandre, 18, whose mother was Nicole Coste, a former Air France flight attendant from Togo, in May 2005, just before he was enthroned as Prince of Monaco,

A DNA test in May 2006 confirmed Albert was the father of Jazmine Grace, the result of an affair with Tamara Rotolo, an American estate agent he met while she was on holiday in the South of France.

Her mother, then a waitress, had a fling with the monarch back in 1991, while on vacation.

Now a real estate agent, Tamara took Jazmin to California with her and she only met her father aged 11.

Talking about meeting her father for the first time, she said back in 2015: ‘I wanted that moment to connect with my father, to get to know him, and to have him get to know me,’ Jazmin said.

‘Not having had that figure around, I missed that. It’s wonderful that it happened when it did, and we’ve been enjoying a great relationship ever since.’

As such Jazmin is a descendant of Grace Kelly, who married Prince Albert’s father, Prince Rainier of Monaco in April 1956.

It’s been a tough year for the House of Grimaldi, with rumours of strife between Prince Albert and Princess Charlene, 43, while Prince Albert faces yet another paternity suit.

Former Olympic swimmer Charlene has been apart from Albert most of the year and spent 10 months in her native South Africa after contracting an ear nose and throat infection.

Shortly after her return to Monaco she was admitted to a European treatment facility for  exhaustion, both emotional and physical’,

The royal missed the seventh birthday of her twins Gabriella and Jacques and her 10 year anniversary with Albert.

In the days after her arrival, Charlene’s sister-in-law Chantell Wittstock, told MailOnline the princess may not be returning to the palace and did not plan to immediately return to public engagements, although she later retracted the remark. 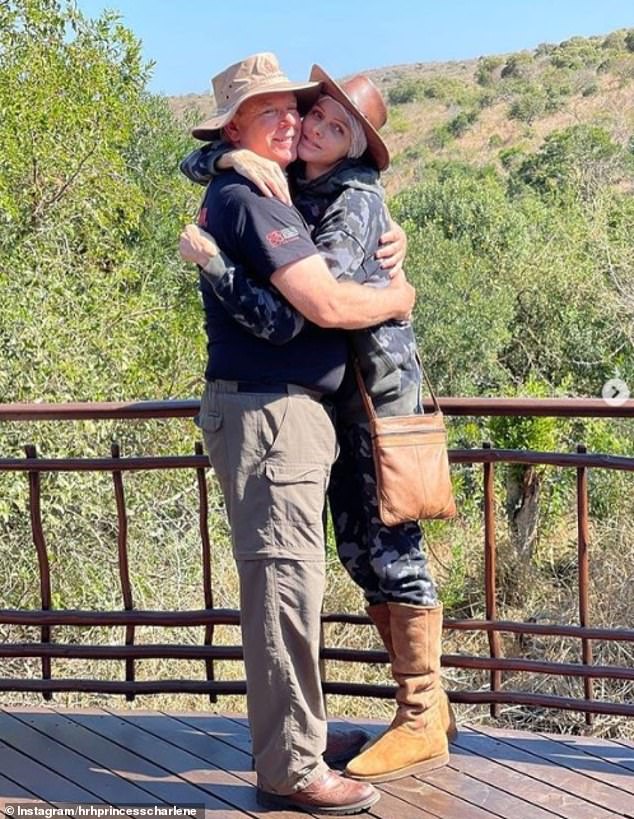 Albert’s wife Charlene, 43, spent 10 months in South Africa during 2021 before returning to Monaco 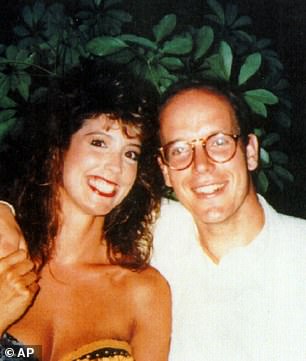 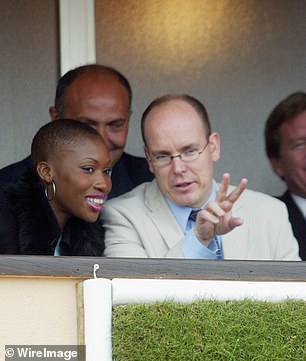 Jazmin’s mother Tamara, then a waitress, had a fling with the monarch back in 1991, while on holiday (pictured left together). Meanwhile Alexandre’s mother Nicole, then a flight attendant, had an affair with the Prince for years (pictured together in 2002)

Charlene’s time away followed fresh allegations last December that Albert had fathered a love-child (which would be his third, if proven) with an unnamed Brazilian woman during the time when he and Charlene, a former Olympic swimmer for South Africa, were already in a relationship.

Neither party is now commenting, suggesting some kind of generous settlement may have been reached, as happened with Albert’s earlier love children.

Both Jazmin and Alexandre were struck off Monaco’s line of succession in return for vast financial settlements.

While she was in South Africa ,Prince Albert hit back at rumours marital woes insisting Charlene ‘didn’t leave in a huff’ and remains in South Africa only because of ‘medical complications’ following a ‘severe ear, nose and throat infection’. 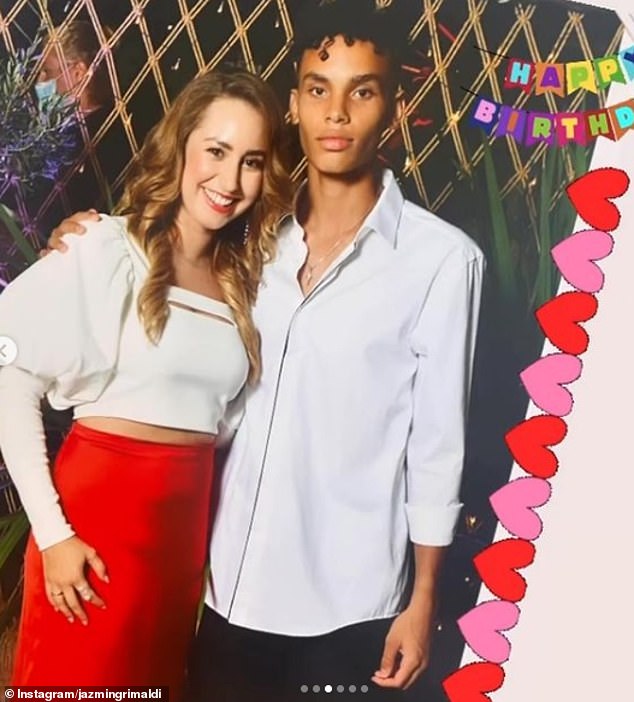 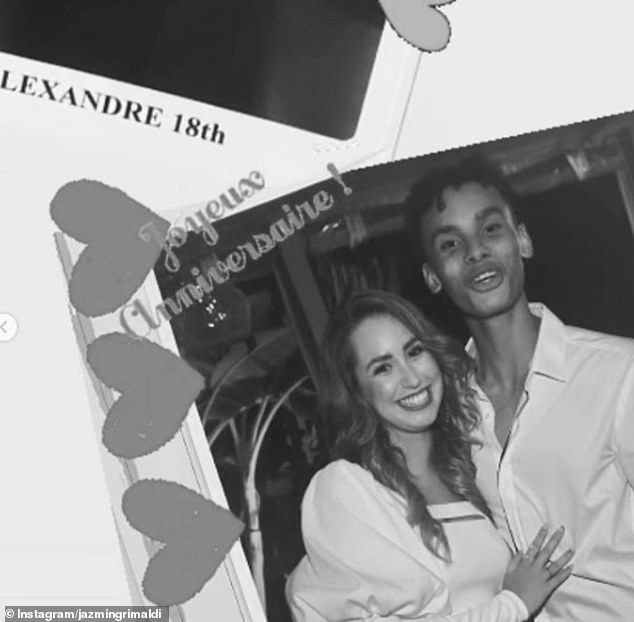 In another rare candid snap of the half siblings, Alexandre and Jazmin can be seen beaming at the camera with their arms around one another in pictures from his birthday party 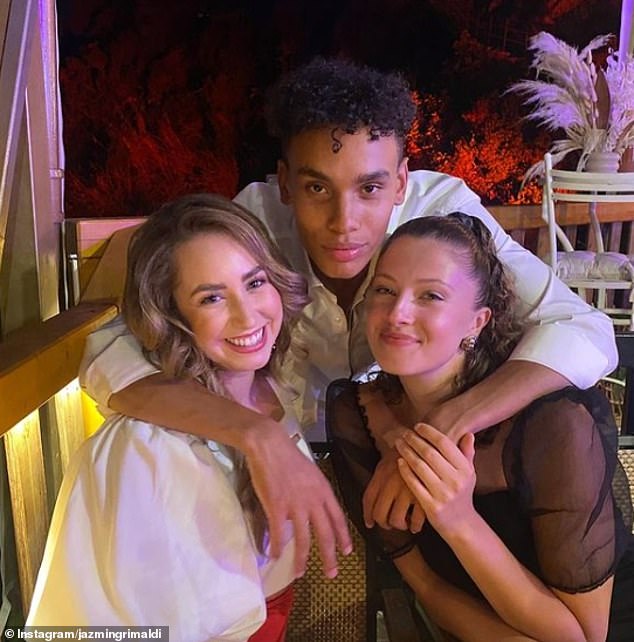 In the snaps, the brother and sister can be seen cuddling as they join fellow party goers for Alexandre’s 18th birthday bash

January 27 – Charlene is pictured with Albert for the Sainte Devote Ceremony in Monaco.

March 18 – Charlene is pictured at the memorial for the late Zulu monarch, King Goodwill Zwelithini at the KwaKhethomthandayo Royal Palace in Nongoma, South Africa

April 2 – Charlene posts an Instagram picture of herself, Albert and their twins Jacques and Gabriella for Easter It is unknown where the image was taken.

May 8 – Albert, Jacques and Gabriella attend a Grand Prix event in Monaco without Charlene

May 10 – Albert attends Monaco Gala Awards in Monaco without Charlene

June 3 – New photos emerge of Charlene on her conservation trip

June 24 – Charlene’s foundation releases a statement saying the royal is unable to travel and is undergoing procedures for an ear, nose and throat infection

July 2 – Charlene and Albert mark their 10th anniversary separately. ‘This year will be the first time that I’m not with my husband on our anniversary in July, which is difficult, and it saddens me,’ Her Serene Highness Princess Charlene said in a statement.

July 3 – Albert appears with glamorous niece Charlotte Casiraghi at the 15th international Monte-Carlo Jumping event, which is part of the Longines Global Champions Tour of Monaco,

August 13 – Charlene undergoes a four-hour operation. The reason is not announced

September 2 – She is discharged, with a statement from the Palais Princier reading: ‘Her Highness is closely monitored by Her medical team who said that Her condition was not worrying’

November 8 – Charlene arrives back in Monaco. Prince Albert said within hours it became clear she was ‘unwell’

Following his return from the trip, Prince Albert holds an intervention with Charlene’s brothers and a sister-in-law in which Charlene ‘confirmed’ she would seek ‘real medically framed treatment’ outside of Monaco

The royal told People that the speculation over the state of his relationship with the Olympic swimmer has ‘affected’ them both, but that he didn’t address it early because he ‘was concentrating on taking care of the kids’

Lifestyle magazines across Europe have speculated feverishly that the royal couple could be headed for divorce. French magazine Madame Figaro stated the images ‘failed to convince the Monegasques’ amid reports Charlene is looking for a house in Johannesburg.

The magazine asked: ‘How long can she remain away from her children, her duties?’

‘How long will the fight against rhinoceros poaching remain the Princess of Monaco’s top priority?

‘How long will Albert II of Monaco go on bearing this affront, which is becoming ridiculous?’

Historian Philippe Delorme said that ‘lots of people got the impression it was an arranged marriage’ between Charlene and Albert, adding: ‘Albert chose a wife who resembled his mother, and Charlene clearly felt very ill at ease in this Grace Kelly role they wanted her to play’

Princess Charlene met Prince Albert in 2000 during a swimming competition in Monaco and the pair married in 2011, before welcoming twins Gabriella and Jacques in 2014.

Born in Rhodesia- a previously unrecognised state in Southern Africa colonised by the British, she relocated to South Africa aged 11.

She had a successful swimming career and went on to win three gold medals and a silver medal at the 1999 All Africa Games in Johannesburg, as well as representing South Africa at the 1998 and 2002 Commonwealth Games and winning a silver medal in the 4 × 100 m medley relay in the latter competition.

However the pair’s marriage has made numerous headlines over the years, with a third paternity suit emerging last year.

Soon afterwards Charlene infamously shaved half her head in the style of a punk rocker last December.

This was seen as the first public sign of a worsening crisis that could end in a multi-million pound divorce.

Speaking to Page Six recently, a source described as the royal’s friend said: ‘It is unfair that she is being portrayed as having some kind of mental or emotional issue.

‘We don’t know why the palace is downplaying that she almost died in South Africa.’

The source explained the royal had a severe ear, nose and throat infection, which resulted in ‘severe sinus and swallowing issues stemming from an earlier surgery’.

The friend added: ‘She has not been able to eat solid food in over six months because of all the surgeries she has since gone through. She has only been able to take in liquids through a straw, so she lost nearly half her body weight.’

Elsewhere friends of Princess Charlene gave Tatler a rare insight into what the royal is really like, insisting that the former swimmer is a force to be reckoned with.

One source rubbished any public perception that Charlene is ‘naive’ and trapped in an unhappy marriage with Albert, saying: ‘I don’t for one second think she did not know what she was doing when she married him.’

But one warned the mother of Prince Jacques and Princess Gabriella, seven, is not the type to be blindly controlled by the Monaco royal household.

‘Charlene is no Princess Di.’ one said. ‘She may come across as being extremely naïve, but nothing could be further from the truth. She is very good at keeping her smarts under wraps.’

Meanwhile Prince Albert has continued to make public appearances with their twins, Jacques and Gabriella.

The trio attended a tree planting event in Monaco and the Monaco National Day celebrations, where the children held up heartrending signs saying, ‘Miss you Mommy’ and ‘Love you Mommy’.

In interviews, Albert explained he had stepped up to play a bigger role in his children’s lives as the family copes with Charlene’s ongoing health issues.

Jacques and Gabriella are homeschooled at the palace after being taken out of the classroom due to Covid.

‘For me, it’s pretty simple – my priority is my family,’ he said in an interview this month.

‘Of course, without neglecting state affairs… I hope everyone understands that. When I can be with my kids, I do it without hesitation.

‘This is an extremely important time in their life – the way they grow up helps them see the world.

‘And if one of the parents is away for medical reasons, the other parent has to be there.

‘I have heard too many friends and acquaintances telling me that they wish they had been there for their children, at a certain age, taken up by their work or their professional life.

‘I don’t want to have these regrets.’ 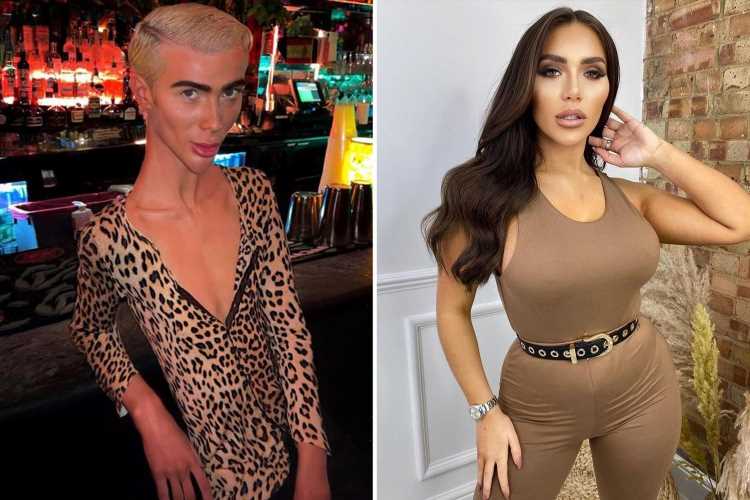 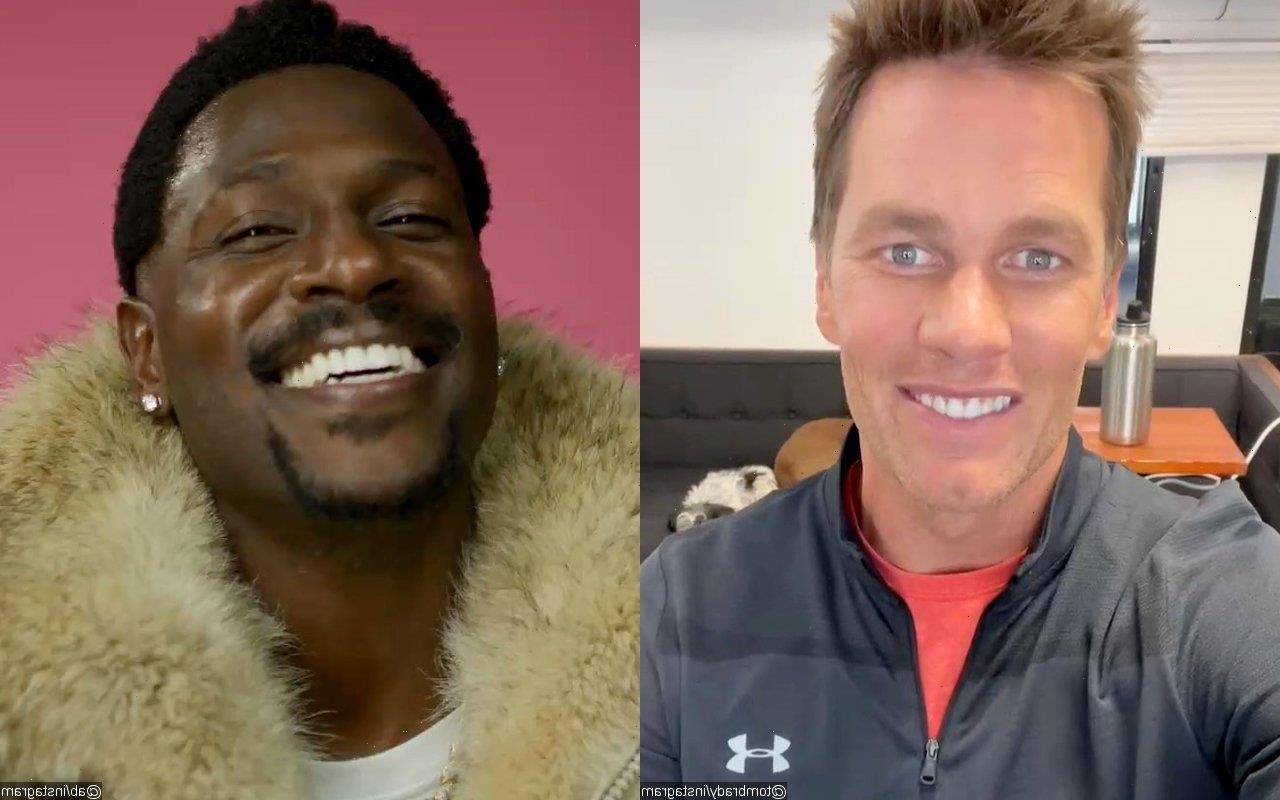