Jab buddies! Crown Prince Frederik of Denmark, 52, reveals he had his first dose of the Covid-19 vaccine on the same day as the Duke of Cambridge, 38

The heirs to the throne in both Denmark and the UK have revealed they received their first doses of the Covid-19 vaccine on the same day.

Crown Prince Frederik of Denmark, 52, got the jab on Tuesday and shared a snap on the royal court’s official Instagram page, to drive vaccination efforts.

Meanwhile, the Duke of Cambridge, 38, this morning revealed that he also received his first dose on the same day at the Science Museum in London.

Frederick, who is the heir to the Danish throne, and lives at Amalienborg Palace in Copenhagen with his wife Princess Mary, 49, and their four children, thanked health staff for their efforts.

Frederik joined the 2.7 million people in Denmark who have received the jab. Currently, 17 per cent of the country’s 5.8 million population has been fully vaccinated.

A picture of the moment shared on Tuesday showed the prince donning a face covering, while a nurse pressed a needle into his arm. 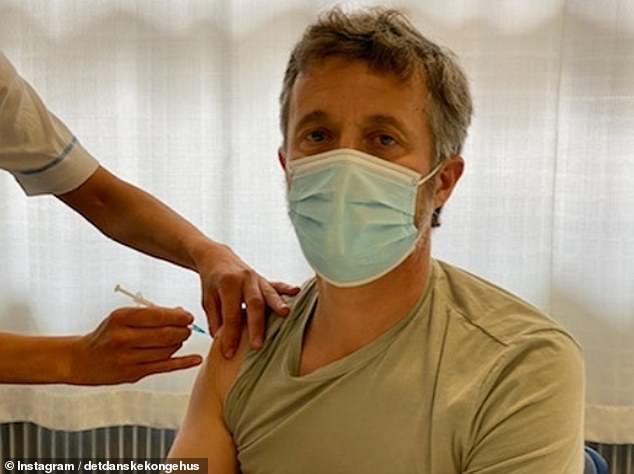 Crown Prince Frederik of Denmark, 52, got the sting and shared a snap on the royal court’s official Instagram page, to drive vaccination efforts, pictured

‘Today I got my first jab. Thank you to all of you who help us on our way to a normal everyday life again,’ Frederik wrote in a post accompanying the picture.

In the picture, Prince Frederik, wearing an olive green t-shirt, looked straight into the camera with confidence as his nurse administered the jab.

While 2.7 million doses have been administered in total, 1.04 million have been fully vaccinated. 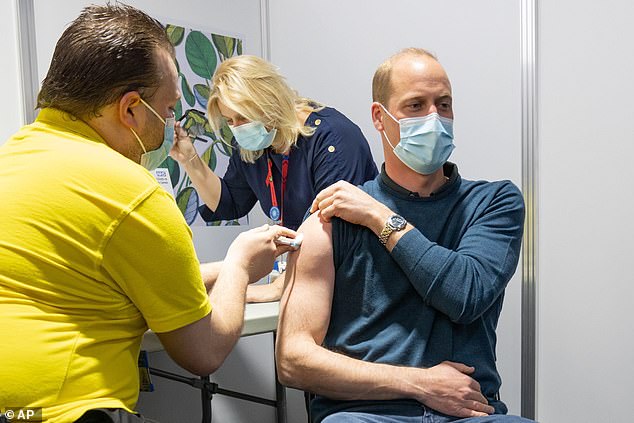 On Tuesday, Prince William, 38, received his first dose of the coronavirus in London, pictured, as more royals move to get the jabs

The Scandinavian country averages 918 new coronavirus cases per day, and in total, it was estimated there were currently 13,066 active cases around Denmark yesterday.

There are plans in place to offer a vaccination passport to its citizens who have been fully vaccinated for socialising.

On May 6, indoor gyms were allowed to reopen on the condition that attendees had a ‘coronapas.’ 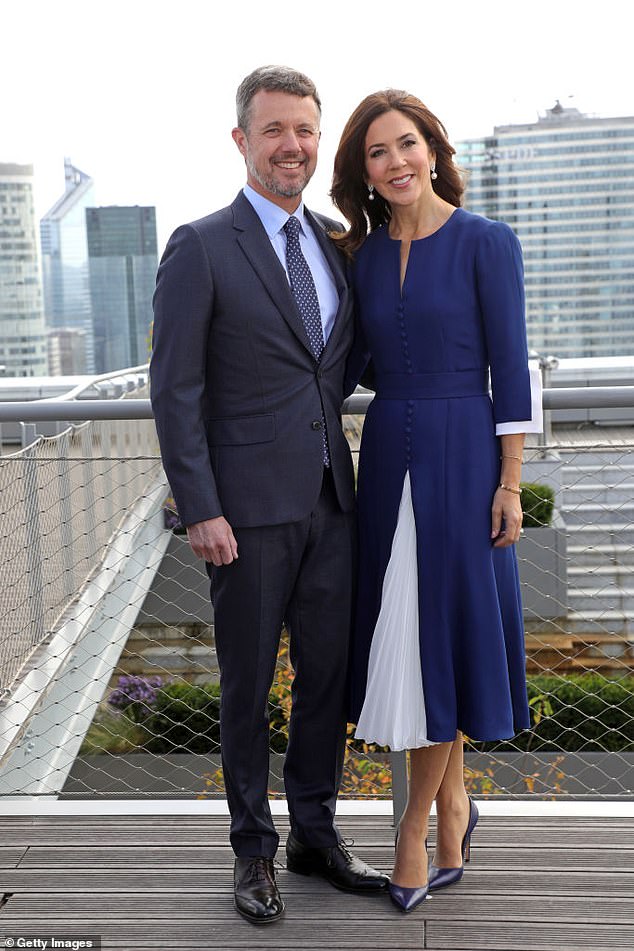 The Danish royal, pictured in 2019 in Paris with his wife Princess Mary, 49, thanked healthcare staff for their hard work

While crucial to make sure no positive case goes undetected in the early stages of the Scandinavian nation reopening, the passport will be phased out by late June, when the country expects to have completely gone back to normal.

Currently, about half a million Danes get tested each day, with all tests being free, and the country should reopen almost completely on Friday, according to the Financial Times.

Workplaces, the public service, universities, sport and music clubs, zoos, theme parks and sauna are all set to welcome visitors again, with only clubs remaining closed for now.

Meanwhile, the Duke of Cambridge caused a stir with a snap showing his first jab.

It was captioned: ‘On Tuesday I received my first dose of the COVID-19 vaccine. To all those working on the vaccine rollout – thank you for everything you’ve done and continue to do.’

As William rolled up his sleeves to have the jab, many people took to social media to praise the father-of-three for setting a good example.

He was photographed being injected by NHS staff at London’s Science Museum, where Health Secretary Matt Hancock was also inoculated.

The image, showing a masked William and two healthcare workers, was shared to the @KensingtonRoyal Twitter and Instagram accounts this morning.

But royal fans couldn’t resist admiring his bulging biceps, with one tweeting: ‘Check out those guns!’

Another remarked: ‘Duke working out! Nice!’ while one commented: ‘Ha ha, I was just thinking he’s looking pretty fit.’