Prince George ‘begged’ Prince William to take him to the England vs Germany game and ‘insisted on wearing matching outfits’, royal expert claims

Prince George ‘begged’ Prince William to take him to watch England play Germany in the European Football Championship, a royal expert has claimed.

The young royal, seven, dressed in a smart suit and tie similar to his father’s, made a surprise appearance alongside the Duke and Duchess of Cambridge, both 39, at Wembley Stadium for the Euro 2020 last-16 clash last week.

It was a big moment for George, who only steps into the spotlight with his parents on select occasions, as he enjoyed his first England game, while his sister Princess Charlotte, six, and brother Prince Louis, three, most likely stayed at home.

Duncan Larcombe has now revealed the little royal was determined to attend the match with his father, telling OK!: ‘George idolises his dad. That’s why we saw him looking so smart in his suit – he really wanted to dress like William.’

It is unknown whether George, who has been described as ‘football mad’, will attend the final Euro 2020 match on Sunday and see The Three Lions take on Italy at Wembley. 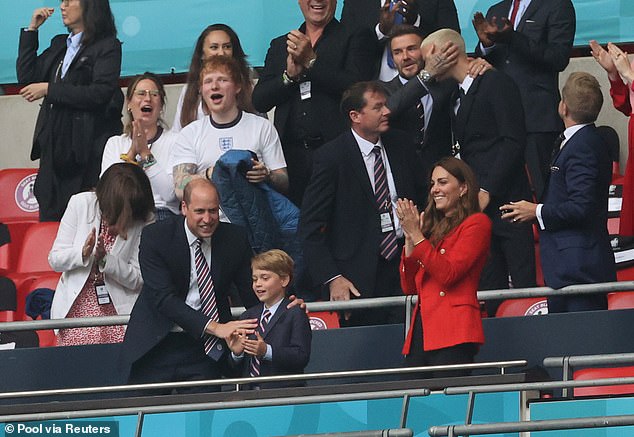 Prince George ‘begged’ Prince William to take him to watch England play Germany in the European Football Championship, a royal expert has claimed

The royal expert said the Duke is George’s ‘hero’, revealing: ‘William would never have normally taken him to the football because it was an official outing in his role as president of the FA, but George absolutely begged to be allowed to come along.’

He said the little royal, who he described as ‘a pretty big character’, ‘twisted his parent’s arms’, adding: ‘That’s why Kate came, so that when William had to meet all the dignitaries, George could stay with her.’

The eldest Cambridge sibling, who shares the same name with the patron saint of England, watched as the Three Lions triumphed over Germany, winning 2-0 thanks to goals from Harry Kane and Raheem Sterling.

After the triumphant game at Wembley Stadium, the Duke and Duchess took to their official Twitter account to praise the team’s ‘incredible performance’. 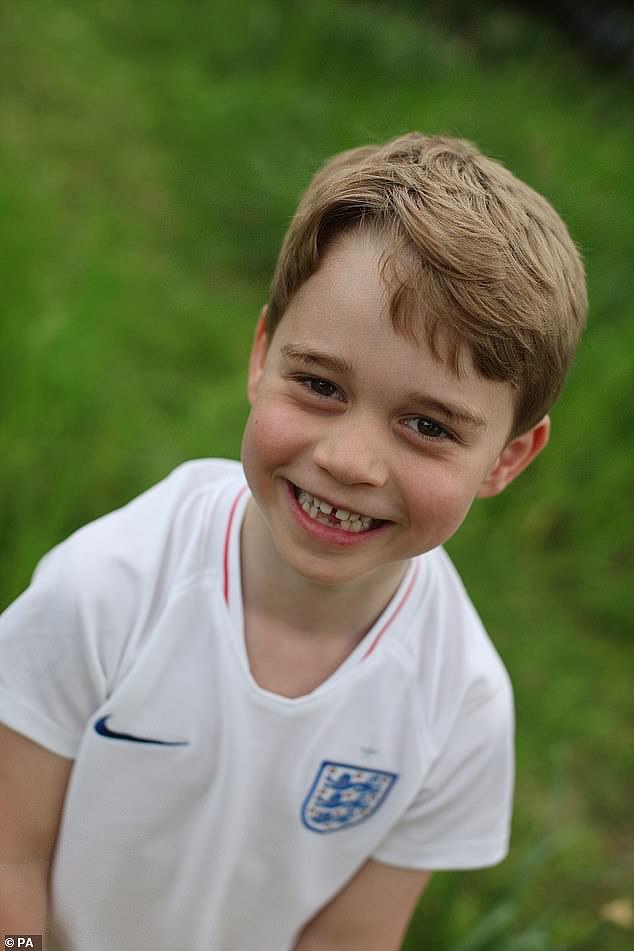 It is unknown whether George, who has been described as ‘football mad’, will attend the final Euro 2020 match, which see’s The Three Lions take on Italy at Wembley on Sunday

At the start of the night young George, who is an avid football enthusiast like his father, amused fans when he mumbled shyly while the stadium joined together with the players to sing God Save the Queen, as some pointed out the song was about his great-grandmother.

For the occasion, George, who was spotted talking to former footballer David Beckham during the evening, donned a smart suit just like his father Prince William, with a similar tie in pink and blue teamed with a light blue shirt underneath.

George attended his first live game with his father to watch Aston Villa play against Norwich City in October 2019.

Then, for his fifth birthday picture that same year, the young prince was photographed in his Three Lions T-shirt by his doting mother at Kensington Palace during the England ‘lionesses’ World Cup campaign. 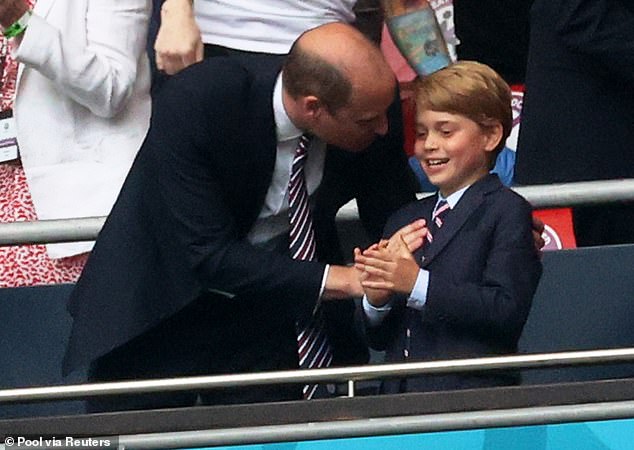 For the occasion, George donned a smart suit just like his father Prince William, with a similar tie in pink and blue teamed with a light blue shirt underneath 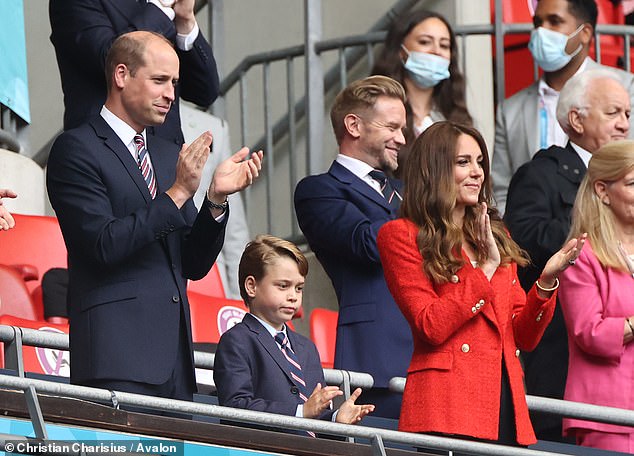 At the time, it was understood to be one of his favourite items of clothing and George could frequently be seen running around the grounds of his home with a football at his feet.

The devoted fan of the game also celebrated his sixth birthday by inviting his whole class at Thomas Battersea to a football-themed party ahead of the end of term in 2019.

In 2020, it was revealed that Prince George played in a local football team during term time, and had again celebrated his seventh birthday with a football-themed party.

Vanity Fair’s royal editor Katie Nicholl had anonymous sources tell her at the time: ‘I wouldn’t be surprised if his birthday has a football theme.

‘George is football crazy and actually a very good player. During term time he plays for a local team and Will and Kate are often there to cheer him on.’