Los Angeles: Britain's Prince Harry and his wife Meghan Markle on Tuesday thanked essential workers and offered encouragement to people who suffered during the 2020 coronavirus pandemic in their first podcast released on Spotify.

The couple's first 33-minute show is part of the deal with the streaming giant worth an estimated $US40million ($52.5m).

The couple, known officially as the Duke and Duchess of Sussex, host the "holiday special" episode, which features reflections and hopes for the new year from singer Elton John, producer and actor Tyler Perry, tennis champion Naomi Osaka and other celebrities. 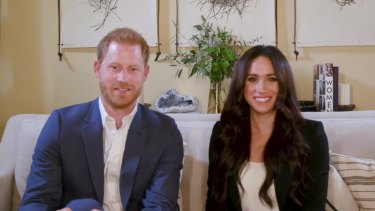 Prince Harry and his wife Meghan signed lucrative multimillion-dollar deals with Spotify and Netflix in 2020. Credit:Time/AP

Meghan also quotes Martin Luther King as she tells listeners that: "Darkness cannot drive out darkness, only light can do that".

Besides the Spotify partnership, the couple also signed a Netflix deal in 2020, to produce a range of programs and series, rumoured to be worth more than $US100 million.

In excerpts released by Spotify, Prince Harry told listeners: '"As we all know, it's been a year. And we really want to honour the compassion and kindness that has helped so many people get through it".

While Meghan added: "And at the same time, to honour those who have experienced uncertainty and unthinkable loss. Our thoughts have been with you, especially during this holiday season.'

The couple thanked healthcare and frontline workers and others who made sacrifices during a challenging year.

"From us, I'll say no matter what life throws at you guys, trust us when we say, love wins," Markle said.

Prince Harry and Markle stepped back from their royal duties in January and moved to Southern California with their infant son, Archie.

Tags: and, Harry, Markle, Meghan, Prince
Recent Posts
We and our partners use cookies on this site to improve our service, perform analytics, personalize advertising, measure advertising performance, and remember website preferences.Ok