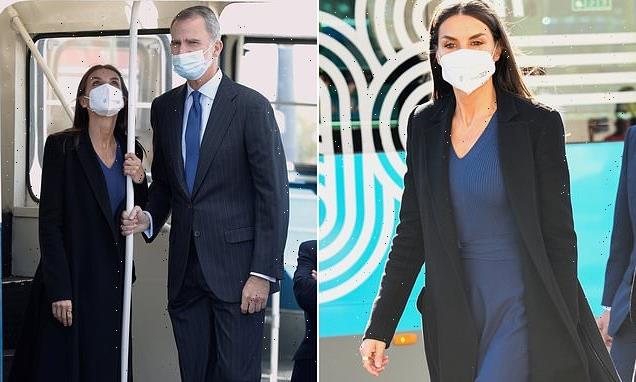 All aboard! Queen Letizia recycles knitted Massimo Dutti dress teamed with a trench coat as she joins King Felipe to mark the 75th anniversary of Spain’s Municipal Transport Company

The Queen of Spain recycled a royal blue dress to mark the 75th anniversary of Spanish Municipal Transport Company today.

Queen Letizia, 49, joined Felipe to mark the anniversary at the company’s headquarters in Madrid, where they hopped on buses and learned more about the history of Spanish municipal transports.

For the occasion, the mother-of-two, who is known for giving a new lease of life to garment she’s worn before, donned a knitted blue Massimot Dutti dress and a black trench coat.

She first wore the dress in June 2020 to visit a cultural centre with Felipe VI, and wore it for a second time this year on World Book Day. 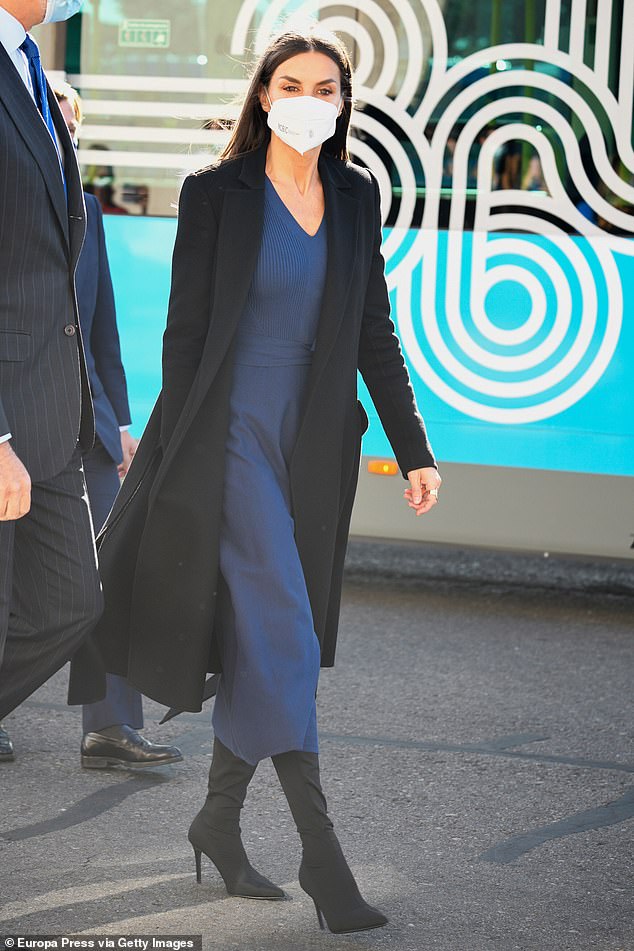 Queen Letizia of Spain, 49, joined Felipe to mark the 75th anniversary of the Spanish Municipal Transport Company in Madrid, where they hopped on buses and learned more about the history of Spanish municipal transports

The stylish dress, with a ribbed knit, donned a tasteful V-neck and long sleeves.

The form fitting number highlighted Letizia’s slender frame with a belt putting the focus on her petite waist.

On previous occasion, Letizia wore the dress during warmer months, and either wore it by itself or with white accessories that fitting the early days of Spanish Summer and Spring.

But today, as temperature have dropped in Spain, she wrapped up in a black trench coat which she kept open, and was wearing black swede boots with a stiletto heel. 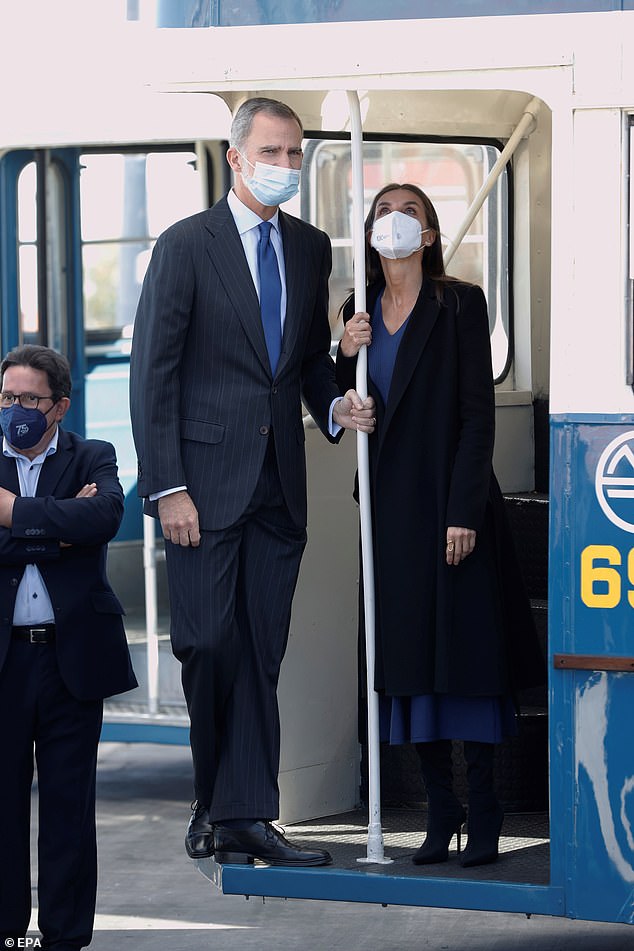 The mother-of-two looked stylish in a blue dress by Massimo Dutti she wore twice before, pictured 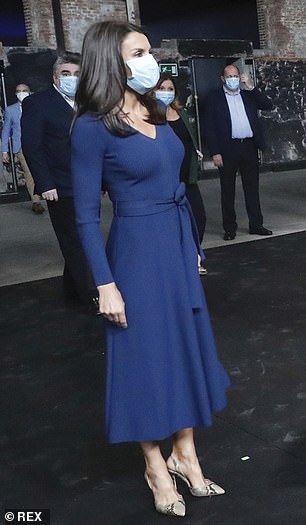 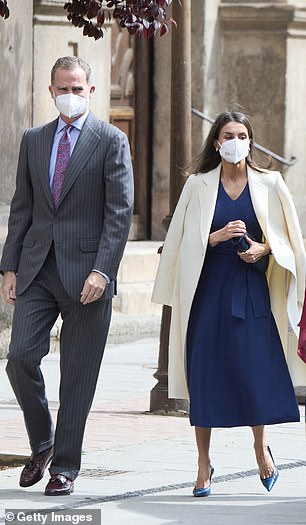 Letizia first wore the dress in June 2020, left, to visit a cultural centre and in April 2021 on World Book Day with Felipe VI, right

Wearing a white face covering, Letizia was donning her signature trait of eyeliner with a cream eyeshadow and a dash of mascara.

She kept her accessories to a minimum, sporting studded 18 carats white gold earrings from Gold & Roses and her favourite ring from Karen Hallam.

She was not carrying a bag,  and preferred to tuck her hand sinto the large pockets of her trench coat.

Her silky brown tresses were styled into a straight blow-dry, with locks tucked behind her ears.

Felipe VI looked smart in a pin-striped dark suit. He was wearing a white shirt, and a blue tied that matched his wife’s dress. 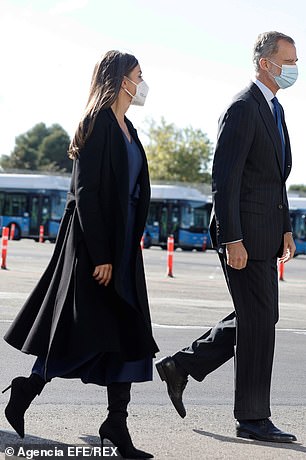 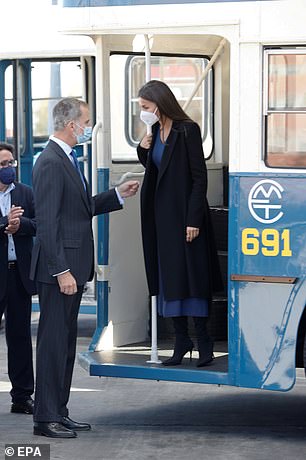 Today, Letizia wrapped up in a black trench coat, which she wore with swede boots. Felipe VI looked smart in a pin-striped suit with a blue tie, pictured 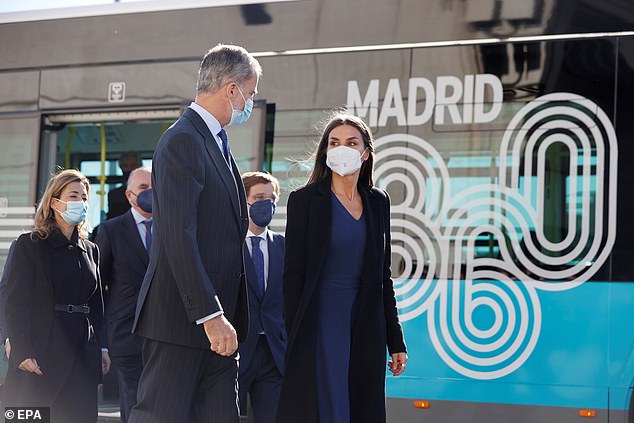 Letizia’s hair was styled straight, and she kept the look simple with a dash of makeup. Felipe VI and her were both wearing face masks

The pair visited the Municipal Transport company and were treated to a tour of its old buses, including a blue and white double-decker bus.

The royal couple hopped on the bus and were seen sitting on the top floor of the vehicle.

Yesterday, they stepped out to enjoy an evening of music in Madrid last night. 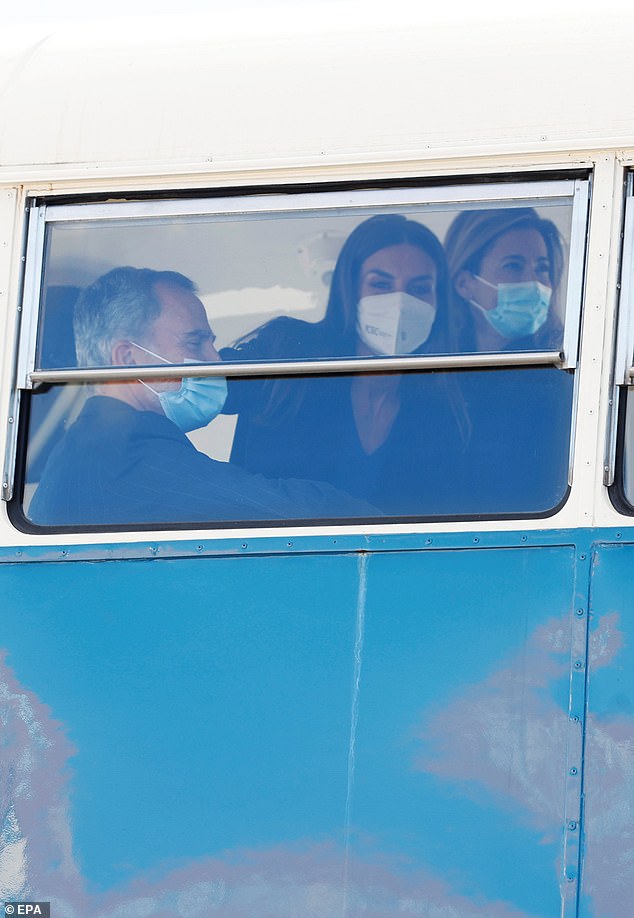 The royal looked in good spirits as they took a seat onboard the blue double-decker bus today, pictured 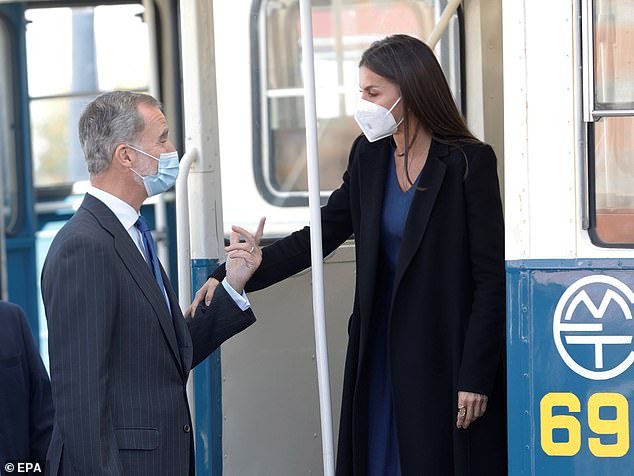 In a rare public display of affection, Letizia gently put her hand on her husband’s arm as they chatted next to the bus, pictured

The Monarchs attended the premiere Of The Opera ‘Partenope’ at the city’s Royal Theater.

For the occasion, Letizia donned a £139 black sleeveless top from Hugo Boss with wide-legged trousers from Carolina Herrera, which she paired with black accessories to achieve the glamorous evening-wear look.

The mother-of-two put on a stylish display with the trendy wide-legged Palazzo trousers from the Spanish designer.

She paired it with a sleeveless top with a high neckline and glittering detail, which she tucked in the trousers to accentuate her petite frame and slender waist. 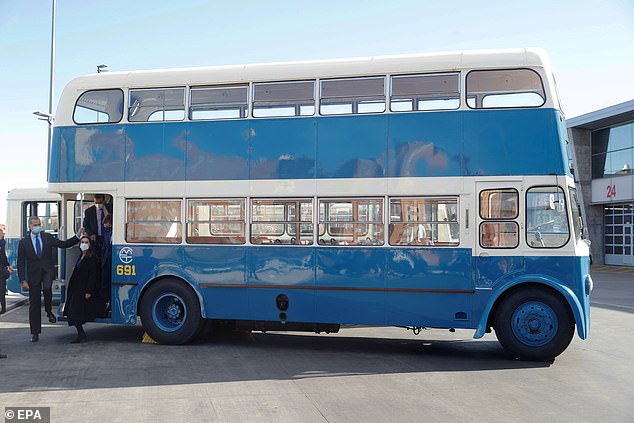 The couple visited the Company’s headquarters and were treated to a tour of its old vehicles, including the blue bus, pictured 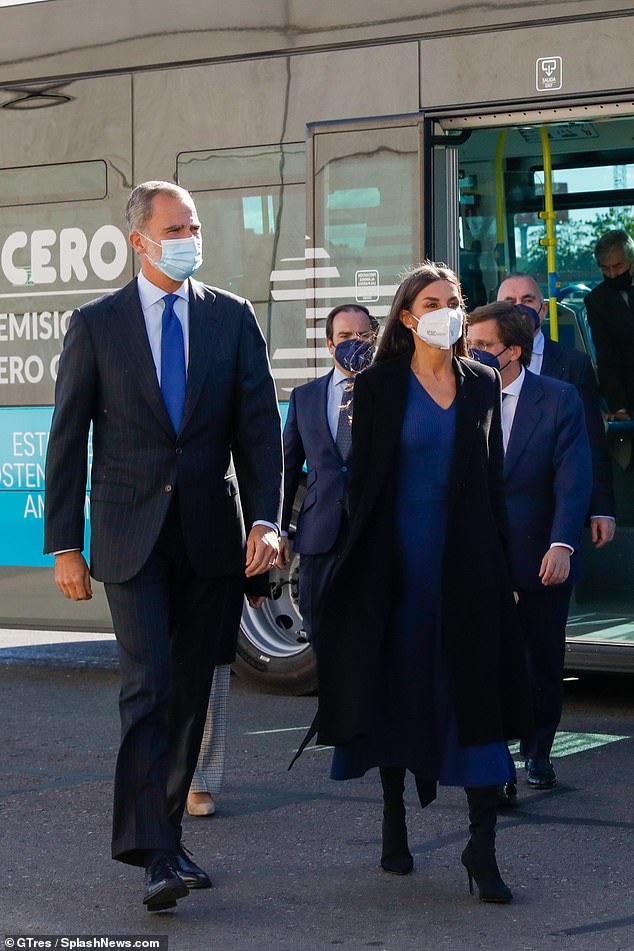 The couple were a stylish pair, with Felipe VI’s tie matching the colour of Letizia’s dress, pictured 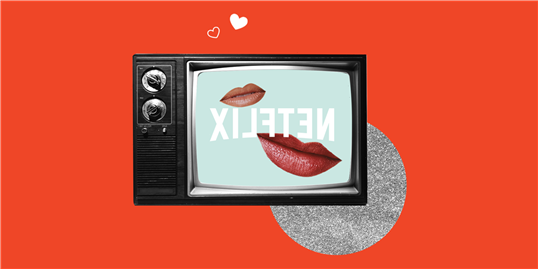