There’s someth-ink missing! Ariana Grande COVERS UP all of her arm tattoos for her wedding to Dalton Gomez – including a Pokemon and two butterflies – but leaves her intricate hand art on full display

Blushing bride Ariana Grande appears to have gone to great lengths to ensure that every detail of her wedding day was perfect – even going as far as to conceal all of her arm tattoos for the special day.

The 27-year-old chart-topper shared the first images from her secret ceremony with husband Dalton Gomez, 25, on Wednesday, sharing a glimpse into her intimate wedding celebration, which took place earlier this month at her $6.75million Montecito home, and was attended by just 20 of the couple’s closest family and friends.

But while the stunning images showcased many sweet details from Ariana and Dalton’s special day – there was several things missing from the photos of the beautiful bride: several of her most famous inkings.

Ariana opted for a strapless white gown created especially for her by famed bridal designer Vera Wang – and it seems that the pop princess wanted nothing to take away from the elegance of the dress, not least the large butterfly and Pokemon tattoos that she had inked onto her left arm several years ago.

Also concealed for the bride’s big day were the Japanese symbols for ‘let’s sing’, which she has inked on her left forearm, just above her image of Pokemon cartoon Eevee, and a drawing of Spirited Away character Chihiro, which is tattooed on the inside of her right forearm. 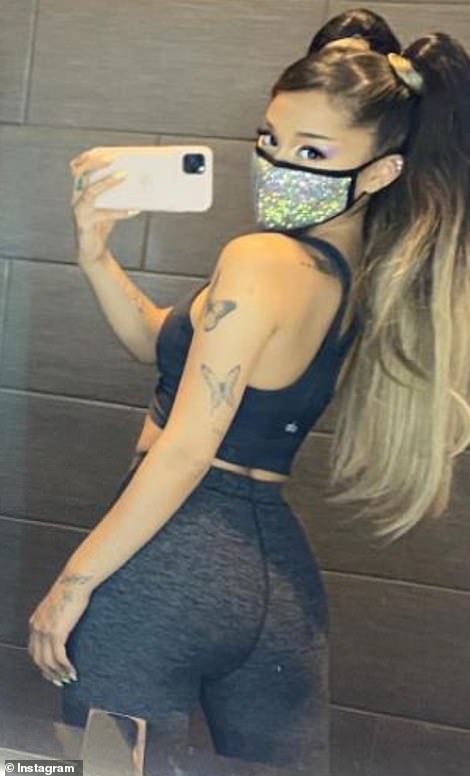 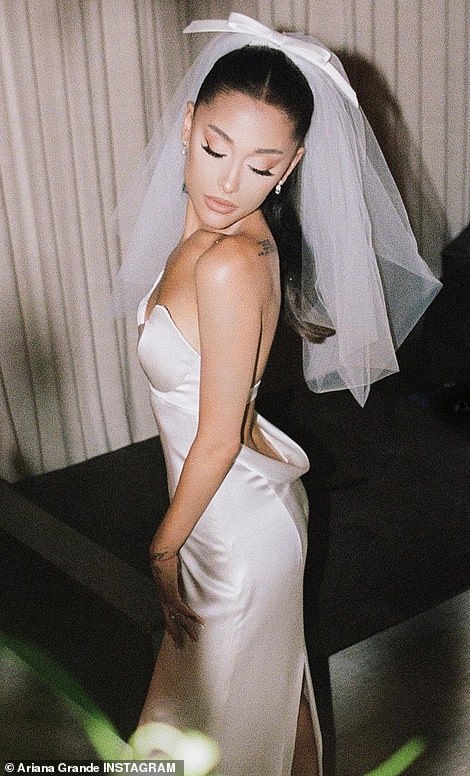 Missing in action: Newlywed Ariana Grande covered up all of her arm tattoos for her wedding to Dalton Gomez, revealing in the first photos shared from the ceremony that she walked down the aisle with completely bare arms 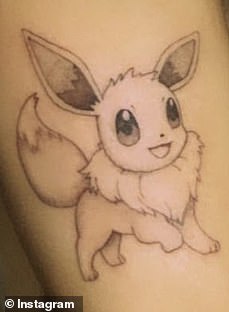 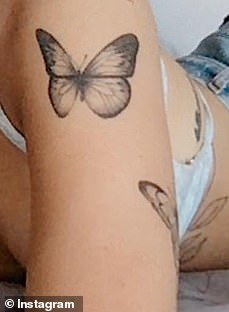 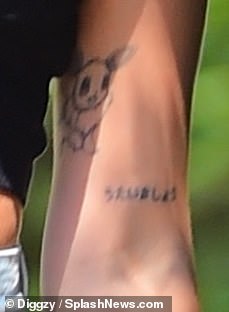 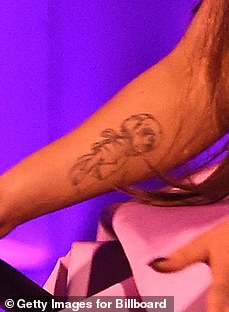 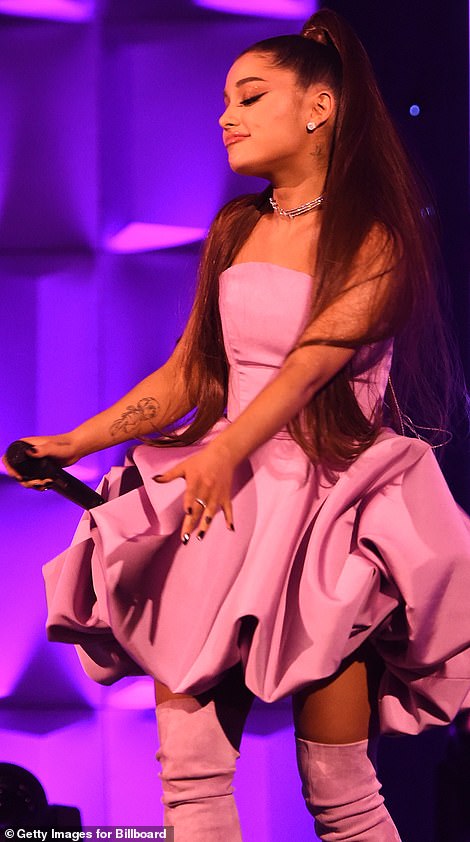 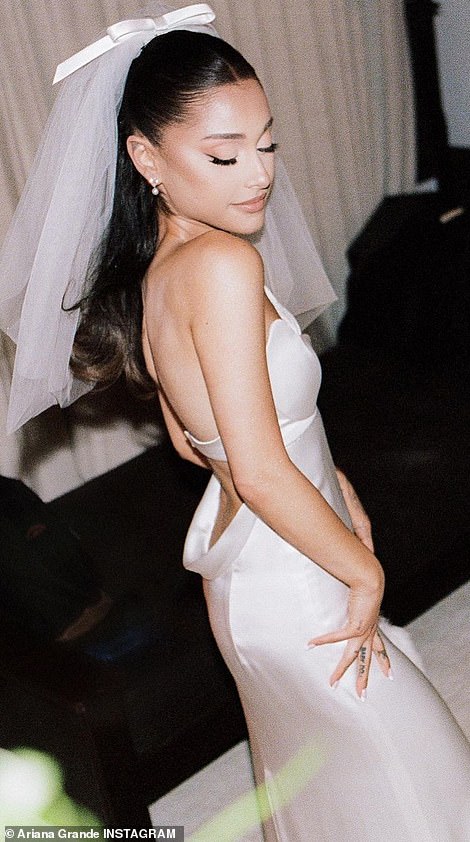 Concealed: Ariana likely covered up all of the body art that can usually be seen on her arms – including Chihiro, which she has inked on her right forearm – with body foundation

It is not known how exactly Ariana concealed the large black arm inkings for her wedding, however it is likely that she asked her glam squad – which included celebrity makeup artist Ash K Holm – to conceal the tattoos using body makeup.

Several big-name brands make full-coverage body foundation that can be used to conceal tattoos; Kim Kardashian’s beauty brand KKW Beauty offers its own option, as do other popular companies, including Westmore Beauty and Tarte.

Ariana’s wedding makeup artist Ash has actually worked with Kim in the past, and may well have opted to use a product from the reality star’s beauty brand as a result.

Interestingly, the popstar opted to leave several of her tattoos on full display – including her many intricate hand inkings, and a large piece of text on her upper back.

The newlywed singer – who got her first body art in 2012, and has since had more than 50 inkings done in various places on her body – has multiple tattoos on her hands and fingers, including a large moon and sun on the back of her left hand, as well as several words written along the inside of her digits.

Her back tattoo, which could be seen in several of the photos from her wedding, is a quote from Jim Carrey’s hit 1998 movie The Truman Show, and reads, ‘In case I don’t see ya: Good afternoon, good evening, and good night!’ which is one of the actor’s most iconic lines from the film.

Ariana, who is known to be a fan of Carrey’s, had the words written upside-down on the upper part of her left shoulder blade back in June 2019.

The idea of things being turned upside-down is an important concept for Ariana, who even incorporated it into her wedding day by wearing a topsy-turvy pearl-and-diamond earring in one ear.

Her poignant piece of bling was created by jeweler Lorraine Schwartz to match Ariana’s engagement ring and was part of a pair, with the other worn the correct way up in the opposite ear.

‘The meaning behind this is significant to Ariana, as it represents appreciating the lowest or the “upside down” moments in her life and how they have contributed to where and who she is now,’ Vogue revealed – suggesting that Ariana may have left her upside-down tattoo on show because of that same significance.

However it is unclear why exactly Ariana chose to conceal her arm art – although it may be that she was worried the large pieces would take focus away from the elegance of her custom-made Vera Wang wedding dress, which left plenty of skin on show.

She wore a traditional white wedding veil, topped off with a stylish and trendy bow.

According to Vogue, Ariana began planning her wedding dress long before she and Dalton ever went public with their relationship; the popstar first asked fame designer Vera to create a custom gown for her at the Met Gala ‘a few years ago’, the fashion publication revealed. 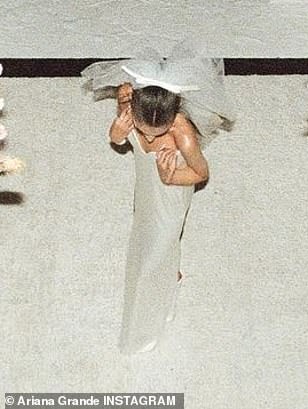 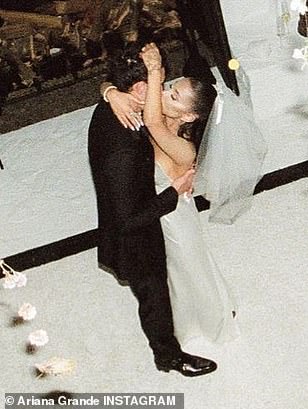 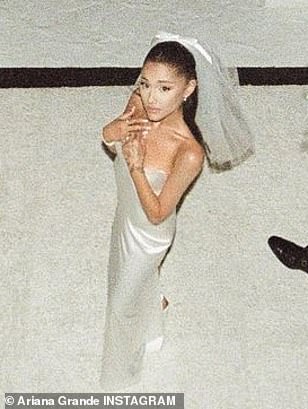 Selective: She also left her many intricate hand tattoos on show for her intimate ceremony – which took place at her $6.75million Montecito home, and was attended by just 20 of the couple’s closest friends and family 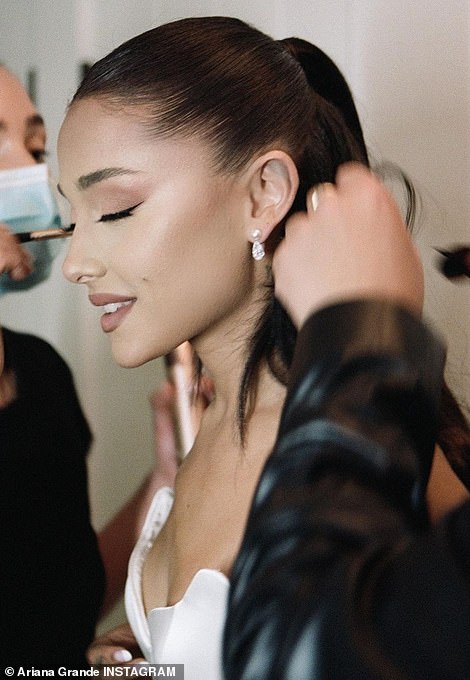 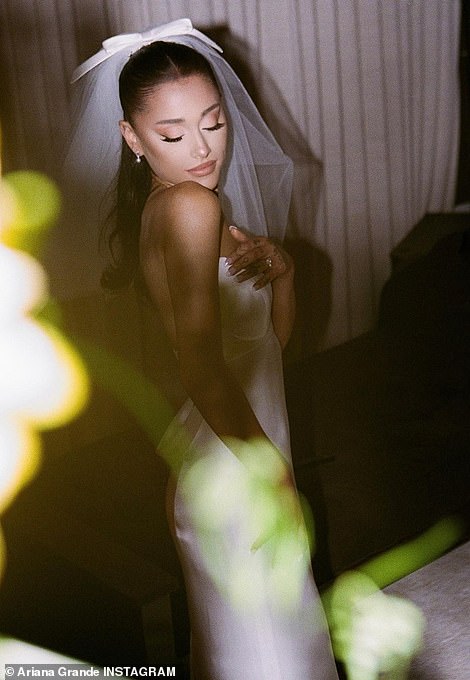 Helping hand? Ariana’s wedding glam squad included celebrity makeup artist Ash K Holm, whom she may have called upon to cover up her arm tattoos with body foundation

‘On fashion’s biggest night, Vera promised that when the time came, she would create Ariana’s wedding day look…and the iconic designer delivered,’ the magazine shared.

But while the dress was undoubtedly showstopping, the heart-rending images of the bride and groom took center stage in Ariana’s Instagram posts, with one sweet snap showing the couple in the midst of a romantic embrace.

Photos also captured the gorgeously decorated space, which was adorned with hanging florals and lit candles.

The images also showed Ariana getting ready for her big day with the help of her glam squad, which included makeup artist Ash and the popstar’s long-time hairstylist Josh Liu.

Despite the monumental occasion, Ariana looked as cool as a cucumber as stylists completed her hair and makeup.

The final look beauty look for the day featured natural, glowing skin, winged eyeliner, and a half-up ‘do that allowed Ariana’s long locks to hang in loose waves around her shoulders – without taking any attention away from her veil and other accessories.

Ariana tied the knot with the real estate agent earlier this month at her $6.75m home in Montecito, California, and had just 20 close friends and family present for the special occasion – including her mom Joan and dad Ed Butera, both of whom walked her down the aisle.

The groom – who wore a suit by Tom Ford – waited for his stunning bride underneath flowers that were suspended from the ceiling, and hung just above the couple as they exchanged their vows, during which they ‘committed to happy ever after, in love forever’, according to Vogue. 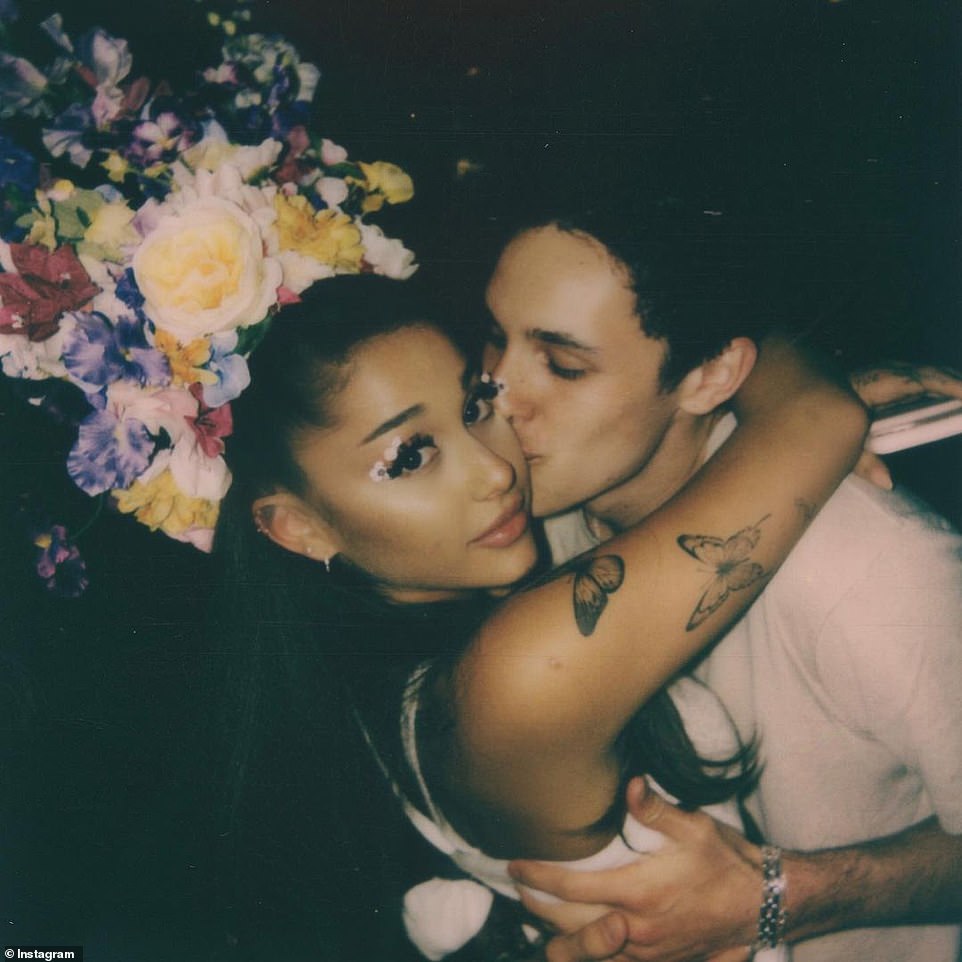 On full show: Ariana’s new husband Dalton (seen together in June 2020) is no doubt familiar with all of her many tattoos, which are usually on display 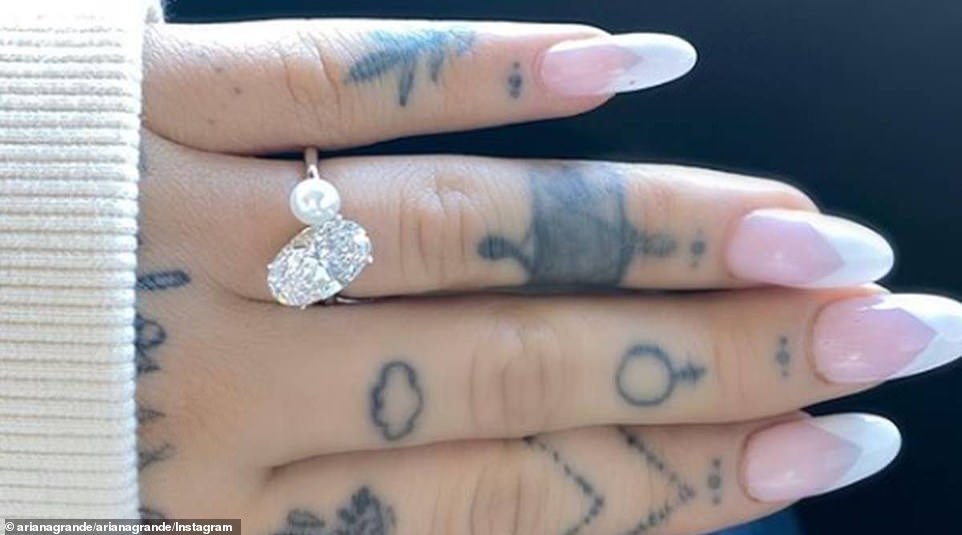 Digits: Her many hand tattoos were even featured in an image that she shared of the pearl-and-diamond engagement ring Dalton gave her when he proposed in December 2020 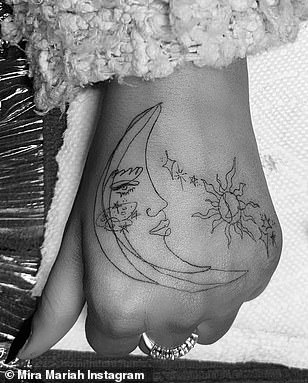 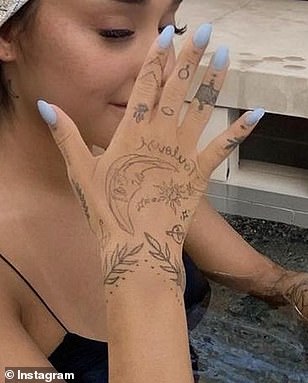 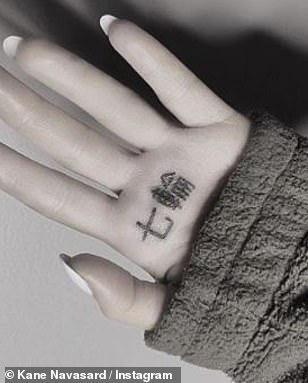 Details: She happily showed off her many hand tattoos during her wedding, including a large sun and moon, which are inked on the back of her left hand. She also has Japanese symbols inked on her palm (right)

It comes after Ariana announced that she was engaged to Dalton in December after just nearly one year of dating.

According to a TMZ source, the ceremony was ‘really just for’ Ariana and Dalton, but it is unclear if it was an impulsive decision, or whether they had planned the big day.

Meanwhile another source has claimed to E! that the pair ‘always wanted an intimate ceremony,’ saying: ‘They decided to have the wedding this past weekend because their schedules are picking up and neither wanted to wait.’

‘They both agreed there was no point in waiting,’ the source said.

‘It was beautiful but not over the top,’ the source said. ‘Ari wanted it to be simplistic and tasteful. All they cared about was having family there and to be able to enjoy the special moment together.’

Ariana and Dalton got engaged just before Christmas, and have been sharing their love for another on social media.

The couple were first linked in February 2020 after she appeared to split from her rumored boyfriend at the time Mikey Foster.

In May that year, the singer confirmed her budding relationship with Dalton, after spending most the pandemic together, as they enjoyed a lockdown dance together at her home for Justin Bieber’s Stuck With U music video.

It was then revealed that they were engaged in December, when Ariana posted a picture of her diamond sparkler along with a caption that read: ‘Forever n then some.’

She was also in a long-term relationship with the late Mac Miller, who passed away from an accidental drug overdose in 2018.