RICHARD LITTLEJOHN: It’s time to take back control from the boffins… the Nepal Variant arrived in the nick of time for ‘the science’, which has been searching for any excuse to keep the pandemic emergency going

Just when you thought it was safe to start planning a summer holiday, along comes the Sherpa Tenzing Variant direct from Nepal.

The Nepalese government insists this new strain doesn’t actually exist, but that hasn’t stopped the scaremongering scientists here seizing upon it to prolong the agony.

Last night the Government decided against expanding the green list of countries considered safe to visit. Portugal was downgraded to amber, meaning that holidaymakers who flocked there thinking it was an oasis they could visit without sanction will now have to quarantine on their return.

Don’t look back in amber, I heard them say.

The Nepal Variant arrived in the nick of time for ‘the science’, which has been searching for any excuse to keep the pandemic emergency going. No doubt there will be a couple more along shortly. Like London buses, Covid variants hunt in packs. 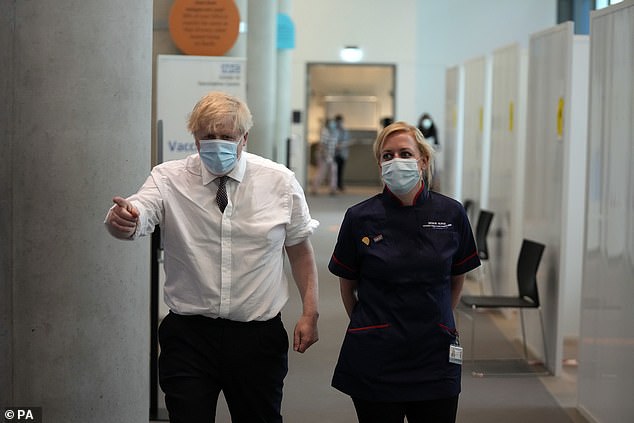 When Boris has been bold, it’s paid off in spades and it’s thanks to his decision to bypass the bureaucracy, we have the most successful and extensive vaccination programme of any major nation

Not that we are supposed to call it the Nepal Variant. Referring to any strain by its ethnic or geographical origin is now considered racist.

You couldn’t make it up.

That hasn’t prevented the French weaponising the Kent version as ‘le variant Anglais’ and banning visitors from the UK. But here in superwoke Britain, we are instructed to use the Greek alphabet to refer to the variants — Alpha, Beta, Gamma and so on.

Stand by for the Enigma Variations, of which there were 14 at last count. That should keep the stage army of lockdown enthusiasts in business for the foreseeable future.

I’ve been warning you for months not to bet your mortgage on all restrictions being lifted on June 21. Boris might be making all the right noises, but when push comes to shove he will defer to ‘the science’.

Politicians throughout the crisis have been content to cower behind the Covid quangocracy. And the members of Sage, Nervtag, Cobra, SMERSH and whatever other fancy acronym they can dream up have no incentive to start pulling on their demob suits any time soon.

The assorted academics running the show have been living the dream for the past year and a half. They’re not about to let go now.

As I told you on Day One, this is their World Cup, their Ashes, their Wimbledon all rolled into one.

They’ve been at the heart of the action, dictating government policy, drawing their full salaries and exercising real power without responsibility. They’ve been feted by radio and TV producers and invited to spout unchallenged their sermons of doom.

Look at, for instance, that couple of experts who turn up on BBC Breakfast every weekend — the scary looking Scottish woman who ensures that her jumper always matches the colour of the bunch of flowers on the shelf behind her and the flamboyant professor with his own radio studio — complete with Covid clock. 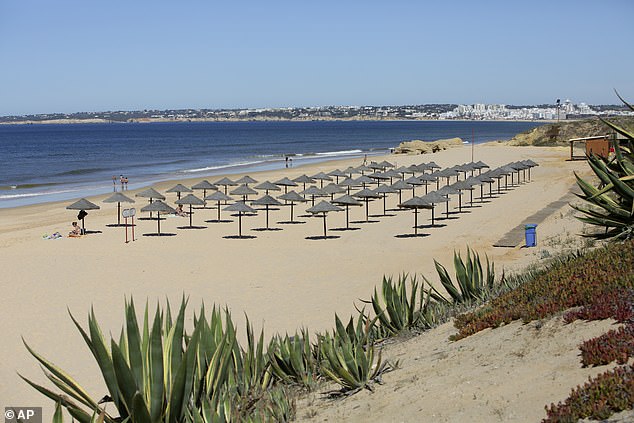 No one is going to convince me that they will give up their gig voluntarily and return to the obscurity of the senior common room, where completing the Guardian crossword is about as exciting as it gets. And, frankly, who can blame them?

Ministers have been happy to abrogate their responsibility, to avoid difficult decisions by claiming to ‘follow the science’.

But we pay politicians to take difficult decisions. We are also supposed to have a Parliament which holds Government to account. Shamefully, with a few honourable exceptions, MPs have been conspicuous by their absence.

Policies have been implemented by ministerial fiat, devoid of proper scrutiny. Why is the Commons chamber so sparsely populated now that just about everyone who may be at risk has been vaccinated? There’s no justification for MPs continuing to hide behind masks and plastic screens, while sitting 6ft apart.

They should be setting an example to the rest of the country and embracing a return to normality.

Left to ‘the science’ there never will be an end to this nightmare. They’re pursuing an unattainable Zero Covid policy. It’s time for Parliament to call a halt.

They can always find another reason to reintroduce lockdown and restrict foreign travel.

Fortunately, the people are ahead of the curve, casting off the shackles with abandon. While the politicians and the experts dither, the rest of us have decided the game’s over. The sun has got his hat on and caution is being cast to the wind. As Springsteen might have put it:

But everybody’s out on the beach this week, there’s no need left to hide.

When Boris has been bold, it’s paid off in spades. Thanks to his decision to bypass the bureaucracy, we have the most successful and extensive vaccination programme of any major nation.

More than 30 million people have had both jabs and have nothing to fear from the Nepal Variant or any other variant for that matter. We should be free to travel where on earth we like. Time to tear up the green list, the amber list and, yes, the red list. We’re perfectly capable of assessing the risks for ourselves.

And if you do travel to a red list country and don’t fancy shelling out two grand to spend a fortnight banged up in a hotel when you come back, just make your way to Calais and hire a dinghy.

If Sage, or Nervtag, or any of the rest of the scientists start squealing in Greek about the Alpha or Omega Variants, Boris should reach for the NATO phonetic alphabet and tell them to Foxtrot Oscar.

After the RAF announced a zero-carbon emissions policy a couple of weeks ago, I joked about the likely range of electric-powered fighter jets.

Given the MoD’s dismal track record on procurement they’d be dropping out of the sky long before they reached their target. Now we learn the Army is also experiencing teething problems with a new £3.7 billion fleet of tanks, which can’t travel safely at more than 20mph.

I’ve heard of caterpillar tracks, but this is ridiculous.

Heaven help us if we have to fight another war with this kit. Still, if the tanks are ever called upon to resist an invasion, they’d be limited to 20mph in town, like everyone else.

No doubt someone is already working out how to bring in a £15-a-day congestion charge on the battlefield. Apparently, the tanks vibrate so violently that crews are restricted to a maximum 90 minutes inside and they can’t fire cannon on the move.

The hunt for red top October

The ‘ring of steel’ is always the the first story filed by reporters covering major summits, conferences and English football fans abroad. True to form, we are already reading about specialist divers, underwater search teams and patrol boats rehearsing for next week’s G7 in Cornwall.

I was reminded of the aftermath of the 1984 Brighton bombing, when no formal gathering at the seaside was complete without tight security. The following year I was in Blackpool for some conference or another. There were reports of snipers, plain clothes marksmen, even an alleged Special Boat Service patrol offshore to prevent a seaborne attack by the IRA. All impossible to disprove. 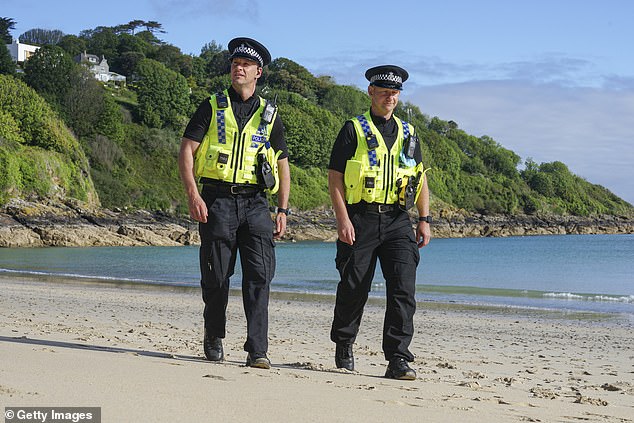 Police officers patrol on the beach in front of the Carbis Bay Hotel, host venue for the G7 Summit conferences

Not to be outdone, one tabloid reporter decided to claim there was a submarine off the end of the pier. The next day his newspaper sent up a photographer from London to capture an exclusive picture.

After several hours lurking on the prom with a telephoto lens, the snapper gave up and repaired to the pub.

‘Where the hell’s this submarine then?’ he complained to the hack who had written the story.

The clue’s in the name, he was told. It’s a submarine.

Zeitgeist update. Police report that a 16-year-old boy was among the increasing number of victims of upskirting — the practice of taking intimate photos up someone’s skirt or dress. 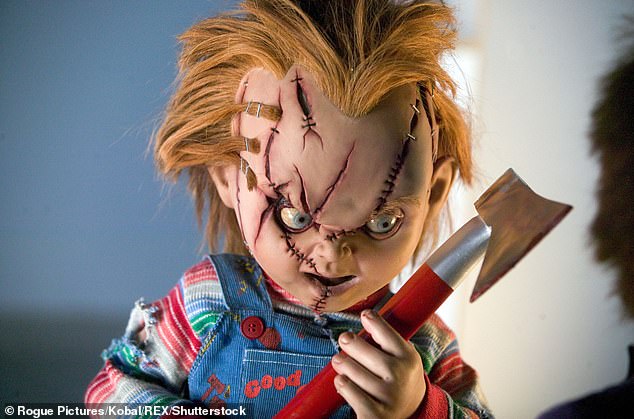 Difficult to square the surgically enhanced Britt Ekland with the beauty fondly remembered enjoying phone sex with Michael Caine in Get Carter. I understand actresses of a certain age feel the need to maintain their allure. But who goes to a cosmetic surgeon, gives him fifty grand and says: ‘Make me look like Chucky’?