Australia will send a team of doctors including an infectious diseases expert to Papua New Guinea and consider fast-tracking vaccine supplies for the country as it battles an out-of-control coronavirus outbreak. 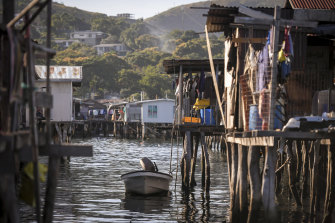 An Australian Medical Assistance Team will be deployed to PNG within days after the country reached out to the Morrison government for help.Credit:Eddie Jim

Queensland Premier Annastacia Palaszczuk warned the surging COVID-19 cases presented “a real risk” to Australia, saying she had “major concerns” the virus could spread into her state and the Pacific nation needed more vaccines.

“Some 500 tests, 250 positives,” Ms Palaszczuk said. “So one in two people. That’s quite extraordinary and quite concerning when it’s right on our doorstep.”

There have so far been 2083 confirmed cases and 21 deaths in the country but testing rates have been relatively low. There are concerns the virus could be spread on Tuesday as large gatherings are expected for the funeral of the country’s first prime minister, Sir Michael Somare.

With Port Moresby’s general hospital at risk of overflowing with coronavirus patients, an Australian Medical Assistance Team (AUSMAT) will be deployed to PNG within days after the country reached out to the Morrison government for help.

The team, to be sent by the Department of Foreign Affairs and Trade, will include two clinicians and an infection control specialist. Aid experts say it is not nearly enough to stem the outbreak.

According to senior government sources, a wider support package will be considered by federal cabinet’s national security committee on Monday night. This would include getting vaccines to frontline health workers as soon as possible.

Australia has already committed more than $60 million to PNG’s COVID-19 response and $144.6 million for its vaccine rollout.

PNG, which has sourced 200,000 AstraZeneca doses from Australia and 70,000 from India, is currently not expected to get its first COVID-19 vaccines until next month at the earliest.

Australian Foreign Minister Marise Payne has been in close contact with PNG’s Minister for Health, Jelta Wong, in recent days to discuss how Australia can respond to the escalating crisis.

Jonathan Pryke, director of the Lowy Institute’s Pacific islands program, said the situation in PNG was worsening by the day.

“A small AUSMAT team, while welcome, isn’t even close to the response that is needed,” he said.

“With the funeral of Michael Somare on Tuesday, and the absolute necessity for any major intervention be PNG instigated and led, my hope is that it’s just a short delay ahead of more announcements this week.

“At a minimum we need to get every healthcare worker vaccinated immediately, with whatever logistical and medical support it takes to make that happen.”

The call for extra support comes as a report reveals Australia’s aid groups last year played a critical frontline role in the region to help stop the spread of the virus during the first wave.

The report by the Australian Council for International Development, to be released on Tuesday, shows Australian NGOs reached 2.9 million people across 41 countries as they quickly pivoted their support programs towards dealing with the outbreak of COVID-19.

Australia, the United States, India and Japan committed over the weekend to jointly manufacture and distribute up to 1 billion COVID-19 vaccine doses before the end of next year, with the Morrison government contributing about $100 million towards helping distribute the jabs.

ACFID chief executive Marc Purcell said PNG needed a support package that included a target of 1 million vaccines by the end of the year and the immediate deployment of 20,000 vaccines and personal protective equipment for frontline health workers. He said there also needed to be a mobilisation of a “mass communication campaign to counter vaccine hesitancy in the nation”.

“Make no mistake, we are racing against the clock to prevent a catastrophe. Increasing reports of full morgues, deaths in settlements, PPE shortages and hospitals threatening to shut down are dire,” he said.

“The international community must get behind PNG in their time of need. If ever there was a time to dig deep and ‘step-up’ in the Pacific, it’s now.

“Australia’s existing support and additional deployments of assistance are a step in the right direction, but we must grasp the scale and urgency of the situation and its potential to become a catastrophic disaster for both nations.”