The police association has warned the state government against imposing a “ring of steel” around Melbourne should it lift coronavirus restrictions from regional Victoria, calling last year’s road blocks a flawed strategy blighted by loopholes.

As authorities ponder their next steps after the state’s outbreak grew by 11 cases to 51 on Monday, police association secretary Wayne Gatt said it was his strong view that police checkpoints on every main road in and out of Melbourne should not be repeated. 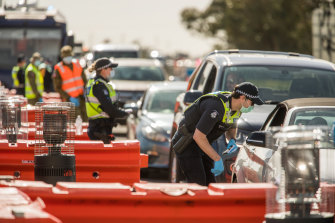 Instead, Mr Gatt suggested mobile police checks on both freeways and smaller roads as a superior approach that would be like “breath testing on steroids”, where the looming threat of being caught by a roving police officer would deter those considering breaking the rules.

“Last year’s model was not effective, nor was it efficient,” Mr Gatt said. “Our advice in debriefing that operation to both Victoria Police and the state government has been clear: if in the future government policy required some form of separation to be policed, there are much better ways of doing it that are far less labour intensive and far more effective.

Hundreds of police staffed Victoria’s “ring of steel” for about four months last year when Melbourne was under tighter restrictions than the rest of the state. Checkpoints on freeways around Melbourne’s perimeter stopped drivers to ask if they had an essential reason to travel and turned them around if they did not. 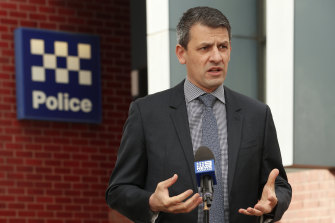 Asked whether a ring of steel was being considered again, Chief Health Officer Brett Sutton said it was “too early to speculate”.

“Look, it’s all to be determined as we go through a review of the situation day by day. It’s not out of the question, it’s not locked in,” Professor Sutton said.

Sources familiar with the government’s deliberations confirmed to The Age that a ring of steel was being discussed as of Monday. Acting Premier James Merlino said last week a statewide lockdown was required because of the handful of regional exposure sites and the possibility coronavirus had already spread outside Melbourne.

Regional mayors and opposition MPs have also called for the regions to be treated differently to Melbourne, with the Victorian Liberals’ deputy leader Cindy McLeish telling The Age that it was “pretty tough to keep kids away from school and people from work when the closest exposure site is 300 to 500 kilometres from your town or city”.

The scepticism from the police association, which is the police officers’ union, throws into doubt how the Victorian government would enforce a two-tier restrictions system.

Mr Gatt said between 600 and 1200 police officers were working in hotel quarantine and he estimated about 800 would be required to maintain a ring of steel.

Police stations that were forced to close earlier this year due to resource shortages have since reopened but Mr Gatt warned police were “arguably overstretched already”, highlighted by highway patrol officers being called in to work at an anti-vaccination protest in Melbourne on Saturday.

The police association secretary said people subverted the ring of steel by leaving Melbourne via back roads last year and checkpoints were often shut down for the day when it was raining.

“Our members’ experience was 99.9 per cent of people that came through checkpoints were doing the right thing,” Mr Gatt said. “Many were essential workers trying to get to hospitals, school teachers going to school. It wasn’t an ideal situation for us and it certainly didn’t service the needs of metropolitan Melbourne or the regions.”

“Coupled with a visible and mobile presence on that boundary of Melbourne, you wouldn’t know when and where you were going to be stopped.”

Police Chief Commissioner Shane Patton told a parliamentary inquiry in February that “a couple of days” would be needed to set up a ring of steel and it would not have been worthwhile to do so during Victoria’s five-day lockdown that month.

“So you’re talking two or three days in before you have capacity to then start in effect locking down,” he said in February. “So you have to weigh up the benefits and the pros and cons of doing so, versus what was anticipated to be a five-day lockdown.”

Victoria Police and the state government have been contacted for comment.