Revenge is a dish best served cold but Seven's Sunrise executive producer Michael Pell says he has been far too busy working out how his team will cover the Oscars rather than cooking up something for his rivals at Nine's Today show. 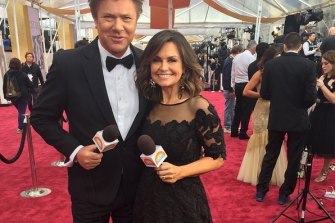 In 2018, Sunrise entertainment reporter Edwina Bartholomew found herself covering the Academy Awards from a Hollywood rooftop far away from the action after she was "shafted" from gaining access to the all-important red carpet. 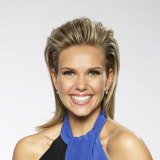 Sunrise showbiz reporter Edwina Bartholomew was banished to the rooftops after falling foul of the Oscars red carpet rules.

At the time, rival network Nine, which was the official telecast partner of the Oscars, denied it had lobbied organisers to have the rival Seven reporter banned from the red carpet, which she had covered previously, beaming her live crosses back to the Sunrise studios.

However, the bad blood has not been forgotten and this year the tables have turned.

Seven is now the official telecast partner for the Oscars in Australia, and whispers are that non-rights holders – which means veteran showbiz reporter Richard Wilkins from Today and Angela Bishop from Ten's Studio 10 – may no longer be welcome on the celebrity-infested ruby pile.

Nine had largely turned a blind eye to Bishop and Ten, not considering them competition for Today, but Bartholomew and Sunrise were an entirely different matter.

PS learned on Friday afternoon that Wilkins is no loner going to the Oscars while Today showbiz reporter Brooke Boney and Bishop are waiting to hear if their applications for red carpet accreditation will be granted for the Awards, set to take place on February 10, our time.

Even if they are given access, it is expected they will be forced to adhere to strict rules governing how and what they can cover on the carpet, down to how many seconds they are on air.

As for what plans Seven has for the event, given it now effectively "owns" the red carpet, Pell kept details under wraps, although at least one of Sunrise's hosts (most likely Samantha Armytage) will be frocked-up and on the carpet. 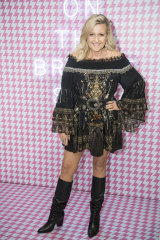 "We're really excited to be the official broadcaster this year. The Oscars are a perfect fit for Sunrise and we'll be unveiling our full coverage plans very soon," Pell coyly informed PS, laughing off any suggestion he was hatching plans for revenge, which will likely catch Bishop in the network cross-fire.

Networks pay from $US75,000 for a segment to $US500,000 for a full show covering the red carpet, while those simply covering it gathering small items are limited to no more than five-minute segments.

"For years no one bothered to time what the other guys were doing. If there is no one to time how long they are broadcasting back in Australia, then there is no way the Academy will find out … someone has to log it and make a formal complaint," one network executive told PS.

Pell denied he would be using a stop-watch and monitoring his rivals during this year's coverage.

In 2018, Nine news boss Darren Wick told TV Tonight: “My view on that is pretty black and white. They’re not a rights-holder. In the words of Barnaby Joyce: ‘Bugger off.’ 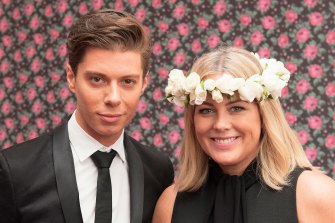 “If Nine Programming has paid for the Academy Awards, then my expectation as Head of News is our guys should have premium access on the red carpet. If we are exclusive rights holders – which we are – we’re in a position to block the other guys, fine. Do it.”

The almighty God of Thunder Thor and an Asian martial arts superhero named Shang-Chi are not only wreaking havoc on villains across the universe but also within Sydney's television production companies, leaving some of the biggest names on the small screen homeless. 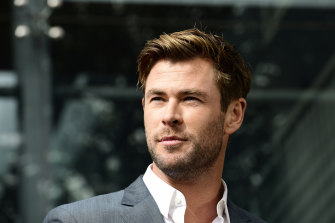 Fox Studios, which is now owned by Disney following the Murdoch family off-loading its entertainment business in a multibillion-dollar deal last year, has been booked out for the next three years solid to produce action films from the Marvel franchise, which is also owned by Disney.

Marvel Studios counts both Thor and Shang-Chi among its alumni, the latter seen as a key character that could help increase the franchise's wider appeal across the huge Chinese market.

Now, while that is good news for Sydney's comic hero enthusiasts, it is bad news for show's such as Nine's The Voice, Ten's Dancing With The Stars and Seven's upcoming Big Brother, which have all had to find an alternative after finding no room left at Fox's Moore Park complex. 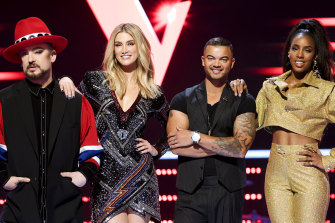 Swivelling again: Boy George, Delta Goodrem, Guy Sebastian and Kelly Rowland are all returning as coaches on The Voice in 2020.Credit:Nine

"There just isn't enough space in Sydney any more, it really is a crisis. And even beyond Sydney, the Gold Coast is booked up for Baz Luhrmann's Elvis film for at least the next 12 months, it really is a crisis and people are having to think creatively about how to create these shows," one TV executive told PS.

Add to that an increasing amount of local television production from streaming services such as Stan and Netflix, and the squeeze on studio space is only getting tighter.

After filming at Fox Studios facilities for several years, The Voice set has been moved and is currently being constructed inside a vast warehouse at Moorebank.

Rather than being 15 minutes away from their city hotels while shooting at Fox Studios in Moore Park, the VIPs are now faced with "enduring" two-hour commutes between filming sessions, which can last up to 12 hours. 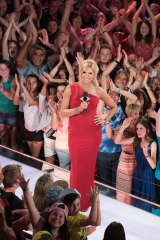 Producers are concerned the longer commutes will blow out already tight filming schedules.

For Channel Ten's Dancing With The Stars, production has had to move out of Fox Studios and is now back to Melbourne where the show was created when it aired on Channel Seven.

The new series of Big Brother, which is set to debut on Seven later this year as part of the network's reach for a younger audience under the leadership of CEO James Warburton, is set to be shot inside a giant shed at North Head.

The show's former host Sonia Kruger jumped ship from Nine to return to Seven where she will host the rebooted version of the show; PS revealed last year the numbers were being crunched to build the elaborate set at Fox Studios but Marvel's ambitions put an end to that.

Big Brother will no longer be broadcast as a live show as it had been before, and will be edited in a similar fashion to the other crop of reality television shows currently on air, which simplifies the actual production logistics somewhat.

Big Brother had originally been shot in a specially built studio/house at Dreamworld on the Gold Coast, but the facility – which had fallen into a state of disrepair – burnt down after an arson attack last year.

For years, it was one of the glittering junkets on the corporate gravy train: an all-expenses-paid ticket to the annual G'Day USA love-in where those favoured – and compliant – reporters could rub shoulders with the likes of John Travolta, Nicole Kidman, Kylie Minogue, Olivia Newton-John, Margot Robbie, Geoffrey Rush, Rebel Wilson, James Packer, Mariah Carey and – for many years – our former foreign minister-turned-red carpet prancer Julie Bishop.

However, PS hears the plug has been pretty much pulled on this year's event, the corporate largesse – largely sponsored by Qantas – having dried up.

Officially the airline says it is putting its resources into the bushfire recovery, though for years critics – PS included – have questioned the actual merit of the event.

Organisers of the annual gala in Los Angeles say it will happen again this year, just on a smaller scale. And while Travolta will be there once again, it remains to be seen who else is going to show up.

What's a Bombshell between friends? 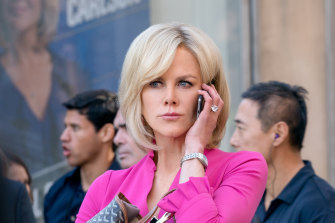 Now, given the rather unflattering depiction of the corporate culture that thrived at Fox under the watch of Rupert Murdoch and his sons Lachlan and James, the film will certainly give Kidman much to discuss when she next catches up with her good friends, the Murdochs.

Indeed, PS’s long-time readers will recall Kidman is godmother to Murdoch’s two youngest daughters, Grace and Chloe, and was present, with her husband Keith Urban, at their lavish baptism in Jordan. 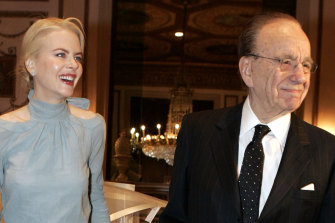 But even more perplexing is how Kidman allowed the actors portraying Rupert, Lachlan and James Murdoch to have such dodgy accents.

Malcolm McDowell certainly looks like Rupert, but his accent is almost cockney. Ben Lawson, who plays Lachlan Murdoch, sounds like Steve Irwin. James Murdoch, portrayed by Josh Lawson, is practically mute, though his character's lips are the subject of one of the more unsavoury quips delivered by dirty, old man Ailes – brilliantly played by John Lithgow – at the start of the film, which will no doubt leave a quite a sting within the real-life media family. 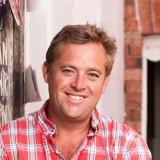 A spanner was thrown in the works behind the scenes on lifestyle show Better Homes & Gardens when it came to announcing the much-watched program's new lineup, following PS’s revelations that it had come at the expense of resident green thumb Jason Hodges who was "gutted" after being dumped from the show.

As PS revealed, rival green thumb Charlie Albone is set to join the BH&G crew, but he is still under contract to rival network Foxtel where he appears on Selling Houses Australia.

Foxtel boss Brian Walsh confirmed negotiations were under way with Albone about releasing him from his contract, but as it currently stands Seven has been unable to announce Albone was joining the network, or feature him in any new promos for the show until his contract situation was resolved. 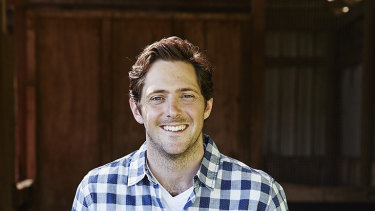 Contractural issues: Landscaper Charlie Albone is destined for Better Homes & Gardens, he just cant legally so it … yet.

PS hears Albone will be on the show when it returns to air on February 7, though he has also shot an entire series of Selling Houses for Foxtel, meaning he will appear on the competing networks concurrently. Talk about awkward.