The sign over the entrance to Walt Disney World’s Magic Kingdom in Orlando, Florida, says, “Here you leave the world of today, and enter the world of yesterday, tomorrow and fantasy.” On the park’s reopening day, July 11, that fantasy world took on a different meaning: a world where a pandemic doesn’t exist.

Walt Disney World has been closed since March 15 after COVID-19 forced many businesses, theme parks included, to pause operations. But this month, as Florida’s cases surged, the company moved forward with a summer reopening. On July 12, the day after Magic Kingdom and Animal Kingdom opened their doors again, Florida had its highest single-day infection rate with 15,300 new cases. Epcot and Hollywood Studios opened three days later, on July 15.

Disney has been heavily criticized due to concerns that this is potentially putting many at risk, but spokespeople and local authorities maintain that the park’s safety protocols are stringent enough to keep cast members, employees, and guests safe. Governor Ron DeSantis recently extended Florida’s state of emergency for another 60 days but has downplayed the risks of coronavirus spread when it comes to Disney World. “Disney, I have no doubt, is going to be a safe environment,” he said in a press conference earlier this month. Jerry Demings, the mayor of Orange County, Florida, which includes Orlando, has said he “won’t hesitate” to ask Disney to reconsider if evidence shows that the park is tied to a rise in COVID-19 cases.

Given the uncertainty of coronavirus and its spread, all of this could easily change at any moment. 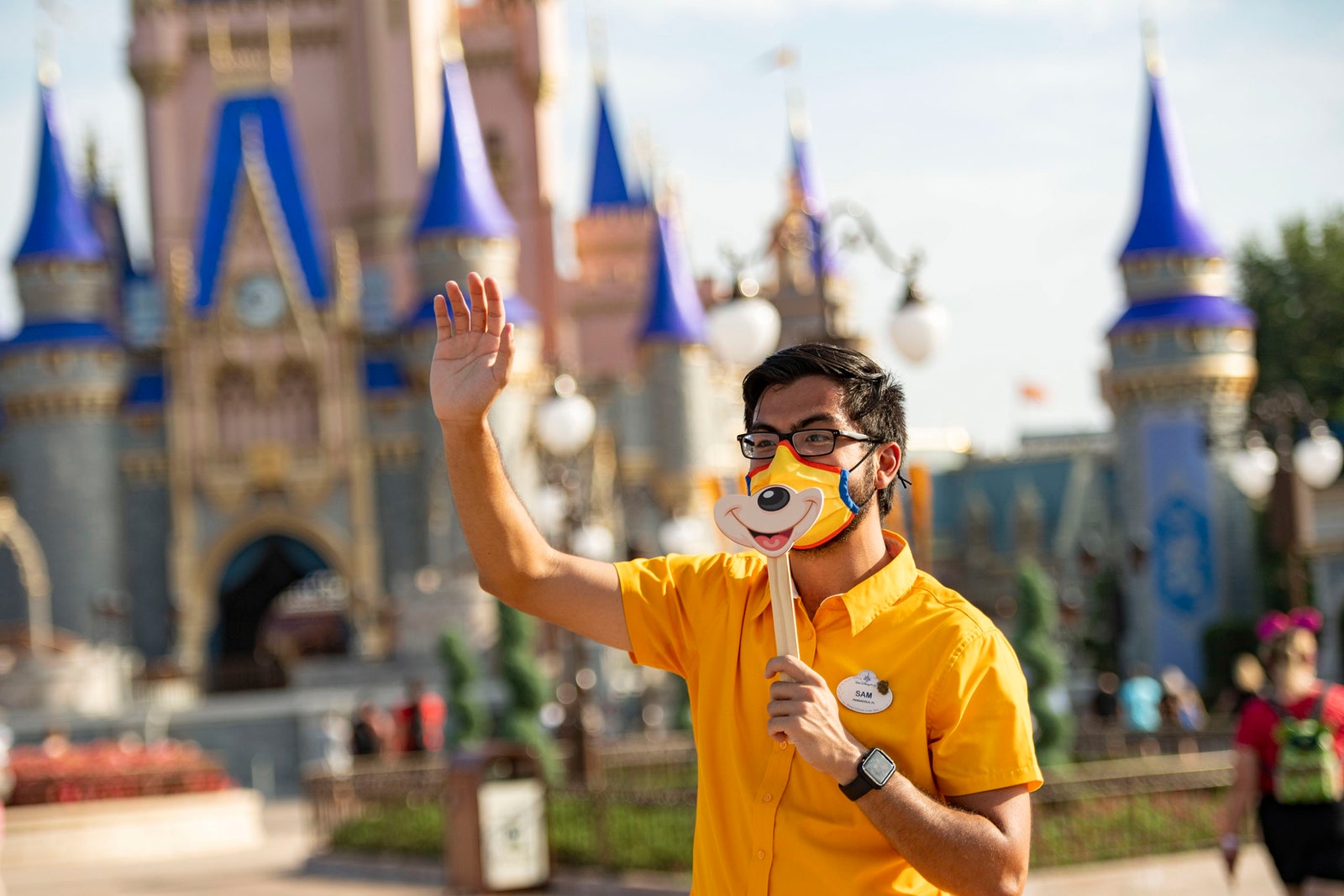 The risks did not stop many Disney superfans—myself included—from being there. I’ve been a journalist covering Disneyland and Walt Disney World for many years; the closure was a historic event in Disney World's history, and it felt important to me to be present when the park reopened. That said, I made my plans before Florida became the new epicenter of the pandemic in America. I was concerned about traveling to Florida, naturally, but I decided to go forth, trusting that I would stay as safe as I possibly could. And once I was on the property, I was relieved to see the safety protocols put into place. Masks are mandatory everywhere, social distancing markers were clear and easy to follow, and an impressive amount of hand sanitizer and hand-washing stations were available across all the properties.

Let me be clear: There is absolutely a risk in visiting the park right now, and I am not encouraging anyone to go. I wanted to see what the “happiest place on earth” looked like when it reopened for the first time in nearly four months, as safely as possible. Others felt the same—and here are some of their stories.

“When my husband and I got married earlier this year, we walked out to ‘Happily Ever After’ [Editor’s note: This song plays during the nightly Magic Kingdom fireworks show]. We were here on the last day the parks were open before the pandemic, and now we’re back for reopening day. I cried like a small child when I went in! We were nervous about coming with the spike in cases, but I am beyond impressed. It feels safer here than at the grocery store. I’ve always felt that Disney people are such nice people. There’s something about Disney fans that keeps you lighthearted—I always say people need a little Disney in their life.”

Jewel: “This is our first time in any of the parks, period. I figured opening day would be less people, and they’d cater more to me.”

Precious: “With coronavirus going on, [I think] you should still not let it ruin your life. Just take your precautions and go have fun.”

Jewel: “You could be walking down the street and get killed. You never know.”

“I’ve been coming to Disney since I was one. It’s always been part of my family and always been a part of me. When the park shut down, it was kind of upsetting. I wanted to come back to experience the magic. To me, it almost feels like the first day Walt built the park again. It’s that excitement level. It just makes you emotional, it makes you want to be here. You can’t see everyone smiling, but you know they’re smiling.”

“There are two reasons I came to the reopening, really. One is personal. My husband and I love Disney, and this is such a lovely feeling of returning to normal. We really wanted to take advantage of being here when the crowds were smaller. We don’t even care if we do that much; we just wanted to see what it looked like. The second side of it is that I’m in the events industry. Within a lot of theater, travel, and large-scale events, everyone is looking to see what Disney does.”

“I just got engaged recently. My fiancé and I were actually in town for his cousin’s wedding, so we decided to come because it was going to be our best chance to make it. Opening day just seemed like the best time.”

Sheri: “Where else would we want to spend our birthdays?”

Vicki: “Where else would you want to be? I love Disney.”

Vicki: “I feel safer here than I do in the grocery store.”

As news about the novel coronavirus pandemic rapidly evolves, Glamour is committed to bringing our readers the most accurate and up-to-date facts. As a result, information in this story and others like it may change, and we will update when necessary. For the most recent news about COVID-19, please visit the CDC, the WHO, and your state’s Department of Health.

Tags: Disney, web
Recent Posts
We and our partners use cookies on this site to improve our service, perform analytics, personalize advertising, measure advertising performance, and remember website preferences.Ok