Sheryl Underwood confessed to still feeling ‘trauma’ on the first episode of ‘The Talk’ back since controversial co-host Sharon Osbourne resigned.

The hosts of The Talk opened their first episode back from their month-long hiatus by addressing the elephant in the room. “It’s time for an episode of The Talk that will be unlike any other we’ve had before,” co-host Sheryl Underwood said at the top of the April 12 show. “As you may know, during our break, Sharon [Osbourne] decided to leave The Talk. We need to process the events of that day and what happened since, so we can get to the healing.”

Sharon, 68, resigned from The Talk amid controversy over an outburst she had about race on March 10 aimed at Sheryl. On the new episode, co-host Elaine Welteroth started by praising Sheryl, who admitted to feeling lasting “trauma” over the incident. “First of all, I just want to acknowledge you, Sheryl, on air for you handled that situation. I think it’s really important that people know how much strength and willpower it takes to maintain that kind of composure in that situation,” Elaine said as Sheryl appeared to tear up. Elaine and the other women — Carrie Ann Inaba and Amanda Kloots — applauded her bravery.

With the help of diversity and inclusivity expert Dr. Donald Grant, the women analyzed the incident. Sheryl confessed that she felt “trapped” in her conversation with Sharon, immobilized by fear that she would seem like “the angry Black woman” if she lashed back. “And it’s difficult to go back to that day, because I feel trauma. I feel fearful. I feel apprehensive. I thought I was talking to a friend and someone I could trust,” she told Dr. Grant. Elaine said that she, as a Black woman, felt that she would be labeled “angry” too if she tried to intervene with Sharon — “someone who wasn’t listening and went off the rails with disrespect.”

In March, Sheryl had suggested on air that Sharon defending Piers Morgan after he said he didn’t believe Meghan Markle‘s accounts of racism in the royal family could be construed as racist. Sharon exploded, talking over Sheryl and demanding to know “how could I be racist?” The conversation continued after the commercial break and got even more heated, with Sharon raising her voice and telling Sheryl to not “cry.”

Sharon apologized with a statement on Instagram and vowed to “do better.” After CBS said they were launching an internal investigation and put The Talk on hiatus, Sharon was hit with allegations of racism, including from former co-host Holly Robinson Peete. CBS announced on March 26 that Sharon, who had hosted the show since 2011, opted to resign amid their investigation. They also denied Sharon’s repeated claim that she was “blindsided” by producers by the line of questioning, and thus reacted defensively. 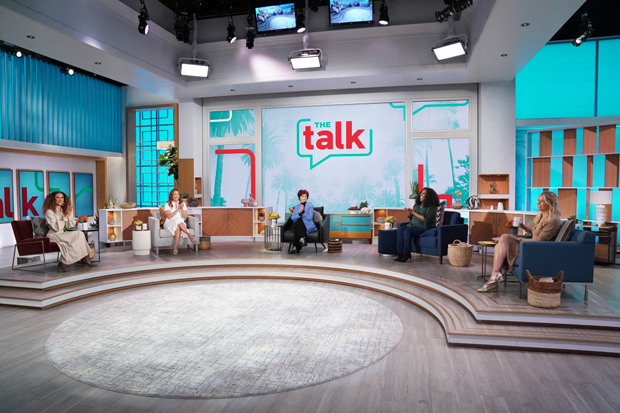 Sheryl confirmed that she and Sharon have not talked since the March 10 incident. While she noted that Sharon texted her, Sheryl said she did not respond because of the internal investigation. “I want to clear something up. I have not spoken to, or have any phone calls from Sharon. There were texts to me that were coming during the internal investigation,” Sheryl told her co-hosts. “I have not spoken to Sharon, I have not had a phone call from her.”

But, if she saw Sharon out and she “greeted me warmly, I would accept. When you’re friends with somebody, you stay friends.” Sheryl’s hope is to move on from her trauma. “I’m nervous, but I’m ready.”