Dr Russell, a principal adviser to former treasurer and prime minister Paul Keating during the 1990s recession, said the coronavirus crisis had shown the need for premiers and chief ministers to get more involved in the economy rather than relying on the federal government. 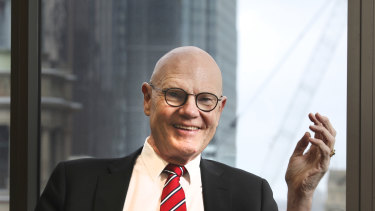 Dr Don Russell was an adviser to Paul Keating during the 1990s recession and is now chairman of AustralianSuper.Credit:Ben Rushton

"Traditionally economic management has been seen as a federal matter but … because so much of the virus response was focused on state responses, the premiers will be required to take responsibility for how their state comes out of the recession on the economy side," Dr Russell said. "I suspect there will be a lot of pressure on the states."

State and territory governments choosing to take a hard line on border closures at the expense of local industries, such as tourism, would be expected to financially support the sectors harmed by their decisions, he predicted. In particular, he referred to Queensland, where the tourism industry significantly contributes to the state's income and tough border restrictions are in place.

"Whatever happens [going] forward, it's inevitable that the Queensland government will feel that they have a special responsibility to [help] the Queensland tourism industry," Dr Russell said.

Tourism Minister Simon Birmingham warned in August state and territory governments would have to rely on their own budgets to help local businesses should interstate border restrictions remain in place for longer than necessary while Deputy Prime Minister Michael McCormack called this week for state governments to prioritise infrastructure projects to help the recovery.

The different state approaches to opening for business during the pandemic have been a source of frustration for the federal government.

Dr Russell said the recovery effort would see the states and territories under further pressure to come up with initiatives to build and strengthen their economies, particularly as they had control over planning laws and land releases.

"Because of the elevated role of the premiers [in handling the virus], there will be natural involvement of all the states and premiers trying to kickstart particular infrastructure programs and also looking after industries in their state that are particularly important to them and which are impacted the most."

However, he warned financing these big projects would be a point of tension, with state government coffers struggling and the federal government focusing its financial strength on supporting households and businesses through the worst of the downturn.

"Most of the problem with the states is they don't have any money [and] … at the moment the Commonwealth doesn't have much money either," he said.

NSW Premier Gladys Berejiklian said this week unnecessary border closures by other states were exacerbating the downturn and reducing the amount of GST being collected.

Dr Russell said this would mean looking for funding through other sources, such as superannuation.

"In the situation where the states have a great opportunity to be the drivers of projects, to try and cobble together funding which comes from conceivably some of the Commonwealth, bits from the state and then they've got a lot of scope to assemble funding from outside sources."

Treasurer Josh Frydenberg in June urged super funds to take a bigger role in the economic recovery by helping fund major infrastructure projects, but the industry warned without policy certainty around the superannuation guarantee increase it was more difficult to back long-term projects.

Industry Super Australia recently revealed plans for a $33 billion investment pipeline over the next five years with the potential to create hundreds of thousands of jobs and has been jostling for social housing project deals with state governments.

Tags: bigger, Role, Should, States, take
Recent Posts
We and our partners use cookies on this site to improve our service, perform analytics, personalize advertising, measure advertising performance, and remember website preferences.Ok