ESPN’s Stephen A. Smith apologized on Monday for saying that baseball superstar Shohei Ohtani can’t be the face of Major League Baseball because the player prefers to have an interpreter around to help translate his native Japanese to English.

The longtime sports host known for his blunt personality made what many viewed as a xenophobic remark on the network’s “First Take,” where he told on-air sparring partner Max Kellerman that the Los Angeles Angels player’s language barrier “contributes to harming” baseball.

“This brother is special, make no mistake about it,” Smith began. “But the fact that you got a foreign player that doesn’t speak English, that needs an interpreter, believe it or not, I think contributes to harming the game to some degree when that’s your box office appeal.”

Smith added that the face of Major League Baseball “needs to be somebody like Bryce Harper, Mike Trout.”

He added that Mark McGwire “saved baseball” in the 1990s because he was someone “you could put on Wheaties boxes, that could ingratiate himself with the younger generations out there and have America transfixed on the sport of Major League Baseball.” (Harper, Trout, and McGwire are all white, native-born Americans.)

Having an interpreter “comprises the ability for them to ingratiate themselves with the American public,” Smith said.

Ohtani currently leads the MLB in home runs (33) and posts a 3.49 ERA on the mound, according to ESPN, making him one of the league’s most successful two-way players in decades ― something even Smith has acknowledged, calling him today’s Babe Ruth.

The 27-year-old will have a strong presence on Tuesday’s MLB All-Star Game after being voted the American League’s starting designated hitter and, as of Monday, the starting pitcher. 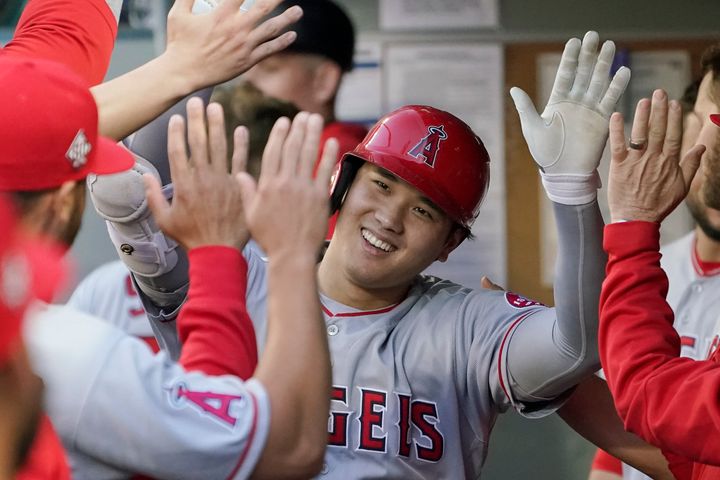 In 2017, Ohtani signed with the Angels and moved to the U.S., where there is no official language. He has preferred to speak to the media through an interpreter who can translate his Japanese to English.

“When you talk about an audience gravitating to the tube, or to the ballpark, to actually watch you, I don’t think it helps that the No. 1 face is a dude that needs an interpreter so you can understand what the hell he’s saying, in this country,” Smith insisted.

Kellerman tried to reframe Smith’s comments while still agreeing that Ohtani should learn more English: “I think the language barrier in every sport, not just baseball, it’s useful to learn the native tongue of the vast majority of most Americans.”

Moderator Molly Qerim Rose closed the segment by saying Ohtani’s home runs “are doing plenty of talking for me,” and that it’s “very difficult to learn a second language.”

While not fluent in English, Ohtani can speak the language, as well as Spanish. His fellow players told the Los Angeles Times that they don’t care how fluent his English is.

Later Monday, Smith tweeted a video attempting to explain his on-air comments, saying that “when you’re a superstar [in the United States], if you could speak the English language, guess what, that’s going to make it that much easier … to promote the sport.”

Soon after recording the video, Smith posted another tweet in response to the backlash over his remarks.

“Amazing that folks still don’t know me after all these years. If I am wrong about something, I will apologize. Especially if I unintentionally offend ANY GROUP of people ― because it’s the right thing to do. Period! I’m BLACK. I would know!”

Critics pointed out that Smith was targeting Ohtani ― and in turn, Asian and other foreign athletes ― for not being  “American” enough, a common experience for Asians in America.

Baseball is not just part of the culture in the U.S., but one of the most popular sports in Japan, a country that won the first two editions of the World Baseball Classic. Ohtani is the latest in a line of Japanese players to play professionally in America, following in the footsteps of Ichiro Suzuki and Hideki Matsui to eventually sign with an MLB team.

About two hours after his previous tweet, Smith issued an apology.

“As I’m watching things unfold, let me say that I never intended to offend ANY COMMUNITY, particularly the Asian Community ― and especially SHOHEI Ohtani, himself. As an African-American, keenly aware of the damage stereotyping has done to many in this country, it should’ve elevated my sensitivities even more,” Smith said in a statement.

He added that Ohtani “is one of the brightest stars” in sports and is making a difference “as it pertains to inclusiveness and leadership.”

“In this day and age, with all the violence being perpetrated against the Asian Community, my comments ― albeit unintentional ― were clearly insensitive and regrettable. There’s simply no other way to put it,” Smith’s statement continued. “I’m sincerely sorry for any angst I’ve caused with my comments on First Take this morning. Again, I am sorry. And I’ll happily reiterate these words more extensively tomorrow morning, as well.”

When reached for comment, ESPN referred HuffPost to Smith’s apology.